It seems to me that Pink paths connect LiftExits and JumpSpots - but that's just looking at one map.

Some paths turn white when right clicking a pathnode and, in other cases, just white directional arrows appear - what does that mean?

It would be an idea to include a key to path colours in the documentation for the 469 patch.
Top

Time ago I asked someone about some comprehensive documentation for whatever assets - not really written with details. As you see, history is repeating and here we go to testing and deducting because letters are costing money and then a document goes an expensive thing for writing...

Those are "special" if I can call them like that. They do connections without taking in account plain reaching options having reachFlags 32, R_SPECIAL. Creatures with intelligence Level under BRAINS_Human are discarded here.

Let me hunt a PathNode in a simple map (I think I have one...

) and I'll track what line changes color and what does this means...
Edit: Captured.
When you are selecting a PathNode or something else certain lines are going lighter. These lines changing their colors are "Paths". When I'm using word "Paths" I'm talking about array with variables Paths[16]. These are reachSpecs going OUT of current selected node not those coming TO this node.
More explained, this node is the START of reachSpec which is just lighted during Node selection. Of course a reachSpec is a structure having more data... but this data is not shown anywhere except DescribeSpec function which won't show "Size" and if is a PrunedPath known by friends as "ShortCut" where physics conditions based on environment are accepting navigation in spot for certain pawn.
reachSpec has:
- Index - an INT value which is a sort of "Name" for this reachSpec - This index is found in one of Paths[x] variables for Node which is the Start, and in one of upstreamPaths[x] variables from Node which is the End - this is what I see and how do I work with them.
- Start - Actor Navigation Point;
- End - Actor Navigation Point;
- CollisionRadius - Pawn's Path User max Radius;
- CollisionHeight - Pawn's Path User max Height;
- reachFlags - Movement capabilities required for this path;
- bPruned - Invisible in Editor - a shortcut reachspec getting over other two.
Did I miss something ?

227 feature - reachSpec's index changes and all reachspecs indexes need to be remapped in navigation chain when one of them has been deleted - that stuff can be compiled normally without any hacks, out of issues.
Remapping Navigation chain (after removals or adds) in exchange... needs some crapped hacks, and then 227 can work in a network already done, but this doesn't means that we cannot create manually an entire network using a more or less hackish builder - no prunes, please, I hate them... Yes, Paths Build or Paths Define commands can be entirely substituted by a human user in here. Advanced users which know what to do have a major advantage when it comes to take control over the network. 469a has nothing here when it comes to manual corrections, even if an extra builder could do some C++ things and it should be capable to do these in XXI century.
Top

Another information, I'm not sure if it needs to be written or not in 469 document or generally in UT technical assets, maybe in whatever tutorials with regard to pathing data for these "masked" reachSpecs. I won't write more before showing a log (I wrote something one hour ago...):

First time actor is checking combos - all data is revealed by XC_Engine. As result:
Lift Combos have reachFlags 32 Distance 500 - hard-coded/defaulted this way and Collision smaller than... that common 70 specified in UnPath.h - it's why BIG ones less brained have NO ACCESS.
Teleporters are a bit less limited - ReachFlags 32 Distance 100 - hard-coded as well but... Collision is BIGGER than I expected - but useless as long as not all creatures can gain access with their intelligence.
And then, now I know that my customs 115 × 110 which I wrote doable in 227 do not have problems as long as UT uses even 150.
WarpZoneMarkers are also Big ones but still reachFlags 32 and Distance 100 - addressing intelligent creatures.

MH Hint: Titans modified to BRAINS_Human might use paths in style blind teleporters because they are fitting into Collisions. Of course, compiling new teleporters will require a clean Editing Mode and not with original MonsterHunt.u file loaded (ignore "information" written in MH tutorials) or else compilation will fail.

Off-Topic:
What did I do with these logs ? ReachSpecs are lowered at "reachFlag" data for granting access even for low brained creatures - this is XC_Engine not plain UT... and then only XC servers can be a true war zone in all the way (Yeehaaaw !!!). Changes are happening before InitGame so future delayed hacks can take place out of issues. These are Run-Time changes not Editor - Editing such things are available so far only in 227...
Top

Looks like the same (or similar) issue as that reported here https://github.com/OldUnreal/UnrealTour ... /issues/51
Top

i think patch only compatible with 436+

If anyone having pallete issue, please post map and the screenshot.

It's not the issue of compatibility, it's to be sure the compiler is putting the right palette in order cuz in other version of the game it is different when it is being compiled. Right now trying to make sure a lot of things match up.
For example, version 400 have a different one than v436. 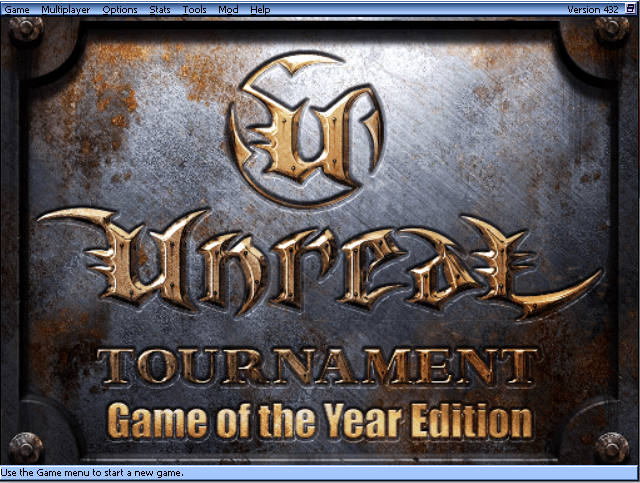 I said you need to post the map name.

To be fair he did - you missed it


If you need it, it's this one (despite the zip name it is Incinerator1b)
ctf-incinerator.zip
You do not have the required permissions to view the files attached to this post.
Top

To be fair he did - you missed it


If you need it, it's this one (despite the zip name it is Incinerator1b) ctf-incinerator.zip

And I did missed it. Often time I get too tired and just go do a few thing and still missed this. My bad. Alright will take a look at it tomorrow. wee

Just to note that the mod Defence Alliance doesn't work with 469 at the moment. The error is the same as that for Weapons Factory and so should be fixed in the next 469 release (see the relevant GitHub issue for WF).
Top

What is wrong with DXT in unrealed? So I make a PNG texture with transparency. Importing it as DXT2 24 bits + 8bits transparency works well. However, if I save as 32bits, with RGB + Alpha channel, it just loses all transparency. If I use Nvidia plugin to save as DDS, unrealed just complains and won't import it.
Good Bye. I'm leaving UT99 behind. I won't be around for UT's 30th.
Top

During a relaxing time you might need to figure some information...

I was working at those teleporters in almighty EpicTown map. If I got something in 436 440 I cannot say the same things for 469 whatever. First of all Bot teleported by hijacking or directly routing through teleporters IT SHOULD NOT MOVE at teleporter where he came from - Destination is RouteCache[2] and not [1]. RouteCaches are remapped after reaching at Destination point. Teleporter is moving Bot TOO EARLY in majority of cases because of the Touch call, and then Bot is trying again because RouteCache[1] is the same as destination instead of Next Point which is more suitable when is reachable after teleporting.

Because I got tired of blabbering through versions one more bugged than another I think those teleporters are going to be KeyPoints - end of story. Nodes will get connected through walls and Keypoints will do the desired hijack, but first I'll use Bot_Runner as a try (which I wrote some years ago and useful in certain cases).
Except Teleporter written by me for map MH-Freeky(_blablafix) I did not see a better Teleporter class than swJumpPad and FV-LinkedPoint by Higor.

Is that hard writing a sanity check here ?
I see the spam message with 1000 paths is gone - I don't know if it was fixed or just deleted...

One of the Game Enhancements in 469b is


The game now uses DirectDraw 7 (instead of 2) and DirectInput 8 (instead of 3) on Windows. These newer versions work way better on Windows 10.

Can anybody explain what the implications, if any, might be for older Windows versions (like XP or Windows NT 5.1 (Build: 2600))?
Top
109 posts