Anybody ever heard of a Cyberus?

Do you search a certain mutator, mod, skin, map, everything else?
62 posts

Cyberus - poor him.
BPak in old formula has a sort of Pupae called BigFace having a stupid collision and blocking everything around, and shadow assigned to this crap was making night around it. I have happily destroyed that mess because I don't like to feel bugged in game.
If this Cyberus will be introduced into some good map to mess it up, I'll happily write a few things for it just for fun. You might figure something like: Cyberus died because of a depression after a small depressurization. I don't like these types of cheaters mooing in my yard doesn't matter who they are, or if are sent by El Presidente.
I'll bet on 5$ that I can write a mutator for it in order to see it taking damage - probably XC_MH will have some wrappers.... Else I was not interested about this monster but I saw the thread growing so I took a look around.
Top

As many know, I post similar content on a lot of different forums. The thread I'm replying to here has a corresponding one on BU.

The only difference is the one over there is still semi-active - https://forums.beyondunreal.com/threads ... us.205006/

EvilGrins wrote: has a corresponding one on BU.

Well the discussion here was over when gopostal made the Halapenjo/jalapeño ammo for the MH-Canopener.

Yeah, they don't have a great rep. There's a whole thread dedicated about how bad that forum is on Hermskii's.

Not everybody has that, and for maps I edit the thing onto... whoever winds up using the map probably wouldn't either.
http://unreal-games.livejournal.com/

Getting in touch with Jack on forums is tricky, he usually prefers to be emailed... but I'm not at home at the moment.

EvilGrins wrote:JackGriffin edited a version of the Cyberus that doesn't need any supporting packages. I'm still testing it but it's got 1 impressive and slightly annoying feature... it can't be killed:
screenshots and details
Show 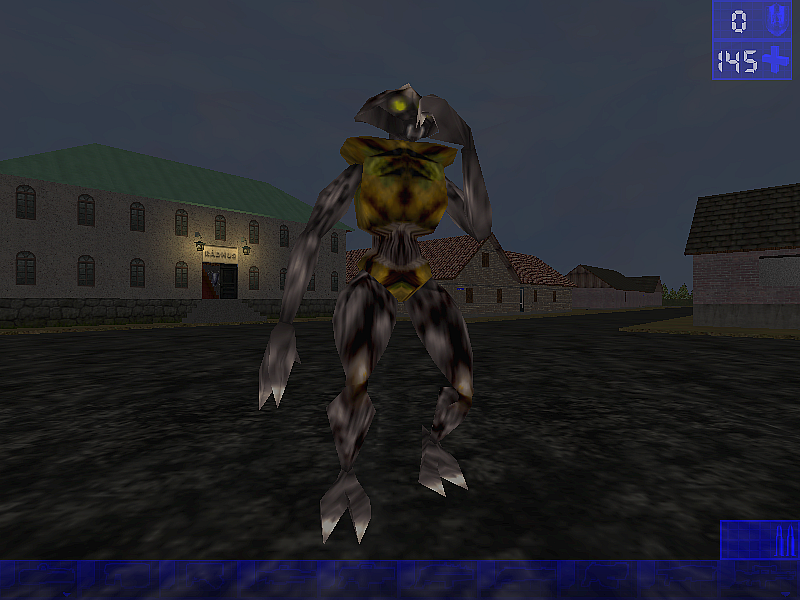 In the SP of Legacy you have to break some crystals before you can kill the thing. Near as I can tell, without those crystals around the thing is literally unkillable.

I hit it with several kinds of nukes, and eventually pitted other powerful monsters & bots against it. Not even so much as a scratch: 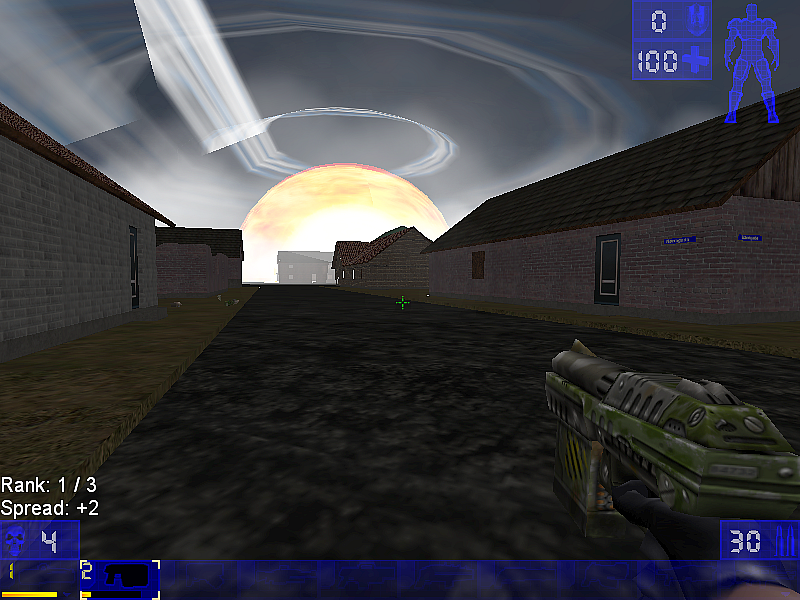 Cyberus has 3 main projectile attacks: duo energy bolts, the original razorjack, and a weird instagib the sky and then a pulse bounces back down to hit whoever it targets from above.

Cyberus has 145 health, which never wavers. It can generate its own shield, which is white generally but green when it receives incoming fire: 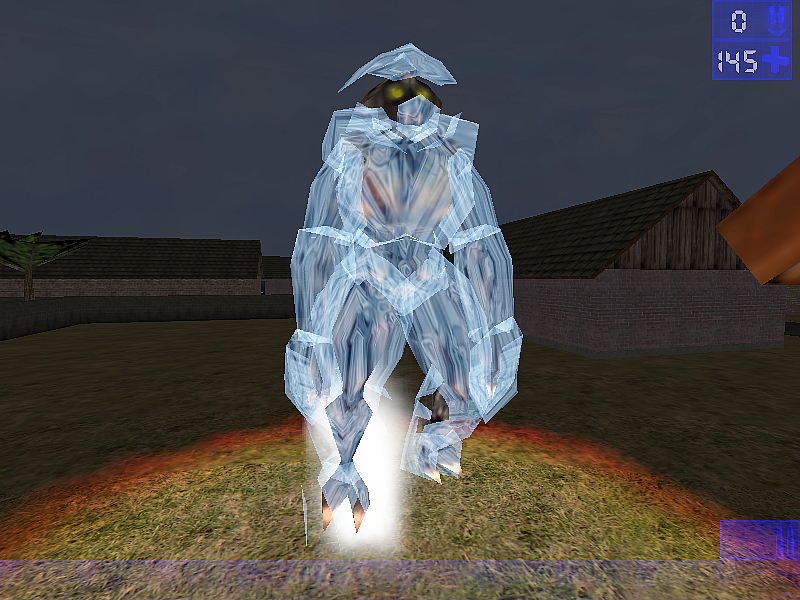 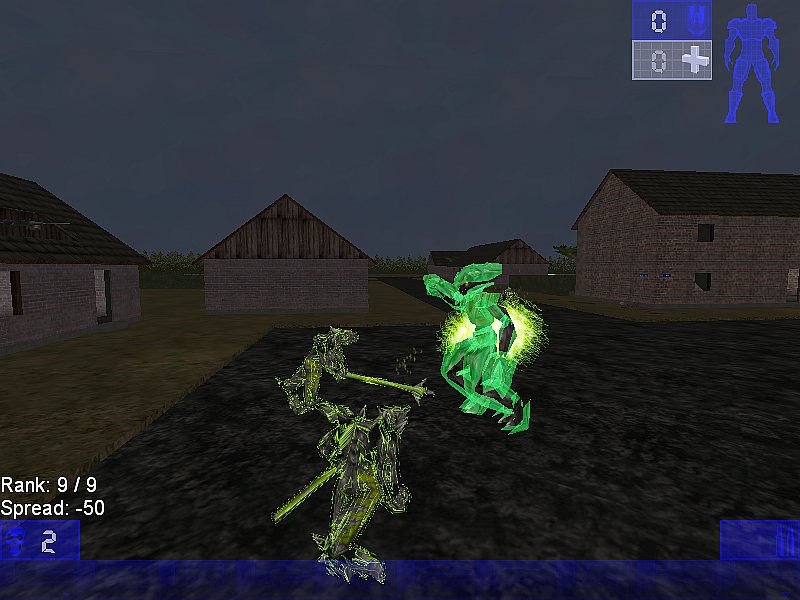 It can also fly.

Still working out if there's a way to kill it... but even without, it's slow moving and could be cool to use in some edits as a threat that cannot be eliminated.

Haven't tried telefragging it yet.

Most of the attacks the Cyberus makes are configurable when mapping, but it has 1 attack which is problematic. It fires an orange beam upwards that hits the ceiling and then a plasma bolt comes from the sky and hits whoever it was targeting.

Problem is the plasma bolt has a limited range, on a large map where the beam has a full sky to get up to instead of a ceiling... and changing that is (for me) not so easy.

Ideally, something with an unlimited range would work best. Either a redeemer or a full power dispersion blast.

Sorry, been awhile so I know this is kinda necro, but I started this thread so I think that gives me a loophole... 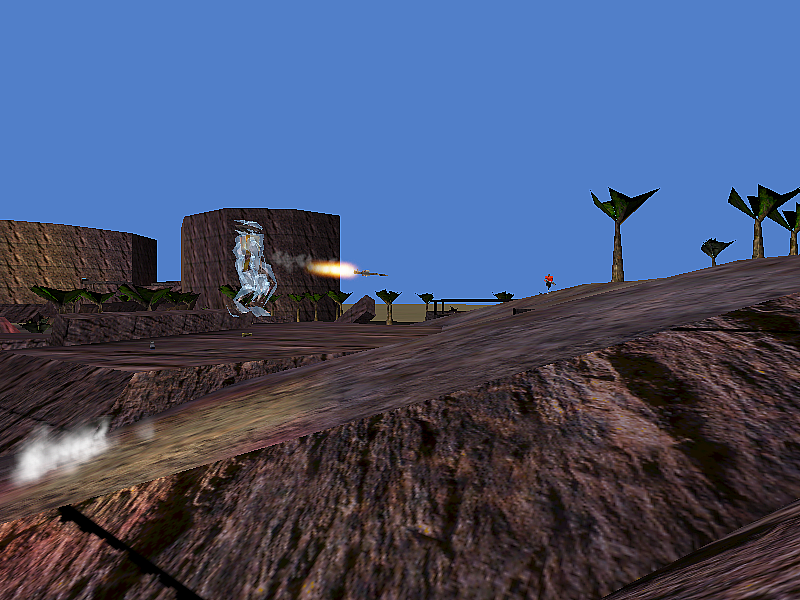 ...has anyone, other than me, tried mapping with the Cyberus yet?
http://unreal-games.livejournal.com/

I would love to check this out.
But i never saw a creature like this.

Is there any existent MH maps which he's (or she!) is on?
Or does anybody want to share a map on which they imported Cyberus?

No one wants to have an un-killable Monster.
What's the point to have this in MH?
-=: http://jokercologne.deviantart.com/ :=-

Allow them to do the junk and I'll take care of this Cyber-Rush when I'll have more free time...
Yes, I do not have any reason for using such things in public MH servers but... it can be "restored"... if a player wants that map for design or whatever good reason...
Top

iSenSe wrote:I would love to check this out.
But i never saw a creature like this.

As an Easter-egg or an April fools joke ...but not as a regular monster.

I can imagine to put this Monster as a hunter on cheater.
Or when the map is actually beaten and before you reach the End, this thing appears and you don't have to fight it but many would do it and get screwed up.

But as I said ...as a regular monster would this thing be bogus.
-=: http://jokercologne.deviantart.com/ :=-

EvilGrins wrote:Sorry, been awhile so I know this is kinda necro, but I started this thread so I think that gives me a loophole...

...has anyone, other than me, tried mapping with the Cyberus yet?

Let me clarify a couple of things.

Over the years Grins has offered me some quite valuable feedback for my projects. In fact he was often the only person taking the time to do that. In return I made him a few things privately that he had asked for. This is one of those things.

He requested an unkillable monster. It's not up to me to understand 'why' any more than it is for me to understand about 70% of what goes on in the gaming community. All I cared about was that he wanted it and I could give it to him, so I did just that.

This was not meant as a challenge to the mappers and modders of the community (at least from me). Grins simply set out the parameters of what he wanted and I met them. That's as far as the thinking went....OK, that's not entirely true. The reality is that I knew this would likely happen in the future and so I planned for it.

Just as there are multiple levels of infinity, there are different levels of 'unkillable'. If you know rudimentary coding this monster can be killed but it would require either a specific mod or a change to the monster itself. Both of those are just slightly above even a good mapper's general knowledge. This allows you to remove this monster if it's an issue, break him if he is preventing a map from completion, etc. but it still preserves the spirit of what Grins requested because to defeat it you must change it into something else.

The part no one knows about this is that I spent some time researching this and make no mistake: if I wanted a technically unkillable monster I'd have made one. This isn't it though, and it's certainly not a challenge put out for the community. It's just a monster that won't be killed by normal means.

However,
Spoiler
Show
He can be....moved or the trigger he is protecting can be bypassed. See how easy that was?
Thanks for letting me clear that up.
So long, and thanks for all the fish
Top

JackGriffin wrote:
Spoiler
Show
He can be....moved or the trigger he is protecting can be bypassed. See how easy that was?
Thanks for letting me clear that up.

If it's not dead by the high amount of damage, then it gets moved.
-=: http://jokercologne.deviantart.com/ :=-