Do you search a certain mutator, mod, skin, map, everything else?
41 posts

All right I read posts. A bit of answers - confusing for me as well:
- in some maps replacements doesn't work because those are "great maps" - I see that even in some CTF ones - for playing OFF line you can disable replacements by trying WTriggerer which will leave Weapons alone.

papercoffee wrote:So many maps don't have even simple pathing. @Mapper I don't expect something special but at least give bots the chance to follow me!!

Well said, but Not that much.
In some maps DevPath is blabbering it goes borked in game.
Samples
Get Map (converted ?) MH-Bridge. What we can see:
- Good Paths in Editor - linked well enough and they are heading to MonsterEnd;
- In game we can see Bots mooing and doesn't look like they have a goal - randomly they advancing and harder enough getting over PathNode61 they are really moving to End. MHBotyman4 for human (nobody asked INT file so I'm curious if anyone used it) reported missing paths until I went over that Node, after passing that area, only in a few spots I lost Navigation but mainly I was driven to end - Not from Start Location. Given Broken Path-Net - if You are on bridge and Bot died respawned, It won't find you as it won't see the end, for such cases you need to run back.
Another one: Garden Of Death
- everything might look well linked in blue and pathed properly;
- in game in exchange NOTHING like a Pawn can use any path - IT Does Not Work.
- I made such a Map to work using a sort of stupid hacks - nothing like a navigation inspired a bit from Mover code.
LandOfEternalSunset
- Properly pathed but it might have some Lake islands where DeVPath won't go over a perfect BLUE path. It just need moved checked, debugged for finding the right position of a PathNode.
Some LongRace... whatever:
- DevPath doesn't seems to head somewhere in Start Location;
- After first room it do works properly.
The problem is if some internal Dev of Engine is doing NONE reaction, MAP is sadly to say - broken - everything is based on how geometry is build and how much loaded/optimized is that work. About the rest of factors like SeePlayer HearNoise - well I won't ask. And Paths are not good only for Bots, paths are good for creatures as well but hey, "my monsters needs to stay" is the only thing which I was reading everywhere - more exactly everyone needs to know where monster is located for less fight as possible and a more no skill game.
When EG or me, wants a map with Bot "Covering", FIRST thing which I do is a sequential check around DevPath else I'm not waste time with adding PathNodes because it might be useless. I see lists by FragNBrag to be honest not even some of those listed good, for me are far from good at this point (I know what I'm saying from past experiences).
Top

It's annoying but many mappers intend MH for online play and don't think about bots.
http://unreal-games.livejournal.com/

MH504 + Food Fight
NotFF01.png
NotFF02.png
@EvilGrins did you encounter the same problem?
@sektor2111 ...what did I wrong?
You do not have the required permissions to view the files attached to this post.
-=: http://jokercologne.deviantart.com/ :=-

Nope, it doesn't do that for me... but then again I'm still running my original MonsterHunt install: 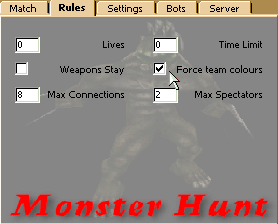 Only upgrades I ever used were from the original MonsterHunt site. I've seen the more recent upgrades but never felt compelled to use them.
http://unreal-games.livejournal.com/

I see what's there.
Those are 3 weapons buggers replaced by 504 with new ones (they were pissing me off during MH tests). So these replacements won't work with Jack's system:

because the code is very restrictive at this point trying to prevent infinite recursions crashes at using child of these Tournament weapons. Food fight being another type of stuff should use "ISA" calls, slow or not are healthy at this point.
Preventing infinite recursions is doable by adding a secondary sanity checker which I don't see why is not used.

This code wants a replacement but making exception for already replaced child or non-child classes and won't be causing any infinite recursion problem. That MH was on purpose to be used as it is without too much stuff, aiming some fixes and a little better A.I.

Anyway I'm gonna do some checks at XC_MH dedicated only to XC_Engine19 before dropping it out, which will no longer use these as long as "ReplaceFunction" by Higor will do the work for me. I still need time to prepare testing Levels with weapons and Monsters holding them in order to get more data about functionality, Probably I have to recreate another "FloorWays" type Map with more stuff for doing tests.
Top

@sektor2111 Thanks for the clarification.
To install the XC-Engine is my next thing on the to-do list.
Chamberly made a comprehensible tutorial. https://sites.google.com/site/ut99gotyd ... nt-install
-=: http://jokercologne.deviantart.com/ :=-

Played this Garden of death which @EvilGrins recommended ...and after I got very fast bored with the default weapons (because it was soooooo long) I tried the old Excessive weapon pack.
Yay! Translocator.
I got very far with those weapons and before I reached the teleporter I got this...
ErrorGPF.png
methinks something doesn't fit very well

Anyway ...now I try some maps in single player style. Especially those without paths.
You do not have the required permissions to view the files attached to this post.
-=: http://jokercologne.deviantart.com/ :=-

papercoffee wrote:Anyway ...now I try some maps in single player style. Especially those without paths.

MonsterSpawn, like relics is using PathNodes to spawn creatures, is pretty useless in empty cubes (called maps).
MonsterSpawn does funky things when spawns SkaarjTroopers on some InventorySpot - simply there are chances to see weapon vanished no longer usable.
MonsterSpawn types are using some funny code "return" with a few chances to exit game - probed by me and which doesn't call Killed function from Level.Game because of this thing breaking "killed" chain and counting creatures in default MH.

I will post again 100 times these issues if you insist - I switched to swarmspawn mutator by Loathsome because MonsterSpawn HAS ISSUES even if you believe or not.

Around SkaarjCrash
Some "coders" are copying all original crap into new content called "development". Good luck, and have fun! Except crashing servers and breaking people's fun, the rest is OK... To not forget that DevPath doesn't work in such sick Level, won't work probably neither other things, they are reacting in the same way... if you are mooing at engine, it will not forget to reply.
So THIS IS Off-Topic as longs as a map crashing doesn't accomplish title with that word "recommendations", I wouldn't recommend such Engine blast not even to my enemies.
Top

I use MonsterSpawn only for when playing LMS (Last Man Standing) as it's handy for campers. Monsters tend to find them easily and kill them, but under LMS being killed by a monster doesn't cost you any of your remaining lives... just means you've gotta move.

For Deathmatch I recommend MonsterMadness, for monsters who can actively take part in the game... they can even win.
http://unreal-games.livejournal.com/

Sure, that's why (or one reason why) I said suitable maps.


sektor2111 wrote:... I switched to swarmspawn mutator by Loathsome because MonsterSpawn HAS ISSUES even if you believe or not..

Oh, I believe you. I've used MonsterSpawn alot over quite a long period of time and haven't noticed any problems or issues - save that of monsters not spawning in maps without PathNodes. I don't use weapon-carrying Skaarj a great deal but when I have, I haven't had any problems with their weapons.

Swarmspawn is good, I agree, particularly because of the ability to alter a number of the monsters' properties - I have used it a bit - it does require a lot of setting up in the ini though if one wants the range and quantity of monsters possible with MonsterSpawn (or at least, if I want the number and types of monsters that I use in Monsterspawn). It does though lack the randomness of the latter, which makes it a bit more predictable and a little less 'exciting'.
Top
41 posts