Do you search a certain mutator, mod, skin, map, everything else?
38 posts

On Hook's CMM Discord channel, Xaleros asked about what an exclusive map from Best buy.
There are a few sites that mention it
https://www.labelgames.com/Item/id547.html
https://www.ebay.com/itm/Unreal-Tournam ... ect=mobile


This copy of Unreal Tournament: Game of the Year also features also features an "Exclusive Best Buy Bonus Level" which was available for a limited time to customers who Pre-Ordered their copy from Best Buy.

My reply in the UM discord:

gopostalYesterday at 9:03 PM
It's a collection of maps and they are terrible.
I have the CD image somewhere on one of my drives.
It looks like someone learned editor over a weekend and then made a selection of generic maps but didn't do the final round of polish.

I'll try to dig them up today but your expectations should be somewhere near zero. The reason you don't see them is they are simply not good work. It's unfinished, unpolished and unsatisfactory.
So long, and thanks for all the fish
Top

I'm certain, some fan of bad maps will like them anyway

My 1st guess was something like DM-Gen][ by Inoxx, since it only mention level in singular, and logically thought it would be still something from one of the original devs.

Still interested to find out what this is, even if it's not good.

gopostalYesterday at 9:03 PM
It's a collection of maps and they are terrible.
I have the CD image somewhere on one of my drives.
It looks like someone learned editor over a weekend and then made a selection of generic maps but didn't do the final round of polish.

I'll try to dig them up today but your expectations should be somewhere near zero. The reason you don't see them is they are simply not good work. It's unfinished, unpolished and unsatisfactory.

I'm probably putting myself in further bad standing for mentioning it, but that describtion fits the majority of maps released for this game doesn't it?
Retired.
Top

Yeah, but there's a steep learning curve to make a *good* map. You also need a certain amount of artistic talent as well as aesthetic awareness. That's a rare combination of skills. I don't think your statement is at all incorrect.
So long, and thanks for all the fish
Top

Not wanting to steer away that much into offtopic, but this engine is especially unforgiving given that it plants fear into even the most experienced mappers, leading them to think way too much inside the box and preventing them to be more creative and add more detail, given that if they do they run a high risk of having all sorts of problems that Epic never fixed and never will, ranging from performance issues to bugs and even hard crashes, be them from BSP, lighting and others.

Even I, although I know my fair share about mapping in general, and don't really buy into most myths I see circulating around here and other places (especially around BSP issues), giving me a bit more freedom on how I do stuff, I still end up making maps which end up looking way too "box"-like, and almost every curvature is carefully calculated to align with every other vertex and to remain in the grid and in the same plane as other surfaces (to not create too many cuts and polys overall), and even so I still end up with some problems here and there simply because the engine is just way too buggy, especially concerning BSP and lightmaps, and especially when handling a high number of cuts in view or very big polys, it will just shit itself, not only in terms of performance, but occlusion bugs as well.

There isn't much motivation, especially for new mappers, to go wild with quality only to be hit by the overwhelming amount of engine problems, you have to know way too many tricks about the editor and the engine in general to do a high quality map that doesn't end up in the trash bin by how unstable it ends up being.

imo, unreal editor (ue2 and 3 anyway) easiest and most forgiving editors when compared to, worldcraft, hammer, radiant variants, etc. which are just so difficult to use - once you've used ued2 - you see they are very unforgiving editors. In ued you could basically get away with horrendous curvey intersected brushing shit you could never build in quake1/2/3/halflife/cs. There are many unreal and ut maps from 1999-2003 that are crazy brushing messes and yet they somehow still worked. That said, even if you do everything right you can still have collision and lighting issues.
-=FraGnBraG Level Design=- ***UPDATED! even works on your phone!***
All Stand Up (2021 LP) *** My Covid album

Anyway back to topic, any luck? Oh and probably I should turn on the bat signal for this one

I looked and I must have deleted them, I can't find them anywhere.

This was years ago but I had a discussion on one of the forums (here, BU, or most likely OU) with the person who sent them to me. I can't remember who it was but you are welcome to google and find it. We discussed retexturing them but ultimately discarded the whole thing because the levels were so shit. It's going to be multiple years back so don't look at anything recent I've posted.

Edit: Found the thread and it jogged my memory. Hello from 2014 lol...I convoluted the Best Buy levels with the 1998 Unreality CD. *That's* what I was thinking of and they probably are not the same thing (though they might be?). I'm genuinely interested now if they are. Anyway if you look up Unreality 1998 CD at OldUnreal we had a normal forum discussion around it. And by normal I mean it includes the requisite shitposting, name-calling, and unnecessary vitriol that makes Unreal forums fun.

Sorry for the confusion. My mind is starting to slip a gear now and again.
So long, and thanks for all the fish
Top 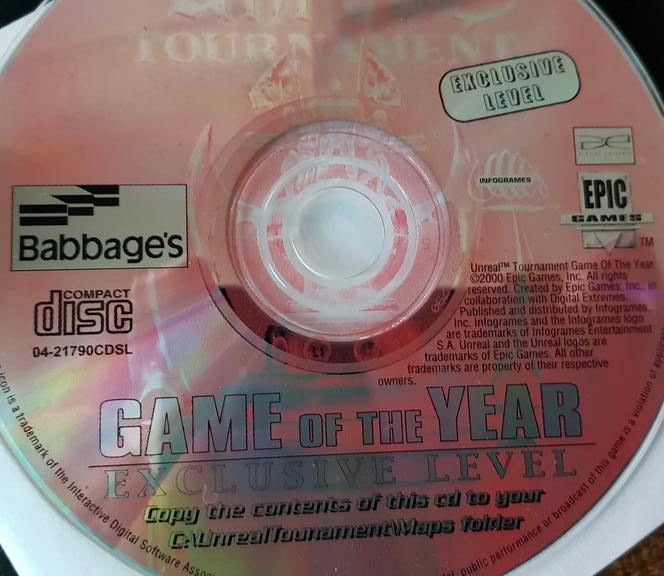 There's the CD and me with no CDROM drive hooked up.

It'll have to wait until tomorrow when I'm in my office.

My "Bestbuy" edition is sealed, but the disc above is from an otherwise unmarked edition of GOTY. Not sure how exclusive the bonus level(s) are/were...

Jack, this is not the first time you confused something with that.

This reminds me of the "votlan" Unreal CD released in France.

Unreality was not something Epic approved really and it only got released thanks to Epic not shipping the level pack etc and customers wanting to have at least something, at least ones without internet.

Still, there are some quality levels in Unreality, especially for its time.

There might still be more floating somewhere like perhaps the Intel OEM pack got released somewhere, I don't know.

And one of the Russian unreal releases might have been a beta, however my search came up with "false positives" so far.
I'm in grave IRL trouble, please donate:

Leo(T.C.K.) wrote:Jack, this is not the first time you confused something with that.

I put pieces of paper into plastic boxes for a living. Be thankful I can form (semi) coherent sentences

Ha ha ha, that's right. Either way looking forward to Carbon uploading it and sadly me not being able to try it as my fate is now basically on the cliff's edge.

But I do expect people to post screenshots or videos. It might be a bad level for the "glden standard" but it might be a gem too, who knows. Some worse looking levels can be a blast otherwise.

This might also not be identical to the bestbuy stuff, we don't know. It might be yet another exclusive. That's the problem with all those special deals and oems etc.

I also want to note that some GOTY levels like the volcano ctf map for chaosut are "sub standard" as well, going below the average but still managing to convey unique setting.

EDIT: Either way, preserving those exclusives is preservation of history and Carbon will be held (for me) in higher regard because until now he was "just" the unreal edition/repackaging collector guy.
I'm in grave IRL trouble, please donate:

You do not have the required permissions to view the files attached to this post.
Unreal Series Collection
Unreal series screenshots (2560x1440)
Top
38 posts