Do you search a certain mutator, mod, skin, map, everything else?
19 posts

JackGriffin wrote:Some advice here EG? If it were me I'd zip it all up, send it to Nels and then wait. Whatever he does will be right, I can guarantee that. I wouldn't even bother with trying to help or decide things. He's really that good.

^This.
Oh that reminds me I totally forgot to upload his edited version of my RocketFight map.
He turned this map into a real Hell for players ...Bots are hunting you and fight back in a way you would never expect.
Loque on this map wins in 80% of all matches.
-=: http://jokercologne.deviantart.com/ :=-

Oh, believe me, I know. Anytime I find anyone trying to do a map and wanting input, I link them to Nels...
Spoiler
Show 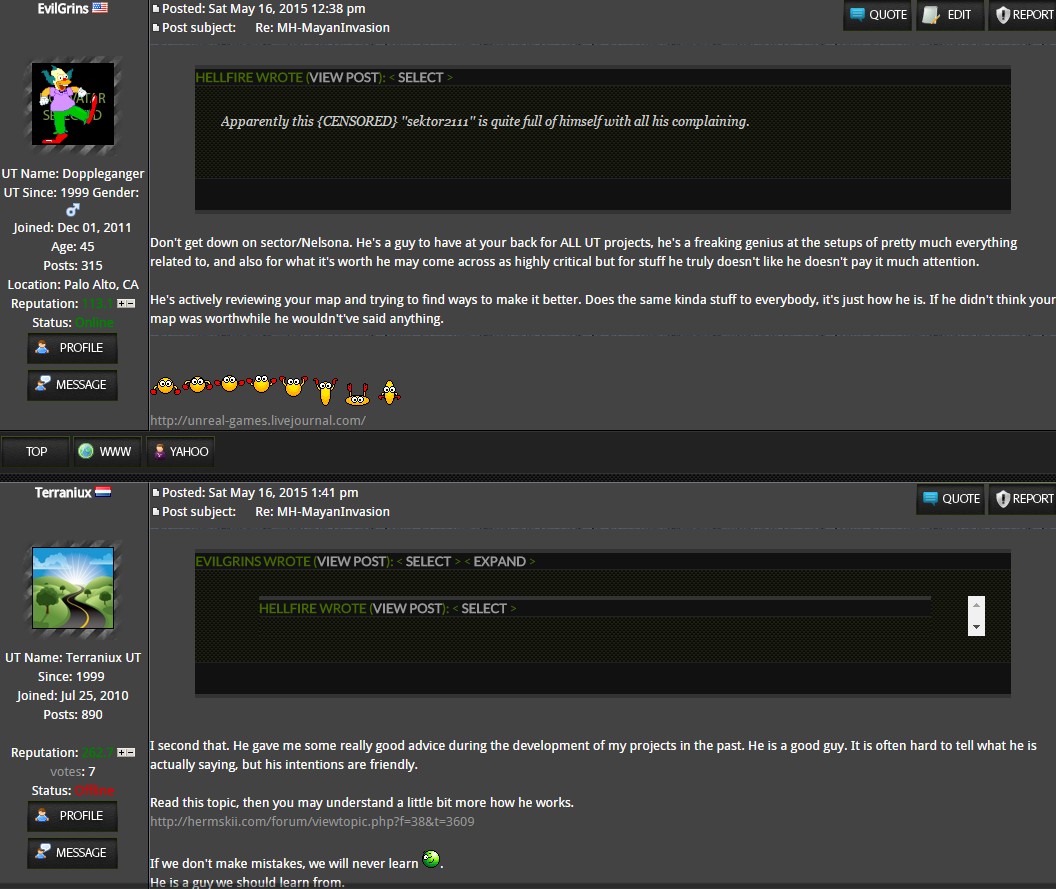 I recommend him to all!
http://unreal-games.livejournal.com/

Don't get the big head though Nels. We still think you are a cunt. You just happen to be OUR cunt.
So long, and thanks for all the fish
Top

papercoffee wrote:Bots are hunting you and fight back in a way you would never expect.
Loque on this map wins in 80% of all matches.

There I have added let's say a minimum or required Navigation in order to extend A.I.... I think also we might have KarmazorNo.2 if needs. First request was for Cannons (for which I was on Focus mainly), but next one might address A.I. as well and then I have to watch a match between the cunt and some... pawns there, eh.

JackGriffin wrote:We still think you are a cunt.

Absolutely true, in random moments of happiness and domination I'm telefragging Cannons, I'm doing 20 spawnkills by telefragging UTDMT in humiliation purpose just to laugh, I'm shooting MBot when starts to do BT faster and better than me making it to fall, different jerky things with A.I.... Technically, I still have to work at different A.I. optimization dropping some codes where Level seems "too blind". I recall some Galleon test where I did some research. Once done job I was constantly telefragging Bot (it was ignited me first when was gibing me) so I replied 10 times back. Don't wait me in MH servers where runs BBBridge maps (any), I'm using to awake all sleeping Skaarj bringing them at so called hunters (if they feel bored at pupae section), MHTranslocator (most versions) helps a lot + DJ where is used. If people wants a mess I give them mess×10 with bread and tomato sauce to look nicer

, Also I'm always opening all doors which can be opened with GRAB command (if mod permits that) - if mapper implemented that feature, then I'm using it... If some dude bugs the party I do reply, in any common server with normal setup and collision I block teleporters properly for a while (some of them were screaming suddenly: Bug Here!!!)

So back to Map Identification chapter... I was unable to detect if some of those Levels are gonna be my way. Mmmm,

Edit:
See what has been released yesterday, announced, and then maybe you'll understand my statements from many cases. You might copy me - no restrictions.
Top
19 posts