There you have it, now to phase 2 which is betatesting.
You do not have the required permissions to view the files attached to this post.

By accident, I'm asking if you have a MH place-holder for load such maps in Gold's Editor (will except me to waste time creating one), I wanna see differences in paths building from 227 Voodoo's features.

Edit: Gotta do some MBot updates as long as this Pawn doesn't like to get lost from paths, they are leaving horizontal long range lift I have to except a Mover(Base) for such case triggering a small camp-time. :/
Edit2: I was expecting to see SkaarjLord10 moved in map... somehow.
Edit3: One of General Skaarj just evaded in Wall...

[attachment=0]No_Wall.JPG[/attachment]
Heh, there is a lot of work around... this map is far from being a good one regarding to said "nice" and "awesome" descriptions posted else where... Not gonna check all details for preventing deeper deceptions.
However, pathing stuff by Higor is perfect for other good Levels - maybe LostInTimeVx or others...
Edit4: Conclusions:
After a little Node move (for preventing Crushed Bot), ignoring BSP and low FPS, I could see MBot_E finishing this Level - they passed even long horizontal Elevator based on something cute added when Bot stay on a Lift, simply as long as Lift does a movement it will do nothing, they passed more times (were getting mad at Skaarj in range). After some checks around other maps, I think I'll share this Bot able to use a moving platform with more than 2 key-frames aka Mover aka Elevator, aka pig trough or such. In fact major problem was at exiting from lift - jumping too early .
This map was still spamming DevPath problem but... hey, it's playable by MBot_E in big parts... crazy paths, Higor

.
You do not have the required permissions to view the files attached to this post.
Top

UT bots were able to finish the level with a few quirks here and there; nonetheless, they were able to complete it. They would deviate from the goal path they were following for about 5-10 seconds and then proceed regularly. This particularly happened on the dock, near the bottom of the level. I (almost) had to solo beat the skaarj in the building while traveling on the horizontal lift. They loved to jump off that lift as soon as they 'engaged" with an enemy pawn.

The map is really fun to play tho; I had the bots guide me through the whole thing.
Top

Old UT Veteran wrote:I (almost) had to solo beat the skaarj in the building while traveling on the horizontal lift

This is pretty lousy at a moment. Right in this forum was debated a problem with a horizontal lift - Bot jumping too early from lift and it was needed a small pathing hack - Bot by default cannot manage that if is not enough fine tuned - Bot skill also must be taken in account - speed affects jump range.
I'm gonna share MBot_E with a small demo Level where everyone can compare 2 default Bots with 2 MBot_E types and see what I mean, but first I wanna see some testing results toward other maps. It will go in desired "Short Bot Note" topic.
Top

Old UT Veteran wrote:The map is really fun to play tho; I had the bots guide me through the whole thing.

As a matter of interest, any idea how long it took you to complete the map with bots? Just interested to compare this with playing the map as a SP.
Top

How many Bots ? It's not the same thing playing with 2 Bots or 20 Bots. Else do clock it.
Top

Old UT Veteran wrote:The map is really fun to play tho; I had the bots guide me through the whole thing.

As a matter of interest, any idea how long it took you to complete the map with bots? Just interested to compare this with playing the map as a SP.

To be honest, I had to reset the map because I underestimated the sheer size (and monster #) of this map lol. I decided to go full out and spawned about 25 (+/- 3) godlike bots after setting the time limit - quarter of them got stuck on small vertical lifts (grouping under the lift and preventing proper movement), while the other portion (if not all) would fall off a horizontal lift and try to get back to the tower from the bottom of the level. If anything, the lifts around the map hinder the bot-play and cause the match to drag on, encouraging solo pursuit of a certain goal (really just 1 imo). I couldn't complete a single area solo because almost every corner I took, I had my head popped off or my body mutilated by a rocket. We finished the map well after an hour (don't remember the exact time). Most memorable moment: 15+ bots jumping into the docks from the cliff lol.

As a SP you would have a difficult time playing lol - not to mention it would be rather disconsolate to play a map of this caliber solo. You could play carefully (of course...), but I bet you won't have as much fun with it. There are a few monsters on the map that are a 1 hit K.O., and skaarj snipers which probably killed me about 10-15 times in that one session I played. Some areas on the map are heavily guarded by monsters armed with snipers and rocket launchers. If you want to embark solo, be ready to 'glitch-kill' the monsters and die a lot. There are plenty of areas that you enter and you die almost instantly (e.g. open door to big fort and 2 skaarj generals lunge at you) - would not take the effort to try to solo this map without dying. Map play-style reminded me of MH on destinationunreal server: getting lost, easily killed...MAYHEM. Maybe if the map didn't have so many densely inhabited areas with monsters.

Unless you're up to the challenge...
Top

@Old UT Veteran
Thanks for that - I did wonder if having a lot of bots would be problematic given the number of lifts on the map and if this would tend to slow down gameplay. I have played both versions of the map (SP and MH), as well as the SP as MH, solo a few times with, I must admit, health regeneration and found it great fun, though it does take a long time (around 3 hours) - it suits my style of play which is proceeding carefully and stealthily, looking ahead and taking out any many opponents as possible with the sniper rifle. I'm just curious as to whether to try it with bots.
Top

That's where you have to sit back on the bridge and snipe as many of the skaarj as you can.

OjitroC wrote: I'm just curious as to whether to try it with bots.

I'm kind of glad this map got bot support now; I would have never attempted this map solo. When I had 20+ bots enter the main lobby of that map, all shit hits the fan - tears start rolling and the noise coming from the skirmish is like a lullaby. I'm always briefly reminded why I love this game so much. Wp Higor.

And yes, you should try out the bots. Unnecessarily omitted that part.
Last edited by Old UT Veteran on Mon Jan 09, 2017 7:07 am, edited 1 time in total.
Top

OjitroC wrote: I'm just curious as to whether to try it with bots.

I'd recommend that. This is the kinda map you don't wanna try alone... ironically as it was originally intended to be SP for Unreal1.

I went in with my usual random assortment, me with 8 bots: 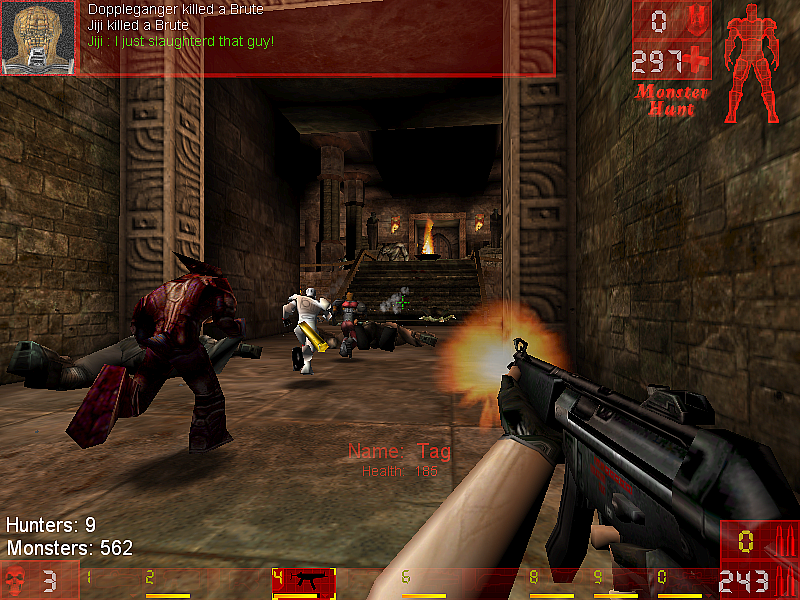 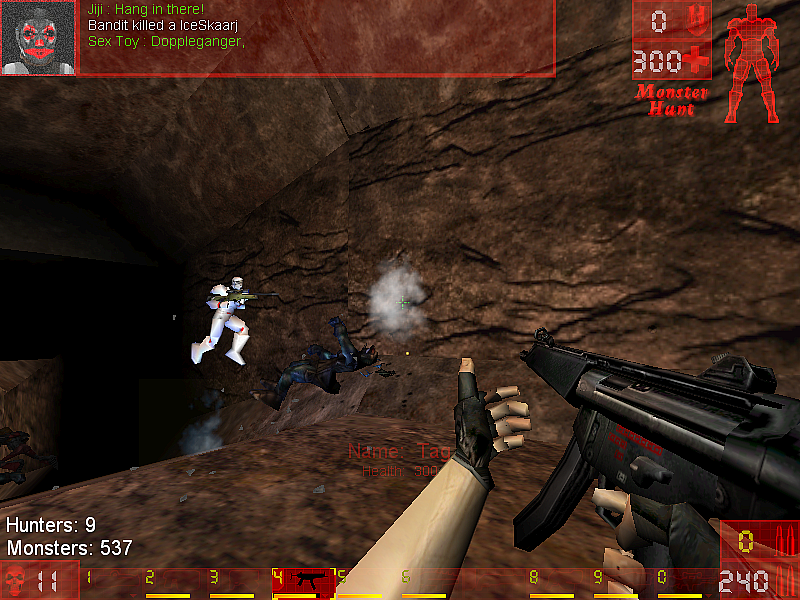 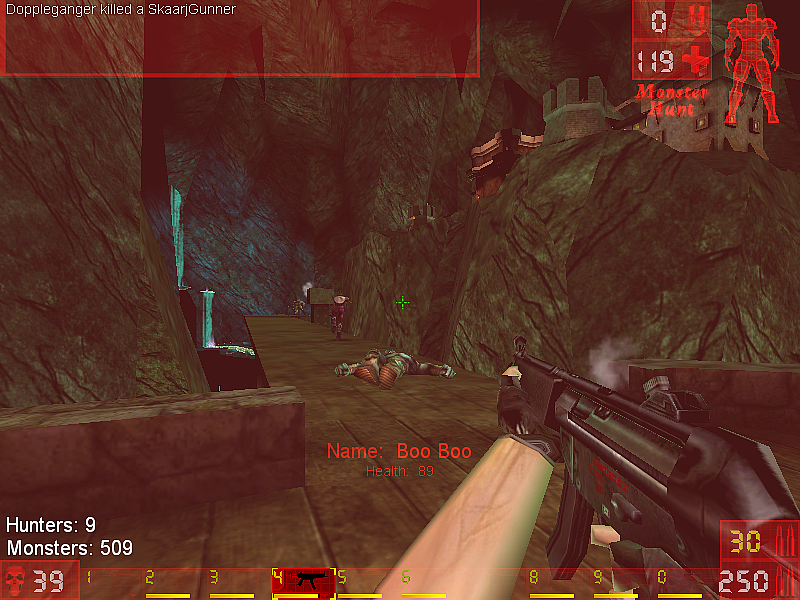 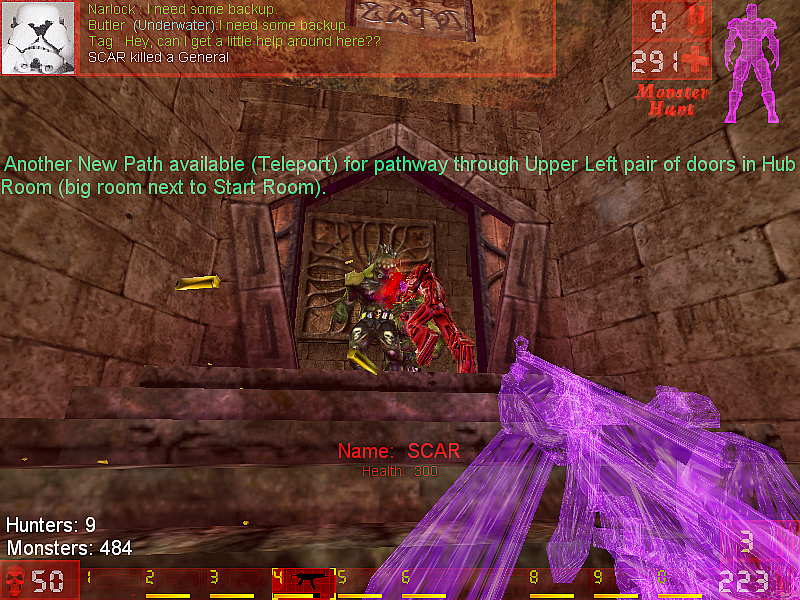 This is the kinda map I'd probably need the better part of a ½-day to attempt.

Really need to find my walkthrough guide for this map before then...

Pathing is spot on, though the bots do seem to prefer to swim where they can rather than walk paths.
http://unreal-games.livejournal.com/

Bump, I was trying to solve some of those BSP problems which I could figure in game. I see those walls improved but... spectating from certain height and angle over water still returns a little of HOM - but not by playing directly... Heh... geometry here is not the best thing - is forced, is too much visibility to a bunch of polygons, it blows up display for no reason...
I have exported T3D map format and trying a build with Gold227-Editor - LOL - it was far from a good build... map sucks in construction, like WarMaster said years ago. First it caused invisible walls, then zone leaks, then I quit trying with that because was pretty useless in such case... and spending useless a lot of minutes.


EvilGrins wrote:Pathing is spot on, though the bots do seem to prefer to swim where they can rather than walk paths.

Higor wrote: PD: Added a small Jeronimo shortcut which becomes available once someone uses the lift at least once so bots don't get stuck waiting one after another.

Of course I moved a Node a bit because I could see my Bots crushed multiple times by hitting bridge.
Top

Been meaning to get back to this, have a screenshot of a likely unfixable issue. It's one of those things that when you get to that point an actual player is required to do a thing no bot can do on its own.

Basically there's this sort of (not exactly) "ski-lift" at a certain point and thus far (I've let the bots have a few go's on their own while I watched and did my laundry) when the bots get to that point they don't stay on the lift as it slowly slides from the top of one castle over to another along a canyon wall. No, they just jump over the side and land in the water FAR below.

Screenshots will better display the where of the issue, for those who didn't instantly understand my very confusing analogy.
http://unreal-games.livejournal.com/

That's why I have added "NoLost" actor and I want to implement some water stuff around some default Bot problems but... I need a good map else doesn't worth any effort.

NoLost uses a brute force for claiming reachable a node even is if at 4000 UU from Bot if has a good traceable line and Bot doesn't have a goal to move in a nearby range. It's pretty helpful (for me is a must-have tool).
Top
62 posts