Let me start off first with something we all know but I'm going to just say it again....

Ferali is just fucking awesome. Like legit awesome. Yeah, you know...We all do. He deserves the praise though.

For my contest entry I really wanted to fix my stupid battleground clone gametype but the non-working collapsing zone was just not doable no matter what I tried. The long and short is that Ferali not only fixed it but he showed me how to fix a ton of other things I had discarded over the years as not really doable. Stuff like the hidden door finder, true X-ray glasses, etc. Because of his effort this project is not only resurrected but I'm throwing everything I have into it.

Anyway I really am going to enter Deck as my map but the actual entry will be UTBR, Unreal Tournament Battle Royale. It's an import of the Fortnite/PUBG style of play. Primary coding is done, the game plays like I want and I'm getting close to server testing.

In case you don't know the style it's a single elimination match. You die once, you're out. Last man standing wins. It uses real life weapons with real life difficulties shooting them, reloading, and each weapon requires practice to get good. Submachine guns spray ammo but aren't as accurate, sniper rifles require scope usage to be accurate, pistols are deadly up close but suck at distance, assault rifles are great all-around but all need reloading. There are airdrops of top-tier loot, all new pickups, armor, and even helmets. And yes, there is a pan and yes, it can stop some bullets.

What I need now is some feedback. I don't want to over-produce this mod. I only want to include things that are of interest. If you know the playstyle and you can imagine it done in a DM map then are these interesting inclusions to make:

- Some sort of "player airdrop" at start if the map is large enough? This won't be many maps but it's a core concept of the gametype. There's just no way to include it in normal DM maps though, unless you have an idea I hadn't considered.
- Zone radar. I was thinking of adding a small radar on the HUD that lets you know where the zone is in relation to you. The only issue I can see is that many DM maps will be 3D versus the 2D representation that a radar will provide. Imagine you are moving in space around a sphere larger than yourself, going in and out of it. How best to represent that in a 2D graph? I'm not sure it will work well enough to be useful.
- Manual reload. The guns are set to automatically do the reload animation when the clip runs dry but is it of interest to allow players to bind a key and trigger a manual reload at their choosing?
- How much to mess up the HUD when you are outside the zone. As it is you can load up on health pickups and camp outside the zone for probably too long. I need to offset that by making the player's view either a bit blurry or shaky. I was thinking of using the Fortnite effect of a storm to put heavy rain and lightning on the player's view if you outside. Should I dispense with all that and just make the zone deadlier as the game progresses?

Thanks for the feedback. I'll have some preview videos to post in a week or two. That will help you decide what is useful and what isn't.
So long, and thanks for all the fish
Top

This is very interesting.
I vote for reload on demand or else you would run into the same problem as in Food Fight.
And you should make the reload interruptible by weapon switch ... the weapon stays with that ammo amount till you switch back to it and start the reload again.

And weapons can't be thrown but exchanged with a weapon on the ground. like in Counter Strike or Halo. Or if thrown is this weapon empty or only left with a few bullets.

I love the idea, you guys are geniuses. I tried to recreate a battle royal for UT, if you want I can send you my ideas and source code of what I got so far, but cheers for yall for taking it more than two steps further! I just stuck with vanilla UT weapons and pickups. I can't wait to see what you guys got!
Prophunt for UT99!!!

Hop on my TS, you can co-create this with me. I don't mind if you join in.

@paper- In the gametypes I'm using as a template you have to swap guns at times because you can't carry very many. I started to use that dynamic here but in testing with bots there just isn't time. Most rounds are very chaotic and honestly the zone rarely becomes an issue. About the only maps you might have time to swap out would be really large sniper ones. After the contest I'll make a stand-alone mod that allows the shrinking zone dynamic to be used with any game. It might be a really interesting addition to maps like inch-high guy. Might be neat in redeemer games too.

Yell at me if you get free time. Let's play a bit with the weapons and you tell me what you think.
So long, and thanks for all the fish
Top

JackGriffin wrote: Yell at me if you get free time. Let's play a bit with the weapons and you tell me what you think.

I have to look ...today might be complicated.
-=: http://jokercologne.deviantart.com/ :=-

My dad is flying in today so I'll be mostly afk until at least the first of next week. If you feel up to it later on we can work out the deets.
So long, and thanks for all the fish
Top

In the future once this is released, am I allowed to make a large urban map with vehicles for your battle royale mod? This won't be for the contest, but just an idea I have for a future map.
Top

Of course. In fact the mod is going to be map-independent. You'll be able to run it on whatever map you like so long as it has pathnodes and playerstarts. If that doesn't work then for sure I'll put out the source code and you can do whatever you want (as always).
So long, and thanks for all the fish
Top

Still working on this in my free time. Finished up the scoreboard this morning... 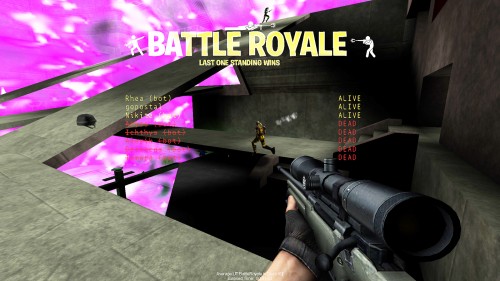 It was difficult to get correct but at least now I know font import and canvas drawing better than I ever have. BTW is there any interest in a comprehensive font .utx for everyone to use? I ended up writing an import script to automate the process so it's a simple matter to add a bunch of fonts to it and make a texture file anyone can use.

(Edit: reuploaded the screenie, was a little dark)
So long, and thanks for all the fish
Top

Yeah, they really do. Eventually I'm going to set the weapons up with a nerf level so admins can restrict damage by a percentage to make games last longer. It's pretty easy to get killed by a bullet spray as it sits but some groups may like that. Others may want damage reduced so that you have to hit someone multiple times to kill them. I'll make it all easily selectable with a single percentage value. That way it controls damage across the weapons.

I also hard coded some anticheat so that players (cough admins cough) cannot use cheats without being flagged in-game. It can be turned off but every player will know if the system is active or not at the start of the game. It's rudimentary but should help prevent a bit of unfair play.

I made really good progress this morning. The core game is done as well as the HUD, scoreboard, and graffiti. Thanks to Medor for suggesting me to look at old uz files for clan logos. I found WAY more than I can use and there are some golden oldies I imported. You should get a chuckle or two at the random sprays in the maps.
So long, and thanks for all the fish
Top

This will be super fun online. Will there be a Royale server?
Top

Yeah, I'll run a low latency rental server when the contest rolls around so people can play it easily. And you guys laughed at me for entering Deck as my map...Who's laughing now mwahaha...cough cough....wheeze....
So long, and thanks for all the fish
Top

JackGriffin wrote:Still working on this in my free time. Finished up the scoreboard this morning...

Shot0016.jpg
It was difficult to get correct but at least now I know font import and canvas drawing better than I ever have. BTW is there any interest in a comprehensive font .utx for everyone to use? I ended up writing an import script to automate the process so it's a simple matter to add a bunch of fonts to it and make a texture file anyone can use.

(Edit: reuploaded the screenie, was a little dark)

Is that a battle royale mod for UT99

That actually looks a lot better than what I honestly expected. Very nice work indeed.