Well then I can call bullshit on that. I went out of my way to see my friend, perhaps not as often but I still did, even when I moved to the other end of city.

Again, they aren't real friends in the sense I see real friends. They do come and help? I bet they wouldn't if it was the state that you have problem with or having a tatooed nazi cop/rogue detective after you.

No, they will help you ojnly within their "limits" and never try to push outside those limits to save you. They will perhaps help you drive somewhere but they will not sacrifice it for their own sense of security and/or luxury.

So, this should be a correction. Most people who call themselves friends aren't really friends and they don't know what that word means.
EDIT:
I also remember, what I did for my friends when they were down. But almost a decade later they couldn't do the same for me, when they settled down and resigned on having been flagged this and this and take medication because they think something was wrong with their head.
At that point, they start behaving like cowards and are unable to do what I did for them decade ago. So trust me, I know what friendship is...
Top

This thread has been a roller coaster of everything from corporate spying, foreign and domestic government and military conspiracy, moral, ethical and privacy concerns, to journalism, and the nature of friendship. 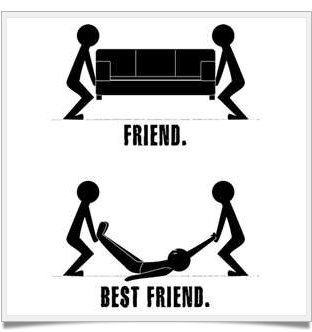 Hmmm...I don't know how to interpret that. Are they helping him or trying to kill him? lol

Or get rid f his dead body.
Top

Looks like the couch is being used to hide the body

The idea being that a best friend is one who would do anything for you without question.

Ah ok I get it. Though I had my shares of betrayals from best friends.
Once I was forced to move to a different school in my early teen years. I left all my friends without saying a proper goodbye, was pressured to do so by my mom etcetera. I felt truly bad about it but I was scared too, of the teachers getting to know etc. I did try to argue against it, but apparently a chance of better grades at a different school was enough for my mom. To abandon friends. Not for me. Because no matter what I could never get such a good and funny gang again. Some teachers hated me and gave me impossible to answer questions etc. And bad grades from that, so I guess grades were more important than friendship, not to me. But it was all against my will.
Now and then I still saw my friends but I kept my distance except the best friends that I had.
And well indeed I got the grades, but I didn't have friends there at the new school and I felt sooo depressed. And then after a while, the students/pupils just started to bully me, abusing my emotional weakness of missing my friends and all that.
My best friend eventually moved in to that school with me. But when things got tough and I got poisoned the next year and started to see a psychologist afterwards, and a shrink to get medication etc.
I used to be very passive back then and weak. I was the nerd to be target of every possible prank and more serious stuff later.

My best friend started changing his attitude, ignoring that some people stood around me and gave me hard time, though personally
he expressed a wish to throw a hand grenade into the changing rooms once.
And eventually after being absent for multiple months due to health complications and switching school because it was just too much to handle even if they turned most of the class on my side again....
then at that moment my best friend betrayed me to the crooks and the school gang. He blackmailed me with calling to a hospital that I was going to and telling them nonsense about me. My world was turning upside down and I couldn't stop the spiral. And then I fell in love with someone from the new school and then...no you don't need to hear all this heartbleeding stuff.
Top

Are we finished with the topic now ?
This seems to be general conversations now.