Is there any updated list with the active forums and sites?
Official (?) U1 v227/UT v469 .int and spanish localization fixer/maintainer. - Unreal Wiki
"Practice good sportsmanship. You were a n00b once, too." - UT3 Loading Screen
"Level Designers are 1 part architect, 1 part artist, 1 part game designer, and 1 part beta tester!" - Cliff Bleszinski
"The ratio of critics to creators is something like 10,000:1. The ratio of good critics to bad: 1:10,000 (where 'good' means 'helps advancing the art')." - Fast Eddie, TVTropes
"The projects that never start are the projects with the "idea man" as the leader." - Brandon "GreenMarine" Reinhart
Top

First post at the start of this thread, I update it periodically.

CRAP! We've got a spambot!!

Yea seem like they're starting to sneak in again, so far it's like 1 a few days, but yea we need to update things again :/
My work for UT99: Counter-Strike VP, MaleOne+ & FemaleOne+ voicepacks, DM-XC-NaliTreeV2 (from the 2012 Xmas Contest mappack), (NEW!) DM/DOM-20AC-CastleGeorgeV3 (from the 20th Anniversary Contest mappack)
my small spec of files at Google Drive

Next time please report those threads. That little exclamation mark in the right corner of the post is for such an instance.

Okay, something wonky going on here...

Was on Unreal Mayhem's facebook page today when I noticed a post for an entirely new site. Now the original site · http://unrealmayhem.com · is still there, though it's been dead as Hell for months.

The new site, with forum attached, is this:
http://unrealmayhem.com/test/index.php

Says "test" in the URL but it looks like it's been active for awhile.

UPDATE
Got a response on that. Apparently the old site/forum "broke" somehow, at some unspecified point.

It would've been nice to know that whenever it happened! 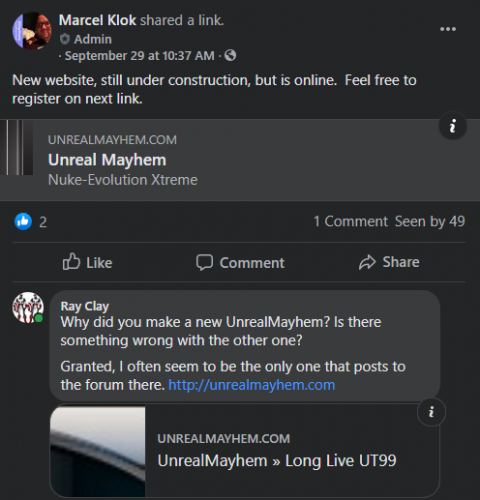 Don't know about that.

So, i've gotta register all over again?
http://unreal-games.livejournal.com/

yeah sorry about that my friend