by UTNerd24
So, I ran out of ideas to fill my bot list, and I thought I would look to you guys for some opponents.

So, What class, Skin, and voice do you use when playing UT? And Don't worry, I'm not a one to pick favorites. You will all be equally competent fighters.

I do know that the *late Feralidragon used Malcom with some sort of Warhammer style voice, and Waffnuffly is Vector with a Tourettes guy voice.

I personally use the PS2 Necris model with Malakai's face, since it almost looks like me IRL, even with the acne...

So how about you guys? Post your sona here!

by EvilGrins
Can't really help you out there.

I use a customized War Machine skin, from an Iron Man edit, for the most part:

Never released, cuz I always intend to add more team colors to it... though I don't really need to for my own use.

Typically I've got the Gorn setup with the Alien Critter voicepack.

by papercoffee
papercoffee or MaraudeR (but for the last 5 years the first one)
Skaarj-Hybrid - Pitfighter - Face Skrilax - red or blue teamcolour because without tc I don't get the cool suit.
Found a picture.

That head band and the voice make for ultimate s**t talking. Set jumpiness to yes because when I don't play with a controller, I dodge A LOT. Name is usually either Lann or Anubis.

by papercoffee
Oh I forgot play-style ...I'm that guy how jumps into a fight and loves to use the Rocket Launcher at close combat.

by EvilGrins
For the record, I think this is a cool idea of yours. I did similar a stretch back, but eventually toned it down.

Only one from all that I got left is medor: 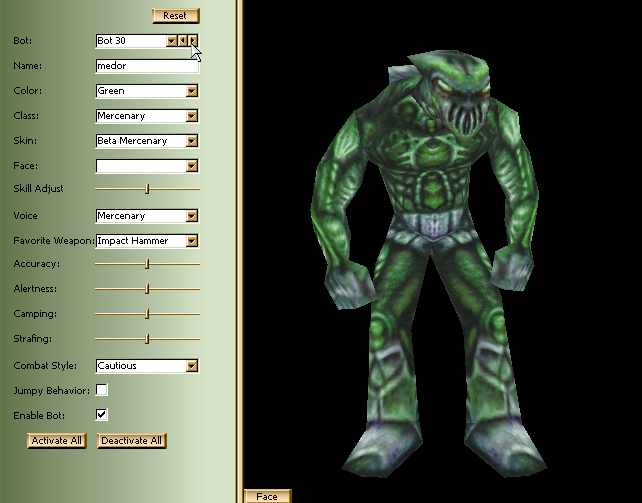