I made this skin a long time ago, and only changed the talk texture a little before setting it up to share with whomever this morning. It's a combination of 3 other skins with slight editing and originally I intended it for use in MonsterHunt primarily. 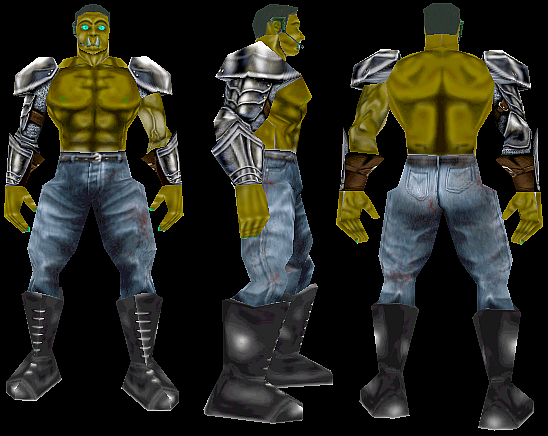 The short story is I knew this truly annoying person online who used various personas to antagonize others, so I assigned this skin to bots that I named after those personas. Kinda cathartic really, as those bots were setup to fail. Along with naming them as I did, I also took all skill setting for those bots and reduced them to 0, switched all their combat skills to Avoidant, and finally made them not at all jumpy. The result being bots who could shoot at you with a minigun, standing right next to you, and probably not hitting you.

As stated, I used 3 other skins to build this. The bulk of the skin is from the Orch, which had darker green skin. Because of the settings I gave this it's mostly cowardly, which is why I switched the skin tint to a more urine-yellow. The armor on the arms is from the Medieval Knight skin, and the jeans are from the Biker skins.

The reason I intended it for MonsterHunt is it largely only has team colors on one leg... 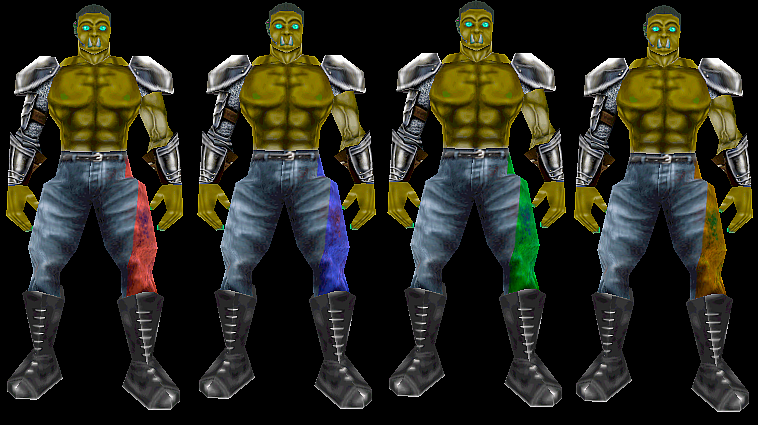 ...which are still visible to anyone who isn't standing on the opposite side of the bot wearing that skin. In MonsterHunt everyone's pretty much on the same team, so the team color is less an issue. Though I can see it okay in any gametype, I figured if I ever shared this skin other players might have an issue with the limited team color visibility.

Also for MonsterHunt due to that old zombie apocalypse joke, that the best friends to have during such a thing are ones that can't run as fast as you. With those setting the Nitwits move slower than most and largely stay as far away from battle as possible, which is handy in MH as monsters go for them and you can shoot the monsters while they're distracted.

For my own use, I assigned this skin the dk2troll voice... so I'm including that voicepack in the .zip, which, by the way, I didn't make that voice.