Discussions about Coding and Scripting
19 posts

this is really interresting!
can you tell a little bit more about the mod you are building?
Top

The OP was nice enough to let me peek at the mod and I must say that although I would do it a little differently (I think), his ideas have very real potential and I'm quite interested in how he does a release for this. It's worth staying tuned for.
So long, and thanks for all the fish
Top

So.. What ever happened to this mod?
Top

This isn't working/compiling for me. I had to make it "extend Mover" instead of "native" and remove the "native function SetBrush" to get it to compile. Then when it's used in a map, it crashes when a player joins.

Has anyone got this to work? Why is it "native" anyway?

*Edit:* got it to compile using "ucc make -NoBind" but now I can't import it into the Editor: 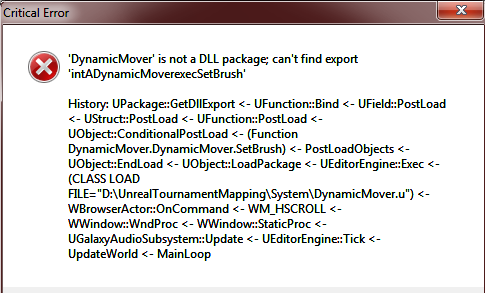