MrLoathsome wrote:Don't think the Tentacles have MultiSkin capability built in

Most of the Unreal1 monsters have a single texture to them, with the exception of the gasbag which has 2.

I convert .pcx to .png (true color) and then after I'm done editing them I convert .png back to .pcx (256 color). Works for skins, works for monsters.

Exactly 100% correct. (I knew I hijacked your screenshot thread for a reason.....

That AlCapowned skin you posted worked perfect. Converted to pcx, it just plugged right into the pawn code.
This is all I had to add to make that happen: (This is in the coding section, so here is some code.)

That is the exact format I would want to see any other skins in if anybody is actually bored enough to make them.

(Did Al or anybody else already do a new Tentacle pawn? Or is that skin as far as it got? I haven't even looked...

Here are a couple screenshots that show Tents with both the default skin, and the AlCapowened one: 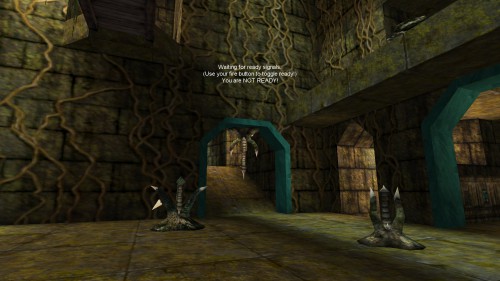 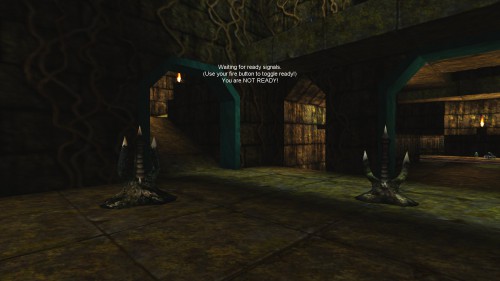 Note the one in the first screenshot that is in normal Tentacle orientation, is a default UnrealShare.Tentacle
that was spawned via MonsterSpawn303. Other 2 are UTents spawned by the SwarmSpawner mutator.


Re: Tentacle Projectiles.
You are also 100% correct. That can be done very easily. One line.

Look at these lines I had commented out at the end of the Demo3 source:

Put any of those into the defaults, or change that RangedProjectile value however you can.
(They get very dangerous with any of them....)

Tentacles can shoot anything you want them to with 1 line of code. (Always been that way....

I am probably going to include a new Ammo class with this, that will look like a Tentacle in Waiting/Pancake position.
It will fly like a Frisbee/Ripper and do a minor amount of damage if it hits a pawn. Then it will spawn a UTent* and destroy itself.

*(It could spawn anything. Even a Woody Woodpecker pawn. Soon as the rest of you lot get that project almost finished.

**Edit. Not sure yet if you would want to have this "New" ammo class spawning the same class as what was shooting it... It might make for a very cool crash.
Might have to add a check to see if the owner is the same class as whatever is being spawned, and throttle things back a bit to prevent the horror.

Pretty sure that would be a good check to add to it.....

MrLoathsome wrote:Exactly 100% correct. (I knew I hijacked your screenshot thread for a reason.....

Well done Loath. I'm proud of you!
So long, and thanks for all the fish
Top

And I am not even done yet.

This is all your fault you know. Just wait until you get the invoice for my time.

Here are some simple texture edits

Pretty simple to make with the right template, if you need something i could probably poop them out for you

Also, would it be possible to inject bloblette code and have the tentacles slowly climb up walls and ceilings?
Top

I've seen some moving tentacles, but I can't recall the maps they were on.

Having an option to make them move is already on the list. Seen them do it a few times in earlier testing
when I didn't have things quite right yet.

Still messing with the physics/rotation settings a bit to try and get them so they will stay in the orientation that
mappers initially place them in. Think I am making some progress there.

Those skins worked great. Resized them to 256x256 and reduced color depth to 256 and they plug right in.
Currently have 4 custom skins, and the default in there. File size did blow up from 14k to almost 300k
but that is worth it for the new skins. Will post a few more screenshots later. Lost in the code right now.

Had to tweak the SpawnCarcass function a bit so the carcass would have the right skin.
Added 1 line. This way will work with pawns even if their texture changes after they spawn.
The carcass will always match the texture the pawn had when it was killed.

Here is the code that does that:

Anybody know offhand if there is a way for an Actor to detect the Class/Name of the Texture of the surface it is resting on?
blarg
Top

You could ask Ferali Dragon, the nuclear weapons break chunks of the map that have the same texture so it probably will shed some light as to how to make that work for the Tentacles.

New challenge: Mini Tentacle helmets for Player models. I'm quite sure it can be done.
Top

UTX wrote: New challenge: Mini Tentacle helmets for Player models. I'm quite sure it can be done.

Oh. That sounds awesome! If you can try make that code modular. So I can maybe place a Custom MinigunCannon on a players head sometime XD

Edit: Unless you meant a model extension(Or an actual hat. Cosmetic). A pawn on another pawn's head like that does sound kinda....undoable.

I always try to make everything customizable in some way.

And you just gave me two ideas:
- A map that is actually a huge player model, so players feel like bugs on a giant.
- A mini player on top of each player that mimics its model, skin and movement. Similar to those statues that show which player is on top, but each player has it's own mini-me with themselves.

And I didn't think it as modifying the models, just add the Tentacle model on top of them. I know this can be done because of the Shield Belt effect, it follows the player around. All it needs is to be spawned at the right place, in the right angle, using the Tentacle model and skin, with the correct draw scale and some random animation and boom, Tentacle helmets.
Someone once asked about Xmas hats for players and now I think it is possible, with a Xmas hat model.
Top

Or jumping tentacles while we're at it.
Top

Oh c'mon is this all you can come up with ...walking and jumping?
My suggestion: A playable tentacle as a player skin for UT ...feign death would be the tentacle retracting in it's flat form.

But what about a space tentacle? It could be placed as bio-turrets for organic space-ships.
That would mean you can't kill it but disable it like the default team cannons.
-=: http://jokercologne.deviantart.com/ :=-

Ok, this is enough, STOP THE SPAM.