by Gustavo6046
Hello again, folks. I am back, and this time, I got a whole new map for you!

I took an awesome terrain guide, and I'm quite proud to here present the results... 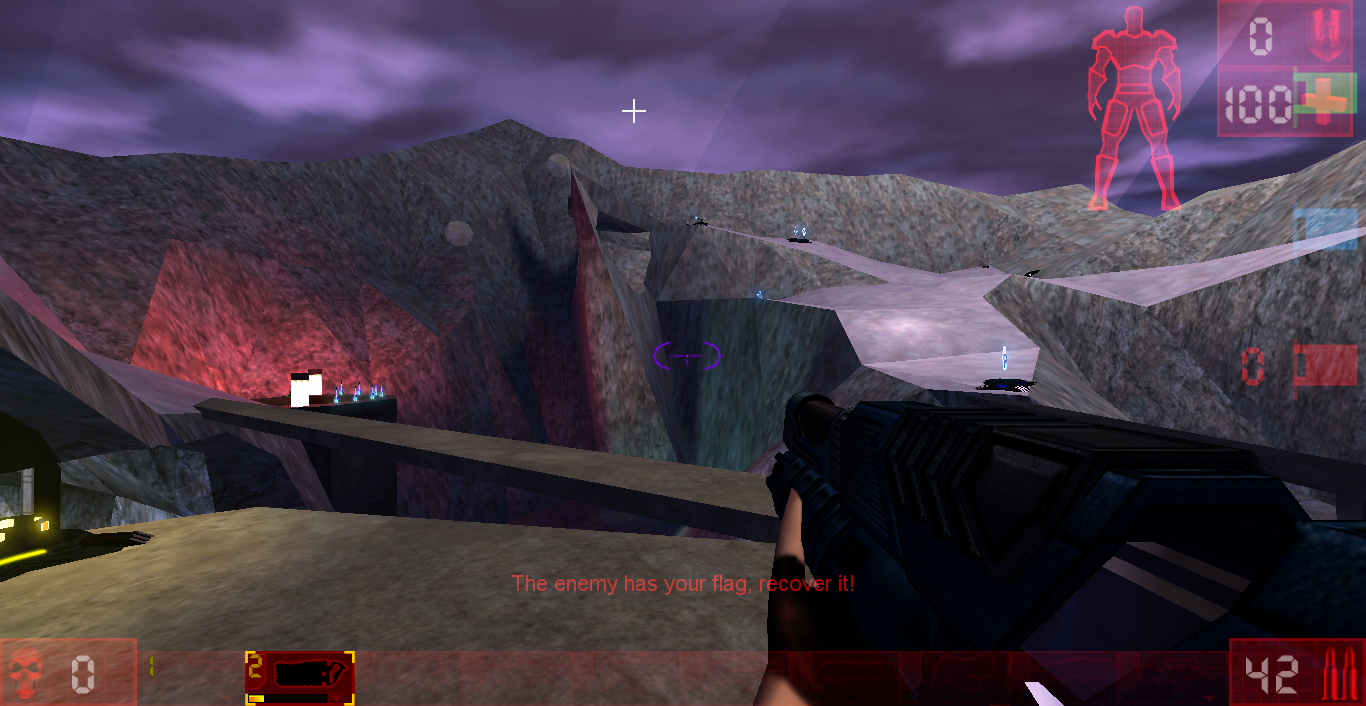 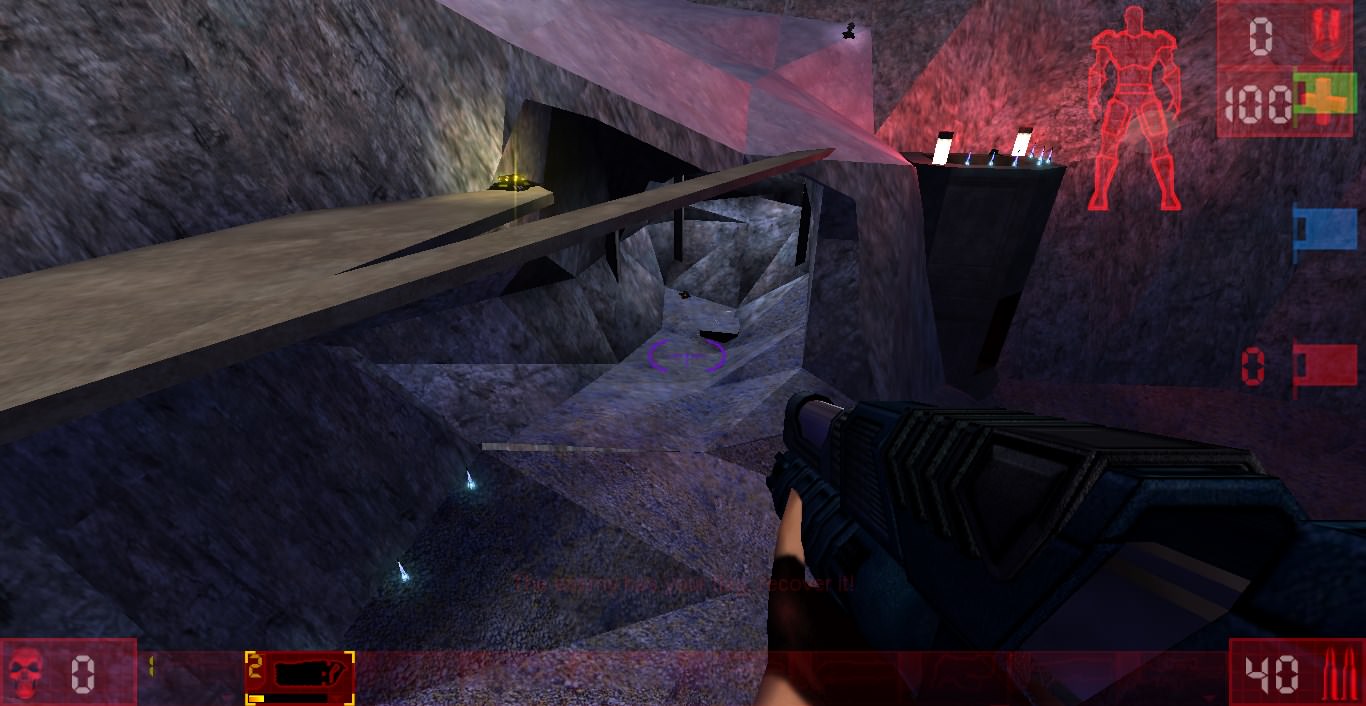 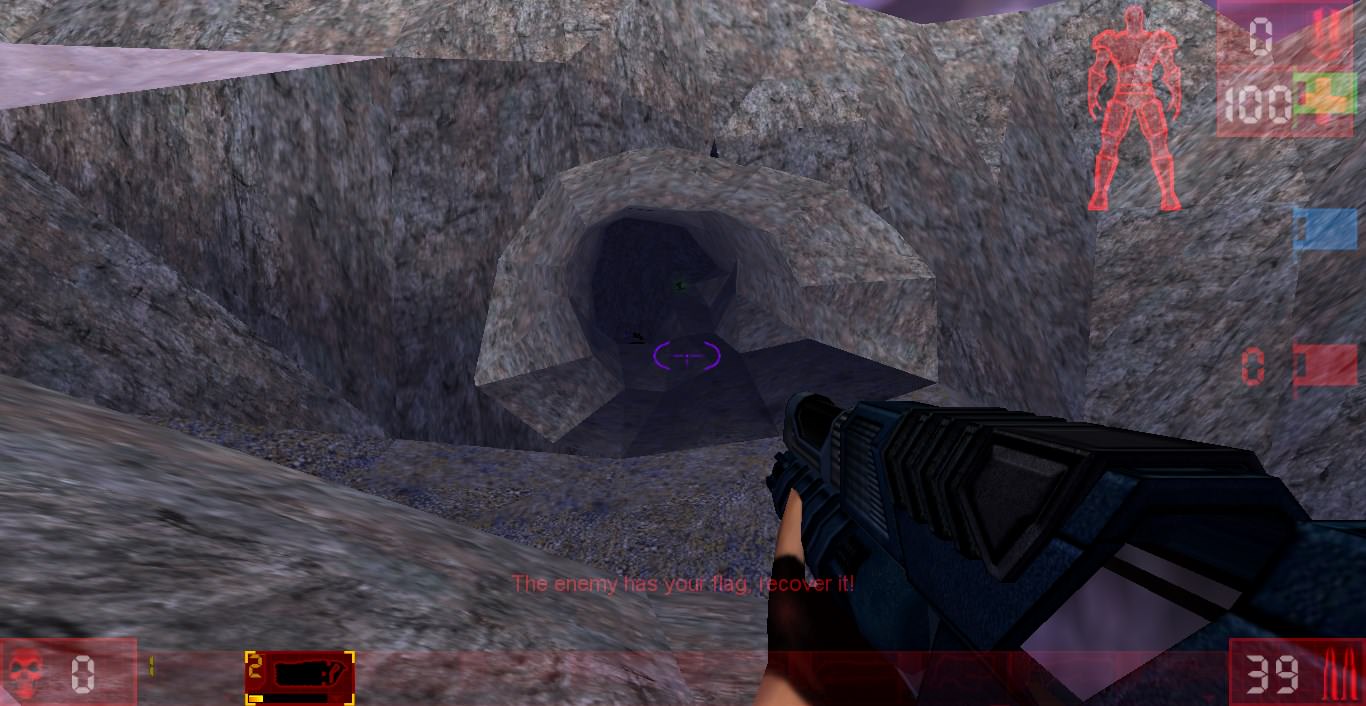 2) How dare you make a nice looking map while I don't have a computer to play it on!

2) How dare you make a nice looking map while I don't have a computer to play it on!

2) I NEED to make nice looking maps. People know me because of shitty maps (see GusPack 1), but that will not be true this time!

3) It's pathed. Just path nodes, player starts, a teleporter, and a few pickups/weapons, but those do the job. I'm thinking about using DeathoX8's BotPathNodeUsage to investigate any possible issues with the network.

EDIT: Just a question, does this look better? 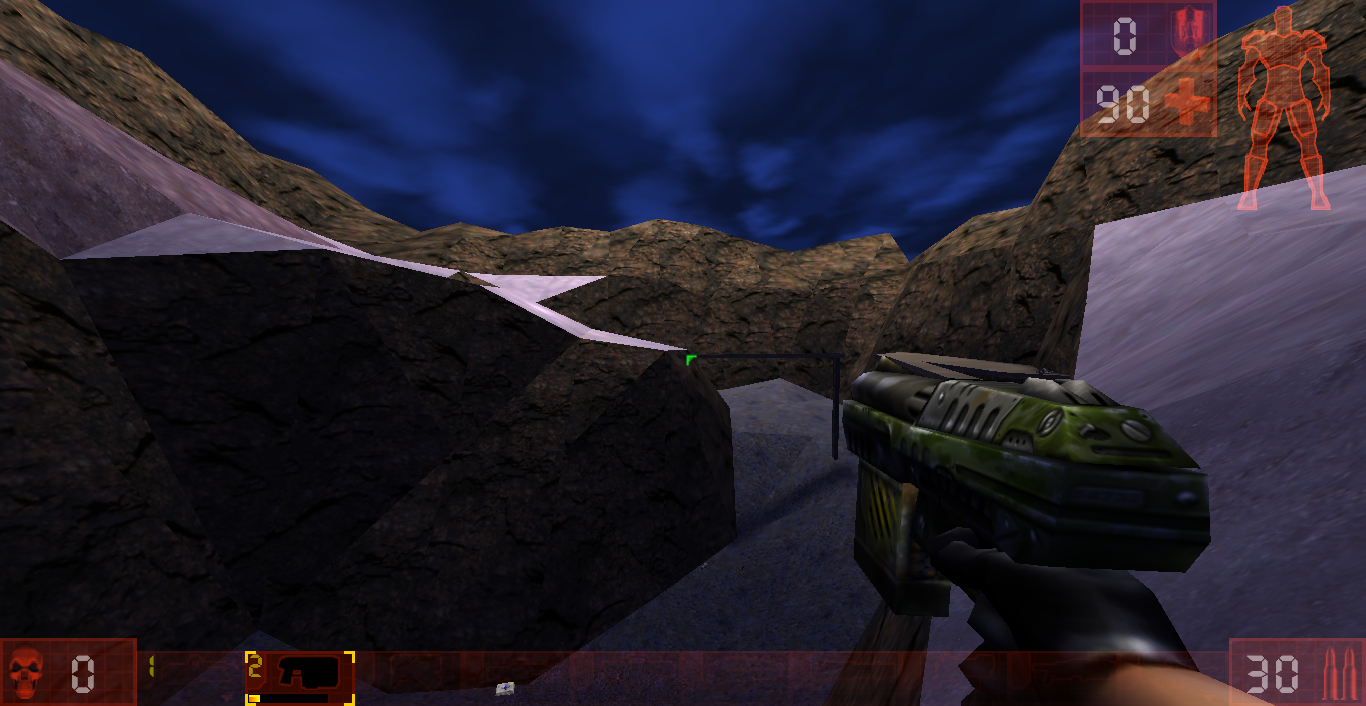 Gustavo6046 wrote:I'm thinking about using DeathoX8's BotPathNodeUsage to investigate any possible issues with the network.

I did not use anything like that - irrelevant if Bot wants to hunt Player and he does need all Nodes, but... map has some borked point.

[attachment=0]DM_Davva.PNG[/attachment]
This is lost, routes do seems heavy in that spot - Editor opinion - game can go different but Editor does paths, I did not check the game yet for possible BSP troubles or other lost links, this is primary check. In future maybe I will write a better checker to see exactly what ReachSpecs are saying for a particular case...

A bit, darker adds character but overt mixing of snowy and rocky may be a bit overdone.

by Gustavo6046
Thank you Nelson (@sektor2111). I have noticed a few errors in the pathing (bots running in place), and I am currently performing effort to fix the situation. Please be patient. 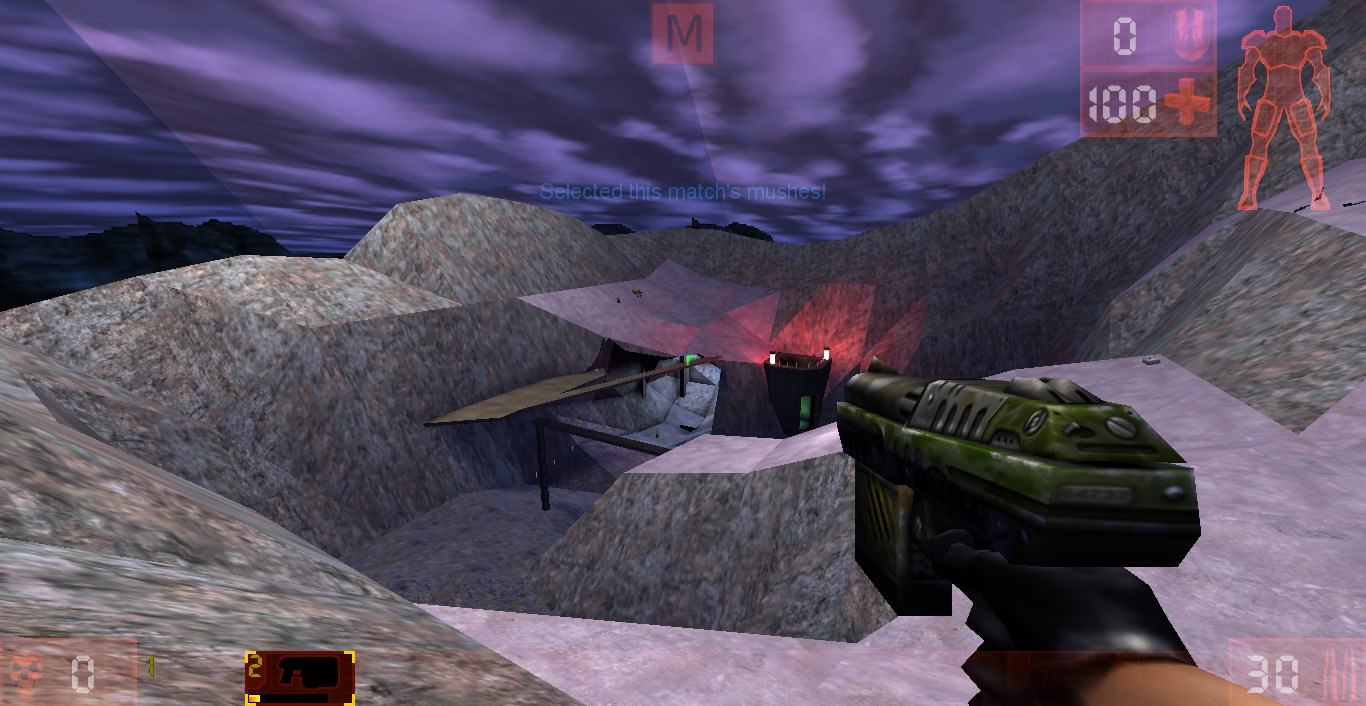 by Hook
Well it is looking good so far.
Keep going with it!

by sektor2111
Yeah, keep releasing mismatch files. Didn't you post another the same named version ? Did we talk about naming stuff or not ?

Hints:
1 - You could set them as bCollidingActors and look at their cylinder then decollide them to default setup when are ready;
2 - In such terrain type environment set nodes with a lower collision before adding them in map, avoid moving them manually and let Goblin to put them as they have to. Default PathNode properties won't help in ramps because UE1 has DevPath optimized for Skaarj not for Bot - nothing was changed from Unreal to UT at this point, only a few small things.
3 - If some node doesn't show in a spot check the spot in game, if location is OKAY then set node bCollideWhenPlacing=False before adding it in that spot. You have to test later how is connected.
Goblin's fake news:
- PathNode 17 and 33 have a blue line between them but... both of them are listed as VisNoReachPaths to each-other which means that maybe only by flying you can travel there. Credit for such a crap goes at Epic. Like I said, a blue line means Scout can be moved here without touching Level but having Alien-Unknown physics type - PHYS_Falling, PHYS_Walking won't work here.

Lift is done correctly - here I have to say that you can teach a class about lifts to kick in balls a bit those grognards who think they know to setup lifts - by their guessing work. A single problem, ammo around lift don't seems very well connected with the rest, they are accessible only from top.

by Gustavo6046
Thanks for reporting those.

I will have a (named) Version III (DM-Davva-v3) coming, with the pathing as priority; for now, Only stabler files (guaranteed to work) will be put in the first post.

by sektor2111
Ahah, now let me quote some changes here in a temporary version which I modified for checking if it's suitable for monster-gaming.
- PathNode26 set back to normal height - was almost buried;
- a Navigable ramp has now paths;
- other nodes have been located to navigable spot rather than beyond ledges and normalized to default height placement;
- ammo around lift is accessible from down area as well;
- BlockedPath removed because it's pointless;
- InventorySpots are placed more friendly toward their inventories;
- Biorifle is being restored to normal collision - there is no reason to have it bigger at all;
- All Actors have been relocated to fixed X,Y,Z axis values using default Engine placement solution - this was my builder doing the job for me.

Play-Testing:
Bots are playing well, BotyMan3 tester doesn't do any mad behavior for human in bot suit. But... map won't reach in my gaming repositories. Somewhere at bottom nearby newer added cave entrance there is a nasty ledge causing BSP borks which are ruining game flow, I did not see that in first version. Maybe I have to manage fixing first version rather than next modifications.

by Gustavo6046
Damn, this map is way too full on BSP. It has lots of cuts! I tried to patch it up, but I'll try to make another map instead.

by Kajgue
Gustavo, I haven't played the map in UT (I don't think that I currently have UT installed) but good job on the good looking outdoor geometry.

If you're having BSP problems with this then there are some tricks you can use:

2. If you are using a large subtractive brush for your outdoor area with your terrain geometry integrated onto that brush, remember that additives brushes and subtractive brushes structure the partitions of a map. If you have mountains with open volumes behind them making the process of structuring the partitions of the map tricky, (while maintaining the brushmodels' valid UE structure in whatever modeling program you are using by ensuring that the whole brushmodel is a continuous solid form without gaps or holes) consider separating the occluding geometric feature into a separate brushmodel and then adding it as a semisolid. This will make the partitioning process less complicated for the editor engines compiling process.

3. If you cannot find the means to properly keep solid intersecting verteces (where two or more surfaces on one or more brushes which clip through each other) on the grid, consider using semisolids for all or any additive brushes which can cause problems here.

I can offer you an example of a rather large outdoor map (spare a few BSP holes on unrelated/indoor parts of the map which I hadn't really got around to giving much tender loving care to, but probably won't be able to for a while due to juggling multiple commitments) which practices some of these tricks, and actually fixed the BSP problems that once occured on the parts of the map which now uses them. Though, the map is Unreal Gold 227J exclusive (can't remember which specific version of J and above that it runs on, but if you're a betatester I'd just recommend looking at it with the latest version of J).

by Gustavo6046
Thank you for the suggestions! I bet they will help a lot while I try to fight the bugs.


EDIT: Much improvement has been done, for Davva v4!

by UnrealGGecko
I feel like you should remove the older versions or at least put the latest one on the 1st post.