If you have found new Downloads or created something by your own, please announce it here
11 posts • Page 1 of 1

What's new in version 2.01?
Version 2.01 fixes some bugs.
Version 2.00 is mainly a maintenance update to be independent of ACE by listening to the NexgenACEExt plugin.

About
The main goal of the Nexgen Advanced Ban Manager is - as the name suggests - the improvement of the existing ban system in the Nexgen Server Controller. It offers reliable functions to keep unwanted players out permanently, as it makes use of the hardware Information detected by ACE. On top of that, NexgenABM also includes the ability to ban via the player's hostname. Both, IP and hostname bans offer support for Ban Masks, which allow range banning and precise specifications.

Nexgen's original Ban Control tab has been completely revised, creating the necessary space for including access to all ban parameters. Besides that, a polished Ban Search panel has been added to complement the interface.

Coming with NexgenABM is the use of the TCP implementation in Nexgen 1.12. Nexgen's original ban data was sent using UT's standard replication method, which can result in long client initialization with a full ban list. NexgenABM's banlist initializes the clients way faster.

The plugin also extends the administrative functions by a warning function, which will pop up a window on the target client, forcing him to read the warning. Also, warnings, kicks and bans will now either include the account name of the performing admin, or hide it if desired by him. 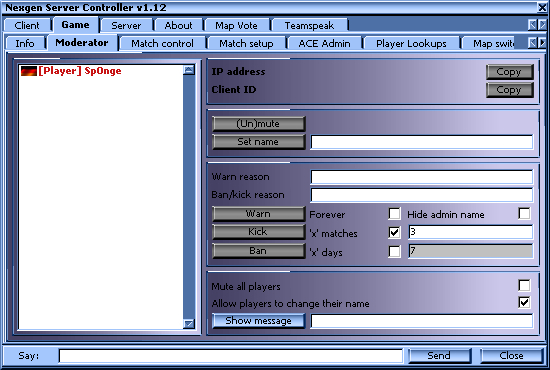 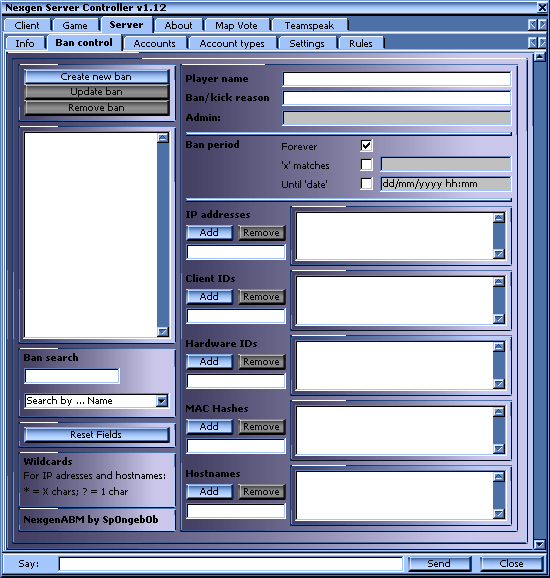 Nice work spongebob with the admin name like in Nexgen112N.
I hope nobody have more than 256 bans on ther Nexgen112N because the plugin give only 256 instead 512. I'm not sur that is realy nessecary to increase to 512 because the server are less full than in the past. But i think that was a good thing to make know that.

First post updated; I recommend everyone to update to the new version 2.01 and also update NexgenACEExt alongside.

Can this please be compiled for nexgen112N? Is there a reason why all new nexgen mods are not compiled for the latest version of Nexgen? there was another Nexgen mod I wanted to use NexgenATB (auto team balance), but it also doesn't work with nexgen112N
https://www.vulpinemission.com

They are compiled for it, go check the release page. I'm only linking the official releases for sake of clarity (112N is not the latest official release, but 112 is).
Website, Forum & UTStats

Right, forgot about that. No custom popup for that required though, it was supposed to go behind the ban period label since that one is quite short anyway. Will fix that with the next update.
Website, Forum & UTStats

Sp0ngeb0b wrote: ↑
Sun May 03, 2020 11:03 pm
Right, forgot about that. No custom popup for that required though, it was supposed to go behind the ban period label since that one is quite short anyway. Will fix that with the next update.

I had this idea because in the MHA edition I find it more readable the way I did. But we can also put the name of the admin in bold for more readability
<[MHA]>Letylove49 aka Shado170
Top

i have a ida for your plugin, you could add a fonctrion to reduce the score of the player on moderator tab if possible with the possibility to chose the amount of penality .
<[MHA]>Letylove49 aka Shado170
Top
11 posts • Page 1 of 1