If you have found new Downloads or created something by your own, please announce it here
Post Reply
45 posts

I just deleted the PCX files and started UT99 but it was still displaying them. Are they cached somewhere? I deleted the cache files in the UnrealTournament Tournament folder, is there anything else? How can i test the adjusted PCX if UT doenst care what happens to them?
Top

Your game cannot use pcx files, only the ones compiled into the U or utx.
So long, and thanks for all the fish
Top

OK i didnt konw that, since the PCX folder came with it i thought it was using thoose. Can i create my own u file withe the editor?
Top

Sure you can, but it's easier to do it with external tools. Grab this:
http://utrustedplayer.com/gopostal/codingschool.zip

This is my zip so everything in it is safe and tested. Out of this folder you need to drag the UccComp v2 to your desktop (no installation). Now let's do this:

Step 1: In your base UT installation create a folder. This is the same place where you see other folders like Maps, System, Music, etc. Call this new folder something unique like NuffBleeding or somesuch.
Step 2: Out of the original zip file for the mod you get the folder called "Classes" and put it in your folder you created. This is the source code for the mod.
Step 3: Along with the Classes folder you need to create another folder called "Textures". Once you do this then drag the pcx files from the original mod zip into this folder.
Step 4: Overwrite the original pcx files with the new ones you worked on leaving the ones you did not work on alone.
(Now, why did we do that? Well it's to ensure that all the original files are there and that the ones you want to edit were edited. Don't change the names on any of the files though)
Step 5: You should now have a directory structure like this...Unreal tournament opens into Nuffbleeding, which then opens into Classes and Textures folders. As long as this is right you are close to done.
Step 6: Click the UccComp exe file. Fill in the UT directory at the top. Mine is "C:\UnrealTournament\" for example. Now fill in "Name of Package" with your folder name like this "NuffBleeding.u"....Remember to make it exact and to also add the dot u to the end.
Step 7: Hit "Compile File" and you'll see it log the compiling. If it all goes right you should have a brand new .u file in your system folder ready for use.


Now if all this works fine you'll need to make some edits to the other files so they know your new mod exists. From the original zip file open the ini. The top line reads:

You'll need to edit that to

and save the file as "NuffBleeding.int"

Now if ALL this is done right you should have a shiny, new, ready to go mod. Please credit Loath profusely if you release this because he made it so easy by including the source. Not only did he allow his work to be modified he might have gotten someone else to catch the dev bug

Thanks, in a quick test my files looked good. But lets see what the original creator of the mod does with them. For DecalStay it would be great to have the option to have it always enabled. Since i quickly hop in and out of games always closing UT and loosing my settings. 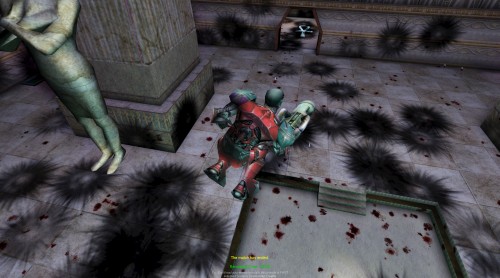 I actually spent a little time looking for a way to have the DecalStay default to being on, but I was unable to track down
a way to make that happen....
blarg
Top

It's possible to force the setting onto the client and then monitor for a framerate drop to destroy some decals to bring it back up. I'm just not a fan of ever altering client settings that are meant to be strictly client controlled. We all remember the auto-save favorites fiasco don't we?

Still as a stand-alone mutator that someone could choose to install it would be fine to do that I think as long as they clearly understood that your mod was going to make alterations/override what was possibly already set. Online play is where it would get tricky.

I used to not be a fan of blood and gibs and stuff but Loath has brought me around to it.
So long, and thanks for all the fish
Top

MrLoathsome are you going to update your Blood mutator? The new graphics work perfectly:

I hope to eventually. Been working 6 days a week lately, and haven't had any time to even look at any UT stuff
for more than a few minutes......
blarg
Top

JackGriffin wrote:It's possible to force the setting onto the client and then monitor for a framerate drop to destroy some decals to bring it back up. I'm just not a fan of ever altering client settings that are meant to be strictly client controlled. We all remember the auto-save favorites fiasco don't we?

Still as a stand-alone mutator that someone could choose to install it would be fine to do that I think as long as they clearly understood that your mod was going to make alterations/override what was possibly already set. Online play is where it would get tricky.

I used to not be a fan of blood and gibs and stuff but Loath has brought me around to it.

Exactly. I guess I didn't make that as clear as it should be in the Readme.txt file. One of the things I hope to include
with MoreBlood RC8.0 will be a better Readme, or perhaps even a HTML documentation page.

I just had to update DecalStay so it would support the new decals. I did not change anything at all regarding how it works other than that.
It will work fine if you turn it on and then play online, but as far as servers are concerned, it is irrelevant.

What the original author, (Mongo), did with this was a bit different. It fires up a "decalticker" class directly from the UMenu.UMenuModMenuItem.
So as far as I have been able to figure out, the only way to get it running each time you start up UT, is to go to the Mod Config menus every time....

When I was mentioning having DecalStay on by default, I was referring to some way of having it enabled as soon as UT starts, so the client doesn't
have to turn it on every time. Ideally via an "Enable at Startup" checkbox in the config menu, but even some sort on int hack or something that
the user could adjust manually would be better than nothing, which is what there is now.

I should be able to get started with this in just a few weeks now I hope.

In addition to updating the decals with Nuff's fixed versions, I am going to merge my most
recent MoreGore code with MoreBlood for the next release.

Jack suggested that last month when we were chatting, and it must be a great idea as I was already thinking about it.

Note, even after I get working on this, it will probably be several weeks or more before I actually release anything.
I intend to spend some time looking close at all the code to see if I can optimize it further. May add some new effects
if I can think of any and make them work right.

Will start a new thread for RC8.0 when it is done. If anybody has any comments or suggestions before that, might as well post them
here.

(Sorry about the double post mods. My previous reply was a bit brief, and I wanted Nuff to know his efforts will not be for vain and
also wanted Jack to know his input was helpful.)
blarg
Top

I have no time, and probably wont have any time to fuck with this crap anymore.

I deliver pizza 6 days a week now. Nobody is hiring 50 year old programmers/IT guys for anything anymore.

If anybody else wants to waste their time with it, go ahead.

I am done.
blarg
Top

Damn ...somehow bad news.
Do you get well payment at least?
-=: http://jokercologne.deviantart.com/ :=-

Loath, I'll trade seats with you my friend.

It'll all work out, you wait and see. You are a good guy and good things happen for people like you. Just give it a little time.
So long, and thanks for all the fish
Top

Yes MrLoathsome, Hang in there buddy!
My wife and I both lost our jobs, but found some that were not too bad now.
Not very good pay, but we like them better than our old jobs.
We are both going on 58!

At least you have a job to complain about !
How about starting yer own Gamers Pizza shop? "Unreal Pizza"
The delivery vehicle could have "Stop me and Frag one" on it.

Every day is a cycle, but every day brings new options, as it also ends others.
Life is not static. And a new year is almost upon us.

There are a few notable members of this site, who are in need of new jobs, and my wish for the new year is that my online buddies are well looked after.

Back on topic though.
If any future development of the blood and gore mutator happens (Damn it, the 2 people I'd get together on this, both already are, and are both in a bad patch), I would like to point anyone interested in continuing on this, to have a look at the conversion of Runestorm's Ballistics Blood mutator http://www.unrealsp.org/forums/viewtopic.php?f=3&t=1887 for Unreal 227.
I am guessing that it uses stuff we don't have in our UEd, but if the SDK can give those options, I think it could be a major asset to UT.