This ALL NEW Server and its New Redeemer Mod is Now OPEN to the PUBLIC!
Yep, I told Lucifur to let her rip! We are Live!

We will be using the "PirateDeemerCMM" BETA version 006 for the time being.
(The "CMM" stands for "CROSSBONES Missile Madness" - Yep it is Back!)
This "Beta" version is still Not totally complete or finished, but it is already a Very Good redeemer mod and is totally FUN!!!

There are just a few more things that need to be done/added to this mod.
When the finished version comes along in a few weeks we will Update/Upgrade to that version and it will be even Better!

This NEW "PirateDeemerCMM006" mod will be featured in Columns 2, 3 and 4 of MapVote, at least For Now.
And, even though Columns 2, 3 and 4 of MapVote all use the very Same New "PirateDeemerCMM" mod, it will be hard for you to even detect this.
Virtually all the people who have been playing the server refer to the different configurations as whole different mods, even though I keep telling them that these are all the SAME mod! LOL
Column 1 is a different mod though.
Column 1 is an Older Redeemer mod version that is very well liked, so I thought we should Bring it on Forward along with the new stuff.

The New "PirateDeemerCMM" mod is set up "Modular", so changing it to just about Any Redeemer Configuration is a Snap!

The FUN Laser Sights and ValhalaAvatar are back in also! YAY! By POPULAR Demand!

We may add more information HERE Later when needed!

) about this new redeemer mod, and the USE of it, visit -> Hook's UT Place.
http://hooksutplace.freeforums.net
EDIT...
How to USE it Link is HERE

PirateDeemerCMM006 - OPERATING
UPDATED How to USE it Link is HERE

Just let us know if there is Some Special Configuration you want us to try...
OR, is there some Tweaks to how it is currently set up that you want us to do or try?
Just Let Us Know!

We can do just about ANY Configuration to OUR Redeemer mod that YOU can think of!
This mod is the Most Configurable and Flexible mod for Redeemer out there, anywhere Ever! :woot:
ONLY Here at our New Server - Now!

HAVE FUN and ENJOY!!!

Also, Just a bit of Feedback I just received in a PM to me... (I will hold out the name for now)

I got a chance to play on the server last night and even sparred with Keller for a spell.
Man I haven't laughed so hard in a long time.
Fantastic work to you and all the Coders on the new server.
Boy would I love to have the creeper spawn once in a while on my MH server....LoL!

After nearly a half an hour of pulling down packages....I get a DE version mismatch and can't connect. I understand it's a test drive at this stage. The next had ought to be some redirects.

EDIT : I reinstalled the 4.36 nodelta and got it running. Still man....line up some redirects.
Top

synaesthetic wrote:After nearly a half an hour of pulling down packages....I get a DE version mismatch and can't connect. I understand it's a test drive at this stage. The next had ought to be some redirects.

ALL is on a very fast Automatic redirect.
Any file that is not stock will be redirected. (are you missing some stock files?)
Get rid of your "de.u" file, or put it somewhere other than your system folder for now.
A new one (the original stock one) will take its place.

If the redirect is slow to START up - wait - it will then go fast.
Once a file has been downloaded by anybody, the next time it will have an immediate start.

The server is hosted on GameServers.com as are most I would guess.
Good luck.

EDIT: I see you are IN the server now! - Have FUN!

If that was you I was battling....touche. Sorry man, the redirects didn't work at all for me. It just got pulled right off the server. I'm trying to pin down some NIC driver problems on my end. The POS that is it tries reconnecting to my modem at gbps speeds when the modem only does 100mbps. Since the modem can't negotiate that connection speed the connection dies on my end. It seems to happen when I'm pulling down significant bandwidth.
Top

synaesthetic wrote:If that was you I was battling....touche. Sorry man, the redirects didn't work at all for me. It just got pulled right off the server. I'm trying to pin down some NIC driver problems on my end. The POS that is it tries reconnecting to my modem at gbps speeds when the modem only does 100mbps. Since the modem can't negotiate that connection speed the connection dies on my end. It seems to happen when I'm pulling down significant bandwidth.

We had one other guy that had some problems with fast redirect downloading, but for the most part his worked good.
You are another.
ALL other players had Very Fast Downoads.
GameServers.com is having a few problems at the moment (I just found this out) so maybe that is what affected your entrance to the server???
Maybe just a glitch is all. (bad timing?)

Anyway - Thank you for trying it out and for the feedback!

I'll give it a few more turns, I'll fill you in when I've had enough.
Top

Any ideas? A 5 meg download of a map came in a blazing speed, like you had said before. I suppose that much is working. Any ideas on this though? 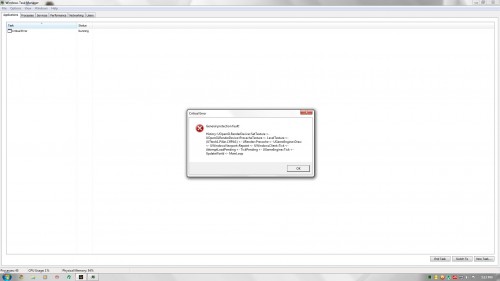 General Protection Faults - hmmm?
Well the server didn't crash and no errors were at the server end so this one was on the client side as far as I can tell.
It happens in UT quite a bit that I have seen and read over the years.

Did you install any Hi-Res textures? (I see the OpenGL reference in your pic)
That could be your problem.

If anybody else can decode that GPF error shown - let us know.

Well it looks like you were able to play though - Thanks for you feedback, if any.

Yes, all the current hi-res packages are installed. It did this several times when trying to connect. And I'd think it safe to assume the map had changed for a few attempts. Same crash.
Top

Hmmm - were there people playing on the server at the time?
Also, what is your Player Name?
Do you remember which Map(s) was loading?
I'll try to pinpoint in the logs exactly where you were trying to come in.
I will try to see exactly which mods were running, just in case this MAY be a problem, but I don't think so.
Our "default" mods are pretty common, and tried and true. (our New Mega-Deemer for 2011 is Not our default mod when entering the server)
Only thing is, no one else has had any problems at all. You are the only one - so far.

EDIT: OK you were coming into a "Vanilla" Server start up with no players, etc...
Well, here is from the log where you were and what was going on...

* All normal stuff above here. *

* All normal stuff above here also. *

* All the above mutators/mods have been used a lot without any problems either. *

After this it is same ol same ol reloading default server stuff.

I am guessing it is a driver or those hi-res textures on your comp is all I can think of.
OR, it could very well be the Map that was running had some bad "stuff" in it? (DM-Cathedral)
Or could it be that "Default Redeemer" mod shown abovve??? (not widely used or known about)
Bodens, Laser Sights and meToggle210 have all been run and run with no problems and on lots of servers.
We have used these mods/mutes for years without any problems that I have heard of.
Like I say, GPFs have plagued UT since the beginning.
My comp is a late 1999 model and I haven't had any problems running this stuff, really, just a GFP once in a while and has happened on any server or even offline.
It just happens sometimes.

It doesn't look like it's anything on your end Hook. I wonder if reinstalling the 4.36 update hosed it all. I get the same crashes when starting a bot match local. The one map that I did get in on with your server was Cathedral. The me leaving message was when my connection died. That much I know is NIC drivers with Win7. As for why I only connected once after 4.36 was reinstalled and now EVERYTHING crashes I have no idea. I'll take a closer look at what's going on here over the weekend.

Edit : So it turned out to be something stupid and obvious. 4.36 overwrote the OpenGL driver with a far inferior one.

Hey, I am very glad to see your "EDIT:" above, and glad to see that you have played the server quite a bit now.
And, I am Really glad that you got it all worked out now - that is great.

Thank you - and I'll see you there, and I hope when the regular players are on the server also!

Usually several jump in, especially when there is already some there.

This is TONIGHT and TOMORROW Night - see you there at {CMM}

I'll be there around 9:30 PM Central time! Same on Tuesday!
Top

Hey - Our Open House / Grand opening for {CMM} was a Great Success!
We had pretty much a Full House on Monday evening and a 1/2 to 3/4 Full server for quite a bit of Tuesday evening.

Thank you all, Regular players and New players, for stopping by our New Server, and for trying out just Some of the Many Configurations of our New Redeemer mod for 2011, and beyond, the New PirateDeemerCMM!

Great FUN and Good Cheer was had by all!

One nice gal "Dojo" who was on for a lot of the evening had some refreshing comments...

"oh my god this is too funny, was laughing so hard I was crying"
and...
"I was the rocket most of the time, and I was like run.....run...forest....ruiuuunnnn"
and...
"this would be awesome on one of the original huge maps like lava giant"

Of course we then voted to play DM-LavaGiantCMM and had a Blast! (Literally!)

Of course there were a good number of other all good comments like "This is Awesome!" and "This is Sooo Fun!", etc.
Thanks people!

Again - Great FUN and Good Cheer was had by all!
See you all Next time!