How do you play MonsterHunt?

Discussions about GameTypes
5 posts • Page 1 of 1

How do you play MonsterHunt?

Yesterday paper played one of my map edits and said he was quickly overwhelmed, which got me to thinking. Map in question averages about 10 to 15 minutes playtime and while it's got a nearly endless legion of foes, eventually the counters wind down and their troops run out of supplies.

I've seen this edit of mine played on someone's server before, and when I played it with other players what struck me odd was they all cowered in their base and tried to snipe the legions of BetaKrall from a safe distance... which seemed weird to me.

· More often than not I play MH with the Excessive health/ammo regenerator on, which keeps bringing me back to 300 health.
· Very rarely go the sniper route. With any monsters I fight I'm usually fighting them nose to nose, with a rocket launcher or minigun or pulse gun. I fight in very close quarters against most every monster type.
· I have backup in the form of bots, usually 4 and sometimes 8 depending on circumstances.
· Not one to use limited lives in MH. I've got an unlimited amount so I'm not terribly worried if I get killed.
· Tend to cruise the redeemer about 10 feet above the heads of my enemies and explode it above them, gibbing dozens at a time. 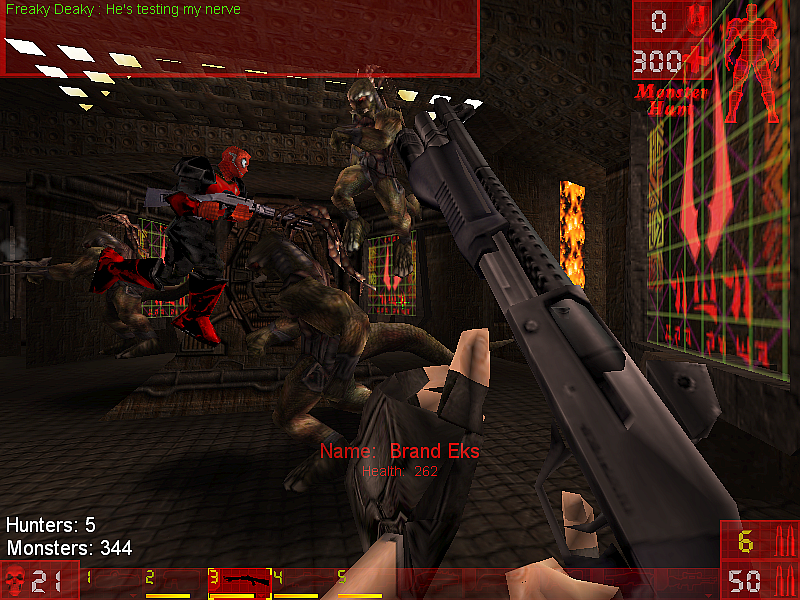 Playing without bots or other human players makes little sense to me in MH. If I wanted to fight on my own against overwhemling odds I'd do SP; Single-Player campaigns.

How do you (whoever's reading this) play MH?
http://unreal-games.livejournal.com/

EvilGrins wrote: How do you (whoever's reading this) play MH?

More or less the polar opposite of the way you do (though I do use unlimited lives and time as well as a health regenerator but not one for ammo unless there is a lack of ammo on a map). I play MH as SP basically (no bots) - only play maps that are doable as a SP (a lot of the good ones are), sometimes using MHMapAdjuster to limit the numbers spawned if these are excessive (too many for a singe player) but the map is otherwise of interest in one way or another. Tend to advance slowly, taking out as many enemies as possible with a sniper rifle or other longer range weapon - so stealth rather than face-to-face confrontation except where, of course, this is necessary. Tend to use Counter Strike weapons which, admittedly, make things somewhat easier.

So a fan of large maps - not a fan of the 'kill 100 of this in one room followed by kill 200 of this in another room' type maps nor, in general, of those that start off with pupae and work their way through the basic monster types. Prefer stalking and hunting, in an interesting and varied environment; and a variety of monster types, not necessarily the standard\default ones.
Top

It depends on the map for me.

I quite like sniping for a bit but am also keen to jump right in to the action.
However, on some maps that just isn't possible.

Hitmans UM MonsterHunt servers are a great example, in particular the NW3 MH server he runs. Monsters with insane health levels and firing deemers etc in some cases.
You would never finish some maps if you just went charging in as you are killed in seconds, even with high health.

I suppose for me I enjoy clearing areas and then searching for a button or something else needed to open a door etc.
There was one castle map I really enjoyed....took forever to finish but was great adventure. Forgot it's name!
Lost in time was another great map I really enjoyed.

Pileyrei wrote:There was one castle map I really enjoyed....took forever to finish but was great adventure. Forgot it's name!

If it was not MH-Ziki(SB), try that also. I think it will match your desire.
"Multiple exclamation marks," he went on, shaking his head, "are a sure sign of a diseased mind." --Terry Pratchett
Top

Thanks Barbie, will check it out