Maps not designed for rushing to the end

Discussions about GameTypes
2 posts • Page 1 of 1

Maps not designed for rushing to the end

Something that gets complained about a lot in many forums are MonsterHunt games online where some of the players don't appear to be interested in killing all the monsters. For whatever reason, they seem to be in a rush to get to the exit and killing only the fewest number of monsters possible to do this.

One of those isn't so likely...

While not the initial reason I got into editing maps, sometimes I do keep this in mind while working a project. Trying to make aspects of a map tricky for anyone trying to rush to the end. At least give the other players more time to try and kill everything else.

There's a popular map called MH-LostInTimeV2 where you fight through a Skaarj base, go through a portal, and wind up in a land filled with dinosaurs. To access the exit you gotta kill some dinos, activate some stones, and gain access to an ancient temple where there's another portal inside that is the exit... 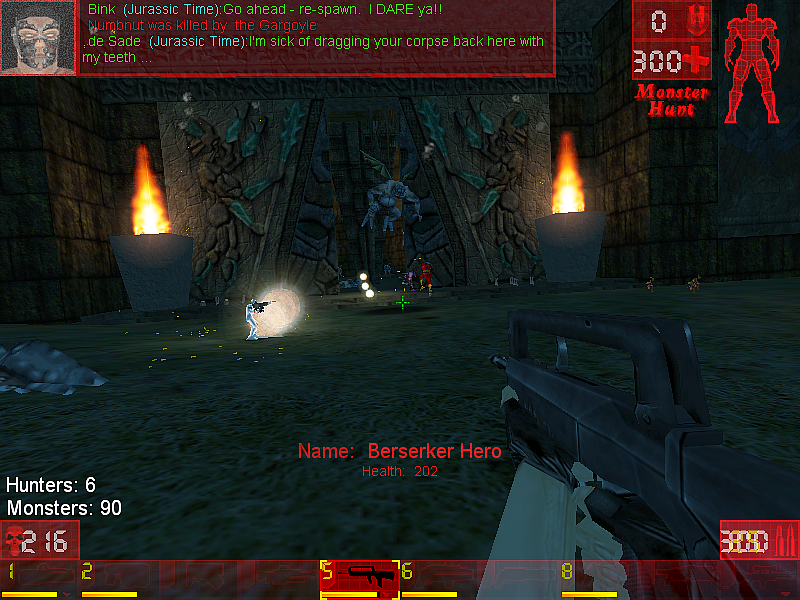 ...I swapped out some of the dinos on the map with truly hard to beat monsters, so even if someone did rush through the map, they'd really be in a fight once they got to the end.

Does anyone else know of maps that would slow down map-rushers?
http://unreal-games.livejournal.com/

Re: Maps not designed for rushing to the end

Another reason could be that some mappers treat MH like BT, given that many MH maps have BT elements.
And yet another reason could be for the challenge itself, to just really beat it as fast as possible. Each one has their own way of having fun: some play "normally", some rush, some cheat, etc.

Furthermore, in many coop games, the challenge is often to actually just clear the map, such as in No More Room in Hell for example: a free zombie game, one of the best actually, where you have limited resources (weapons, ammo, etc), and you and your teammates just have to go from point A to point B to be rescued, and you want to keep zombie fighting to a minimum due to low ammo, noise, and because melee fighting can be tricky without getting bitten.