Discussions about GameTypes
4 posts • Page 1 of 1

I normally play CTF4, but since I have both that and MultiTeamCTF I tend to play maps on both as there's some distinct differences.

Tend to play elimination-mode, which is different with them.
CTF4: Everytime you capture a flag, the team of the flag you captured loses a point. Lost as many points as the high score, your team is eliminated from the game.

MultiTeamCTF: Any team that reaches the high score is removed from the game. 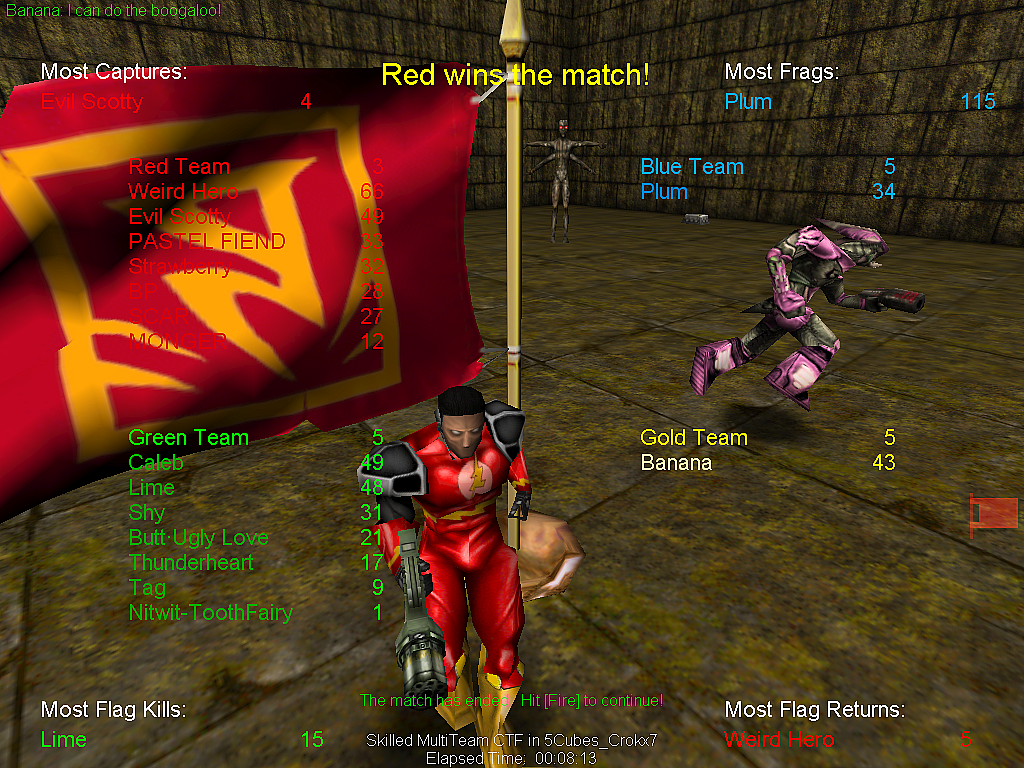 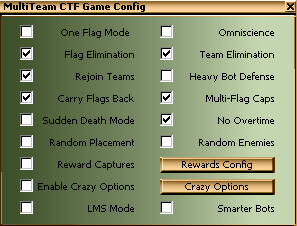 ...can't find anything that explains this.

Is it because Red Team got the most points, even though they got less flag captures?
http://unreal-games.livejournal.com/

Red won because they had LESS points - Green has 5 points which is the number for elimination and so they have been eliminated, leaving Red the winners (note that the Red Flag is the only active flag on the right).


MultTeam CTF Documentation wrote: The major difference between MultiCTF and other CTF mods is that having points is bad. Whenever you capture another team's flag, THEY get a point! The team with the lowest points at the end of the game wins!

- Score Limit - this is the point total that a team must reach before it has lost the game. If set to zero, the game will continue until the time limit is reached.

- Flag Elimination - A team that has reached the score limit will no longer have a flag! That team can no longer capture flags or be captured on.

- Team Elimination - A team that reaches the score limit is eliminated. The players can continue playing, but once they are killed they become spectators. Note that activating this will also activate Flag Elimination.

- Rejoin Teams - A team that reaches the score limit is eliminated. The players on that team, once killed, automatically join another team and continue playing. Note that activating this will also activate Team Elimination.

If you want a more normal CTF type match in MultiTeam CTF, don't set a Score Limit but just set a Time Limit.

It seems to me that you can win MultiTeam CTF by concentrating mainly on defence - don't lose your flag and let the other teams take each other's flags until two of them are eliminated. Then you might need only one or two captures to win.
Top

Now you come to mention it, I suppose it is (not that I know much about golf).

Here's the readme and help for MultiTeamCTF in case you don't have it
MultiCTF2Beta5_ZIP.zip
You do not have the required permissions to view the files attached to this post.
Top
4 posts • Page 1 of 1