taking a page from Serious Sam

Tutorials and discussions about Mapping - Introduce your own ones!
24 posts

papercoffee wrote:I have to correct myself ...it's impossible.

Not impossible, but it's tricky. I do so love a challenge!

papercoffee wrote:The first monsters have hit-boxes near the pelvis everything above is without hit registration (no matter which weapon mod you use).

What's that line from Star Trek VI: The Undiscovered Country? "Not everyone keeps their genitals in the same place, captain."

Similar to the Cyberus, the Eants were adapted from a nearly identical creature made for Legacy called an Ant. It's shorter, it's head is about where the pelvis is on the Eants, and it has a projectile (I've got them, by the way, just haven't used them for a map edit yet).

PeanutGun works great on the Eants, as does the Pepper Gun and that thing that fires the exploding tomatos. Salad-blaster (never can keep their names straight in my head) is good on them too.

papercoffee wrote:Food Fight with its reloading system is not fit for such a style of a map.

FF isn't the only weaponpack with such a reloading structure. I've also played this map with CounterStrike & Infiltration, though INF was easier as there's a keybind so I can reload anytime I want.

papercoffee wrote:But I died more because those weapons are somehow too weak in MH.

My initial line that FF wasn't really designed for fighting monsters, which got you so riled was based on that. Though I can't find where it was said, during the development phase it was pointed out FF hadn't really been setup for MonsterHunt. I even made a blurb I'd only found a few maps it worked really well on, like MH-LostInTime.

papercoffee wrote:Why not using those lights in the corner buildings as new teleporter ...when you killed all monsters activates the next one.

As I said, this is an edit of an existing map. I had thought those lights were teleports and was disappointed to find they weren't... until I realized what they actually are: bait. Where I've got bunnies the map originally had flies. That light is supposed to lead players into activate the flies so they can spawn in close to you and kill you... sort of like a reverse bug-zapper.
http://unreal-games.livejournal.com/

I may do 1 more edit of this map, specifically for =Food Fight=.

Just as there are some truly powerful monsters in UT, there's also a lot of them that aren't really that tough at all. So, for =FF= enthusiasts, I'll do up a version with monsters the projectile food can kill rather easily... 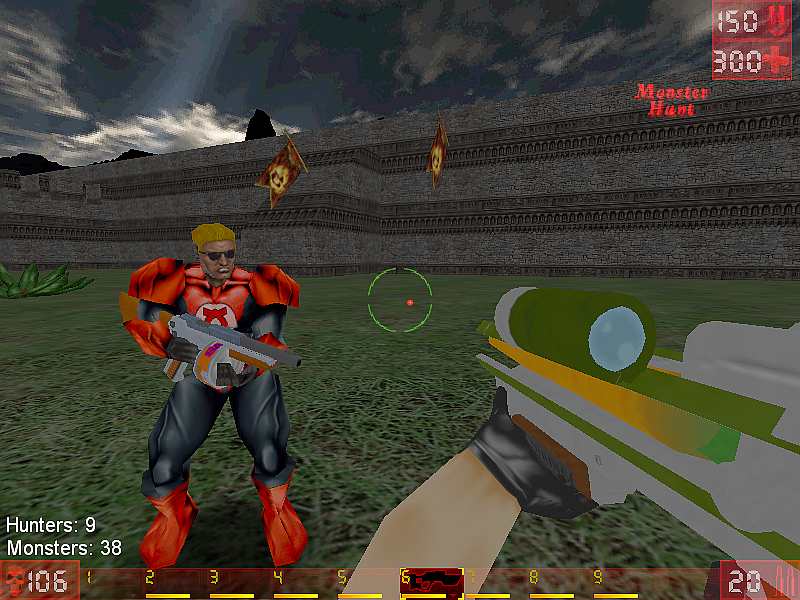 ...and just for safety's sake, I shall remove the terrifying bunnies and replace them with butterflies.

I'll leave the bosses as is, though. No need to make it too easy.
http://unreal-games.livejournal.com/

Lil' blurb I got from Fuzzy's forum (where on his servers he allows for double-jumping in MH) many of his players got up on the surrounding walls and bypassed fighting the monsters altogether.

Way the map works is you're only hit with 1 wave of monsters at a time. If you get past the existing wave before the next one comes into being... there's no monsters past whatever monsters you're currently fighting.

Debating a security edit, putting Warlord-Hunters on the upper-walls at corners for anyone that tries to rush to the end.
http://unreal-games.livejournal.com/

EvilGrins wrote:Debating a security edit, putting Warlord-Hunters on the upper-walls at corners for anyone that tries to rush to the end.

Some BlockAll, invisible Teleporters back to spawn area or death triggers should work also...^^
"Multiple exclamation marks," he went on, shaking his head, "are a sure sign of a diseased mind." --Terry Pratchett
Top

At some point I should learn how to make those, or submit the next draft by you to add such measures.

It's a long running complaint on a lot of MH servers, Fuzzy isn't alone on this, of certain players that try to rush to the exit... which takes away the enjoyment for many of the others.
http://unreal-games.livejournal.com/

Barriers... like huge walls (they reach the ceiling) which break down when all monsters in that area are killed.
And for the old people who can't run as much as the younglings, triggered teleporter.
-=: http://jokercologne.deviantart.com/ :=-

May make a couple more variants.

The XMAS monsters I got from Jack Griffin I already put on 1 map, but I'm gonna re-texture it with snow and XMAS decorations (if I can find them)... 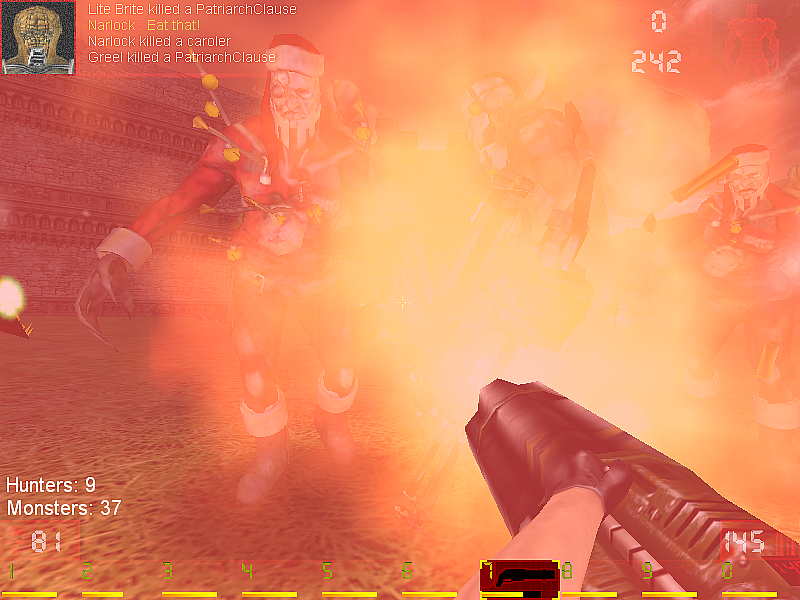 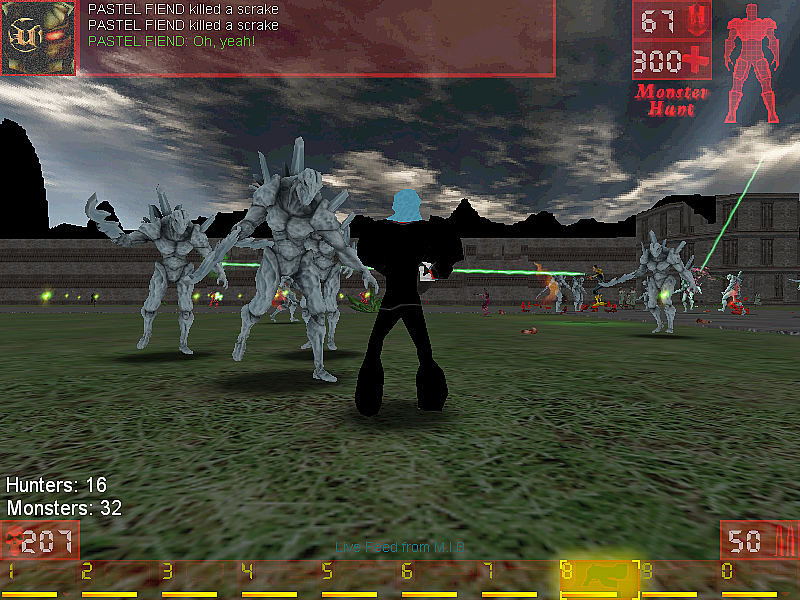 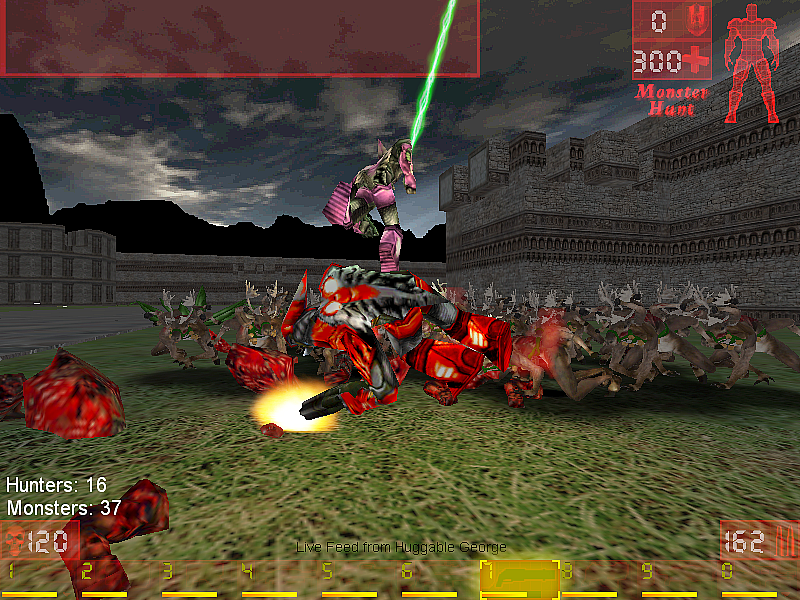 The Dark Forest map that kinda crashed with Doom & Quake monsters, plus Doom-weapons? 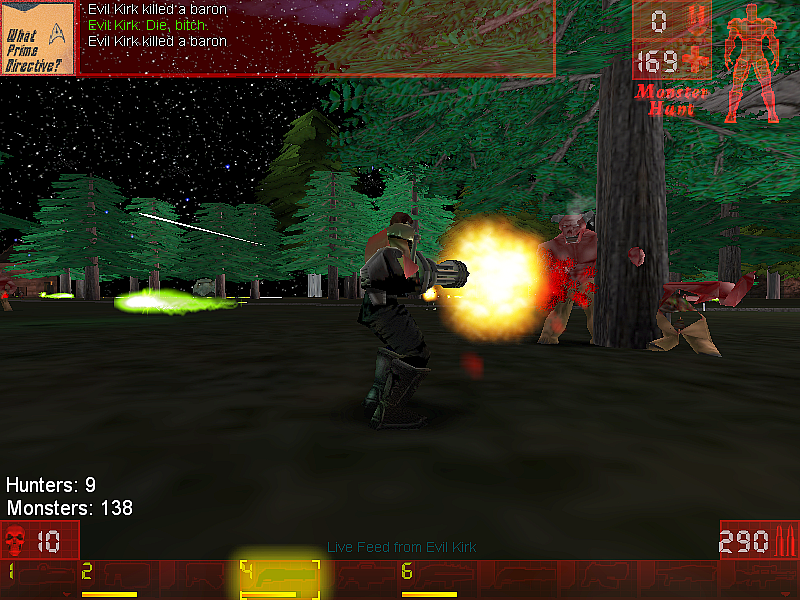 Gonna re-edit them to this map, plus I've got 2 sets of original Doom-textures that can make that visually more interesting.

Plus, where the evil bunnies pop out to kill... think I'll try this random thingy: 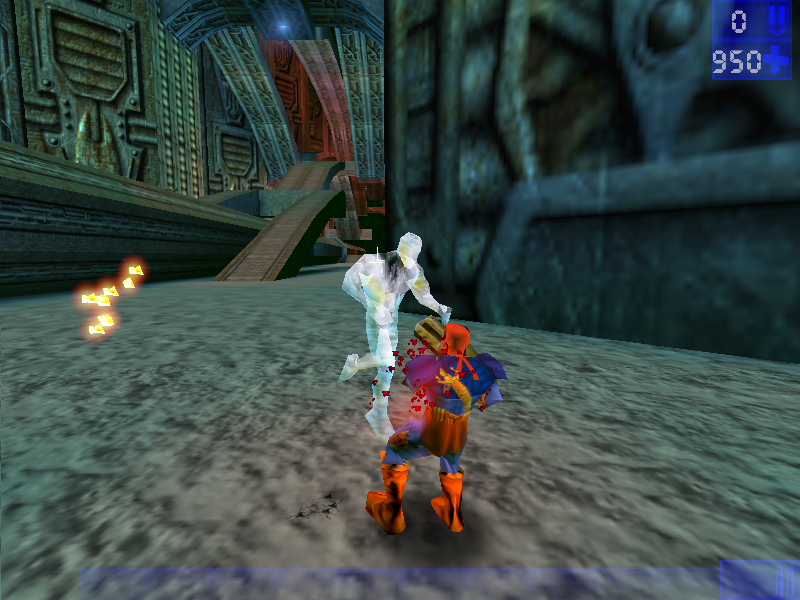 A ghost will fit in well with Doom/Quake monsters.
http://unreal-games.livejournal.com/

May've gone a little overboard giving my Santa Stormtroopers the Star Wars Rifle... harder getting used to that thing when a dozen Skaarj in Santa Suits are charging you with them.
You do not have the required permissions to view the files attached to this post.
http://unreal-games.livejournal.com/