Tutorials and discussions about Mapping - Introduce your own ones!
22 posts

I've got to finish up 2 edits requested by paper awhile ago (unemployed so I've got the time now) but to get back to that I decided to edit something simple first... 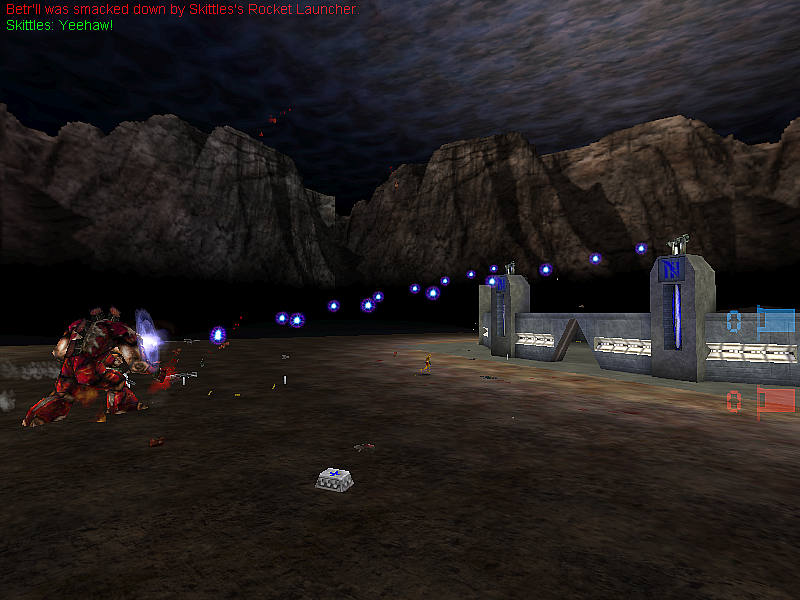 ...at least I thought it was simple.

Basic setup: 2 bases with a small mountain between them. Mountain has 3 tunnels, 1 of which has an obstruction I can't figure out how to get rid of. One is a LavaGiant-type castle, other is a bit more futuristic.

Primitive castle (Red Base) didn't have cannons defending it, so I gave it a UTDMT.

What I need help with:
1) If you're on the Red Side, the tunnel on the left has an invisible barrier that I can't figure out how to delete in UnrealEd.
2) Same issue SilverSound had, Blue Base cannons even kill players on the Blue Team; bots often shoot back at their own cannons.
3) Not a big deal but occasionally the UTDMT (Red Cannon) crosses over to Blue Side and the Blue Cannons don't hurt it for some reason.

I think I can fix it for you. Give me some time tho. :\
UNREAL
Top

EvilGrins wrote:1) If you're on the Red Side, the tunnel on the left has an invisible barrier that I can't figure out how to delete in UnrealEd.

For the other 2 issues I'd recommend setting LevelInfo.DefaultGameType to "Class'Botpack.CTFGame'". Does that help?
"Multiple exclamation marks," he went on, shaking his head, "are a sure sign of a diseased mind." --Terry Pratchett
Top

For other 2 issues just check console log about what does monster and cannon to CTF game... Good luck with fixing !
Top

makemeunreal wrote:I think I can fix it for you. Give me some time tho. :\

I have nothing if not time.

Might but I can't find what Class'Botpack.CTFGame'" is under.
http://unreal-games.livejournal.com/

See if this is enough soft with BSP - the rest of CTF crap is not my problem and neither U UTX the same UTDMT type file copied with another extension.


Edit: I was almost to forget. I must quote a few MH moments from my parties. I want to mention that I did not see many Titans/StoneTitans taking damage from shock-balls and... those canons are firing exactly these types of projectiles which I splashed with ShockRifle before telefraging them. I had to pay attention at geometry and they did not listen to me when I asked them politely to leave me alone, so I killed them. Then I could figure that tunnel + Editor checking. To be honest I don't ever map subtracting from an already subtracted brush and adding a solid through other solid directly. Epic were doing such things and results are known already - this isn't a "How To".

[attachment=0]CTF-SandFT1_1.zip[/attachment]
This is veeery aligned at grid...

.
You do not have the required permissions to view the files attached to this post.
Top

Hmmmm, with that tunnel fixed I seem to be getting killed more often now. Maybe best to un-fix it?

Didn't notice anything with the cannons killing anyone on the blue team so far: 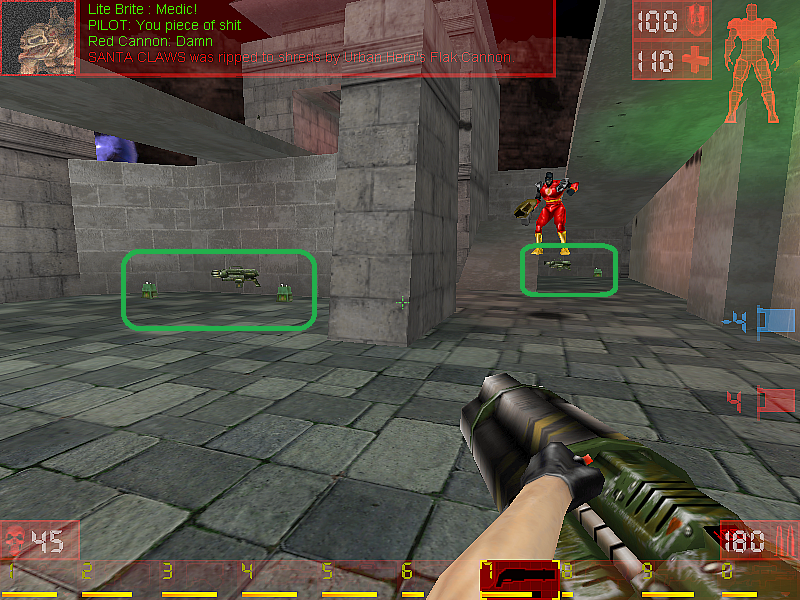 Don't need to 2 pulse rifles in the base. I'm gonna swap 1 out for a Flak Cannon.
http://unreal-games.livejournal.com/

Cannon is just Cannon... Bot might be getting mad randomly, attacking even other pawns when it gets company to Flag Carrier, of course it's taking a sh!t into console, no worries, because CTF is on purpose for 2 teams of players busy with Flags not with Pupaes or Flies or other useless CTF things, some good CTF modifications are removing all NON-Player pawns because these are trouble makers, and it's the last thing which an admin wants, to see server stuck by craps.

If you need a small "fallback" you can add some blocking buggers here and there using direct sample from "Factory" - BlockAll to bug a bit things not entirely.

Aside:
I was currently busy to check how is a CTF-Face building on a flat platform, 2 Bases copy of RED Base and "uni-Brushed" and... semisolid ones. Amazingly they didn't include any of known bugs... just saying. It's where I tested/fixed a "saber" crap which was an utter trash.
Top

ah crap!!! That map. You just reminded me to fix it up. I can't remember if I did as of now. Sorry for not keeping up with that. I wasn't (and still am not) really finished with that map.

I think I might have posted that for some feedback. Knowing this you can tell why there are some obvious issues. Makes me happy to see you playing one of my maps though!


Kinda embarrassed of the brush issue

Yeah turrets are wonky in CTF. I need to figure out how to fix those logs. If I knew what to override I would in a game-type for it. Just got to figure it out a bit.
"Woah what?! I wish I was recording that...."
Top

Can someone give me a bit of a rundown of the issues on that CTF map? I am fixing that brush but someone mentioned a HOM that I somehow didn't notice.


The map was supposed to be a bit of a "Showcase" for the turrets. Haha. I thought it would be bad if I didn't just finish it. Have plans for it but I want to address the big issues before I go further.

BTW CTF-SandF is not it's final name and was it's development name.


Edit: HA Found it. I'm so surprised I didn't notice this before. Redbase was more or less a bit of a placeholder.

Easy fix is to just...re-make the brush. I think it's a semi-solid?

.
If Editor has option to evade from grid it's because you need to have these at FIXING MAPS not at Building Maps. When some rebel brush has pivot screwed up disabling alignment temporary might be very helpful before aligning command and activating alignment again.
Top

.
If Editor has option to evade from grid it's because you need to have these at FIXING MAPS not at Building Maps. When some rebel brush has pivot screwed up disabling alignment temporary might be very helpful before aligning command and activating alignment again.

I've tried my best to make sure things are on grid. 227j added a new tool to snap verts of a brush to grid so I can just go around and do that to all the brushes that are off grid. Like the entrance to the blue base....the tunnel is just barley off grid.

I've fixed the mentioned issues. Shock ball confused me though.
"Woah what?! I wish I was recording that...."
Top

And even in UT's Editor I have buttons for aligning without saving in map bits of 227 which UT doesn't have. Buttons are easy to do. The most interesting thing which I found (others might been knowing it for months-years) is that you can copy any brush to red builder, then you can deintersect/intersect properly the bad configured brush and... happily having separate brushes in an improved better build, doesn't matter which Editor are you using.
Top

SilverSound wrote:Can someone give me a bit of a rundown of the issues on that CTF map? I am fixing that brush but someone mentioned a HOM that I somehow didn't notice.

-Issue with the tunnel was already corrected.
-Switched weapons, so no repeaters in same base.


Only remaining issue was the cannons (which you were demonstrating) target people in their own base.

UTDMT is undefeatable. Cannons don't kill it and it doesn't seem to recognize them as a threat.

If the cannons weren't so cool I might opt to remove them and just put a blue UTDMT on the other side. Even though they'd have access to the whole map, at least it'd be fair.
Last edited by EvilGrins on Thu Aug 24, 2017 9:34 am, edited 1 time in total.
http://unreal-games.livejournal.com/

Instead of a Team-cannon, what about a Tentacle ...can this monster be assigned* to a team? Like the Team-Titan.

*and with assigned I mean coded.
-=: http://jokercologne.deviantart.com/ :=-