Do you ever feel like reworking your old stuff?

Tutorials and discussions about Mapping - Introduce your own ones!
Post Reply
11 posts • Page 1 of 1

Do you ever feel like reworking your old stuff?

sorry, Ive been under the living dead for quite some time, but I am really interested on your opinions on how you feel about your past creations that may have been done 2 or 7 or even 15 years ago. Do you ever feel like, after having improved so much over time, to rebuild something that you were proud of in the past, but you came to be embarrased of it today?

Maybe it is a different situation if you build standalone MP maps that have nothing in common with each other as opposed to a SP campaign that builds upon each other (as in my case), but I have been thinking a lot about my past stuff and the criticism that I got in 2009 became so apparent to me later on: The brushwork was kind of random. That was because I thought the 2D shape editor was like the Holy Grail and I only used basic brushes if really necessary. Plus, I never reused older assets - with a few exceptions - so that every room looked completely different. The only coherent theme was the use of the same texture package. And although there was this "random" brushwork, the technique to build the rooms was restricted. So, over the many years that followed I decided to use more basic brushes again and incorporate more vertex editing, but still implement some crazy design ideas, though well-dosed.

However, when I compare the first and the second half of the project with each other, it results in such a design clash that I want to change some older areas to match the later style. Below you can see a small example of what I did to an (2008) area in Unforchers, that I was completely unsatisfied with in 2017, and what I did to change that, while maintaining the shape and the layout of the room.

So... what is your take on older releases? Did you ever think such extensive reworkings are worth it? 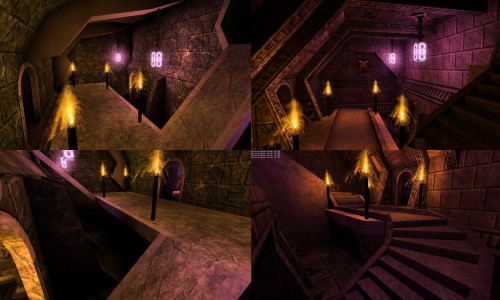 When it's a single project, it's nice to rework old parts to fit with the new ones. Otherwise, I think it's good to know when to say "stop, this is over for this one" and move on to something else. After a while, the flaws of older maps become endearing to you as it acts as a documentary on how your style and skill evolved.
You must construct additional pylons.
Top

I agree with you on the documentary and the unity of a project cases which is why I probably dont feel the need to revise my very first released (independent) project which looked like your typical noobies paradise (though it kinda played like my later SP stuff). However, I wonder... given the polycount is similar, would the average player even notice the different approaches to design? Maybe the differences dont seem to be that huge in my example; I have ideas for more fundamental revisions in other areas, So I guess I will return to this thread when I am finsihed with those, if no one else has got an opinion on the matter.

I like your reworking of this shown area. It certainly feels more real or better plausible to have stairs instead of ramps there.
My urge to rework former maps was much higher in the past ...but right now not so much.
I have two new maps in the pipeline but can't get my enthusiasm up to work on them let alone reworking old ones.

editor Dave wrote:how you feel about your past creations that may have been done 2 or 7 or even 15 years ago. Do you ever feel like, after having improved so much over time, to rebuild something that you were proud of in the past, but you came to be embarrased of it today?

I am definitely familiar with the concept
Show 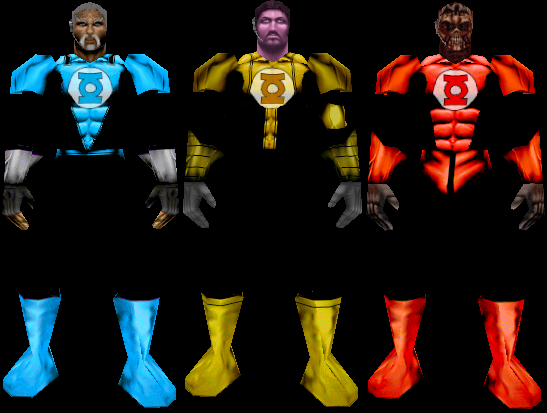 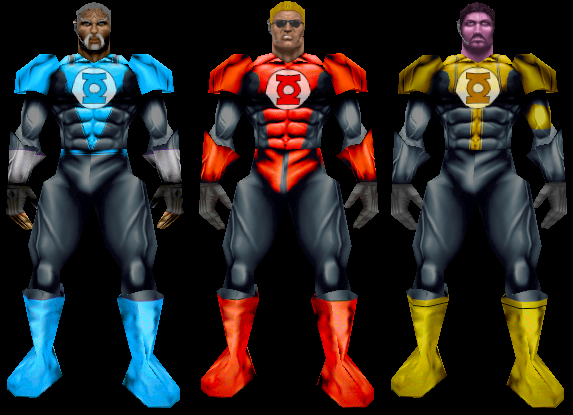 @evilgrins: Those re-edits look much better, nicely done! If anyone else has comparisons of their work in store, Id be very interested in seeing them.

@papercoffee: Thanks, Im glad that you think the changes were worth it. As for your future projects, watch this...

Takes me like a year (or 5) to make a dang map, so the only reason for me to go back would be logistic gameplay reworking.
Binary Space Partitioning
Top

That is me lol, I have gigabytes of stuff I never completed. When you like to do a lot of things, you tend to never complete any of them.
"Your stuff is known to be buggy and unfinished/not properly tested"
Top

I've reworked two maps for the last year content i had created 15 years ago. 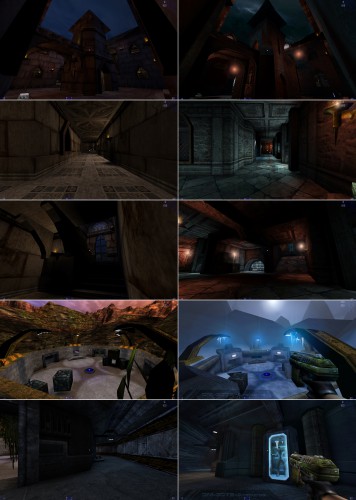 Thanks, Tyr, those comparisons are very interesting! Arcturus now looks way more stylish with the icy feel and the "cold" colors. What I can see is that besides more detail you put higher care in lighting and, especially in the ancient map, you made the textures do more work than before. This is what essentially happened to my recent reworkings too: Not long ago I learned to skew textures, a feature I thought upon reading I wouldnt need often, but I now I do it all the time

When I look at the 2009 version of my map, back then I knew I needed more than one light actor to make engaging lighting, but I almost had never done so, because I seemed to be satisfied with the results. Nowadays, well, you will notice the difference!

I replaced all those "random" supports and decided to let the textures do the trick. The sides have been made curved and actually, the only thing left is the structure on the floor (but aligned with similar structures in places near that area) and the left hand prison cells. I also needed a better contrast in lighting.

Here I merged two hallways in one. You see, the one with the stairs was just super cramped and looked awkwardly (aside from the stairs themselves) and I needed more space in general. I decided to leave out the carpet so they look similar to stairs from the area of the very first post in this thread, thus adding some coherency.

I think lighting IS the end all, since everything comes through a flat 2d screen the only thing that makes it 3d is the lighting.

Even with just bare gray walls.

I put the zone light to 1 maybe 2. I never like maps that blast a light at you with pitch black next to it. I call the zone light the black level, too dark you don't see the structure, to bright it all washes out to one brightness.
Binary Space Partitioning
Top
Post Reply
11 posts • Page 1 of 1