There's an option for "tools" but it won't let me give it a weapon.

What's an acceptable tool I can give it?

by sektor2111
You can give it a hammer, a fork, a spoon, anything like a Weapon which you want - it's just useless.
This class is unfinished as that bActorShadows (not Pawn.Shadow) and that LensFlare and the rest of unfinished things.
But I can try to arm this pawn in some Level, I wanna see what will do, probably nothing just chickening out.

sektor2111 wrote:But I can try to arm this pawn in some Level, I wanna see what will do, probably nothing just chickening out.

That's okay. There's a combat version of the Nali I have, though never tested.

I was just curious what this option might mean.

Whenever I tried to give it a weapon, it opened up a section of pawn properties I'd never seen before. May poke around in there some more.

by Red_Fist
I think it is to create an event as the Nali picks up or is told to use, then in SP maps it's looks like they are doing something for the storyline.

Don't know if it works, only messed with it once before. I don't think it works like Sektor says, it wasn't finished or something.

by Barbie
I played around with that but couldn't get it working...

Because that "tool" is defined as class Weapon:

I tried spawning a weapon and giving it to the Nali:
Spoiler
Show

but that did not work (the weapon just moves with the Nali): 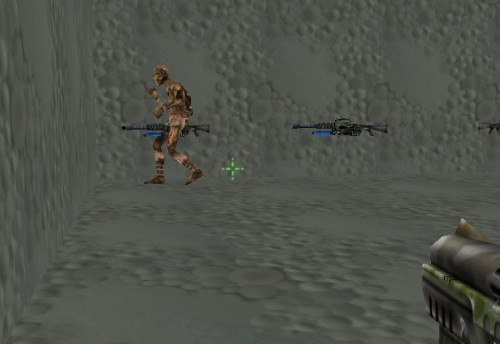 While looking at the Nali's stock code I found such:

The mesh of a Nali has the animation 'WalkTool' (having that tool on the shoulder and keeping it with one hand, see above pic), but it is played if the WEAPON is set, not the TOOL. Maybe the Epic coders messed that up...

by sektor2111
Not maybe, they have done nothing to arm this pawn - actually the code for loading weapon doesn't even exist - animation is used by any of those NaliPlayer types using that mesh... and probably Pawn.Weapon is also conflicting with Nali.tool(weapon as well) like that AttachTag crapped thing and/or the duplicated TriggerLight + the rest of trash.

by UTNerd24
Not sure if i've gotten the right end of this conversation, but if its a Nali with weapons you're looking for, there's a ScriptedPawn class in Nali Chronicles that is capable of holding weapons, does not shut you out from friendly fire and is more than capable of killing small enemy groups.

Alternatively there is a special class of Nali in Return to NaPali: Ultimate Edition that can conjure spells such as fireballs and orbs of light.

by sektor2111
EG was asking about Nali class from UT not other "adds" coming from community. Yeah, read again, for Nali mapped in a Level, by using that "tool" nothing like a magic will happen, no worries.

by makemeunreal
Here's a Nali usin' a pickaxe.

And another doin' the same.

by sektor2111
Pointless, that's not a Nali from UT because those images are not from UT. except confusing noobs I don't see what's the deal. My daughter has a toy looking as a smartphone but is not a smartphone

by makemeunreal
True.
Just wanted to show him an example of a Nali usin' a tool.