Tutorials and discussions about Mapping - Introduce your own ones!
Post Reply
106 posts

That's an old map, played it many times for sure but only in the sniper arena type.

That risk calculation is also interesting.

Points:
- A mutator screwing Bot's hunting state ? Good luck here... make them more idiots as possible;
- A mutator stopping Bot to jump even if target is in Water ? MH-AnewHope - consider cracked version in run-time;
- A mutator just because sniper maps are TALL ? Why Tall ? Who made this rule ? And light me about this logic. Like I said, such maps are incompatible with Bots, with default Engine parameters, with fast rendering, with...;
- Do you want blockers to make them more retarded ? Not my way.

My proposal here would be a "SniperActor" in MyLevel turning them into snipers even if in reality they cannot see you well - Invisibility discarded from being in account...
Anything else ?
Top

Known problems: bots don't attack, some of the elevators are too close to the floor and have their fence texture flickering + their sounds are set not correctly.

Thank you for this, can't try it out until Saturday though.

Also, if you want I can update the list on the 1st post, think there are a few more released that aren't in there.

Only if done through this thread.

With regard to first post and whatever Work In Progress thread... I think things are going more complex as follows:
Known or less known map MH-GardenOfDeath after inspecting/tweaking it and adding Large XC paths, XC_Engine v24 and XC_MonsterHunt are capable to develop some Bot Support together: 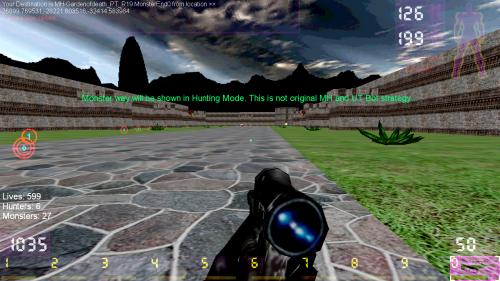 In above image MHBotyman5 (WIP as well) shows the way to MonsterEnd VIA RouteCache points. Strategy is based on default hunting Acceleration which Bot will have in XC_MonsterHunt and newer DevPath.
This kind of images are Not Possible in default UT with plain MonsterHunt and that's why I used word "some" as long as it's not usable in all conditions. It doesn't have XC_Engine repositories in dependencies and neither other assets than original map, but it's different as paths construction. And then... over-sized maps used in plain UT won't work anyway so we cannot claim any Bot Support, but XCGE will demonstrate something different...
Different said, we do have BotSupport and... No Bot Support (for XC_Engine haters

).
What kind of category is such a map and in which conditions should be shared - for those XC users ?
It won't crash plain UT but it won't work as it is capable to work. "Maps-Modifiers" using plain Editor will completely ruin such map because it has a different paths building method... including aerial paths which plain UT Editor will never do...
As a few Tech Notes, here it is used a SkaarjBerserker as reference pawn for mapping paths, two reachSpecs were removed around start area (just for fun).

Perhaps for preventing confusions and more hate from XC haters, I think such a map will be used without too many public links.
Top

sektor2111 wrote: ↑
Sun Sep 08, 2019 11:41 am
With regard to first post and whatever Work In Progress thread... I think things are going more complex as follows:
Known or less known map MH-GardenOfDeath after inspecting/tweaking it and adding Large XC paths, XC_Engine v24 and XC_MonsterHunt are capable to develop some Bot Support together:
XC24MHBt5.png

You did an amazing job pathing that.
http://unreal-games.livejournal.com/

That R16 was an older "trigger-type" version. If a mapper is taking a look at it and checking devs will be surprised to see that it doesn't work with default Navigation, it's a full brute-force over there, that's why Bot is moving. Right now I have recreated normal paths in another EDIT and results are 0 (Zero) out of XCGE24.
But... because XCGE it's my default install, I'll keep that "insane" version addressing XCGE users... In above image, MHBotyMan is proving that newer Edit it's working without any single problem boosted by XCGE.

Just a game note: Map goes easy when "secret" is known/taken - that's a no skill thing. When Shrimp attempted a removal of InstaGib from MonsterHunt that was a logic and a good decision... Perhaps a plugin will manage that by destroying it at random - insta ON, insta OFF - depending on weather, lol.
I don't know if Higor removed seeking limitations or not from Engine but... I can see a higher capability toward those spamming lines returning "1000 paths searched from X" and making pawn retarded.
Top

Has some basic pathing, enough for bots to get out of the cave and to the first castle, but then they just run back and forth from there back to the cave.
http://unreal-games.livejournal.com/

If is about that oversized map, devs won't work - I have to figure if XCGE is helpful but... if player doesn't use it... results are irrelevant.
Maps based on a constant movement forward are supporting triggering, those which needs multiple directions and having a complex geometry might be very difficult to manage using Brute Force.

Another interesting case was MH-PurpleChristmas map. Devs were operational for a half of map loaded with paths. When map was full filled with paths, devs have stopped working, Bots being no longer interested in attack.
Top

MH-SkaarjCastle2012 absolutely requires XC_Engine, and I'm not sure how well bots can operate the long lift taking them into the castle in the center.
Did a few playtests and there's a lot of things to solve.

In the past, like 10 years ago, I was both editing and I created a harmony of 6 bots together.
But the structure was so bad that I had not released the files on the internet and the files was forgotten in time.
I also had a server from ut99 and I just want to show people who I was online, I was capable of that.
I was not so good at photoshop. It was the first time that I made an edit in the unrealed 2.0 that was a disaster at that time.
It was just an ugly texture.very ugly.
But the bothpathing was good and they walk that way i dit programmed.
unreal tournament 99
®

Higor wrote: ↑
Thu Sep 12, 2019 5:24 pm
MH-SkaarjCastle2012 absolutely requires XC_Engine, and I'm not sure how well bots can operate the long lift taking them into the castle in the center.

Is the lift the only way up there?

If I've got bots following me, and there's another way up, they might opt for path #2 to reach me.

...think it's a cool map but I've never gotten very far on it, so I don't know where things go.