PrinceOfFunky wrote: I noticed you've made a t3d exporter for Blender and it works fine, I must have missed when you talked about it D: .

Gustavo6046 wrote:Thank you! But I think the source code for that is very messy. I have to rewrite it anyday

That would be nice if: If multiple objects are selected a level t3d would be generated instead of a brush t3d, you can use "bpy.context.selected_objects" to iterate through all the selected objects.
Another thing that would be awesome, is to allow actors and movers, for example:
- To specify that some object must be interpreted as an actor, check if there's a custom property like "Actor: True", and if so, get its custom actor properties like "actor_LightRadius: 90", remove the prefix "actor_" and add it in the t3d as "LightRadius=90".
- To specify that some object must be interpreted as a mover, check if there's the custom property "Actor: True" and check if the value for the property "Class" is a class ending with "Mover", then get its 8 keyframes and use them as mover t3d keyframes.

PrinceOfFunky wrote:
Spoiler
Show
p.s. You can't define something as that something itself ("A game is a game ...")

Huh? What do you mean?

@PrinceOfFunky, what I meant with "game is a game IF..." is that those are the conditions for something to be a game.
Top

PrinceOfFunky wrote:I knew of a 3d modeling software that had as a demo model DM-Barricade with the name "barricade", but I don't remember the name rn, I think the interface had 4 viewports as default.

DeleD 3D Editor! It has an example (dxs) file called "Barricade" which is indeed the DM-Barricade map from UT99. 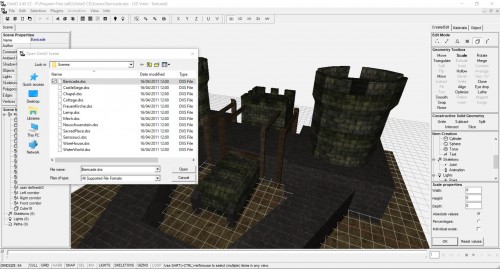 EDIT: Also, this file called CastleSiege is one of the bases from CTF-LavaGiant: 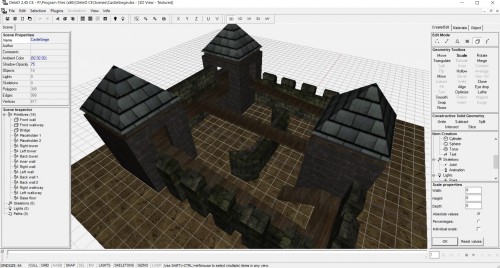 EDIT: For the record, the skin change thing was used in version "88" from November 1997 which had skaarj dressed as nazi..err no jokes, it had instead a "burned" skin that would get applied realtime each time smeone got burned by a lava or gasbag, incinerated damage death, we released the crispy skin mod with codex to this effect also.
It used the original "burnt.pcx", also this was obviously from a time when napalmgun was still present.
But in plain Unreal afaik they never implemented this. The old vigil zombies and u4e zombies also use texture change to make it appear like they are missing a leg etc when it's simply a masked trick applied realtime.

The chaosUT sword is a good example indeed as said by Jack. It's also being extensively used in Klingon Honor Guard, the first UEngine game that actually made it alive into the market aside from original Unreal.
It's also possible one of the early 1998 versions had damaged player skins hence the "male1gib etc" stuff, applied realtime but it got dropped. One of the mods I was developing but abandoned with a guy called DamianX was called BloodyBody and he provided set of skins for male2 that were used as overlay, however I couldn't convincingly retain it on corpses and maintain compatibility as he insisted it would be an overlay like the shieldbelteffect..
Original post below:

When is this editor from? Also what's the deal about that standalone 2.1 editor? I saw it in that nali thread, definitely used outside of 227i.

Also a bit unrelated, but here is a bit about unreal models, not brushes.

I know some engine licensees used autocad etc, but there was really not just a single way someone did something afaik.

>-We need to know the process of bringing in Pawns (that is, monsters) from a
>3D modeler (we're using 3DS Max), incorporating them into the Editor and
>texturing them. We need as much a nuts and bolts/step-by-step answer as
>possible, including detail like polygon count maxiumums, file formats, etc.
>We also need to know how they need to be built/optimized.
>
>I suspect this is a tall order

You'll have to talk to James at Digital Extremes, as far as importing and
texturing is concerned.

Polygon counts: We currently have nothing over 650 polys. This would most
likely be a "boss" type creature, placed in a very plain room. Most creatures
are averaging from 200-450 polys.

File Format: Currently we're using DXF out from 3DS r.4. I don't know if there
is any variance with DXF from 3DS Max. The export requires a single DXF for
each and every frame of animation.

Build & Optimize: Most of the creatures are a single seamless mesh. I'm using
Bones Pro, from Digimation, to perform the skeletal deformations. Optimization
is performed at the vertex & face level, using conventional modeling techniques.

Common sense - Be sure all face normals are "correct". 2-sided faces slow down
rendering. Use a slightly higher level of mesh density around the joints, to
facilitate bending. [*Note* There is a "snap" tolerance in the Unreal animation
engine. I believe it is set to .3 units. Try not to allow separate vertices to
pass within that distance of one another. If they do, they may become locked
together. James is the expert on this one.]

LMK if I can be of further assistance.

PrinceOfFunky wrote:DeleD 3D Editor! It has an example (dxs) file called "Barricade" which is indeed the DM-Barricade map from UT99.

I noticed these things while inspecting the two versions of barricade:

I'm not sure if "Dav" is Dave Ewing from UT99 or Dave Granada from DeleD 3D, also who is Alan?
The DeleD 3D version of barricade really look like a beta of the UT99 final version.
I can't see any T3D importer/exporter tho.

Dave in my post refered to Dave Carter, as he sometimes called himself Dave instead of David, and this could all be a coincidence, I think you're jumping to conclusions, never heard of the Grenada guy being involved with Unreal or UT but I can be wrong and he had something to do with textures.

Dave Ewing was making sound back then, not levels although later he moved onto level design.

Alan? I didn't mention Alan, however there was Alan Willard of course, he joined Epic right after the release of Unreal and his first level was Scruular, released on the ocassion as bonus level with the strategy guide, then dm cybrosis of course as part of fusion pack and unreal 223 release.
Top

I know it would take a good while but you should put all your historical knowledge into story form and post it. No one knows anywhere near as much as you.
So long, and thanks for all the fish
Top

It's nearly impossible to do that. It's not one single story. I might bring it up each time a topic is right for something, but I can't possibly put it all into a single story. I did post something slightly humorous but still historical at the offtopic before (what could have been).

People can respond or ask questions there. Why did I put it to offtopic? Well, I'm not sure where else honestly.
Top

Can someone still answer the question about the standalone 2.1? Where did that came from?

Also an attachment a readme for that ms dos texture mapping program which schmalz only gave the emissary team later. That program was actually based on the very original Unreal that was being developed for MS DOS. Before the switch to win nt and greater tim sweeney's involvement, him taking over the engine duties from schmalz.

This comes with instructions.

Extension txt not allowed? Well, here comes in the post then:

The 256x256 textures are stored in pcx files Texture1.pcx to texture9.pcx.
The pallette is taken from texture9.pcx

edit the data.txt file and modify the 2nd and 3rd characters of the
file to select the number of the mesh you wish to texture map.

use arrow keys and A and Z to move the mesh on the screen. Use the
mouse and click on the rotate buttons and the x,y,z buttons to modify
the rotation. Rotation method is same as used in 3d studio format.
THat is a vector x,y,x with a rotation about that vector. This
method takes a bit of getting used to, but it works fine.

right click on a triangle on the mesh and keep clicking until the
triangle you wish is flashing. Then use the texture buttons to
select the appropriate texture you wish to use. Notice that the
flashing polygon has 3 different colored verticies. By right
clicking anywhere but on the mesh will change the cursor color, these
colors match the 3 corners of the flashing polygon. Left click on
the texture to select the vertex coordinates of vertex which has the
same color as the cursor. Right click to select the next vertex and

left click to position it. Right click once again and select a
position once again to finish the texturing of that vertex.

Select a new polygon and repeat.

Click on the type button to change the type of polygons, textured,
flat, gouraud or translucent. Translucent will be used as two sided
within unreal and not translucent.

Click the Save button to update the dataXX.3d file.

If animations exist, you can cycle through them with the animation buttons.

You can press 'W' to turn off the background texture.

left click in the bottom right corner of the screen to shift the
background texture up and down.

These are all of the major features

Leo(T.C.K.) wrote:Can someone still answer the question about the standalone 2.1? Where did that came from?

As far as I know was/is it a fan made standalone version with added extra functions like the extruder Brush.
It was certainly not an Epic product.
-=: http://jokercologne.deviantart.com/ :=-

OK but where can I find it?
Top

The readme says http://hofgamingclan.com/ though you now need to put https in front, not http. If no success there, you could try this.
Last edited by OjitroC on Sun Apr 14, 2019 8:56 pm, edited 1 time in total.
Top

Otherwise I'll give it a pass for now, but thanks. It says it's from 2012, so it might not have all the features I've come to expect.
Top

Leo(T.C.K.) wrote:I'm wary of random setup programs unless they are self extracting archives or unless I used them in the past. Is this self extracting?

You're right to be wary - I certainly am. I've had it for a long time now (mine came from HoF when they had a download section on their site) and so honestly can't remember what the setup program does. I should say that I didn't have any problems with that (nothing malicious).