can't find package BBoyShar.
I want to playtest this map.

Then can you explain this? 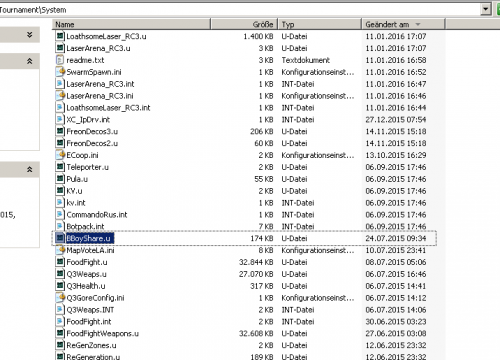 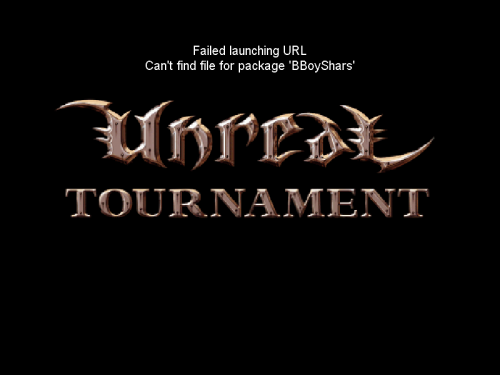 papercoffee wrote: Then can you explain this?

No, I can't - all I can say is that I've tried it with each of the BBoyShar_ variants and without any of them and the map has loaded OK on my system. Are you playing the AMC version or the AWC version?

by papercoffee
oh there is also an AMC version?
I downloaded it from here. And it was the AWC

Yes, that's the latest, broken version - it's the one that is now in Terraniux's thread in the first post, I think. The AWC is the earlier version (which does require BBoyShars.u).

If you run the AMC version, don't forget to change the CloudZone to a VacuumZone before you play it.

Yes, that's the latest, broken version - it's the one that is now in Terraniux's thread in the first post, I think. The AWC is the earlier version (which does require BBoyShars.u).

by FraGnBraG
fwiw i was playing testing the AWC version ... I just never realised it did not say "AMC" ....

maybe that's why my version was working?

Yes, that version runs fine, no hangs or crashes. It lacks the CloudZone and doesn't have a lot of the music stuff nor, indeed, as many monsters as the AMC version does.

by sektor2111
Nope, indeed it will be CloudZone not VacuumZone... Else thanks Oijtroc for PM, I'm setting up full Bot Support and buggers out. Diamond supposed to rotate but being a bStatic actor will be mobilized into an alias a bit shiny, paths in gravity zone will get linked, I'm going to track if exist another call to something rammed, all BBoy collection has been deleted. Yes, coronas from base had the same rammed group but I quickly fixed problem according to recommended coronas from CM4...
Paths will except PlayerStarts from Navigation but they are still part of NavigationPointslist for a proper deal with game controllers, they are about be blind without navigation data - I found a solution to convince all DevPaths (XC and non XC types) to leave me alone as I want. Here I went to develop a feature in builder (a very simple trick lol ) which I will release if you people want it... and later when map will be ready and if you want that as well, I'll share it for showing you what I think when I'm speaking about this map, not before testing it privately ON-Line... I want to see all net stuff working properly.

Decorations: Some trees have been "re-prepivot-ed" properly - And... would be good to have builder able to round those 63.988762 collision craps because these floating numbers are way useless, we can have rounded numbers with no issues.

Of course, all credits goes to Terraniux for this testing environment.

But Nelsona, the ued elder god adviced me to swap them.....

Im very relieved we got it.

But can the situation be altered? not using either actors or something else? like a kill - all zone?

--
Sorry for the confusion guys with the package. It was always AWC, then later on I discoverd it should be AMC. for almost 3 months I red: amc....

My disk is the problem. I stopped working earlier ago. I got confused with the package as well, which one was the lastest and previous.. one.
Ok, Bb actor is never to be used again by me! What a mess.


Give me the story in short what I should fix for the final mappack version.

Thanks guys, you have been a great help.

Beers are on me.

No, not me - Barbie and sektor2111 are the ones who have found the solution(s).

sektor2111 wrote: Nope, indeed it will be CloudZone not VacuumZone.

So you can get the CloudZone not to crash it?

by sektor2111
CloudZone is killing a pawn entered with any matter taking in account ENEMY - or a suicide if no enemy - I used it in all my MH craps with no single problem - problems are usually from wild packages. If you shoot at a Skaarj direction and moron is dodging over ledge, and definitely you being his ENEMY, his death will count as your kill - a sort of WhoPushedMe mutator in other format. CloudZone is NOT ADVISABLE at all in CTF games because NON pawns are destroyed there. If a CTF map has this thing should be fixed, or quickly patched else it will cause problems. Of course this can be rewritten for CTF in another format but it's OFF-TOPIC here.

The Map:
A previous version has less brushes, Last ones added in AWC were doing something affecting surfaces and messing decals, I will spy them another time, at this moment what is done works, an extra-examination is needed because I could see SpawnPoints lost in the wild not connected with any Factory but I solved them, and maybe I have to break these outta network like PlayerStarts...

. It's useless to have more data in paths array because these are not even needed and fly seekers are powerful anyway... they can find more targets than ground units.
Now I have to examine monsters and projectiles, even if I don't need that. Default MH servers should not go in troubles when projectiles with no net codes and no damage are used. Map has to be playable for everyone. I will spend a bit looking around for any trouble maker.

by OjitroC
I see but changing the CloudZone for a VacuumZone (in the AMC version) results in a stable map with no significant log errors - I've done that and played two games in it (each game about 70 minutes).

Comments on the map

by sektor2111
Cloud for me did not have problems so far and definitely monster should not escape there like in other maps being un-killable. If destruction and evil stuff comes from CloudZone then... I will set another type of deal... I see rare but still happening problems here and there... Okay, changing the death...
Perhaps here is a nasty load slowing down engine (I can see this in rendering) and then I expect some execution frames getting funky...

That "announcer" I wanna see where it's located...

Bars from ground teleporter have default Tag "Mover" - it looks like is not connected anywhere...

OjitroC wrote: 9 Not sure mixing Berserkers with other Skaarj Warrior types is a good idea as the former tend to kill the latter

Allow me to handle this, I've done some wrapping in maps where game started with 502 monsters and in 10 minutes of no battling, they were remaining 370+, the most of them attacking each-other (defalt MH). If I will solve game problems I promise some MonsterShadow On-Line for clients - this might be indeed an AWESOME map.

by OjitroC
In the last two games I've played things have not happened as they should although I found all the necessary objects and done all the right things: Also on the 'Warlord's island' the first and last step in the tower are too high to walk up and one has to jump on to them.

In the last game there were 7 monsters unaccounted for - perhaps there is an issue somewhere with spawning them or with a counter?

There is no ambient sound in the map which detracts slightly from the overall atmosphere.
All times are UTC+01:00
Page 6 of 9
Powered by phpBB® Forum Software © phpBB Limited
https://www.phpbb.com/