Started doing this map today, and it's actually meant to be a relatively simple map where I am getting my hands dirty with terrain.
And although the intent is to finish it by December 10 (AMC deadline), meaning that I intend to spend only a little over a week to finish it, and although I have a pretty good idea of where I am going with this, it's very likely that I won't make it (since I started it too late), and if that's the case, I will just finish it for the final pack instead.

As such, don't expect much from this one though, the terrain I made is not very complicated, but I expect to have all sorts of issues and challenges with this one: BSP, lighting, probably even performance as my maps generally end being a pit of lag (thus far it's controlled, but it's already taking 4ms to render as it is, so...).

This is a CTF map, with a base (yet to build) within the terrain, and with bridges connecting both sides.
I am not really sure how this map will play out, I am just focusing in the final image I currently have in my head.

Therefore, I will just post some WIP pictures over time until I finish it, starting with this one (the lighting is going to be a challenge, I just hacked some lighting around for the screenshot): 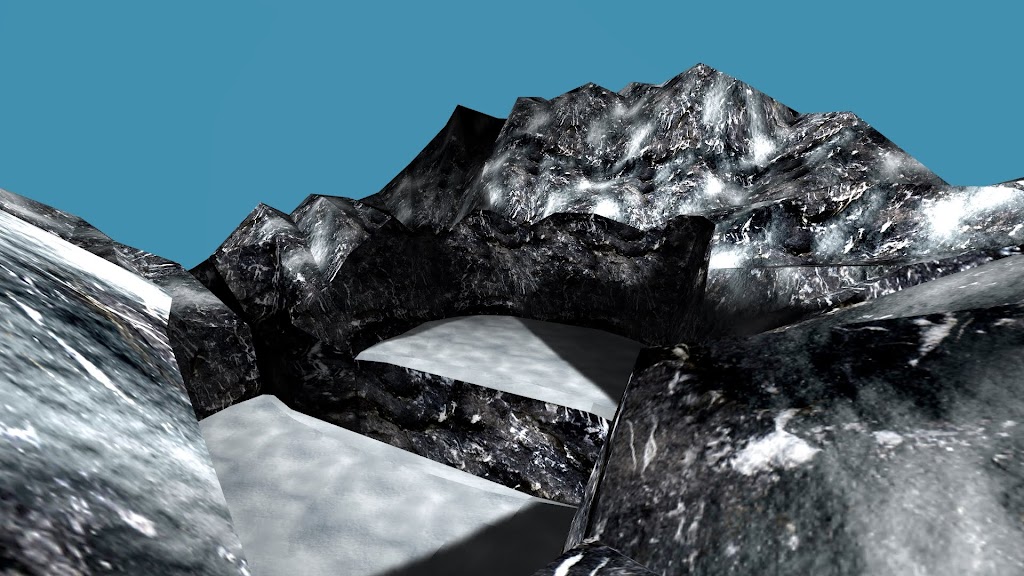 Nope, it's meant to be the most normal CTF map ever, with normal gravity and all, and although I took the screenshot from that angle, players are only meant to be at the center, where most of the snow is.
At most I will add the usual effects I add to my maps (in this case sun lens flare, cold wind, falling snow, dynamic coronas and glows, that sort of thing), and so I cannot fill at least the outside terrain with too many things, otherwise it won't be playable anymore, but other than that I will try to keep things very simple, even if to just be able to release it on time.

One thing I forgot to mention is that the whole terrain is composed by 2 brushes that I have sculpted (vertex edited) in the editor (1 brush for red and 1 brush for blue, they're the same but just rotated and facing each other).

Having that said, I finished up the terrain lighting (for now), and it took me longer than it should, and while it doesn't look particularly great, I don't think it looks bad either, so I am fine with it for now.
The area of this map is quite wide, and a single light cannot cover it all (sunlight), so I had to be a bit creative with the lighting, and have directional cylindrical lighting by using movers to control the raytracing, and the result is something like this: 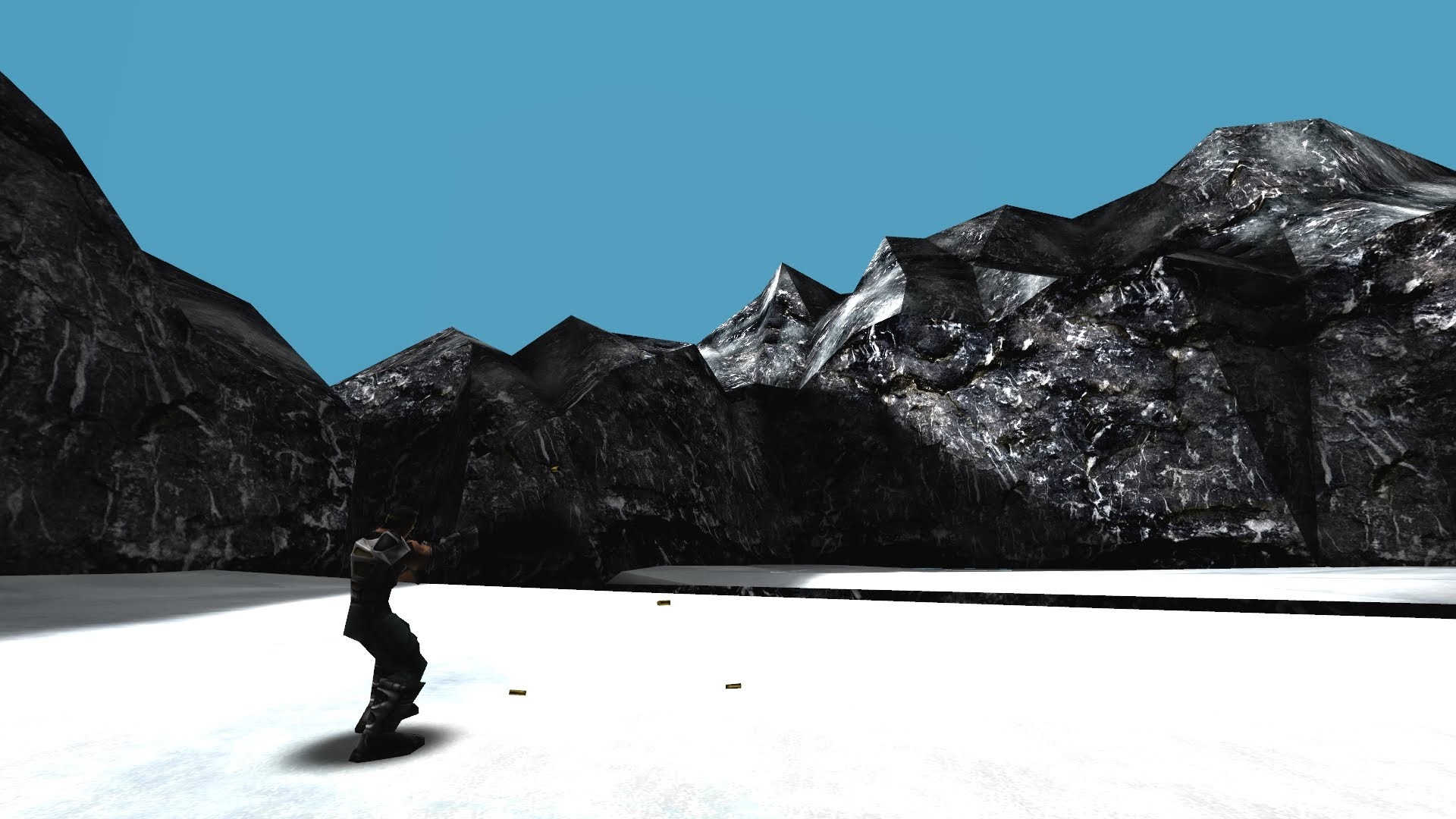 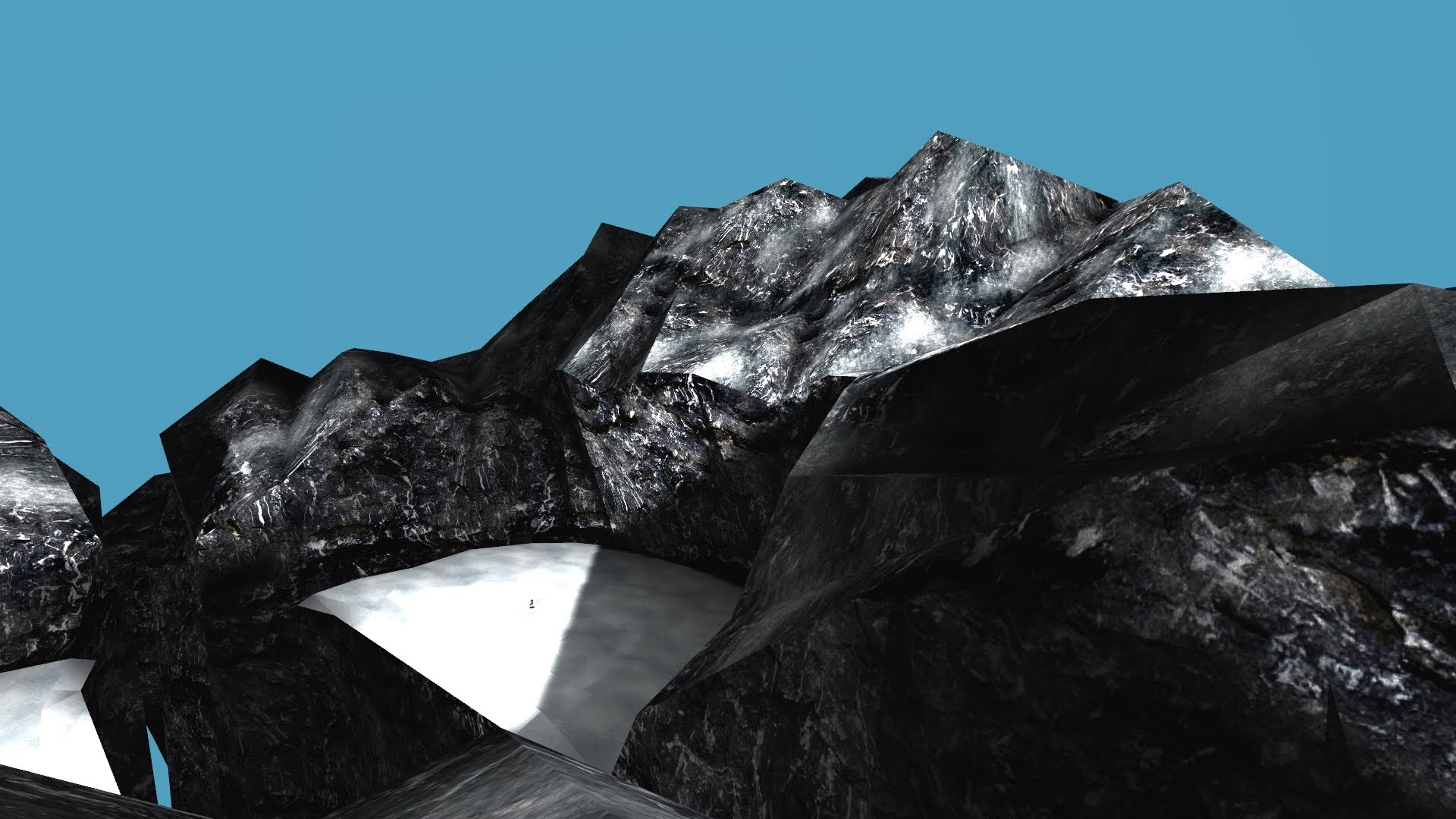 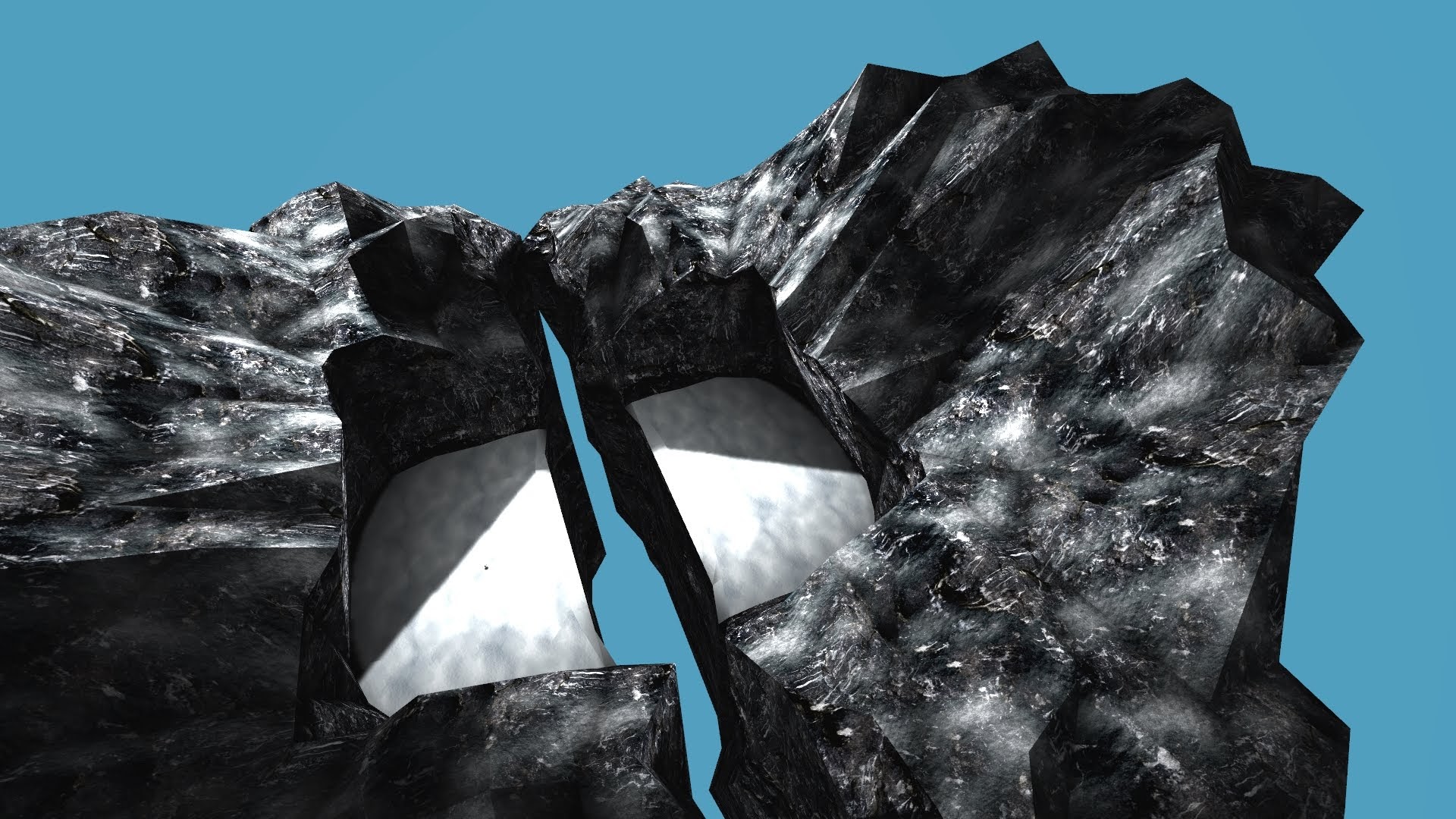 Feralidragon wrote:The area of this map is quite wide, and a single light cannot cover it all (sunlight), so I had to be a bit creative with the lighting, and have directional cylindrical lighting by using movers to control the raytracing, and the result is something like this:

Essentially, this map is meant to be lit up by the sun (day time), and in UT99 maps the best way to lit things up like a sun would is to use a light with LightEffect=LE_Cylinder and a big LightRadius, and couple that with setting up the outdoors BSP surfaces with High Shadow Detail enabled (generally, not always), to have well defined shadows from it.
From there, you just set up 1 or more lights to lit up the parts which are on the shade so they are not completely dark.

For most maps, this approach is simple and it works, because the parts exposed to the sun are generally small enough for a single light with the LightRadius=255 to cover.

But in the case of this map, such a light would only cover about a third of it (that's how big it is, as you see from the size of the bot being those few pixels in the middle of the snow), and you cannot just put a bunch of them given that, for "sunlight" to actually work, the light should be pretty much where you imagine the sun to be at, at an angle from the place you want to lit up, and by just adding lights around you get everything lit up instead, both polys towards the sun and against it as well, making the lighting look like shit.

So, between yesterday and today I thought in a way to get around this issue, and what I did was to use movers to prevent the lights from illuminating anything which is meant to be "against the sun".
From the lights meant to be used as sunlight, I set up movers so they would be right behind the light on key frame 1, and be elsewhere hidden on their base key frame 0, and from there I just set the movers so the world raytracing would use the key frame 1 of those movers (WorldRaytraceKey), so they would prevent these lights from illuminating anything behind them, but stay at key frame 0 so they would stay hidden during both editing and gameplay, like this:

And it worked.
It still requires a bit of work to set them up to a point where the lighting looks good enough, and it's still tricky even like this and it would require quite some time tweaking the lights and movers to get the best result possible, but I don't want to input that kind of time on it so I settled to a "close enough" result using this method.

You can also use Spotlights and copy those. It does mean you need a bit of finetuning by angling the lights so the shadows they cast are identical. But it helps a lot with stability.
Reminiscence - My map collection
My Moddb profile
Top

Spotlights were the first thing that I attempted, but when I saw the lighting effect it was somewhat clear to me that they weren't the best option.

I would need a lot of them throughout the map (a grid of them), risking some light bleeding and potentially longer build times, but the real killer is the snow area: while my screenshots do not show it very clearly, they actually have small bumps and ridges which you notice while walking around on the snow, and with almost any light type I would get a very flat shaded set of polys on the snow, making the snow look very solidified rather than smooth and fluffy, and with LE_Cylinder is probably one of the only ways I can get the shading very uniform throughout the snow making it look very smooth, yet with realistic ridges, as seen in the screenshots (especially the first one from my second post).

But I am open for any better alternatives if there are any, I was never that great of a mapper myself so I might be unaware of a better way to do this.

A little update:
- improved the lighting further (didn't meant to at first, but I wasn't able to deal well with the fact that the lighting was rather subpar);
- started doing the bridges (I thought in just one, but then I tried 3 of them, and it looks and probably plays much better, so I will try 3).

All of the textures I am using in this map are actual mixes and modifications from Hourences textures btw (mostly the higher resolution ones). 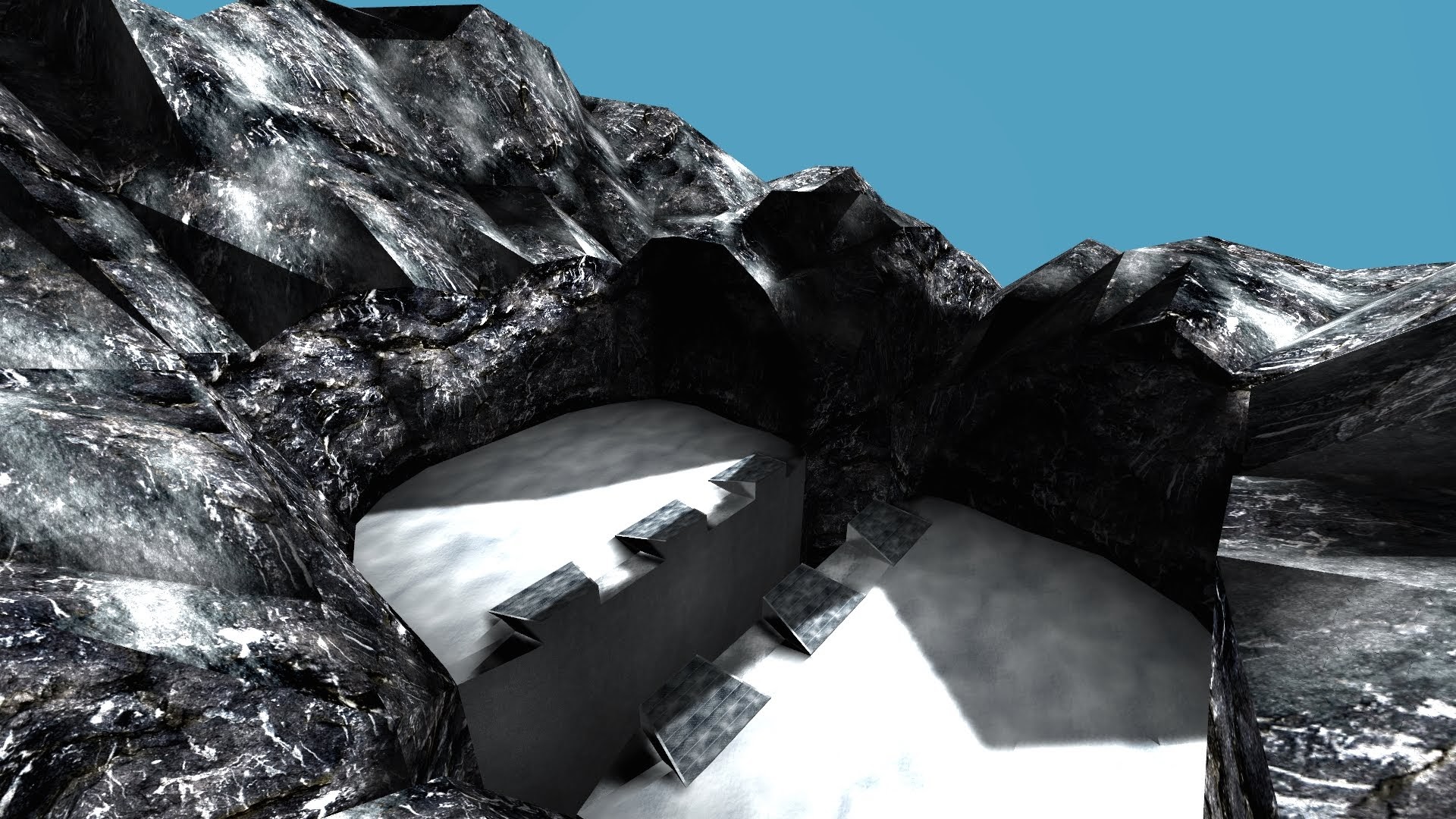 Another little update: only today I was able to work on this map again, but as you can see the progress has been slow, and while I have a somewhat clear picture of what I want to have in the outdoor area, I am still thinking on what I want to do indoors in the bases themselves.

However, one thing I noticed (accidentally) is that this map has the perfect size for a potential small VCTF (Vehicle CTF), given that as seen in the screenshots one of my tanks fits perfectly in it.
(No, the map itself won't have vehicles, is just a neat little detail I noticed while doing the map).

Therefore, it's 99% likely that I won't be finishing this map in time, even because I prefer to release something decent, than rushing it to a release, but I will at least attempt to submit it to the final pack. 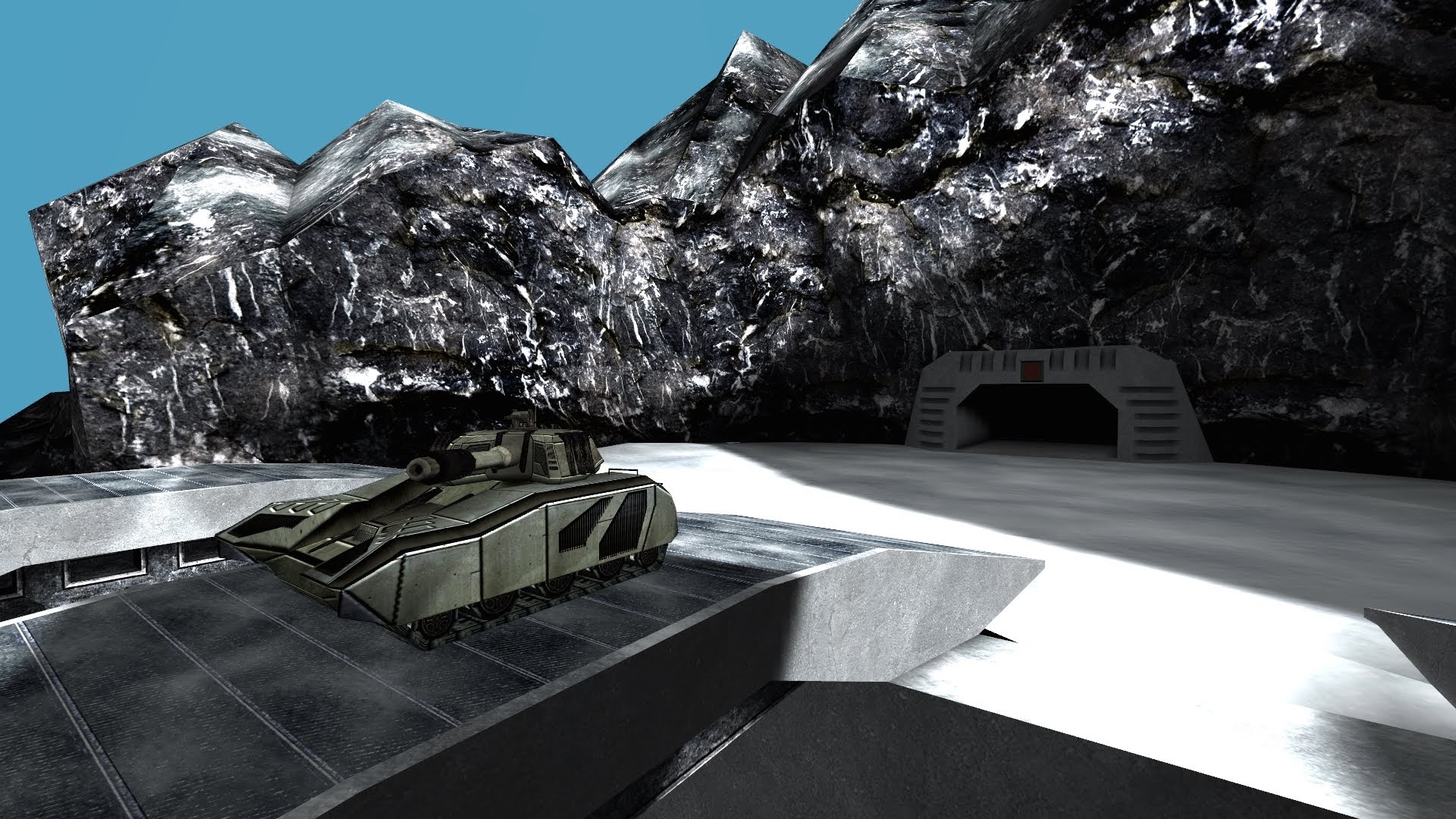 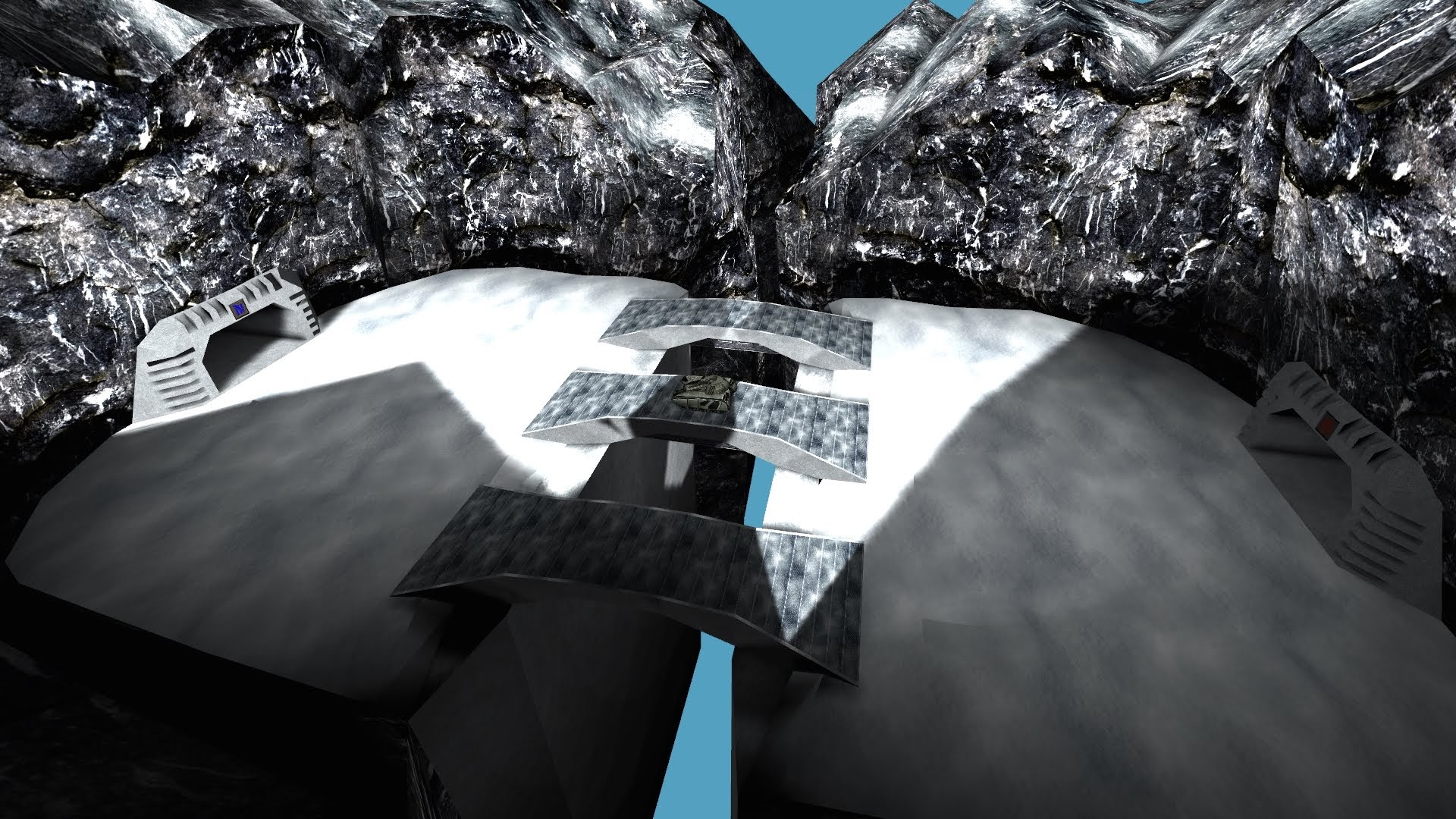 You could use your vehicle models as props.

I could, but it would make players very confused.
But makes you think, if there ever was a UT2004-like VCTF gametype, a map like this might prove it to be possible (and the smallest maps were the most popular in UT2004 as far as VCTF goes).

Another update: now the outside has more architecture in it and is starting to look less empty.

Don't mind the totally blacked out spots and architecture (the lighting will be mostly fixed at the end), and there's still some stuff missing on the outside (especially in the middle where the bridges are, the walls will have quite some detail to them, and 2 more bridges below).
Upon checking that it works quite well with vehicles, I thought into steering in that direction and make the map vehicle friendly, while still being playable without them, therefore I intend to release 2 variants: one with vehicles (to be played offline) and another without.

Also, I am still a bit at loss on how I am going to do the bases inside. I have general vision, but I don't know how exactly I am going to build them, but it's what I am going to take care of next, and after it I will finish the outside architecture. 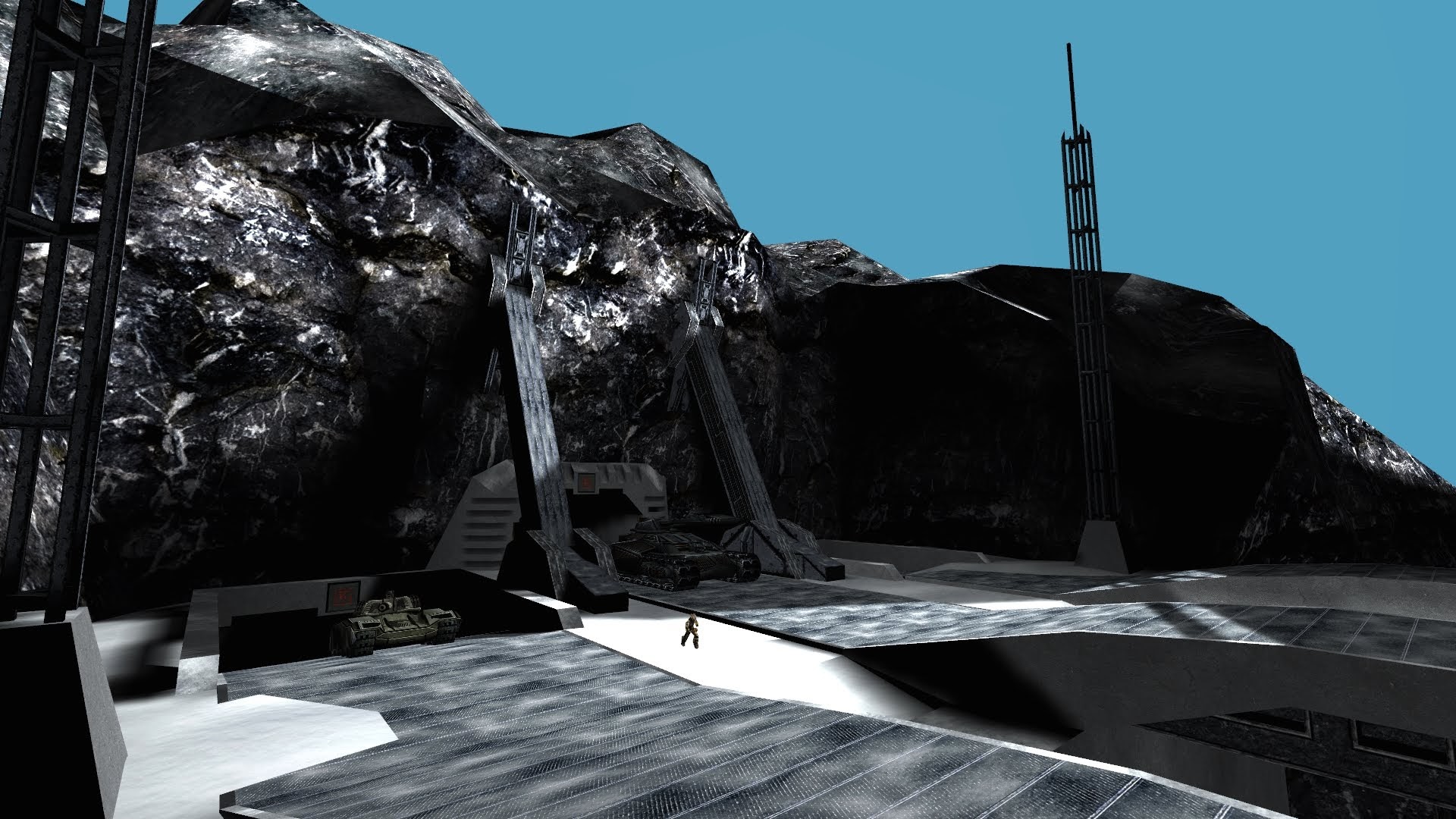 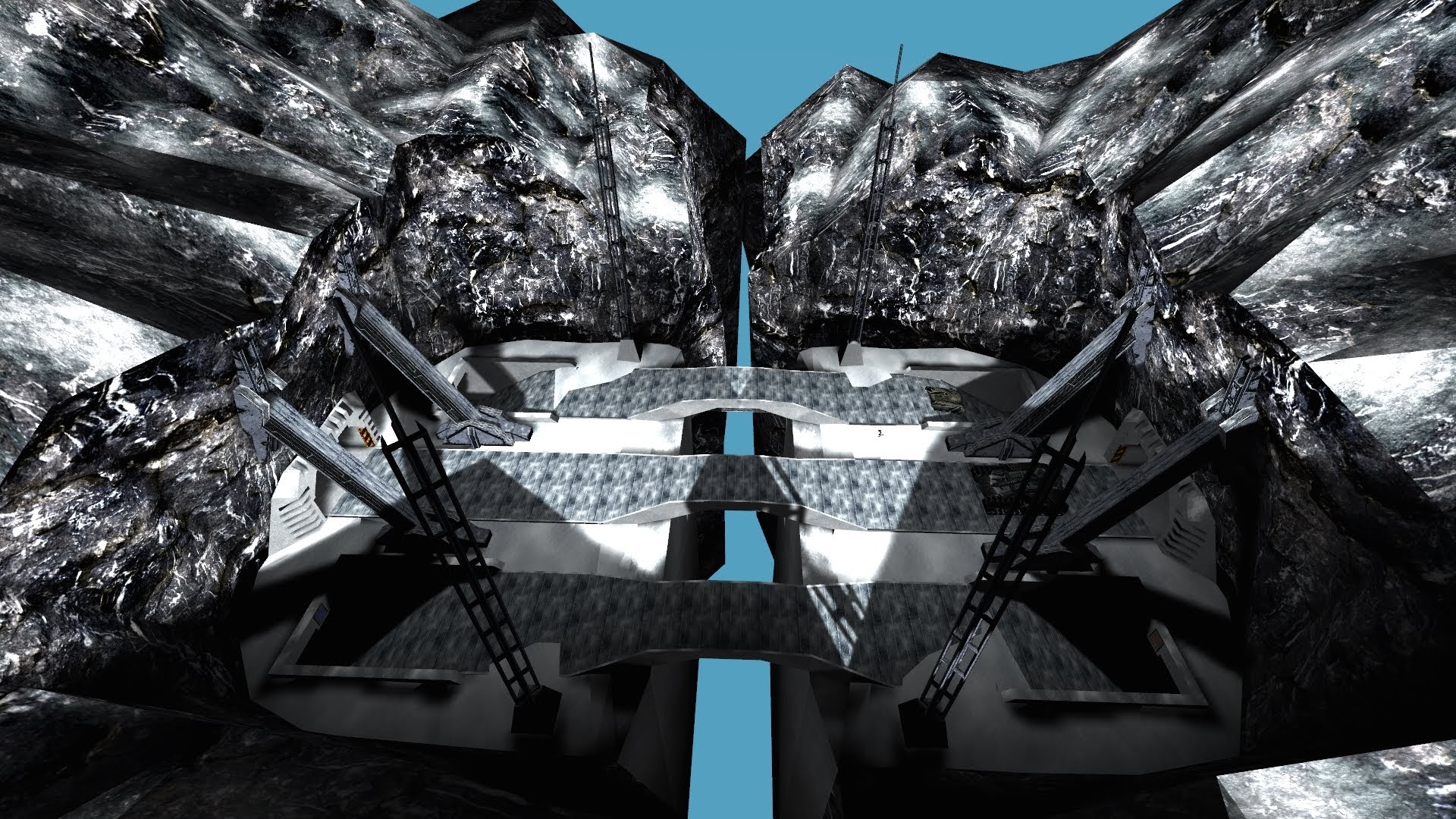 so the flagbases are down inside underneath the mountain, with the 3 entrances?
hmm... a few ideas:
I gather the bases - they would contain large hanger like areas for parked tanks etc., like a big "staging" area - perhaps seem like there are other
(fake) entrances from the rear of the cavern.. The base (mainly concrete block and steel with lots of crates and stuff) could have interconnected gantrys,
ramps/stairs, walkways, lots of big junk hanging from the ceiling of the (base/cavern) and of course some stockpiles of shells and rockets, maybe some other
artillery vehicles or pieces - don't forget fuel tanks and tanker trucks since tanks need fuel to move. Of course some sort of command and control room(s)
where the actual flag would be found... Sorta fight your way in then try and slip back out with the flag ... I can see this pretty well, erm...

Yeah, the bases are inside the mountain(s).

My vision is to have the flag at the center of the base, but at the level of middle entrance, with the middle entrance leading to a small bridge that connects to the flag, and have the overall base have a cold but rather sci-fi look.
I don't intend to really have a big staging area per-say, even because the base itself is not meant to be very big and I don't really want to spend a whole lot of time on this either.

But your suggestions are already a big help, they're starting to generate some ideas in my head, thanks.