Tutorials and discussions about Mapping - Introduce your own ones!
Post Reply
12 posts • Page 1 of 1

I didn't get all the polish I wanted to, but functionally, it's done. Here is DM-AMC-2040!

Misc notes:
The map is loosely based on Phantom 2040 for Sega Genesis.
It has a few custom textures, some Photoshopped from stock UT textures, and some made up from photos around the house.

EDIT: Hotfixed for the broken water issue mentioned below. 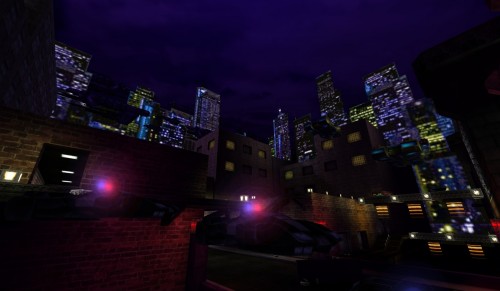 Hop across some hovering police cars for a shortcut. 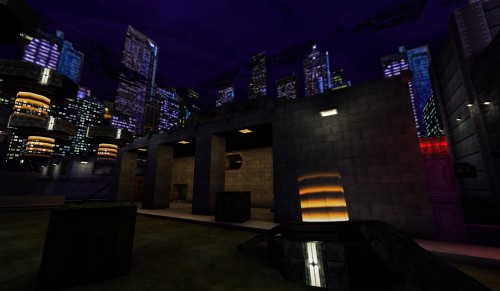 Outside the warehouse, a fallen hover-platform can quickly launch you to the roof. Somehow I got the kicker values right where I wanted on my first try. 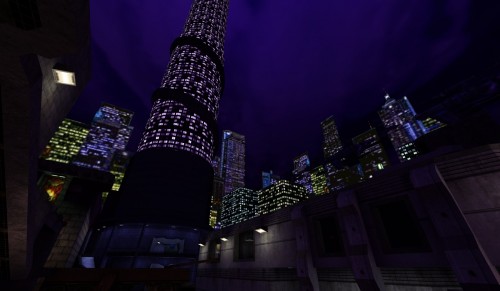 Looking up at the Maximum building.

Linked to in the Contest thread.

Decent map. UT doesn't have a lot of big DM maps, so a new one is appreciated. Will have to further playtest for a qualifed opinion. The river beneath the shieldbelt has no water / slime zone properties; you might want to hotfix that. Love how the cars can knock you off the shieldbelt bridge.
Reminiscence - My map collection
Top

Well done map with much variety

As Swanky mentioned, you won't die if you fall into the river.
Is it possible to reach the top of the tower with the lift, perhaps with another hidden easter egg?

Thanks for the heads-up on the water! I accidentally split it into separate zones when I was filling in the scenery

And thanks for the compliments, of course.

@Aldebaran: Haha, I actually plan on doing something with that in the polish-for-the-map-pack phase.
Top

Like the changes to the map since the earlier version 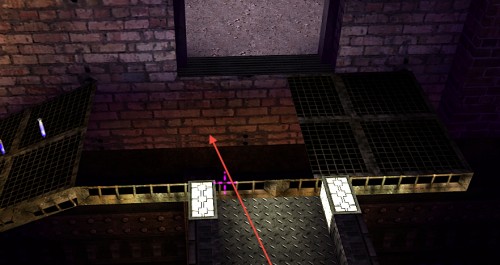 - it can be walked on, it's just that it doesn't look like it can. Hope you can identify the location from this rather poor shot.
Top

OjitroC wrote: Playing it just now I noticed that part of a walkway is missing
- it can be walked on, it's just that it doesn't look like it can. Hope you can identify the location from this rather poor shot.

OjitroC wrote:Like the changes to the map since the earlier version

Playing it just now I noticed that part of a walkway is missing
2040.jpg
- it can be walked on, it's just that it doesn't look like it can. Hope you can identify the location from this rather poor shot.

Crud! It's likely an easy fix, but since the deadline is only minutes away, I'm not going to risk another hotfix breaking something unexpected.
Top

Porch Viking wrote: Crud! It's likely an easy fix, but since the deadline is only minutes away, I'm not going to risk another hotfix breaking something unexpected.

You can try to fix it for the map-pack. on top of the low wall on the edge of the walkway. I think that the outer face of this wall is missing as well.

Plus this one here This one was a nice surprise!!! I played FFA with 7 bots OMG lots of fragging. Lots of places to go, some very unique areas (the "M" building with the curved staircase).
Lots of textures and saturated lighting as well! I would have done it a bit differently - but - I'll just add this aspect gives the map a bit of a UT99 retro feel. I was kind of transported to "back-in-the-day" (early 2000's) when UT was new and there were 4000 servers up on friday nights - many maps like this one on servers - lots of laughs and fragging. It is a big UT urban DM map - fill it with players - grab a gun and start running - there's plenty of battles waiting! If I was going to suggest anything, it would be to spend some more on the lighting in some spots to sweeten it a bit. Increase the ambient glow on your vehicles meshes - I know some have a value like 20 or something, but they look too dark on my system. I would suggest the skybox vehicle traffic textures - make them unlit or apply whiter lighting - they look black in the sky. a minor niggle, of course.
Builder rooms can be in a hidden group as well - might save you some nodes... Anyways fun map, thanks!
-=FraGnBraG Level Design=-
>>>Band-Lab<<<
Download: CTF-DMU-ClusterFkk
Top

As fnb said, the map is reminiscing on the good old days of UT. Not too many details, just mindlessly bastling away. And for that, it works for the most part. The setting of an urban city block works surprisingly well. The rundown blocks are working quite well, and even the hightech stuff doesn't detract. I know you wanted to recreate an environment theme from another game, but that blue tower is looking quite out of place. I would have probably used something else for the shanechurch textures, as well, but I'm not very familiar with the source material either. It's not super detailed but it works. I love the speeding cars, though. Flashy and deadly, and you found a good way to make them solid.

Now for gameplay. While it's a big map, most of the action is centered around the rundown building with the cars parked atop (see car16 for reference point). This is due to how much stuff is lying around. The map is crammed with guns and equipment, and basically 90% of bots were running around with the minigun. You could easily throw out around 60 - 75% of the weapons here I think. Maybe not as much, would have to playtest, but you could make each building / area in the map more unique and reasonable to travel to. Also, spread out health a bit more to different areas. A good example is the center workshop with the redeemer on in. The tower was mostly unpopulated. A stray bot went for the invisibility once but the place was pretty empty otherwise. SniperRifle0 is a weird place as well. It should be placed in a place where you can acutally snipe, like the subway nearby (which is, ironically, missing a weapon).
So I'd throw out a good amount of weapons, limiting available weapons to like 2 or 3 per building and always tied to the location they're in. Flak in the workshop is good. It's tight. You could place on in the bar in exchange for the rocket launcher. Not completely sure about it. Like I said, try each location with 2 to 3 guns tops and spread them out, so there's reason to travel to the far off places.
This also includes super pickups. Shieldbelt and Udam are fine, but I think invisibility and the redeemer could be placed in more remote / dangerous places.

Still, I somewhat liked the map. For now it's rather campy / mindless fragging, but it still has potential. Good job, hope it helps.
Reminiscence - My map collection
Top
Post Reply
12 posts • Page 1 of 1