by FraGnBraG
It's like opening the closet door and all the stuff falls out... I play a few maps, nostalgia kicks in - open that goddam editor and then mapping starts/continues on bunches of maps!!!
So I figure I'll post some of that stuff here - might finish some (although god knows why!?) I'll just roll along with this until it until a contest happens! At least then I should remember how to map

So here's one: something that's years old now - anyone who is old as me knows this one! Clever insane Unreal DM by Faceless from back in the day, later updated for the UT99 DMU mappacks by HellScrag. I don't know if Hellscrag got permission from Mr. Graves, but I couldn't track him down to get permission so never released. So remained an experiment: mirror the Unreal DM map to create a UT-CTF. Actually took a bit of work (because I'm finicky) had to rebrush and fix some bsp bugs, redo a lot of the texturing, lighting and then fix the bots to play for CTF. Overall preserved the original feel as much as possible. The gameplay is goddam hard with masterful 5 vs 5 or 6 vs 6 - often plays out nil-nil.
Of course, like any really tight lava filled map will have the little robots fall a lot and die, thus the human is the deciding factor. I called the map CTF-DMU-FusterCluck and I take no credit!

by Hook
Wow, you know, that puppy looks downright interesting.
Looks like it just may be a Gas to play!

It just may end up on a few of our CROSSBONES Servers!

by UnrealGGecko
Oh I remember that map, wasn't there lightnng strikes happening on it too? Really cool!

yup - this is the one! although, i think they're just for show... looking at this, from the side view ... the lowest level (with the lava) is really dark compared to the upper tiers...
so dark it is easy to mis-step and fry yourself... maybe just part of the challenge? I could place a few more lights sources down there or "brighten" the lava glow a bit. Another thing: due to CTF "xloc" you can hop the "top" bars all they way from base to base, but you can't use that as a route back with the flag. In fact, I'd be really curious to see how people handle this. I think teamplay necessary for successful cap. A Good sniper will make the top tier almost impossible. At the bottom you are in constant peril of mis-step or bombing - and you will eventually have to climb back up ramps where you're an easy target. FC pretty much have to "run the gauntlet" through the middle and try to not get knocked down ... very crazy CTF

Make the Lava unlit, put small enough radius lights for lava color at the bottom around the walls or pillars so you see the lava lighting up the walls around the edges, make like one or two waterwavey that people see at certain spots a lot of the time. for effect.

Then take a few "spotlights" make the "cone" setting like narrow like 32, or 64 or wider if needed and make them bright enough just so the ceiling looks darkish lave color but noticed without hitting the walls just a tiny bit. . and shoot those up in the air to hit the ceiling from the surface of the lava.

Then closer to the walkway but slightly below, add omnibumpmap lava color lights around the bright spots and maybe one large radius one above. brightness at 128

THEN you will be rockin !!

heh, well thanks but already way beyond that ... once I have the little robot FC randomly changing levels to escape I'll post a link. probably sometime tomorrow.
By then, I'll be done with it and anyone who wants to fiddle with the "experiment" further is welcome (because it's not my map).
Just beware the ghost of "Faceless" might haunt you too !!!

About the lava:
Try this ... open a map with nice lava, play it... go into ghost mode (ie. no clip) fly out into the black void then turn around and look at the map... specifically the lava zone...
Notice the lava looks exactly like the screenies I posted earlier in this thread. You can't see the lava zone unless you're actually inside the map

I wasn't going to change any of the lighting or textures, etc., just convert the map for CTF. Turns out I did pretty much what you suggested a few days ago, and re-pathed etc...
I assure you the lava in the map looks quite "lavalike" lol

and here's a few more screenies: 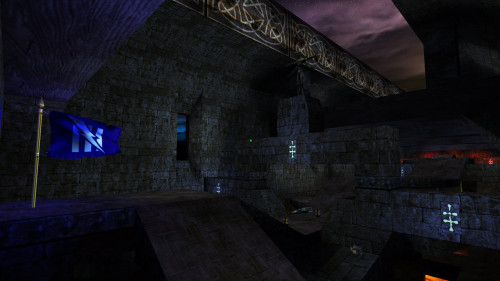 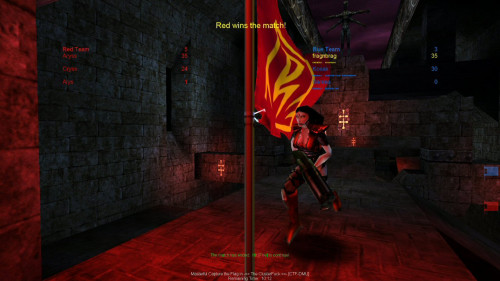 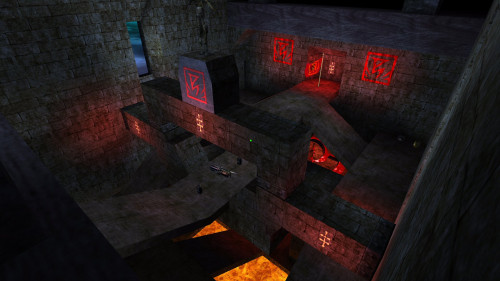 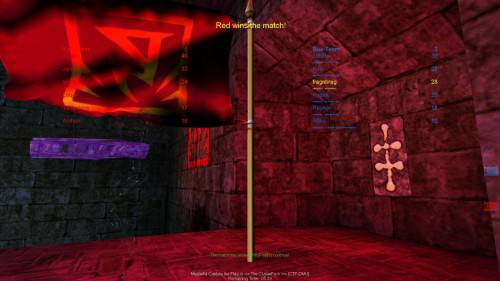 by FraGnBraG
I'm done with this one - so for anyone who's interested: CTF-DMU-ClusterFkk

by sektor2111
The problem - I repeat, function TOUCH is not even called for actors which do not have bCollideActors = True. In your case it's False.
Else... for debugging - like I said before, forum's syntax was screwing how the code should be - did not allow quotes written properly, and I cannot explain well in words so I captured an image for code's syntax which has to be used in order to check if those SmartAlternatePath actors are working: 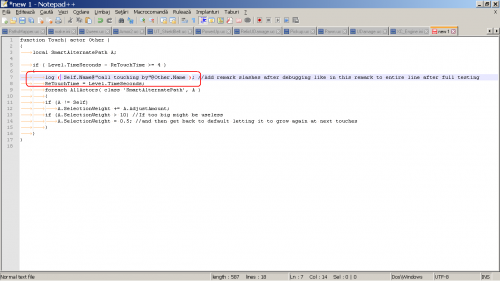 Use Zooming for a better view...

When An Actor is touching that thing, a log line is printed else SmartAlternatePath will work as a stock Alternatepath without changing anything.
Maybe "other" has to be checked if is a Pawn if I'm looking with these glasses...

Design: Nice as usual. You are one of those doing great maps.

... is that not the SmartAlternatePath actor that you fixed? I might have put the wrong one

damn - needs to have a different name!!!

well I can't fix it right now, as it is - the map should still work okay, just not the best it could be i guess.... its a small map so maybe not too critical!

by sektor2111
Nope, map is working no worries - last added lines bellow can be even ignored. That AlternatePath must Collide actors for being dynamic, it's about default properties, else... there is nothing critical because these are AlternatePaths to be sorted at random, they will be "static" in this format without collision. I played map a few time ago, I have to admit I like how are reacting my MBots in here. For MBots in XC_Engine sorting an AlternatePath is prioritized anyway and for this reason it's not that important for me to have very dynamic these actors.
If you do have more such maps I'm in for collecting them. Good job so far.

by sektor2111
I suppose it's about music because this is what I have and map works fine.

___
2nd point with that SmartAlternatePath. Let's help mapping and mapper with those needed default properties. How ? Actually we won't set anything except team and that SelectionWeight if we want, as option. And the code will do the setup for not making this MyLevel with no purpose. My proposal toward this Navigation Point is:

Credits goes at Shade for updating forum's software and this way I could write the code that can be compiled properly exactly as it by Copy-Paste-ing it.

Thanks Wises ... i'll repost a version2 map once I get some time -- which will also set the smartaltpath actors collision properly
to true ...

Just to affirm the use of these special Alt path actors ... I have another two smallish CTF maps just about ready, and these
SmartAltPath actors really do work!! The bots do start to use all the routes where you put them, even if the routes is well
off the beaten path (incoming and outgoing to base). You just really need to make sure you have SINGLE blue path line
through the actor, and no bypassing lines (for example, i find it's good to put them on ramps or in short hallways)
Also, there's a property called "returnOnly" which i'm testing right now, which might make things even more unpredictable
(and thus more challenging) when a BOT is the Flag Carrier ...

by sektor2111
Purpose as I see with these SmartAlternatePath actors is to have a more randomized sorting of routes. In order to work at "full power" they have to collide actors (not blocking actors) else they react as default AlternatePath and that function Touch won't do anything. That log confirms what I'm talking about. Track logs with collision for actors and without.
And this is the explained tech... which for me doesn't really matter that much, Bots which I'm using are using another way by themselves if CTF is not sorting one at certain time.
All times are UTC+01:00
Page 1 of 1
Powered by phpBB® Forum Software © phpBB Limited
https://www.phpbb.com/