The most RiDiCuLoUs Mapping Contest!

Tutorials and discussions about Mapping - Introduce your own ones!
203 posts

Not to worry, you already have another map in. You don't need 2.
http://unreal-games.livejournal.com/

Here is one from me! Happy holidays!
You do not have the required permissions to view the files attached to this post.
Top

Myth made a map for a silly contest ... at least one good thing happened this year.
-=: http://jokercologne.deviantart.com/ :=-

This is an arena styled map with an audience, up in the stands there are several monsters. Down in the play area below there are 2 Skaarj in boxes, held in by shields... but those shields don't last forever. 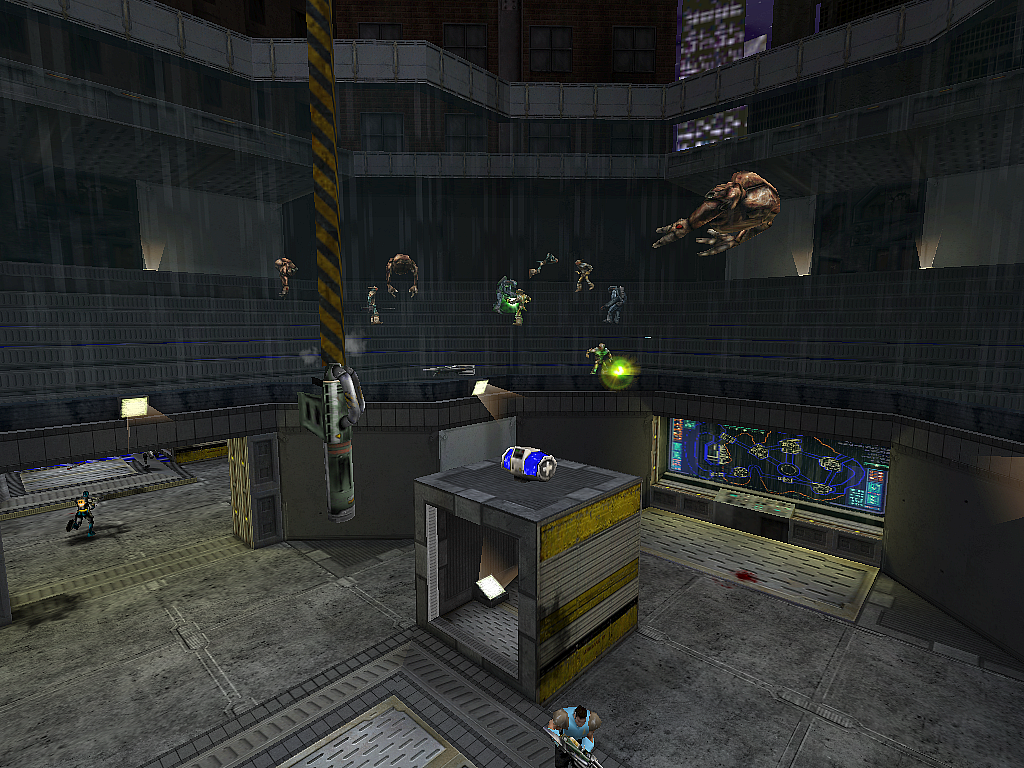 Combat is fairly intense between players, the boxes the Skaarj are in give places to duck behind and more so after the Skaarj get out. There are platforms on either end that raise up which may allow for a wider field of combat. See, there is a field surrounding the arena that keeps what's up there up there and what's below down there... but there are some slight breaches in it. Bots will occasionally shoot up at the monsters up there, some of the monsters (Skaarj Military) have their weapons and will sometimes shoot down into the arena; possibly a player could get up there and get weapons they don't have below.

Most of the monsters in the stands projectile attacks were disabled, but you can't disable from shooting SkaarjSniper if it picks up a sniper rifle. 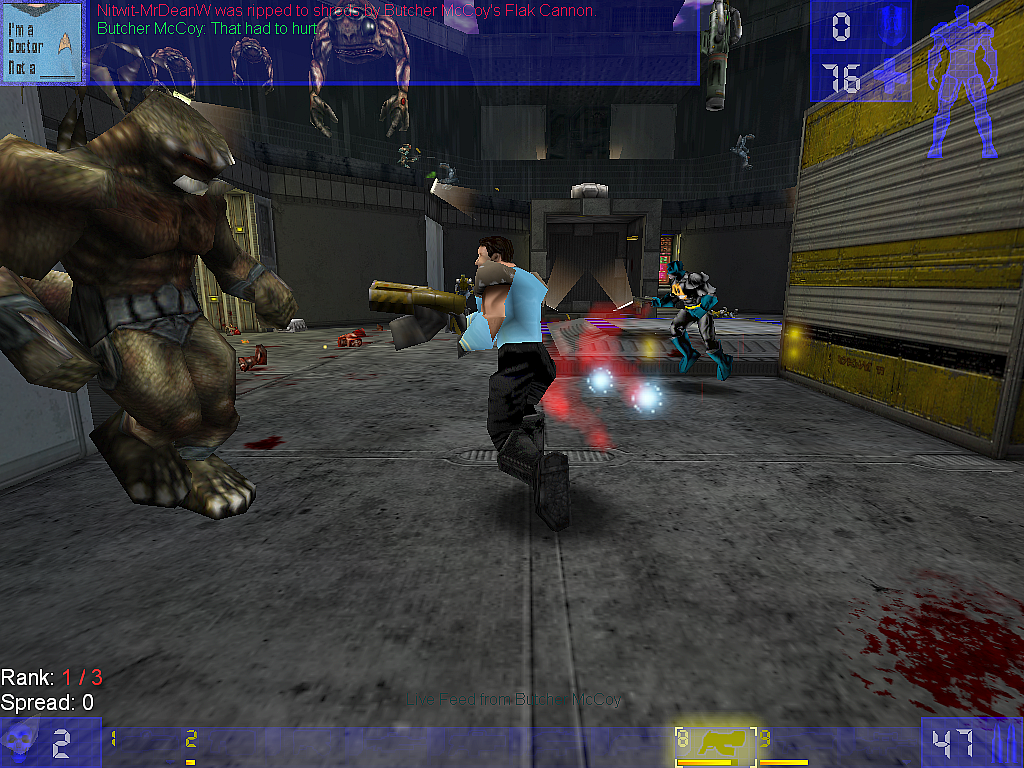 The map uses warp zones down below, which makes things interesting. 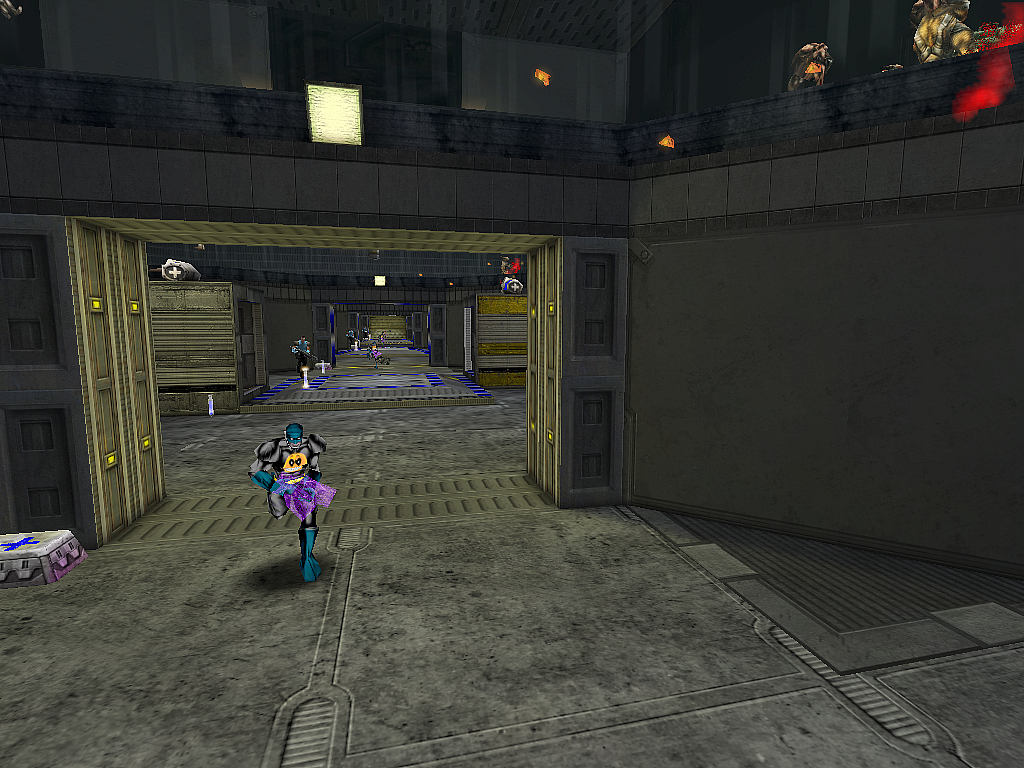 Ancient temple feel to it, 4 ends around a pillar; thought the bottom part was textured wrong until I realized it's supposed to look sideways. Plenty of room for a decent deathmatch, maybe ideal for Last Man Standing. 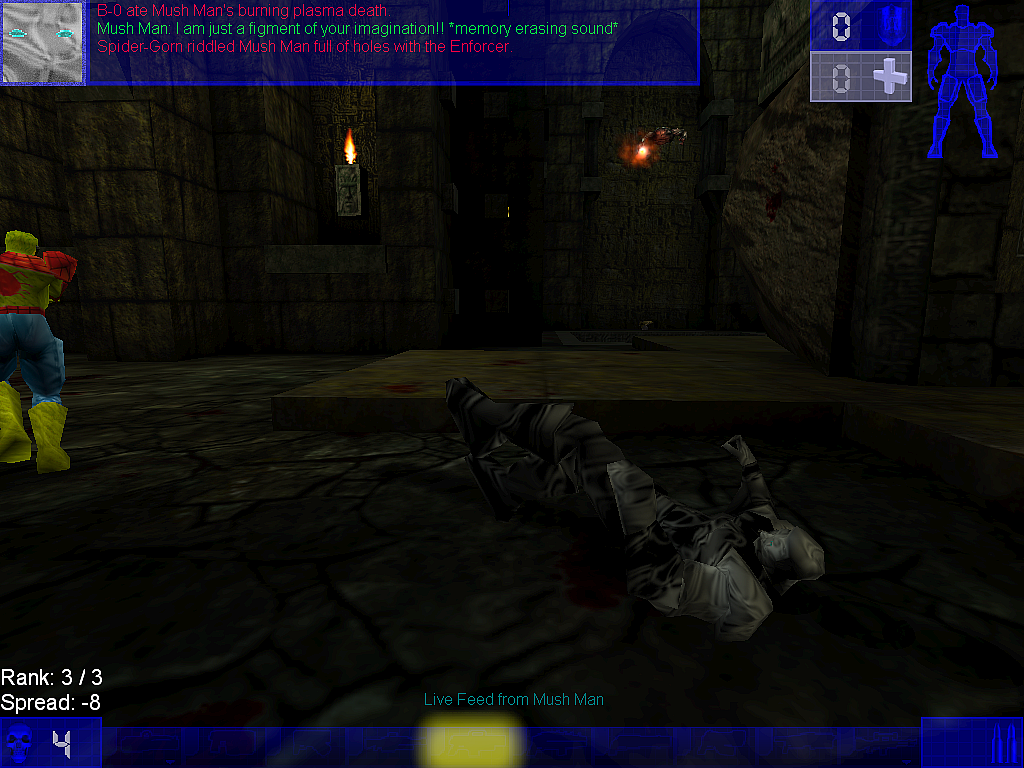 Having a konster that keeps respawning in after it's killed is ideal, especially one that flies in an area with ceilings that far up.

Bots use the full space, pathing was well handled here. 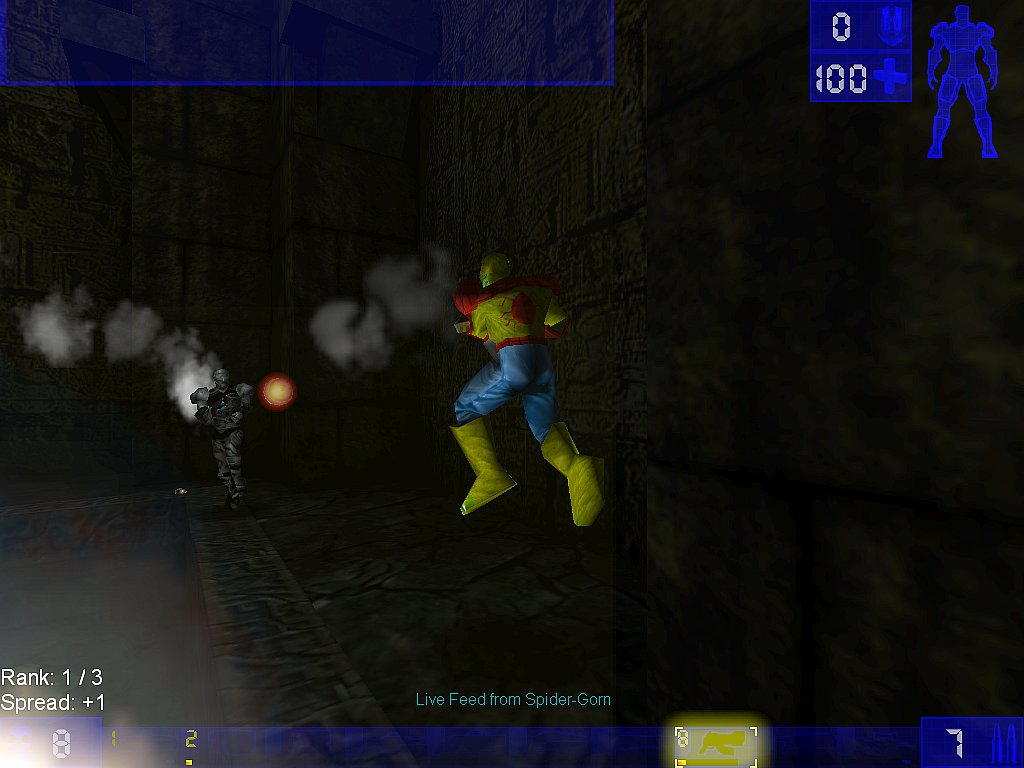 This is a very impressive work, and a definite contender for this contest. 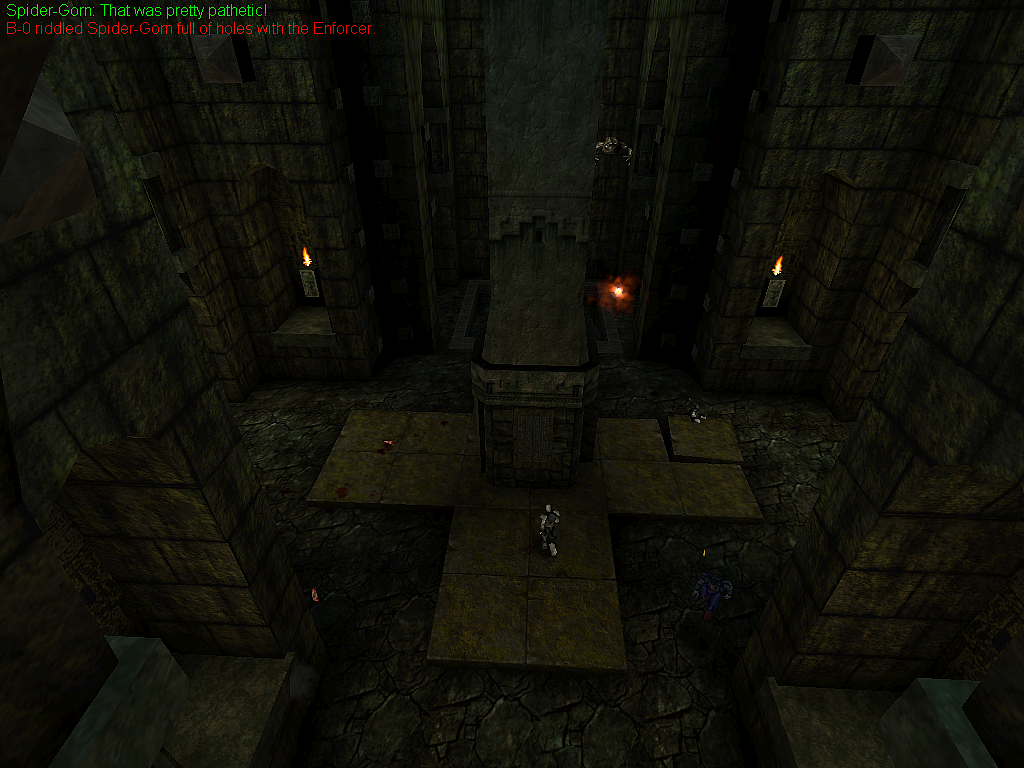 Myth made a map for a silly contest ... at least one good thing happened this year.

Thank you for the kind words. Had a few ideas in my head which I found to be easily translatable into this RiDiCuLoUs-ness. I came up with this orb effect many years ago, I would guess around 10, wanted to use it for a teleporter, but couldn't find a suitable map for it, well that is until now.

@EvilGrins: I'm quite impressed by your reaction speed! You got all the review up in no time. Good job!

Don't be so impressed...

...if we weren't in a pandemic I might not've noticed so soon.

What we've got is a single checkpoint in a largely rectangular map with structures built up. There's more or less 2 levels on 1 side, checkpoint is near to the namesake of the map... the special effect. 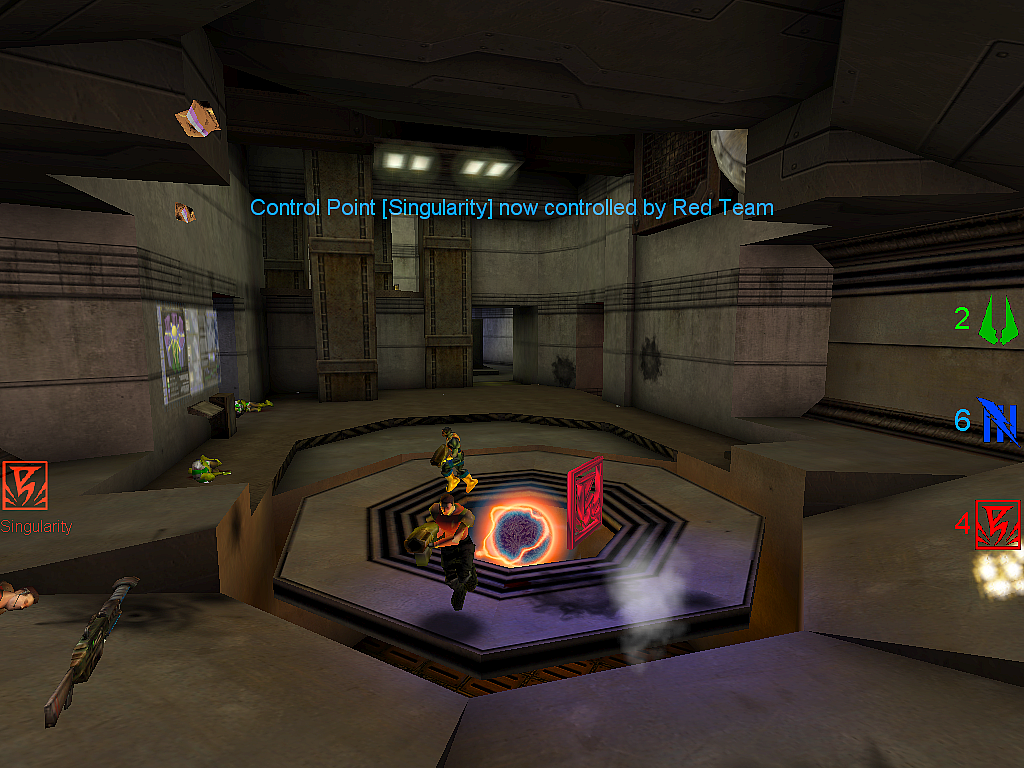 There are corridors and ramps, players largely do not spawn in close to the main play area. Skaarj start near the namesake... 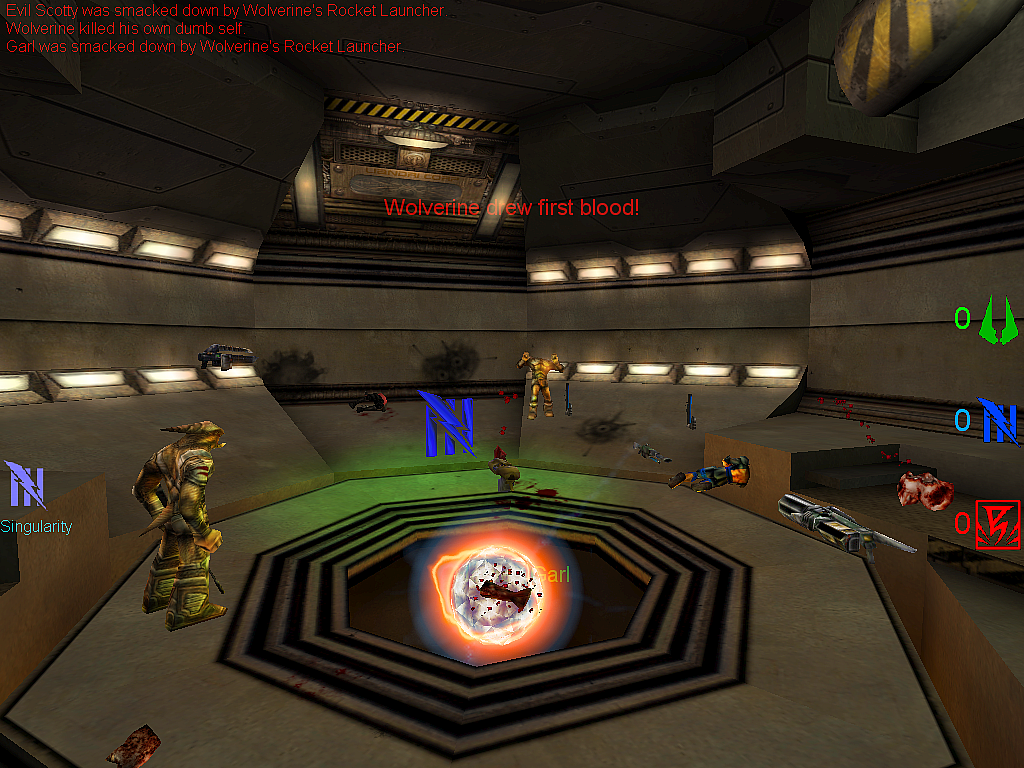 ...which is a glowing and pulsing orb.

Initially I thought anyone who touched it would get torn to shreds, but it's actually a teleport back to the opposite side of the map; has a nice spatial tunnel effect in transit.

There's really no effective way to guard the checkpoint, but the map needed to be small so that's okay. 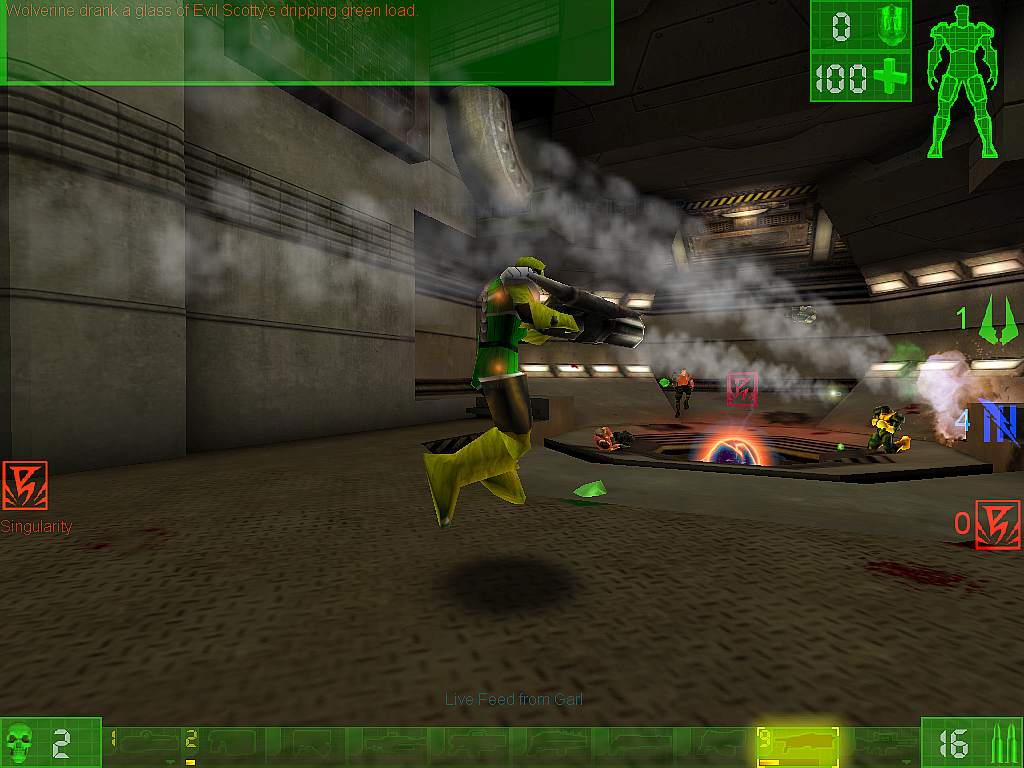 Map has only 1 slight glitch, a fairly common one for bot-pathing where there's pillars near ramps, but it's not that big of a deal. Only really holds bots back for 3 or 4 jumps.
http://unreal-games.livejournal.com/

Today is the final day of the contest!

Finish up your maps, you've gotta submit your work by the end of the day... and I'm on California time, PST so that's the meter.
If you live on the opposite side of the planet from me... it's already tomorrow, so consider this a saving grace.
Last edited by EvilGrins on Fri Jan 01, 2021 8:23 pm, edited 1 time in total.
http://unreal-games.livejournal.com/

Well, by my estimation you would have until the end of today, and it's 11:24am where I am.
Hmmm... seems the clock on the forum is different from local time by about an hour. Weird.

So, that's about 12 hours left, give or take an additional 36 minutes.

Might submit a 2 hour speedmap or something lolol
"The problem with dreams is... you never know when you're gonna wake up"

ya thats basically what i'm doing

speed mapping! She ain't pretty she just looks that way - little despsnow arena full of boxes, ramps and space for some big monsters (but no particle system cause that will crap online, oh well)

Whelp, here's the results of my speedmapping attempt lol

~SZ~
You do not have the required permissions to view the files attached to this post.
Last edited by SteadZ on Sat Jan 02, 2021 4:23 pm, edited 1 time in total.
"The problem with dreams is... you never know when you're gonna wake up"

here's mine...
man this is a pretty crappy map (what was i thinking! )
well anyways, it works!

oh, did i say it's crappy? and rediculous too...

Most folks when they get a new map they jump right in and test it. Others opt for popping it immediately into UnrealEd.

For this contest I've been running bot-matches, 3 bots and virtually no mutators for the most part. 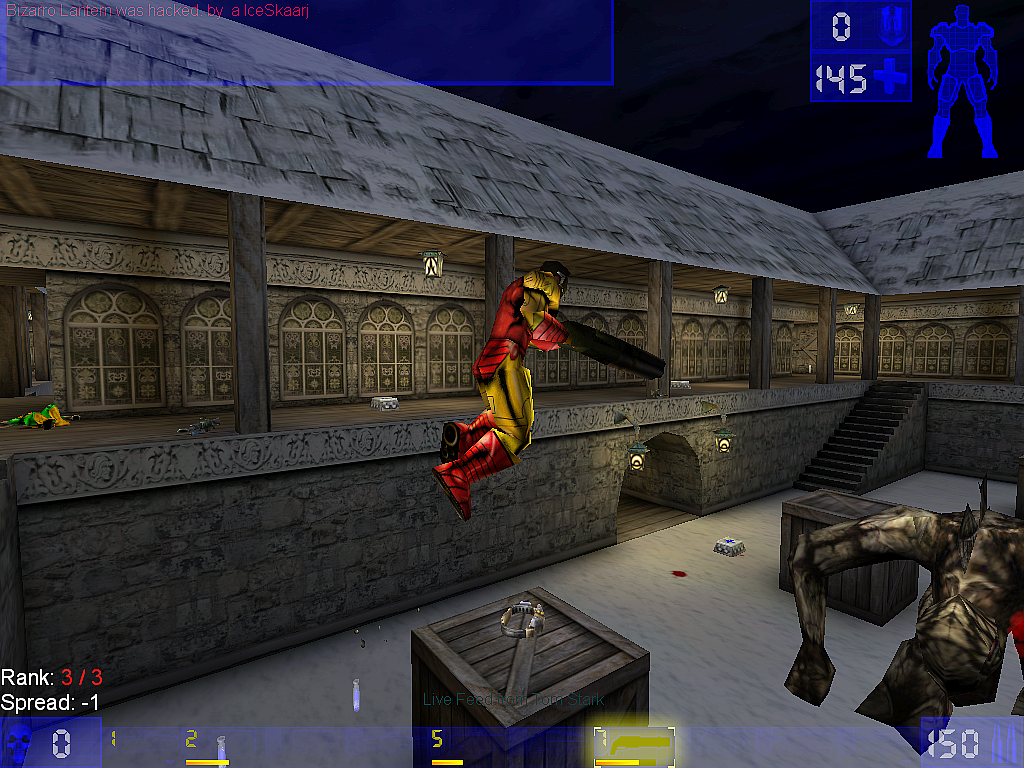 One of the key aspects to this contest was that the map needed to be tiny, and this one is kinda pushing the boundaries on that more than a tiny bit. My initial thought was the map was using Warp Zones, as I was cruising through in spectator mode, but the monsters threw me a bit there... as there's different ones in each of the 4 parts, though the smaller ones can enter different sections.

Relatively speaking, compared to the majority of the maps Frag's made, this map is a lot tinier than his standard norms. 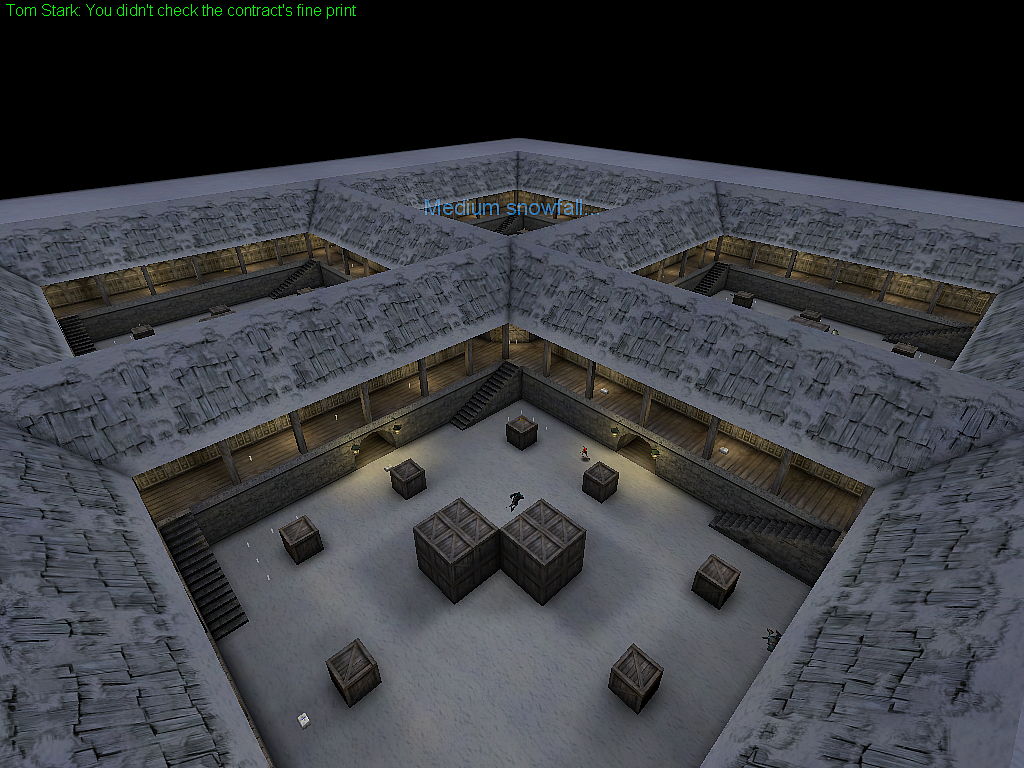 What we've got here is essentialy four not so tiny rooms with corridors in-between them; haven't entirely checked but there may be rooftop access as well. The main play areas are lower, the way to access the other parts is higher up. Each of the 4 main areas has its own monsters.

Given the setup I might've gone with a Brute over a Behemoth, but with 4 different types of monsters I suppose it makes more sense to have 2 large and 2 small.

Stone Titan, Behemoth, & Ice Skaarj pop in 1 each at a time, Krall come in 4 at a time; there are creature factories to replace those killed. 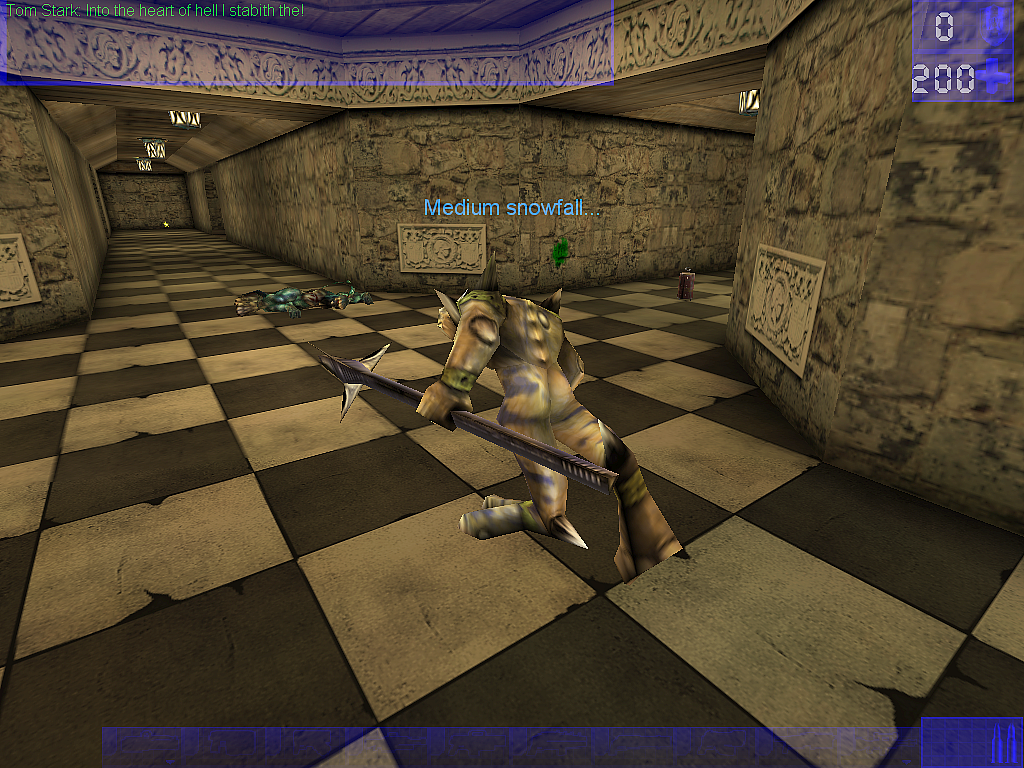 Corridors between areas are well done and detailed, not too much and not too little.

There's plenty of things to duck behind in the main 4 areas and archways in the others to duck in and out of within the corridors.

Map also has some interesting little messages that pop up during combat. 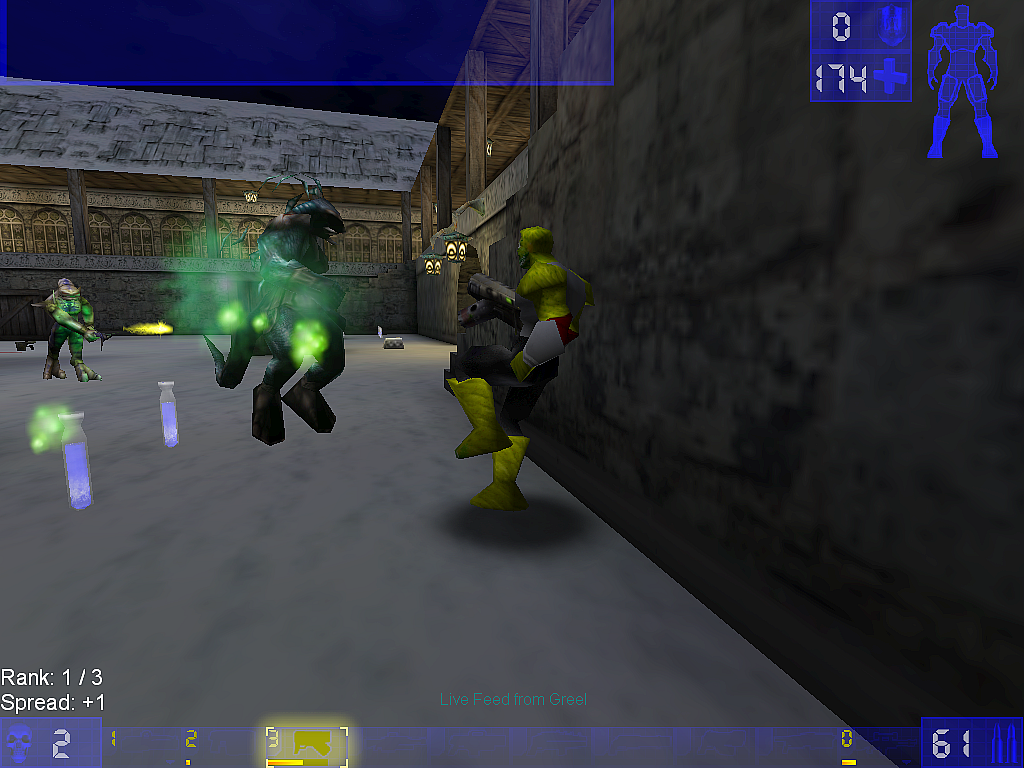 Combat is fairly intense between players and monsters, in some instances between monsters and monsters too. Size and mix of monsters can make the match last longer, though you do get points for killing monsters it's not so tiny that you get quick kills here.

I am suitably impressed, especially given this map was made in less than 1 full day. Gods only know what Frag might've done if he entered this contest earlier.
http://unreal-games.livejournal.com/