Tutorials and discussions about Mapping - Introduce your own ones!
54 posts

Will post the LINK once the package is ready

I'm not too sure whether the lower or outside routes are worth keeping. They divert from the main flow of the
match and are pretty linear. Eventually you have no choice but to get back to a main route so there's no real
advantage (they don't get you to the flag any quicker than the upper levels). Anyways, opinions on that stuff
will be welcomed.

There are in the full build a few high-poly bad spots, one hits 900p/1460n when looking down into a pit in the middle arena.
A bit of a jitter if you happen to look there, but doesn't affect the Framerate on my machine, at all. oh well.
Generally speaking seems to run pretty well.

I did have an issue with slowdowns entering areas with excessive amounts of visible coronas, so I just deleted the issue away for now.
So some lights (usually wall lights) look a bit bland since they lack hotspot. There's still corona lites, just a lot less of them now.
Did improve performance a bit.

With teams of 8+ it is very difficult to Grab and cap and pickup gets scarce. I personally like to play CTF/iCTF with 5 vs 5 or 6 vs 6.
More than that gets too chaotic, less than that it is always too easy (unless a really small map layout). anyways, that's just imho.

It is actually pretty fast to get from flag to flag, IF unopposed. However, normally, not the case since the bots change levels all through the base and can kill you fast. Plenty of "death from above".

*** After a short spell they seem to be using all the routes (thanks to sector smart alt-path actors)
even caught a few little robot buggers outside having a swim, lol!

If you really learn the layout, and are good with XLOC / hammer then I think you can certainly take advantage inside the base.
That said, if you're shitty with XLOC or just use the various lifts, jumpads and teleports then you'll likely be grinding a lot. You have to be smart (or use teamwork) to get the flag and get out alive.

Sometimes a robot survives.
Important, always grab that sniper rifle on the way out of your base.
Many times it was my "last chance" to kill enemy FC right before he capped!

So here's a look:

Cheers
You do not have the required permissions to view the files attached to this post.
-=FraGnBraG Level Design=- ***UPDATED! even works on your phone!***
Top

I got your back, brudda!

Cuz, you know, you can't double post so until someone replied to this you really couldn't add anything else today.

I had some really naggy HOMs that I finally squashed, well, there is a leaky section that seems unfixable, not too big of a deal - I marked the area with a few traffic cones!

1. Use this link if you already have MH-Antalius and CTF-FacePalm maps by Creavion. I did not include the .U and .UTX file in my zipfile. 39 Megs
CTF-FNB-AllGoodThings-BETA.zip *** LINK REMOVED ***

2. You can use this link if you DO NOT have MH-Antalius and CTF-FacePalm maps by Creavion. This includes Creavion's .U and .UTX files in my zipfile, so it's really FAT! 93 Megs.
CTF-FNB-AllGoodThings-BETA-All-Files.zip *** LINK REMOVED ***

Anyways, try the map and provide some feedback
please read the readme file

I can see right from here without even playing, that one beam there is off by one UU grid .

This supports UZ compression. Amazing looking map, my finds around are sent in PM with images.
If you want I'll send you all Log for figuring entire inspection.
Top

That would be great

The map looks really great (as usual) - nice and big with so much to explore and so much of interest to look at (plants, posters, the outside underwater environment, etc) - the surprise on falling into the 'pit' is nicely done.

I haven't played CFT in it yet - just dropped a few monsters in with MonsterSpawn so I can't comment on the CFT gameplay aspects (I did wonder, though, that given the large number of Securis(?) doors and panels whether it would be advantageous to distinguish in some way the ones that open from those that don't).

The leaky section certainly isn't a problem as it adds a touch of 'chaos' in what appears to be an otherwise well-ordered world.

When wandering around I did find a couple of invisible walls -

in the red area, immediately in front of me - it is possible to get along that walkway but the 'wall' extends for much of the width from the box on the right to the start of the steps on the left
Shot001.jpg
in the blue area, not far from the flagbase. It is not possible to walk up the steps as the 'wall' extends from the planter on the right round the base of the steps more or less to the planter on the right.
Shot002.jpg
I hope you can identify the areas from the (rather poor) screenshots - if not I will try and take better ones.
You do not have the required permissions to view the files attached to this post.
Top

Looking at maps like this one makes me want to give up on advancing in map editing.
Top

the bigger the map bigger the headaches! so I still have a lot of work to do.

I will fix these bugs, and that will cause more bugs. Eventually, god-willing, I have a build with no bugs. That's the price of csg complexity. Don't aspire to complexity

Just keep mapping and work on making your idea FUN to play for other people and decent looking/properly built.

Several 20AC maps are well-made maps, but the best example of what I think new mappers should aspire to is sinnical's map "dm-20-AC-Recourse".
That map has a very good layout, has great flow, lots of z-axis features, and has a consistant theme with nice lighting and ambiance applied everywhere.
BOTS will go everywhere in the map so can't really camp - ue1 loves the map - no glitches or slowdowns. The important point is that sinnical pulled it all off in less than 1000 brushes.
That's impressive

although, to be fair, sinnical is very experienced and has high design skillz. I suggest you should study his map. It's a good example of ut99 mapping.

wow dude this looks better than a 2k era map. I really like the secret room with the inspirations for the architecture, its amazing what s3tc textures can do in ut99

#1 in the red base there are plaques with team logos on them, one of them appears to be missing half its geometry #2 in one of the tubes with hazard cones there is a stray piece of water geometry floating in the air. I assume the area is meant to be flooding or leaking evident of the cones but this square of area where the tube bends is a water zone from floor to ceiling I know its a beta but I figure I might as well point them out anyways. the map itself is great and the bots seem to be able to traverse to each flag with ease. I honestly feel like this is approaching or already at the summit of mapping for the unreal 1 engine, the visuals are pretty stunning

EDIT: OjitroC already pointed out the stairs bug, sorry about that

Thanks for the feedback!

Here's BETA-1 with the fixes:

Note this zipfile does not contain the giant Creavion texture file.
If you need that you'll have to get the BETA "All files" zipfile.

Wow I am glad I could teach you how to map like that.

I must say all the years of large mapping you have done has paid off,this map is a 9.9 at nalicity.

Just friggen excellent awesome, I always wanted to go out in that damn water from bioshock, it don't run slow at all, the lighting is friggen just like I would like, then all the deco, it would take me ten years to make this map.

I don't play CTF, however it didn't confuse the hell out of me trying to get back to my flag, I think it's the lighting or something because other CTF maps I run around in circles trying to figure out which way to go.
Binary Space Partitioning
Top

Lots of amazing visuals, multi-level combat while still easy to navigate around; overall great feel. Even cruising around in spectator mode while my bots had a go, outside in the water I could barely make out the corners of the map.

My issues are 2, barely anything really. They just seemed odd to me:

1) The flora/plant-life all over is great. It's a lot but never too much... however there's some Unreal1/ut99 plants in the mix with the other far more advanced plants. Mostly in the corners or not in the bright light but they just look very out of place. 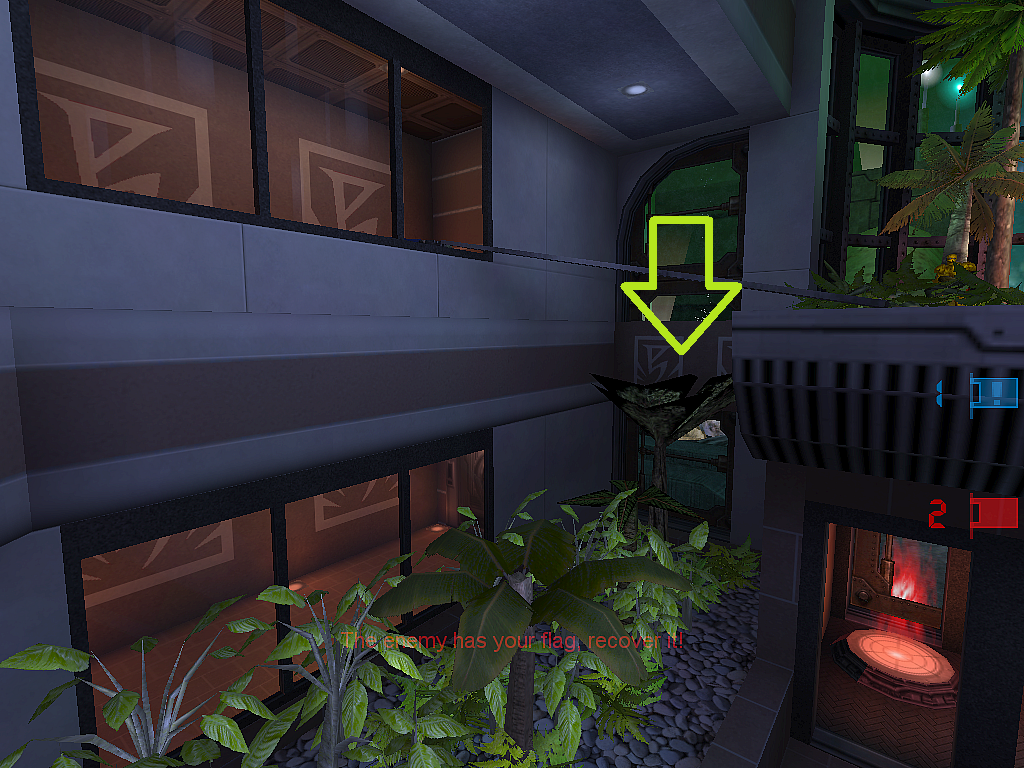 2) Reading others' comments I learned about the trap door and the falling, though where it winds up seems a bit weird... being in an underwater base and you plummet downward yet somehow wind up in what looks like close to the surface. Not a big deal, but this just seemed especially wrong... 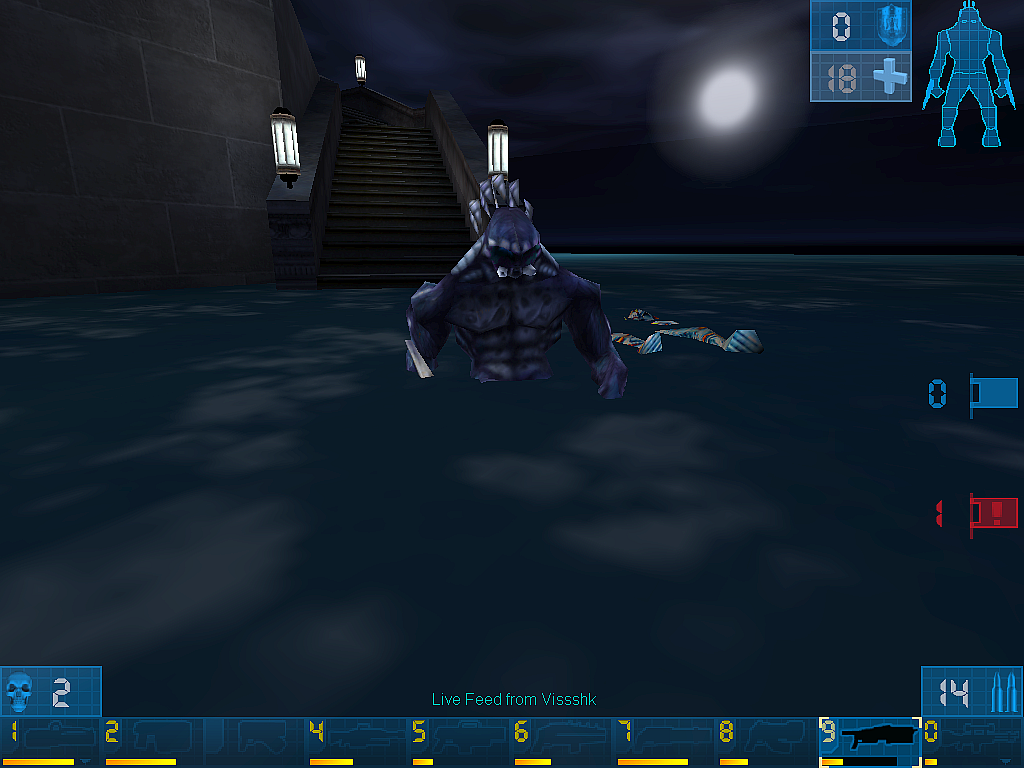 ...with the vast amount of underwater sealife, it just seems weird that he's out in the water and nothing's trying to eat him.

Obviously my 1st go through I went with bots and not that many. Next time I'm gonna go with a full compliment and mix it up with them too.
http://unreal-games.livejournal.com/