Tutorials and discussions about Mapping - Introduce your own ones!
Post Reply
44 posts

One thing I like about this forum is there are mappers here who will jump at a chance to fix maps with issues or tinker with existing maps in order to improve them, and as most of us know a lot of the maps that were initially designed for Unreal1 also can be played in ut99, but understandably a lot of those U1 maps are not as advanced as what we like to see in ut99.

Lot of extra time on my hands, I decided to go out and check out some of those older maps and make this 1 thread for any I think mappers might wanna see if they can improve.

It's a large space with a lot of shops and ramps and levels that I think any mapper who might wanna see if they can improve it could try their hand on. Most of the mall maps I'm familiar with are mainly used in MH, though not all as there's a couple DM ones too.

Anybody wanna take a shot at this? 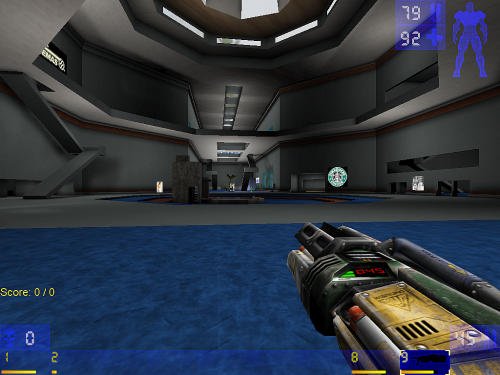 Yes, it would be nice to see it updated BUT should really ask J Martin first?

His website http://islandalien.com/unreal/ appears to have been last updated 2019 and

J's Website wrote: All "J's Maps" are made by and are the property of J. Martin, and are exclusive authentic originals. All maps, mods, skins, images and contents of this website unless otherwise indicated are copyright ©2019 by J. Martin, and are intended for non profit public display in its original condition and format only. Selling, copying, editing, redistributing, modifying of this property or altering the author's signature or contact information in any way is prohibited.

I absolutely agree. best to ask first - or at least attempt to. be prepared for blowback if you didn't ask the author
and he/she (or the IP owner) takes offense.
-=FraGnBraG Level Design=-
>>>Band-Lab<<<
Download: CTF-DMU-ClusterFkk
Top

Certainly an overall improvement, it's fairly bland with a lot of walls in a default charcoal gray but the detail of the overall space is nice.

I absolutely agree. best to ask first - or at least attempt to. be prepared for blowback if you didn't ask the author
and he/she (or the IP owner) takes offense.

Hey, you know me... I'm a crediting addict. 1st i wanted to see if there was any interest... his site is filled with maps and I've earmarked a few dozen for this thread if I could find any interest.

I absolutely agree. best to ask first - or at least attempt to. be prepared for blowback if you didn't ask the author
and he/she (or the IP owner) takes offense.

I am so tired of all this "permission" shit these days.

In the year 3012 I am remaking all your friggen maps, sue me, LoL

Point being, the only reason UT99 is lasting so long is because WE NEED old maps to learn from, NOT all the "Cooked" Directory BS. like they did in newer UT versions.

Matter of fact I am going to upload a "stolen" version of a map CTF from some guy 15 YEARS AGO from Startrek elite force.
After I spent many hours with messed up BSP converting it, cry me a river.

There's a vast difference between opening a map in the editor and using it for your own personal learning, and publicly releasing someone else's content with your edits - and this author explicitly went as far as to include his own "license" notice/terms.

I agree the "closed source" nature of newer Unreal engine's baked content is generally harmful to the modding community, but just because you can directly edit someone else's works doesn't mean you have been granted a carte blanche license to release modified versions of those works.
ShrimpWorks
Unreal Archive - preserving over 20 years of user-created content for the Unreal series!
Top

Actually this old map is demonstrating what I said in thread with Editor stuff about useless bytes hosted in NavigationNetwork... lol. Map is Unreal out of UT bytes and out of Unreal227 bytes...

By converting map using UT Editor you'll gain extra bytes - new NavigationPoint properties - yeah, trash bytes more exactly, to explain different. Indeed pathing is poor here and we do have technology to make in better and not having so many stupid bytes added.

With regard to permissions chapter, and for making some light around, let me know about your plans in this map with ALL brushes stripped except Movers, of course, and that button which is spoofing a Lift without paths. For me map it's NOT READY and we might want it FINISHED.
The rest of fixes might not be needed that much because DMMutator is replacing old items with UT items automatically even if I don't really need that - I'm not playing DeathMatchPlus from BotPack and my pawns definitely want PATHS not what is here - RAMPS included where I can demonstrate that RAMP nodes don't need 300 400 distance, they might work even at 800+ distance. This is a good environment for pathing practices - to no forget those small spots behind glasses... Good choice, EvilGrins, good choice, man... Respect !

Edit: Self-note:
Perhaps do we need to wait 30 years for J.Martin to finish map ? Okay, let's wait... I've started waiting... And during waiting state maybe we can use a temporary version, a more or less private version, until a final map comes out some day or some night or a post-mortem version...

To me this is a deja vu:
- map unfinished or bugged
- map old
- no sign about fixing last 15 years
- HEY, don't touch the treasure because of... WHY ?
Reply: I don't touch it I can make a renamed-copy

. And then original will stay as it is until next century... Who cares ?

The Story: If in next 5 years UT will have a superior Editor capable to clean up craps which I did, I do not have anything against IMPROVING MY TRASH. Do I need writing this bigger ? No, just re-read what I said and save this post. If my 3072 MH map or other one will have a PERFECT or a 10 times better version I ORDER you to Do It, because I'll be the first using YOUR Edit not mine. My Target is quality not quantity.
As BTW, I made some MH map these days - and... amazingly I won't post it anywhere. Why ? Because Nobody is candidate to edit it into a Superior Level - because I had plans for an "auto morphing map" with an INI but I'm feeling exhausted, and then a new junk will sit in UT for ages. And then why would keep a lousy thing forever - the same MH static style when it would be great to have a dynamic map ? Definitely this it's not needed. You have changed your OS ? Why ? Then why the same maps if you are tempted at changes for better things ?
Top

. And then original will stay as it is until next century... Who cares ?

Why? Because the author has asked people not to, that's why. The map is Jeff Martin's intellectual property and no-one has an inherent right to copy, alter or otherwise modify it without permission, irrespective of other people's opinions on whether it is unfinished, old, bugged, etc, etc. Surely we should respect the author's wishes? There are plenty of maps out there where the author has explicitly stated that they don't care what other people do with their maps so have a look at some of those?

Let's just wait and see if there is a reply to EG's email to J.
Top

Exactly these are reasons making me To Not SHARE anything anymore here - because I can do the same with regard to my stuff... "that's why". More than that, modify what ? Stripped brushes ?

Never mind... I think I'll clean up all my Drive repositories and I'll edit my web-page accordingly, not today but in next days. My future packages might be stripped by codes as this map was stripped by brushes because I have to return somehow such habits in similar formula, "that's why"

. If all stuff in this game would be "protected" like that, I'm curious how many mods/maps would exist... UT community survived because of sharing not because of "do not modify" head butterflies. But... ignore me, keep moving... I know what I have to do next.
Top

My cybernetic lawyer will see you in court!

I get where you're coming from on this, and there are certainly other forums where it's less of a big deal to credit those who made stuff prior that one might alter... but it's a respectable thing to do.

Hell, when I started doing superhero edits from Chris Ollis' base skins it took me forever to get in touch with him and get his permission (most of the old school folks are unreachable nowadays) but eventually I did get ahold of the guy and he liked what I'd been doing with his stuff.

Likely better to be on good terms with the original author than have them find out you messed with their stuff and have that person mad at you. Could be a mobster and I don't feel like sleeping with the fishes over a game map.
http://unreal-games.livejournal.com/

I think it is silly, there must be a time limit such as like generic drugs. If a drug expires patent but an old game map never does.

Anyone can work on my stuff, but if I worked for a company and for a current game THEN I would say we must follow the rules.

Barbie does it right since I would want my (our) maps on a server, he links the original, but the map being played is far more nice for me (us) than letting it sit an no one even sees it.

Oh I am talking about copying FNB maps in 3012, because once I hit rebuild it's gonna take that long to build the damn things

Red_Fist wrote: ↑
Mon Apr 13, 2020 7:07 pm
Barbie does it right since I would want my (our) maps on a server, he links the original, but the map being played is far more nice for me (us) than letting it sit an no one even sees it.

Agree with that. The point though is that the map in question here is from an active website with an email contact so it is only proper to (try to) contact the author and seek permission before altering his map.

Ah, I see, I would also try to contact authors, but there is so much mappage out there, they should be thankful some one wants to mess with it, and leave the authors name in and as long as you are not taking credit for it.

What is ironic is he uses all these movies and brand names for his maps, did he ask for permission ?

A lot of those seem like they would be good for MH maps.
Binary Space Partitioning
Top

Good point but you don't want to go there

Superman and Batman skins? WoT textures? The StarWars map series? Models and weapons ported from other games? Voicepacks from movies and TV series? and so on and so on.
Top
Post Reply
44 posts