Tutorials and discussions about Mapping - Introduce your own ones!
Post Reply
20 posts

Blue Team is in the DC comics Hall of Justice that the "Super Friends" used in their cartoon, and has recently popped up again on the television show "The Flash".

Red Team are not in the Legion of Doom's HQ so much as it looks like someone turned Doctor Doom into a base.

I kinda wanna do several things to this map, but I need good bot-pathing setup, any takers?

Among other things, I wanna take the LCARS setup that FragNBrag has used on a number of his maps to update the look of the systems inside the Blue Base... and something or other to the Red Base. The level of detail inside both bases is down to Unreal1 levels and could use some serious upgrading.

So anybody up to pathing this? Link up top in case you missed it.

Actually, path this one too:
https://unrealarchive.org/maps/unreal-t ... b714c.html
Those "garages" on either side would make a great place to park Ferali's tanks, for more interesting gameplay. 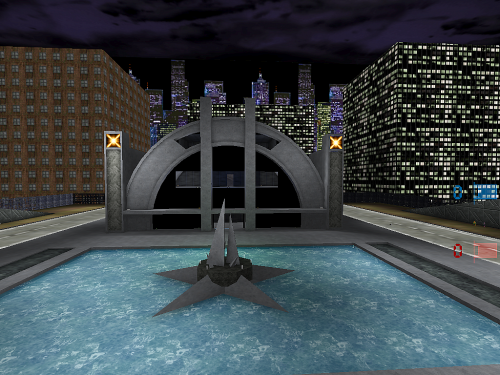 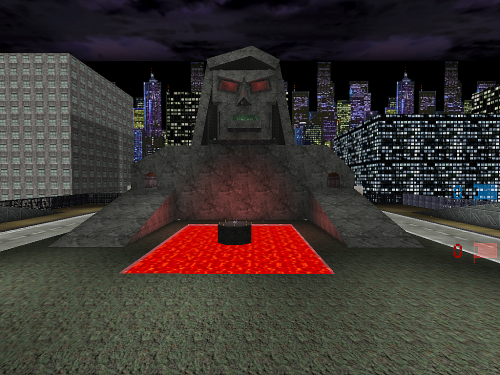 man, that's one fugly map. Keep in mind the star trek panels that fragnbrag "used" in his maps were either composited or created art from various star trek media sources (using samples from the lcars web sites, extracts altered from ds9 fallen, elite force 1 and elite force 2). There were a few other mappers before me that ganked the original ds9 panels and used them in their maps or sp campaigns. I was warned about IP's and so made sure to create 30% differences. As with many others, you my permission to use the LCARS graphics from my maps

Lol...
Both FlagBase Nav.Points have no incoming path, thanks God have beacons making them MORE UnReachable as possible.
I added another ReachTest feature in Mr. Garbage. Now you gave me the testing terrain - Thank you.

The quick fix would be the toy for UGold227. Just adding two damn needed reachSpecs and... perhaps a few extra paths.

Lemme guess: He did PathNodes bigger in drawscale for being seen by Bots ?

Myths, man, full myths. Paths have to be navigable with reachSpecs, if they have data, even a blind rat can be guided by UE1, here is Engine and nothing else...
Watch the comedy show with the two comedy actors XC_EditorAdds and Mr. Garbage. FlagBase from image definitely has no incoming path. Bigger PathNodes ? A waste of time. 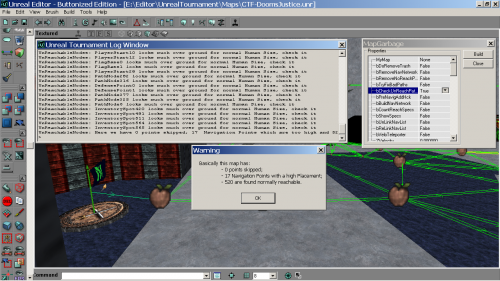 May I love this map a bit ?
Top

Didn't you ask some 8 years back or so? Plenty of time to learn the editor.

Here's a small tutorial to cover the basics.
Reminiscence - My map collection
My Moddb profile
Top

A lot of the older maps made for the game were pretty damned fugly before people got their shit together and did better.

FraGnBraG wrote: ↑
Sun May 10, 2020 3:34 am
Keep in mind the star trek panels that fragnbrag "used" in his maps were either composited or created art from various star trek media sources (using samples from the lcars web sites, extracts altered from ds9 fallen, elite force 1 and elite force 2). There were a few other mappers before me that ganked the original ds9 panels and used them in their maps or sp campaigns.

I know of many MANY maps like this, so you're welcome... happy to help.

Dude, get a room!

Sure, but who has the time? I work for a living and once upon a day gone by I had something of a social life.

@EG
I don't know if Teleporters won't crash Plain Engine, I got some paths, added smarter AlternatePaths, working with 2047 reachSpecs.
All it needs is some solid testing, I disconnected all Deadly Jeronimo type jumps which XC was doing and I added a few missing routes. Technically I'm inside Engine over here. Are you interested to try it ?
Top

EvilGrins wrote: ↑
Sun May 10, 2020 8:20 am
A lot of the older maps made for the game were pretty damned fugly before people got their shit together and did better.

It's a map very much of its time - large scale externally and within the buildings, very open and with the limited textures then available. The design concept is interesting but the layout isn't - it lacks any circuitous or semi-hidden routes to the flags and it looks like much of the area between the bases can be easily dominated by a couple of good snipers. So it lends itself to a particular form of CTF gameplay.

If there are going to be alternative routes then it might be an idea to path one beyond the footbridges where bots would be largely hidden for much of the route from base to base (I get the impression from the readmes that the map was largely intended for human players rather than bots). [I won't raise the issue of permissions again but his website address in the readmes resolves to his F*cebook page].

One thing I have noticed is that one base has damaging lava in front of it whilst the other just has water which does no damage - this is somewhat unbalanced.
Top

Exactly these types of maps are not a big deal in balancing... I have a toy for switching bases at certain time interval, it's... entertaining when guardian gets turned into carrier...
By switching bases each team will have chance to play in both types of locations - unless map is very miss-balanced... all happening server-side...
Top

Not to go all Field of Dreams but if you edit it, I will test it.

OjitroC wrote: ↑
Sun May 10, 2020 1:36 pm
One thing I have noticed is that one base has damaging lava in front of it whilst the other just has water which does no damage - this is somewhat unbalanced.

Think that's less about balance and more a perceived perception of Good vs Evil.

On the link I placed higher up, there's this raised ramp on both the left and right which provides some protection to get across without getting shot. Either running on top of it or alongside it. That's the path the bots most often currently go.
http://unreal-games.livejournal.com/

Sure, but who has the time? I work for a living and once upon a day gone by I had something of a social life.

First, that social life thing was a lie ...bots or Skaarj doesn't count.

Second, the same statement count for the others as well. Who has the time to path (fix) a fugly map.

It's solved, EG has it. Using manual reachSpecs handling... and taking control over automatic blind script paths generator with Scout - any. Now I was The Scout in there...

Tinkering with it now and again while playing it...

Wanna take a shot at updating it? Make a better map based on the same theme??

Realistically the Hall of Justice should be on the opposite side of the Hall of Doom · https://dc.fandom.com/wiki/Hall_of_Doom
http://unreal-games.livejournal.com/

· Swapped a generic symbol in both bases with team oriented ones, a "Justice League" logo for the Hall of Justice and a "Doctor Doom" symbol in the Doom base.
· Added another set of UTDMT & UTDMW to both bases, good guys get Warlords & bad guys get Titans.
· Warlord and Titan in the bases are now larger so they can't get outside, although the ones outside occasionally get inside.
· Despite it being a Marvel vs DC theme, I've been naming Titans and Warlords with DC character names. 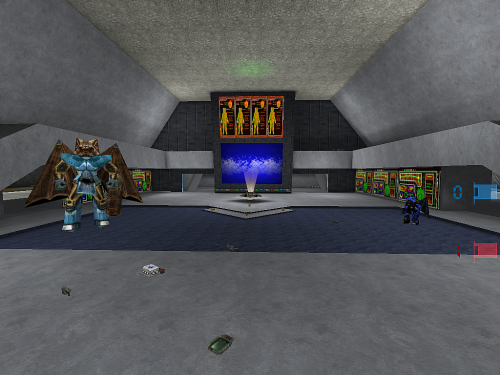 Because what UTDMW & UTDMT say can be configured, while I'm leaving the Titans saying what they normally say, as on this map they're on the villains' side, I'm configuring the Warlords near and in the Hall of Justice to speak like campy superheroes.

Picture how Batman & Robin spoke on that 1966 TV series.
http://unreal-games.livejournal.com/

Updated shot, not entirely happy with the fountain but I can't find a really good metallic yellow for it. 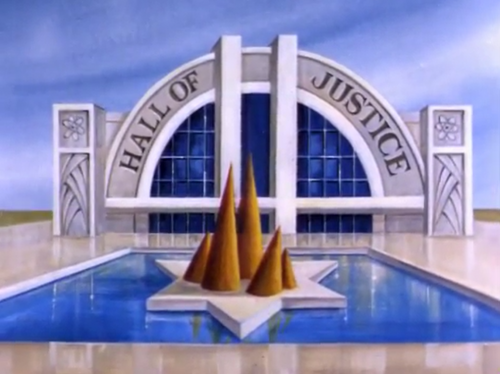 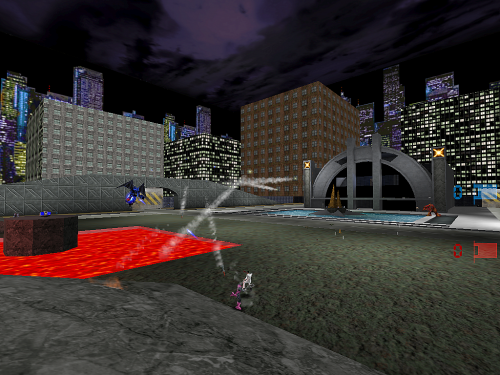