Some of my curiosity

Tutorials and discussions about Mapping - Introduce your own ones!
Post Reply
10 posts • Page 1 of 1

Some of my curiosity

After trying to get rid of a few flickering spots in whatever map I got "results", HOMS at warps. I aligned those miss-aligned portals, I reset textures alignment too, and still some HOM was pissing me off. I went to check texture properties for such a Warp portal. I saw HighShadowDetail box checked or some of those things... And... My question:
Does any of you knows a good reason to put all sort of texture properties to a portal which is HIDDEN in all ways ? (CTF-((Apo))ARC_PlaTIDUS in stage)
Why I'm asking ? Because after removing all those stupid alignments and extra super duper "Detail" properties for a texture INVISIBLE, the warp zone started to work perfectly, no HOMS, No BSP problems, just a great Warp.
What are for these corrections for a texture which doesn't have to be seen in run-time ? Anti-cheat support, cheat support ? Please, light my tiny brain.
Top

Short answer: No. There is no reason you'd want to alter texture properties on something that is rendered invisible.
Reminiscence - My map collection
My Moddb profile
Top

Surface properties (invisible or not) affect warp zone portals, a proof of this can be found by flipping the texture.
"Your stuff is known to be buggy and unfinished/not properly tested"
Top

Well I hope you discovered something, I had a big fight with those warps a few times.
Binary Space Partitioning
Top

In other hand I was jealous how nice are these aligned in big parts - only a few small deviations, but two warps have made me mad a bit. One of them (portal) was in line with some extruded brush - a part of it, other had a funky pivot 191.999780 or such instead of 192.000000 - aligning worked. The last one doing HOM has whatever-ShadowDetail box checked - I unchecked box and removing alignment, leaving it original - worked. While texture is portal and hidden I don't see why wasting time to screw them up like that. Then, as mapper I can change brushes for not supporting a future build without to mess up BSP tree - I take this as a measure against future editing... perhaps stripping brushes it's more helpful or using methods a la... coop with craps instead of brushes, placed randomly over final build. Or perhaps it wasn't on purpose to protect map against future edits.

Next: If you ask me about some common "RANT". Let me see:
- annoying sounds for any player hitting any kicker in any Base - to me it looks like a jerky setup making me to mute game or turning off speakers;
- 0.2 logic at inventories for a map intended for normal CTF - a normal CTF needs NORMAL setup and weapons not only one ammo type and redeemers;
- zero paths at lifts - not all of them need paths I have to admit...;
- perhaps it does a funky thing if a flag goes down in water and warping... and warping back, and so on until it's returned by itself - a waste of time;
- PlayerStart-s causing less reachable routes and... a lot of paths that are not needed nearby Other paths.

Given said instances found here and in other map (which I was editing - paths fixing) I wrote another feature in "Garbage-Lord":
- Replacing an Inventory from map - aiming maps with paths tweaked (where it's not recommended any rebuild) and connecting newer inventory exactly in place and marked as it was the original;
- Putting down stupid lights boosted at maximum values 255 Brightness and 255 Radius. If a value goes over X then it will be changed at another defined Y - lower, all in the same time in less than a second.
These are coming out after doing more other tests.

Edit: Subject - Next thingy
LevelInfo does look like is hosting (image from here) 3 Linked lists - two are empty even if map has monsters because PawnList is created in run-time and also SpawnNotify is None here. 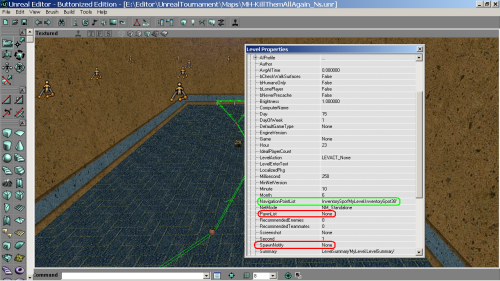 My question is: Then why do we need other data like NavigationPointlist because these can be mapped in run-time too. If map is sitting unused on Hard-drive can be simple - empty - nobody is navigating on a map sitting in a folder from whatever computer. When a server/game loads it for players, we can generate this linked list in a few milliseconds, it's not needed to be there hard-coded as usual. Actor connector I think can be even smaller than the number of total bytes generated by this list when it's a big one, actor also might have code stripped and only 1 line explaining the purpose of this actor placed in map and scheduled for auto-destruction at end of task. Can we do smaller maps than a small map then ? Maybe yes. What do you think about this ?
Last edited by sektor2111 on Mon Jun 15, 2020 10:57 pm, edited 3 times in total.
Top

Surface properties (invisible or not) affect warp zone portals, a proof of this can be found by flipping the texture.

Only texture orientation affects warpzones as it is used to define the way the two sides of the warp are connected. All surface flags (apart from Portal) and the texture itself are useless.
You must construct additional pylons.
Top

So it doesn't worth making "settings" as long as texture is never seen in run-time.

Thanks so far.
Top

This discussion seems weird. In my experience, texture means nothing, it is the position/rotation/orientation of the sheet BRUSH that determines whether the two portal zones will correctly "match" (i.e. work properly). It is only the portal flag. I usually set the surface unlit although this likely does nothing. I just use an ammocount texture (plain green or red) for zone portal, but any texture will do because texture does not matter.

To create warpzones, do your csg work, make sure the mating portal "box" or "shape" both match, add new sheets. Transform them permantently if you like. Add the wz actors and build. Run the map - If any portals are blocked (black or glitching out) then reverse/flip one of the two portal sheets - do not transform after you flip it. rebuild and voila portal will usually work. If not then flip the other sheet instead. This has always worked for me. Many of my maps have wz portals in them and they all work.

Okay, I hope that this discussion was constructive for other readers too.

As for causing a linked list in run-time, if ALL UT versions are not having issues, UT469 OFF-Line (not tested ON-Line yet - perhaps it doesn't worth) does a funky crash at "FindPlayerStart" and ONLY 469. Maybe it has another "fix"... And... it's not an one time crash when game was crashing at "server-travel" (was a local game) to the same map - trying to play/test maps multiple times... but this is another chapter to discuss even it was another curiosity of me.
Top
Post Reply
10 posts • Page 1 of 1