Tutorials and discussions about Mapping - Introduce your own ones!
28 posts

Mind if I edit this a smidge?
http://unreal-games.livejournal.com/

Sektor can probably answer this better but the readme says "Similar to command Paths Define used for Constructing Paths Net using current PathNodes." So it looks like you need to have pathnodes in there - I think it does the path network reachspecs rather than actually placing nodes.


[NBK]DxTrEm3Fx wrote: ↑
Wed Jan 13, 2021 10:20 pm
Also, I used bScanTeamStarts and bScanCTFAltPaths and now I cannot figure out how to get rid of the replacement textures that MG assigns to the player starts and alt path icons.

After doing those two and without saving or closing the map, with bScanTeamStarts=True and bScanCTFAltPaths=True, hit Build again and the textures are toggled off.
Top

Sektor can probably answer this better but the readme says "Similar to command Paths Define used for Constructing Paths Net using current PathNodes." So it looks like you need to have path nodes in there - I think it does the path network reachspecs rather than actually placing nodes.


[NBK]DxTrEm3Fx wrote: ↑
Wed Jan 13, 2021 10:20 pm
Also, I used bScanTeamStarts and bScanCTFAltPaths and now I cannot figure out how to get rid of the replacement textures that MG assigns to the player starts and alt path icons.

After doing those two and without saving or closing the map, with bScanTeamStarts=True and bScanCTFAltPaths=True, hit Build again and the textures are toggled off.

Thanks for the info on the textures. I re-added a minimal amount of path nodes. Now the BOTs are very lack luster and not excited about anything. Before they didn't sit around and staring at the walls waiting for a stimulus check. They were go-getters and playing the map. Now there just no inspiration for them to do anything. Now they won't even use the transloc destinations or ambush points or alt paths. I have fixed all of these issues,
There's a few lights in the void plus
VoidCheck: MedBox0 looks placed into void.
VoidCheck: MedBox5 looks placed into void.

I do not mind.

"Thanks for the info on the textures. I re-added a minimal amount of path nodes. Now the BOTs are very lack luster and not excited about anything"

Is what it is.

I had a very small area, the bottom hallway of Liandri ,up top in the editor,The bots very difficult but for odd reasoning. No matter how much I enticed them they seem to ignore the area. so I added ammo, however, when you add ammo it would not be one path because you add 2 or 3 ammo.

That in itself by default created more paths, and ,,before you enter that bottom hallway added some nodes and ammo. They all the sudden FINALLY went down there.

Yes, and AlternatePaths are the answer in CTF.
Top

Hey EvilGrins,
Did you get a chance to mess with it? If you did, please send me the version of the map so I can check it out. I have been working on the bot pathing. I think I have it where I want it. It might not fit what you guys like for MH or the other game types you play. But I think it's working well for CTF.

So I added a couple things, and noted some differences from the version I had previously with more lighting... other than the lighting.

1 of the things I added, to each base, was a team cannon: 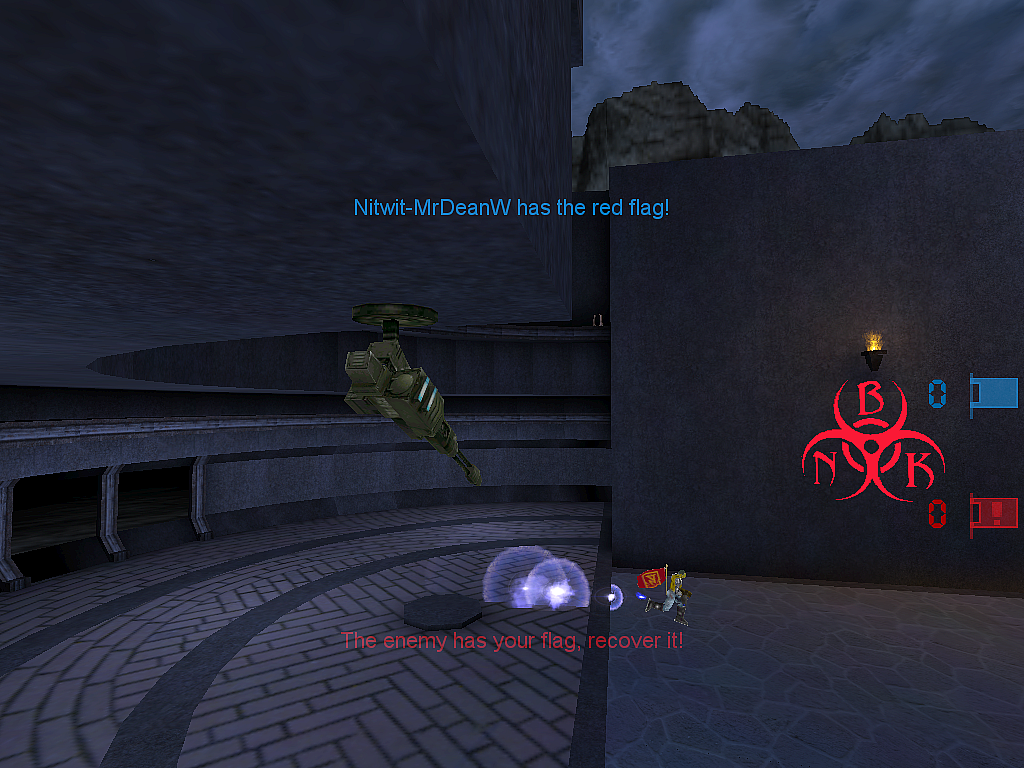 On the previous version if a player got caught under a lift it just passed through them, but there's a difference here that if a players now stays under a lift... 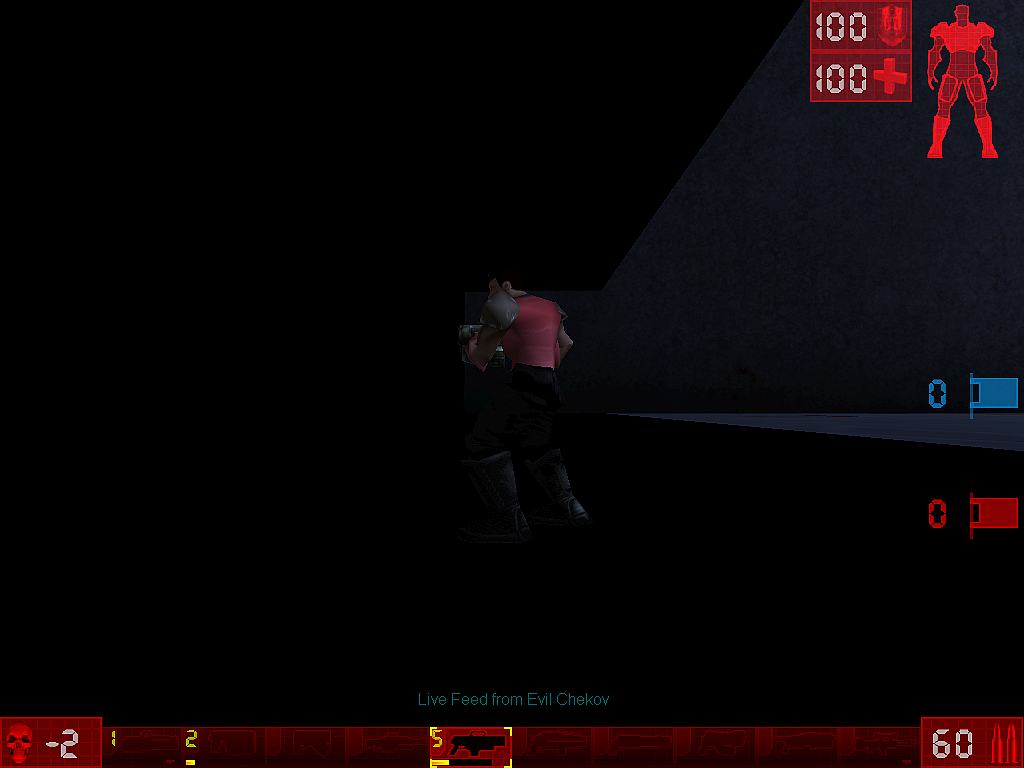 ...it kills them when it comes back down. 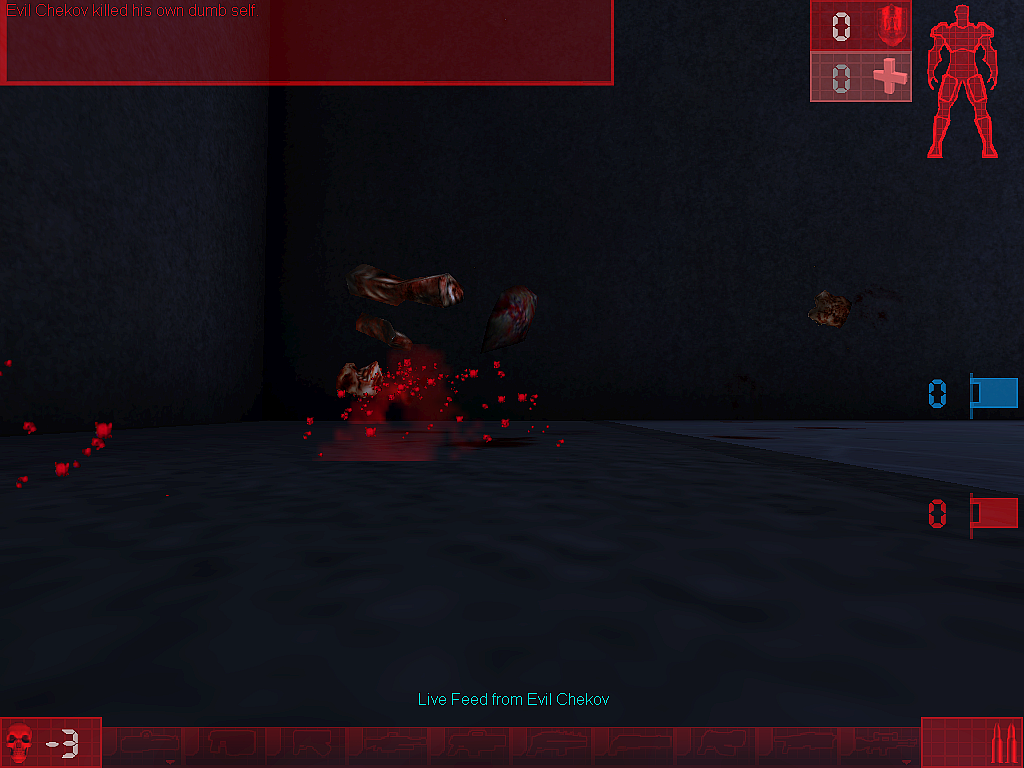 Current pathing has the bots stay under the lifts and constantly getting crushed.
Last edited by EvilGrins on Sat Jan 16, 2021 9:50 am, edited 1 time in total.
http://unreal-games.livejournal.com/

Lifts have wrong Tags or Combos must be adjusted because they don't match - ElevatorMover4 and ElevatorMover6 and... they are doors/buttons not lifts.

That's simple but... I have a question with regard to NBK logo. How is this texture supposed to be ? D3D vs D3D9 (which is a more fixed driver) are... different.

This D3D?
NBK_Logo_1.png
Or this D3D9 similar with OpenGL ? (Of course for me OpenGL is getting scared at a random causing a frozen game)
NBK_Logo_2.png
If texture has the right parameters, 227 won't mess them up, but here something is not okay as long as they are not rendered in the same way by two renders.

Why I'm asking ? I see your game screenshoots different from map's screenshots - so to speak screenshot textures from LevelInfo are different from images posted, and even D3D game shows funky stuff:
WhichOnes.PNG

Clearly you don't get these.
bRemoveNavNetwork means navigation network aka reachSpecs and internal links from Navigation Actors and NOT PATHNODES or Navigation Actors themselves. Navigation Network means their navigation data and links not actors causing existence of links - You NEED to see Paths in Editor's ViewPort for figuring what builder does vs what it doesn't do because Builder Is Not Mapper, more than that, it logs what it just did and you should see/look at the log.
bBuildNavNetwork means creating reachspecs and it sends command "Paths Define" - this won't add PathNodes because builder doesn't have EYES to see where are these needed to be placed - I'm not even bother to do a "cyber eye" - it will fail by default exactly like EPIC devs because it cannot really see Polygons and Floors in Uscript or it would need crusher iterations which doesn't worth wasting time.

Replacement textures - during PlayerStart/AlternatePaths checks - are reverted to default at the second builder hit/click with the same option to True or else... in other hand you don't need to save map with textures changed, LOL - I recommend R.T.F.M. in page 7/17 ALL FIELD from bScanDefences explains it, textures are toggled just for figuring placement in order to gain BALANCE, these options with Texture toggling are working in the same way for similar checks.

MapGarbage_11_2020.pdf wrote: Option will assign some textures
visible to these actors for being well visible. By
using this option again, they are reverted back to
default texture.
Update September 2020
We have logs for all team colors – 4 teams but
textures are toggled only for two teams.

By example PlayerStart27 which is RED in initial release was placed in Blue Base - Spawn killing or Advantage for getting flag ?
StartLulu.PNG
You need logic here and operating PC skills not programing or coding knowledge - Stage:
I'm checking AlternatePaths - only AlternatePaths. Push button - textures are pointing them. Okay, and then ? Then we have TWO options:
- REOPENING MAP for being edited as it was - for adjusting wrong things with original textures in original map as it was before first open;
or
- hitting the checker AGAIN for reverting back textures, and then doing wanted/needed changes having all in stock format.
MapGarbage might have a bunch of options more or less described based on mapper's operation mode. If these checks are too complex this way light me about how to make them more simple for being visible - which team is where.

Excuse me but I'm not aware about something more simple with regard to these checks - I think location coordinates in X Y Z data won't help anybody, seriously...
You do not have the required permissions to view the files attached to this post.
Top

Hello EvilGrins,
I have gone through all of the movers and re-built all of them to make sure that were actual ElevatorMovers and not just a mover. 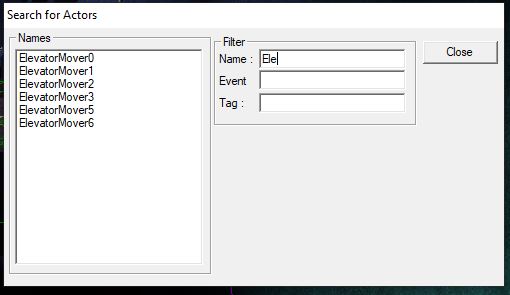 I've given all of the movers a name in the Events Tag = ElevatorMover2 matching the respective mover. 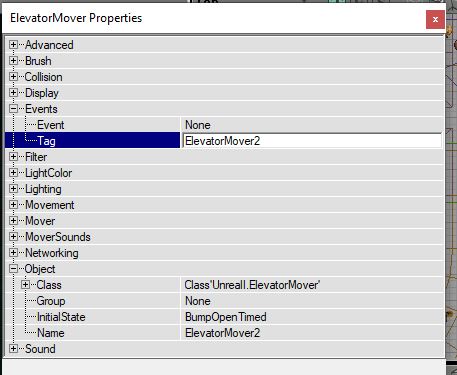 The LiftCenters and LiftExits Events Tag match their respective mover = ElevatorMover2.I have a LiftExit placed before the Elevator where you get on. I have the LiftCenter in the center of the Lift at the bottom and a LifExit a the top where you should get off of the Elevator. 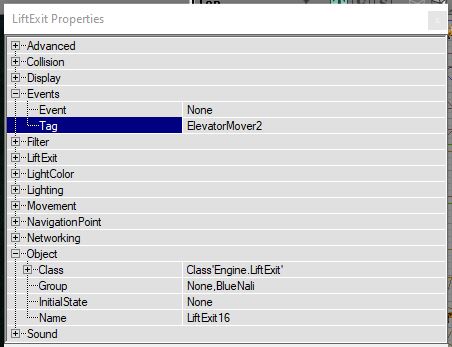 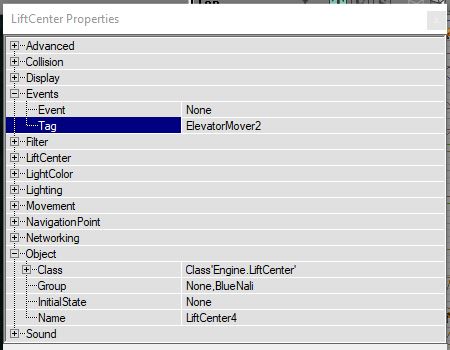 I have watched a couple of videos on youtube to refamiliarize myself with the correct process for setting up movers. I have updated all of the movers to ME_IgnoreWhenEncroached, MV_GlideByTime, BT_PlayerBump. I have gone into other CTF maps to see how they have the elevators set up and one thing I see different. When I select the LiftCenter and LiftExit they have a red arrow that you can rotate 360°. My LiftCenters and LiftExits do not have this and I'm not sure why?
This image is from the map CTF-Cybrosis][. It's showing the two LiftExits and the LiftCenter in the middle.

Another issue is only one of the 6 movers shows the actual texture on the mover while stationary. The rest of them are black in the game until you get on the elevator and it moves. 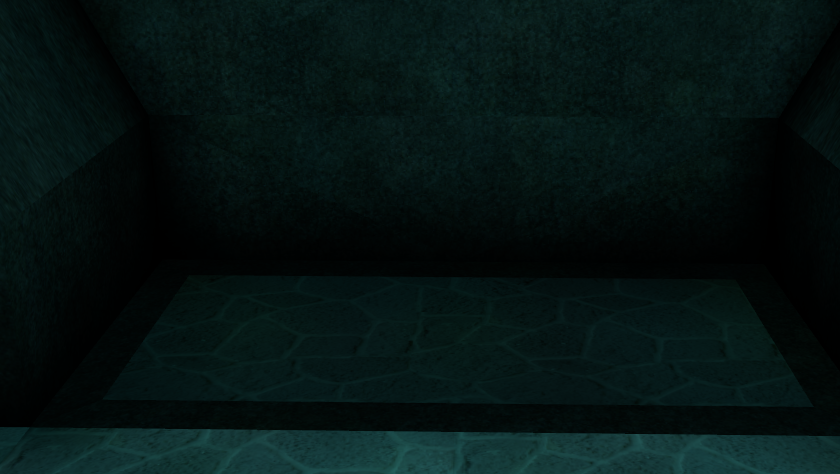 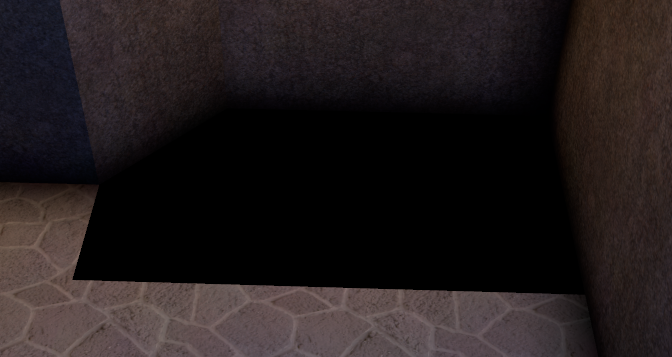 Last time when I touched a random map, lighting was better builded after removing all lights sitting in void. Then...
- Editor from version 451b at least it's better at lightning than 436 not for editing but... for building map;
- whatever 469 also has another lightning deal;
If surface under a mover-lift needs to be visible, said Mover-Lift have to be buried into void or moved elsewhere until lightning is being build and moved back after build. This will prevent Mover from shadowing surface (this is what I tested) - also you can try set bDynamicLightMover True to see if it's helpful.

After touching this Level I got:
- All Logos are the same in any render - properly masked not only for plain D3D;
- 1266 reachSpecs -> 11 + 11 AlternatePaths, 48 PlayerStarts active and inactive - toggling in time, FlagBases are back in location (must be normally reachable) and pre-pivoted for being like in original - manually doing, removing and editing a couple of reachspecs (some paths were small/Red but roaming spot was big - lol XC builder... )

Original rammed D3D render driver do seems operational, no crashes have been encountered so far...
If you want to see it I'll send you a sample in PM...
Top

sektor2111
Please send map in PM. I have already sent you a PM.

That must be down to the renderer you use because in 436 with OpenGL and in 469b with D3D9 they all show up fine when stationary (and when moving, of course). Paradoxically, the masked logos don't show up correctly with those renderers as sektor has pointed out.
Top
28 posts