Tutorials and discussions about Mapping - Introduce your own ones!
38 posts

I got this map awhile back, it looked ideal for UTDMT but it also needed a lot of help. There were no weapons, no health, no armor, no nothing. Sorta got the impression it was intended for a specific weapons mutator, but none was specified... 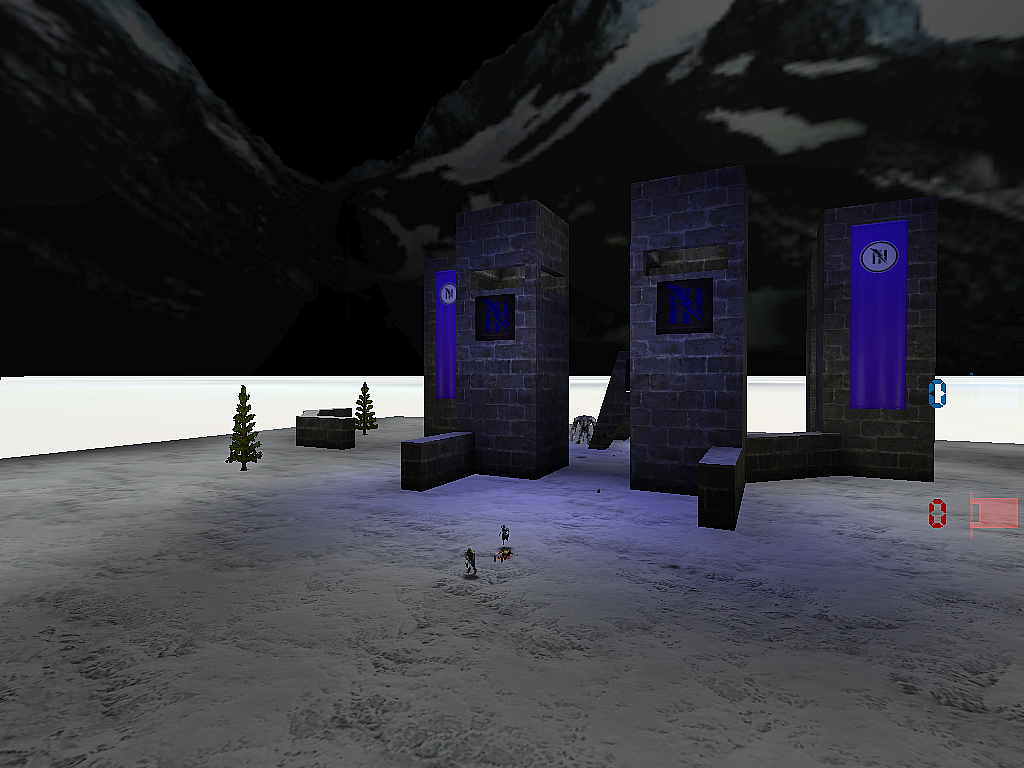 Also added a couple snow textures as what was there originally was kind of bland.

Nelsona pathed it for me, as what was there initially was not particularly great... which isn't that surprising. Not all mappers are appreciative of bots, which is why the never get invited to bots' birthday parties.

Now, Nelsona gave general pathing to the map but he edited an additional map with more specialized pathing.

2. CTF-UTDMT-Tundra-TitanPathed (was gonna shorten that to TP but wanted to avoid toilet paper jokes) has the same pathing as the other version but also pathing for the UTDMT.

Basically, the UTDMT walk a regular patrol along the back of the inside base. If someone takes the flag they do what they normally do, but provided they don't get killed they will walk all the way back to their own base...

...and resume their patrol.

That first map the UTDMT tend to wander after they initially start moving and there's no guarantee where they may wind up.

Including both versions, so players can go with whatever version they prefer.

What's the best UTDMT in your opinion? I want to open it up and take a look at it. Maybe build a UTDMT or an MH map.

Deja vu - there is already a map called MH-MrTitan or such even a "fixed" or v2 version, of course UTDMT was not fixed so far anywhere. Embedding bugged stuff in maps is far from my way of doing...
Top

I once thought a UTDMT in MH might be fun, as an obstacle that just keeps coming back in the middle of the path between respawn points and the end... but I was advised it's not a great idea.

There's really only 1 UTDMT.u, though there are variations as the fully named UnrealTournamentDeathmatchTitan.u also exists.

It was originally designed for U1 but I'm not sure if it was upgraded to ut99 or it's basically the same file.

Obviously there's the Warlord and SkaarjBerserker versions too.

I'm surprised you don't get the nasty HOMs when looking at the sides of the map from high up - I get this with OpenGL in 436 and with D3D9 in 469b.

On the map itself - as is not uncommon in CTF (and other) maps there is no way down from the sniper towers apart from jumping - a return teleporter would have been useful.

The UTDMT is subclassed from UnrealI.StoneTitan and has modified code - the UT99 version was orginally created for use as a 'Talking Titan' in DM-Titania][ (which is worth having a look at if one wants to see it in action in its original 'environment').

There are problems in using it more widely in DM, as sektor has alluded to. In addition, it spams the log with kill messages but these don't appear to have been implemented correctly so, when it's killed, the messages in the log indicate that it has also killed itself and, if there is another UTDMT in the map, that that Titan has killed it as well (this problem extends to the Warlord and SB as these merely copy the code from the UTDMT with few alterations) - so you get

I believe it was hunted "Accessed None"-s finalized by getting nothing, but leaving logs for others - with different words: some slave needs to finish my stupid code, here are a few logs if are helping.
What was escaped in my version was another amazing stuff calling a state from nowhere after the end of game. I'll deal with that another time, so far these pawns are just the same messed up copy in multiple formats any nothing is fixed - even comments are a copy-paste...
Else I don't get why a pawn would need logs when it kills something or it's getting killed. Other people were talking about something screwed at orders list menu when these pawns are used - definitely such a server will need a ServerActor as specified in some embedded documentation... but I'm not sure if it helps at something.

However, some of these maps are good for me after cleaning "Pawns" from them.
Top

You don't get any HOMs in the map then? That is odd - probably the first time I've come across that - for me the edges of the map just shift into layers, as it were - I've posted screenshots of what I get previously in another thread. It doesn't appear to be related to the renderer or UT version.

So looking at this map in the editor. Do you know what the intent for the large add brush at the top of the map is for? Does that help with optimizing the map or something? It's a weird intersected brush inside of the subtracted brush.

No idea, there's not much play-ability up there so I didn't pay attention to it.
http://unreal-games.livejournal.com/

Subject here was making some extra-pathing, something undone (light me about other maps with big monsters patrolling...) - geometry is not really touched.

As far as I know in my other personal works not edits, if you have a ledge facing SkyBox, surface which is floor for SkyBox might be flickering more or less depending on where SkyZone is placed on Z. I did not do a lot of research here, I was only trying in other maps to prevent player from seeing bottom of skybox just because I could figure these issues. I think here is needed other visible surface or such for making rendering different, I don't have too much other knowledge how to mitigate these rendering glitches.

I map which EG wanted to edit he asked me for some paths - even non-common extra-tweaking, geometry was not under discussions as a priority this is what was initial map as geometry aspect.
Top

[NBK]DxTrEm3Fx wrote: ↑
Wed Jan 27, 2021 1:28 am
So looking at this map in the editor. Do you know what the intent for the large add brush at the top of the map is for? Does that help with optimizing the map or something? It's a weird intersected brush inside of the subtracted brush.

Can't help you with that - but I was wondering what you see when you are in the map and go to the edge of the map - I just see black and sliding textures. There is something odd about the skybox as it has two textures - the snow covered mountains at the top, which show up OK, and brown hills/mountains at the bottom, which don't show up in the map.
Top

I will check it out once I get finished with work. I remember you saying you had issues with HOM, or black sliding textures. The BSP I saw in the map was pretty generic in the way the original mapper intersected brushes.

The original mapper wanted to keep the ground on the same plane as the map so he placed the zone info in the Skybox in the center of the bottom of nonsolid brushes. The Zone info in the skybox is the camera that projects the fake backdrop. This is what is causing the HOM effect. If you adjust the zone info so it's not in the center it works fine. But the ground in the skybox lowers itself which I assume he didn't want to do. I have tried to change to semi-solid and solid nothing works. I still get the HOM. Check out the video:
https://youtu.be/K9ok5dVRnJg

That mapper tried to create an illusion of a much bigger map by setting the sky zone info on the ground ...that's sadly not how this works.

Higor made an actor for the skybox to simulate this.
I have to search that thread.
-=: http://jokercologne.deviantart.com/ :=-

That was like a "movable skyzone" if memory doesn't cheat me but I don't know if it helps in this contest, I believe I tested it once elsewhere and I quit.
To me is more simple to prevent bottom of SkyBox from being visible - it's SkyBox not HellBox after all...

As EG said, there isn't more action in that area and then... these HOM-s are not that disturbing, this bug is annoying anyway as long as map it's normal and nothing like a stunt.
Top
38 posts