Tutorials and discussions about Mapping - Introduce your own ones!
21 posts

You know what the fun part is? It's not that he simply didn't ask for my permission to convert my maps. He DID ask, and I denied it. Full message history:

So, if you don't mind, you can take the map and the video from Youtube down now.
Top

...that's gonna cause a wrinkle.

I technically had already done a basic review of the map before I realized that permissions to edit hadn't been granted, so I'm gonna trot those out even though this particular project likely will be nixed shortly.

1. When you start the map there's a visible MONSTER END in the starting room... 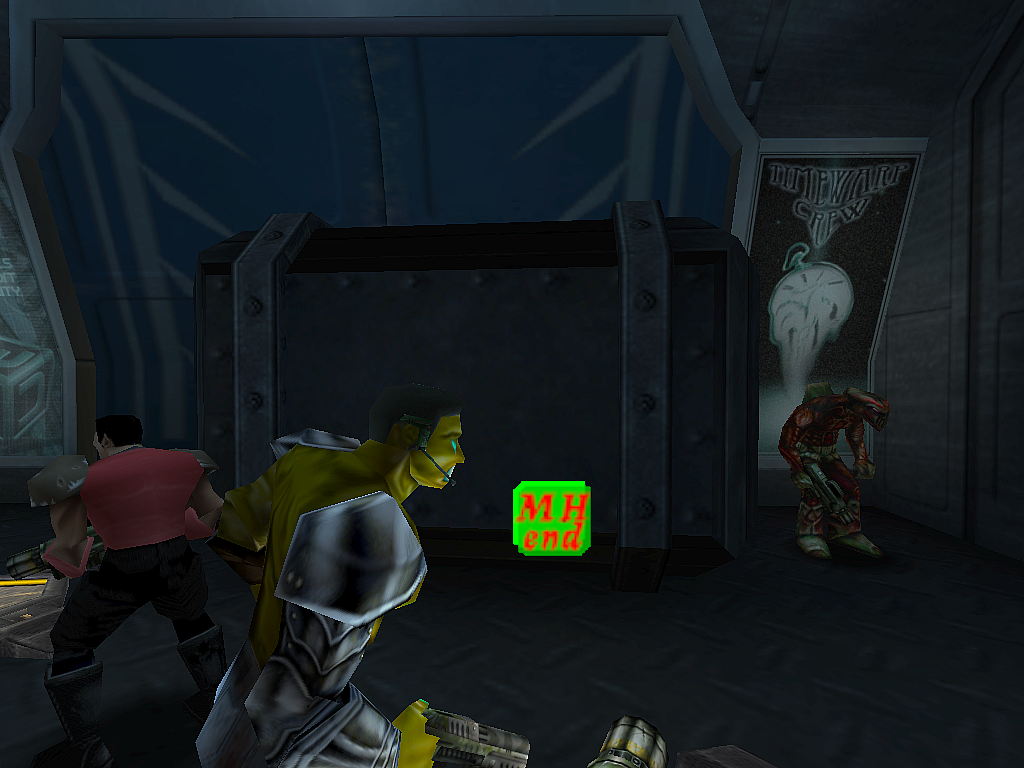 ...it's been awhile since I played the AS original version, but from what I recall you fight your way through the base and then eventually get back on the train, so I understand why that's there... but does it have to be visible?

2. Not everyone plays maps with the NO FIGHTING mutator that stops monsters from fighting each other... 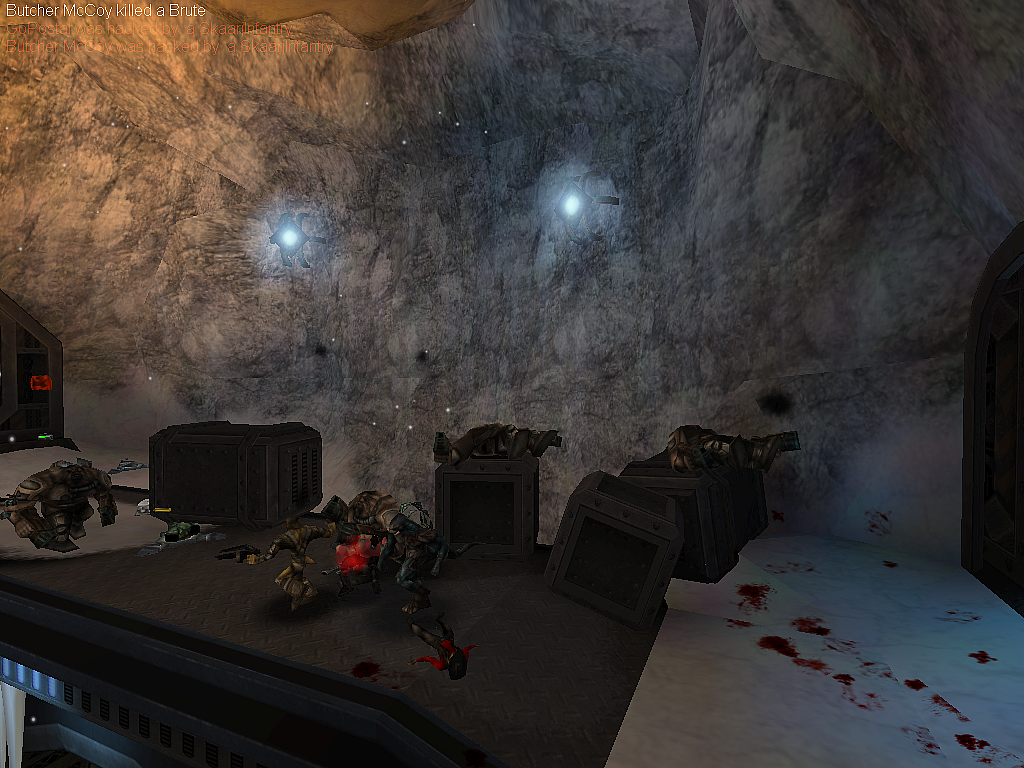 ...and that may be necessary here. Or, it might be better to put the Military Skaarj only in spots where they're on their own, because they kill any other monsters that can't pick up UT weapons... which causes difficulties.

3. Pathing isn't always the same between gametypes, which may be more of an issue when converting AS to MH than any other gametype... because AS has specific goals to be met, and if you don't do them you can't proceed further into the map.

On the AS original version, bots play the map fine... and I initially test most maps with bots: 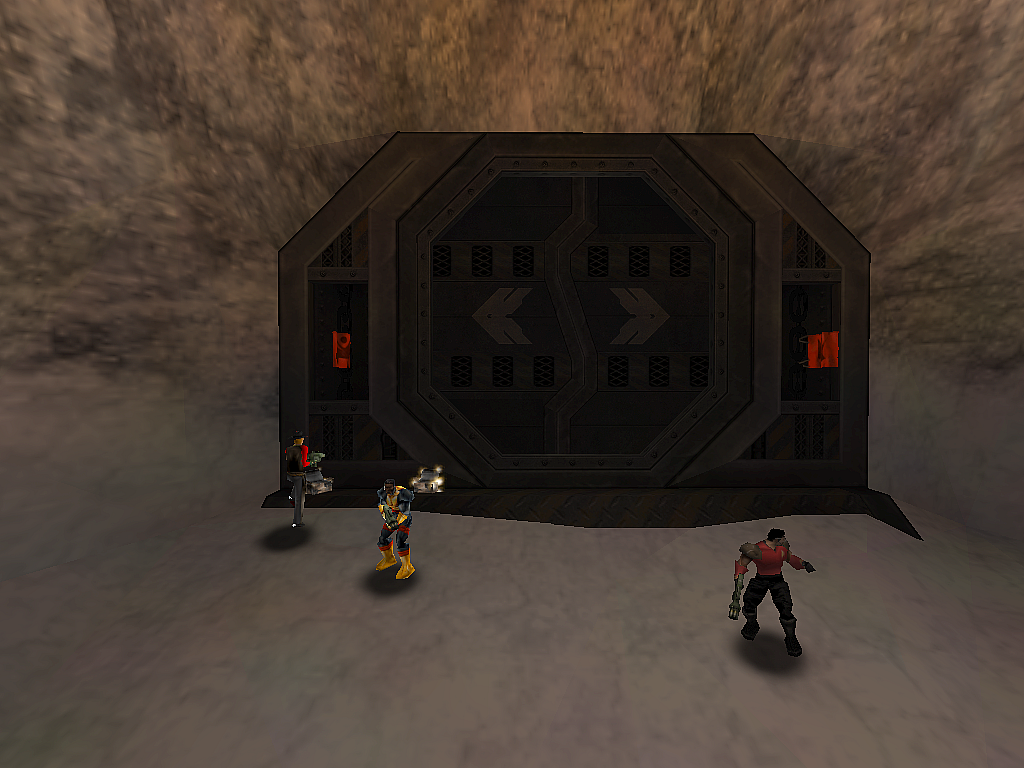 But the bots got stopped by the first major gate, as it didn't open.

Now, I don't know if they missed a trigger somewhere or one of the Military Skaarj killed a monster that a player needed to kill, but whatever the case the gate didn't open when they reached it. This is very early in the map, so I couldn't review further from that.
http://unreal-games.livejournal.com/

Thanks a lot EvilGrins for that, well, "enlightening" review.
See, that is EXACTLY the reason why I disallow conversions of my maps: Someone with appearently no idea what so ever about mapping just crams a bunch of random monsters into an existing map with an extremely complex pathing that was fine-tuned to function properly in Assault and in Assault only. No wonder, it doesn't work that way. Then he also makes some total rookie mistakes like visible Actors (WTF?), and without a second thought publishes the entire thing, leaving in the original Readme, which not only names me as the author but also - and that's the icing on the cake - states that conversions are not allowed.
With maps spreading around the internet like they do, there is a non-zero chance that someone stumbles over this thing without knowing the original, sees that it's unplayable, and thinks: "Well, who's the author of this? Revelation? Ok, apearently that dude sucks."
It's almost funny that he actually asked me "But why? Credits still point to you" - Yeah well, that's the problem. I don't want "credits" for a rip-off that doesn't even work!

And well, all that after explicitly being denied permission... Guess we don't really need to talk about that part a lot more.

Since the OP doesn't seem to take it down any time soon, may I kindly ask the next moderator who reads the topic to delete the attachment and the embedded video? Thanks in advance!
Top

Seriously, why do some people do this? It is so simple. The simplest thing actually. You want to use, edit, modify, alter someone elses hard work? Awesome, you ask for his permission. Did he say yes? Awesome, now you can go ahead. Did he only allow you to do this and that? Perfect, then you only do "this and that", and no more, unless you ask again and see if it is ok. Did he say no? Then no is no, and you stop right there. Why is it that this cannot be understood? Actions like these really bother me. This applies to any work, no matter how small, but when we are talking about one of the best UT maps ever made, a map so well done it does not need any more "tinkering", well...you do get a bitter feeling.

Removed the links. But also removed the PM exchange.


13. Please refrain from posting a PM in public. No matter from which forum.
We try to keep discussions and manners here civil.
If the message you have received is threatening or in any way indecent, please contact the staff crew.

Totally fine with that, thanks a lot!

- MH end visible because this is proper way for MonsterHunt. Players must know where end.

- Bots not able pass map alone because it not goal for MH. MH for ppl, not for bots. Bots can support ppl if this want, but bots never must do map alone. It is pointless.
For bot support ppl can be use some mutator allowed tele bots to player. When used such mutator, bots able support player on any map, even without paths at all. CoopTranslocator for example.

- Revelation ignore my question for months, but answer there in 1 hour.

- Yes, it is wrong, post map here after his deny.

- Video on youtube contain exact same footage as if it be taken from original map.

- totally unplayable over network. Network channels always overflowed to 1023. So weapons not visible, pickup not displayed, projectiles not visible and all other, related to overflow channels, bunch of errors.
There 804 bAlwaysRelevant Actors. Even one player on network respawn and got 1000 channels at first frames.

- Clock over network not work.

- Final cutscene, even if fix channels overflow, not work properly, because camera rotation not replicate for DT_Sprite.

- Map modify settings for render like set OneXBlending to true without any note for player. On some hardware this can cause issues. If you not finish map, original settings will not be restored.

- Some settings for render, map set and never restore. For example NoDynamicLights set to false.

The one thing you must understand, Buggie, is that the original author's wishes must be respected regardless of how broken the original work may be in your opinion.
If it's not your work, it's not up to you or anyone else to fix it, it's neither your duty nor necessarily your right.

Ignoring the mapper's wishes because you "feel" the map needs to be fixed is only going to affect you negatively on your standing in the community in general.
Keep that in mind.

It's one thing to work on maps that have been abandoned, for which you cannot contact the author, etc.
But in this case the author is still around, and he did set a ReadMe explicitly forbidding this sort of thing, so it must be respected, regardless of how better the map could have been in your own vision, since it's not your work.
Last edited by Feralidragon on Tue Oct 12, 2021 4:10 pm, edited 1 time in total.

Im feeling you are being ironic and raging against Rev due to denegation for permission he explained why he does not give permission. Normally author gives permission with not any problem (and with some condition), but if anyone says "No, due x x x ...", dude let it be, dont do anything with his map.
Top

Buggie, the issue is not that the map is "totally unplayable over network" or that "Revelation ignored question for months" or whatever...the big question is...did Revelation grant permission to modify the map? That is all that matters, I think.
Top

I did not ignore your original question, I answered that with an unmistakable "no". I ignored the following "why" question, because there's simply no reason to explain why I disallow it. My map, my rules, end of story.

No, it wasn't wrong to post it here, it was wrong to even open it up in the editor and change a single thing about it after I told you not to.

As for the rest, I don't care. I know my map is unplayable online. I released it in 2008, when noone would have even tried to play it online, because the performance alone would have ruined that experience. Plus, noone played Assault online anyways. I felt absolutely no need to do anything about network compatibilty, and I still don't.
Top

My map, my rules, end of story.

If I get this answer this topic not appear. Just for clarity.
Silence lead to appear this topic.

Yes this is wrong.