Tutorials and discussions about Mapping - Introduce your own ones!
30 posts

Story of this Map started in September 2021. more on that later..

Here is a pic of the map:

I will play this one often. I like everything, the jumppads, the pickup placements, the textures...and the bots play this one really well.

Okay, so as noted by others, it's beautiful. Great use of colors, as always, and the playable area is amazing. Lots to duck behind as you're running with the flag, and it's practically like the layout is a strategic defense. 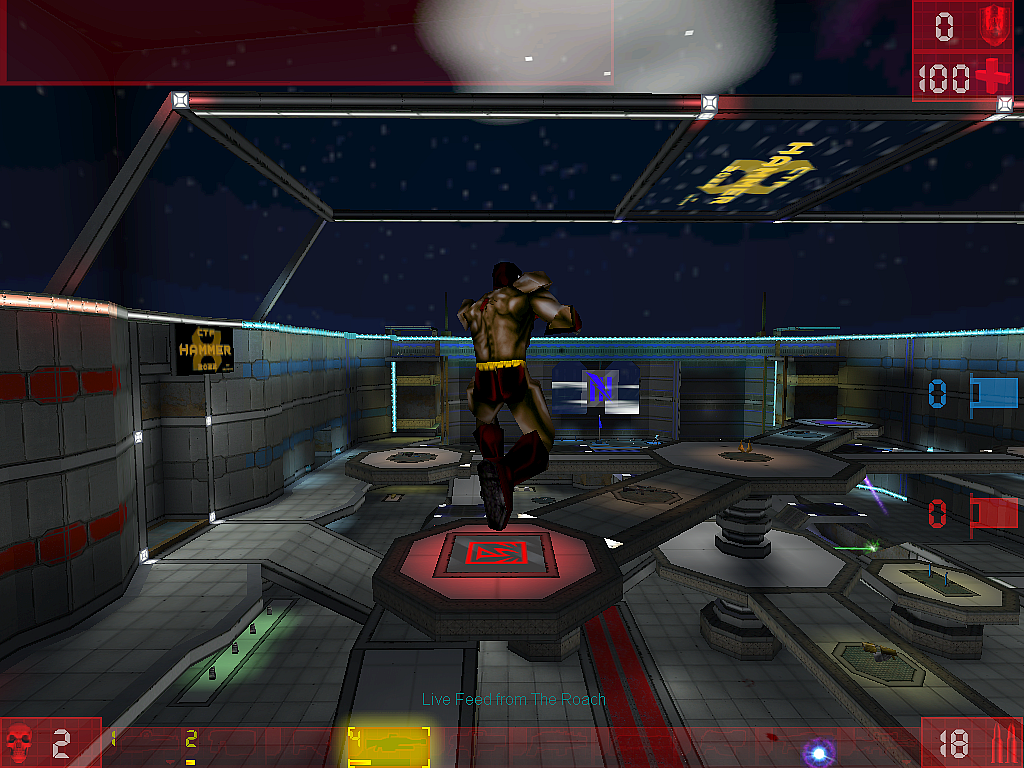 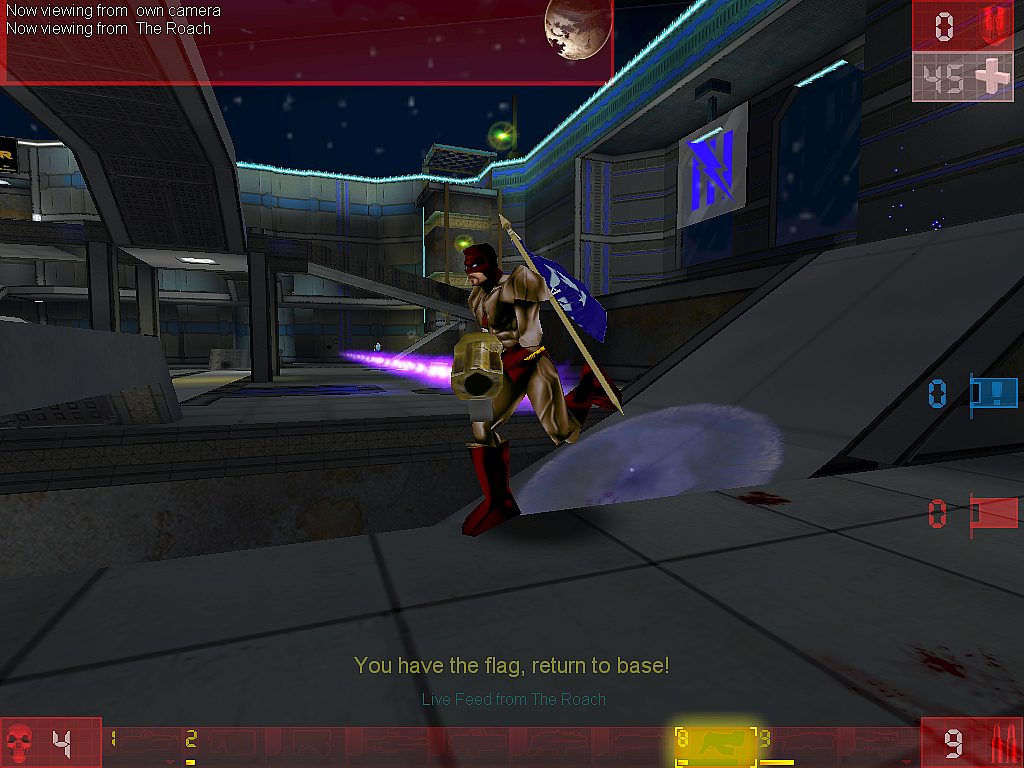 The playable area is beautiful, but the skybox is a bit boxy, You can literally see the corners and lines of that box, though were I not in spectator mode I'd probably been too busy playing to notice.

Spoiler
Show
The parts of the map nobody ever gets to look at... 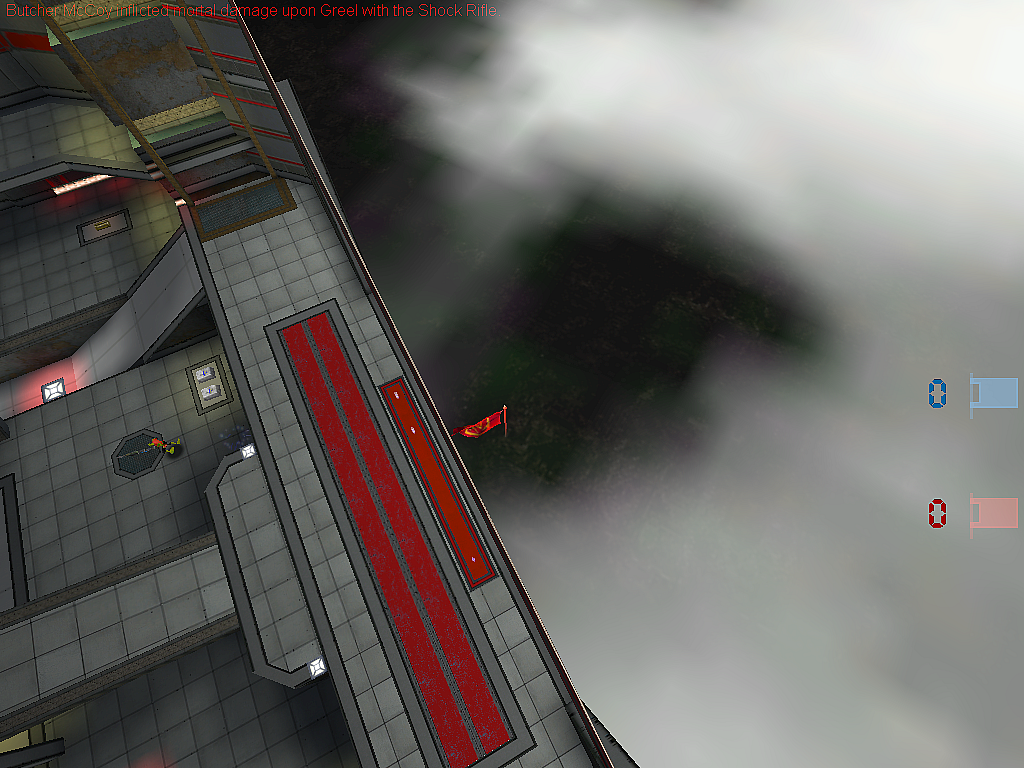 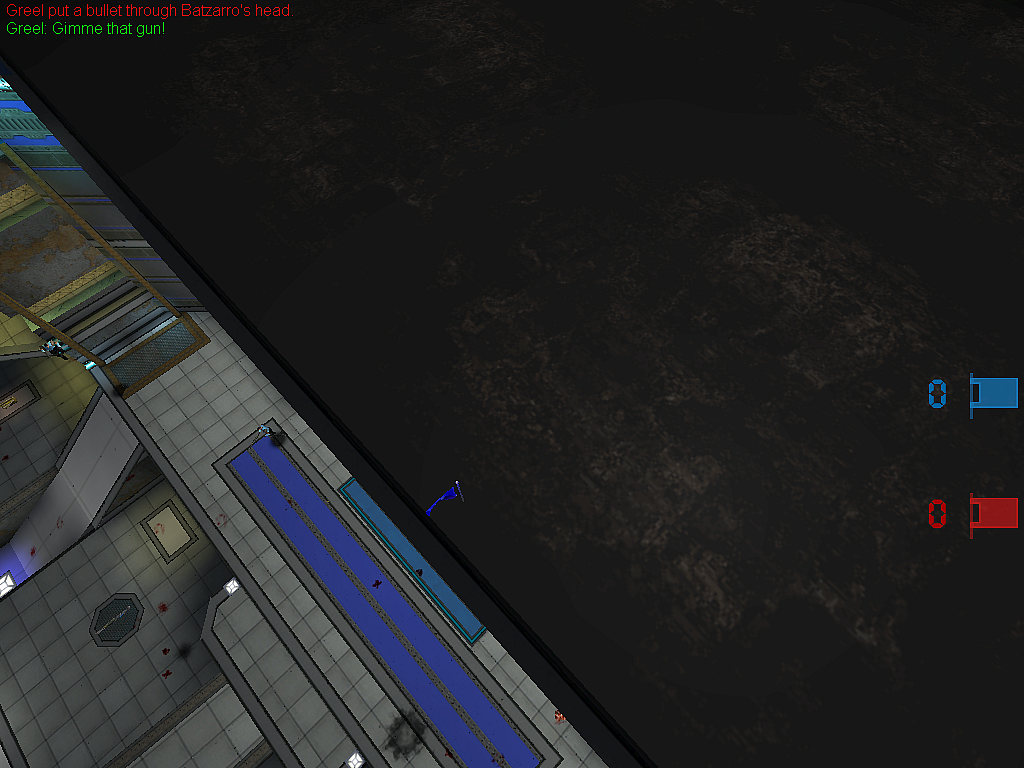 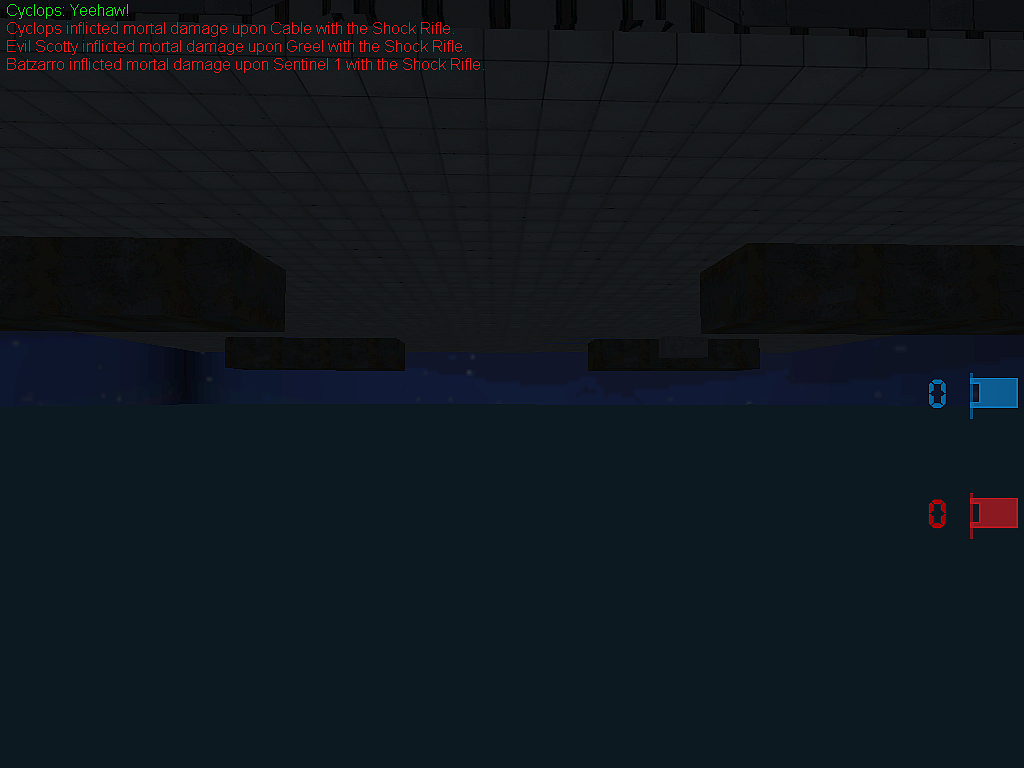 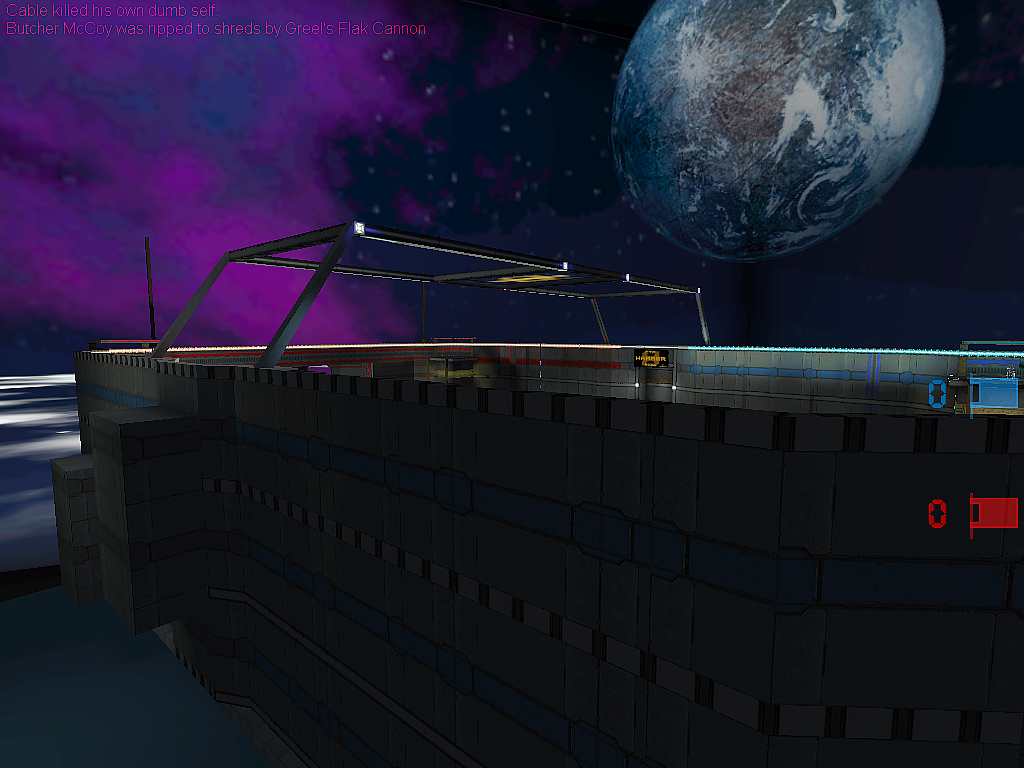 ...I have an odd fascination for maps where you can go beyond the boundaries of the play area. Often it's a fluke or something overlooked, though it can be a hazard as well. I've noted in previous reviews some maps have areas where you can get knocked into them but either the kill-zone isn't setup right or it wasn't that far of a fall, and if you don't know the "suicide command" you're stuck until the game is over.

This map you can go over the side on the left and right, and walk under the play area. Can't get over the sides lengthwise, but you can peek over and look down.
I ran this map with bots a few times, and noted something a bit wonky with the pathing, that someone with better pathing experience than I may need to take a look at. 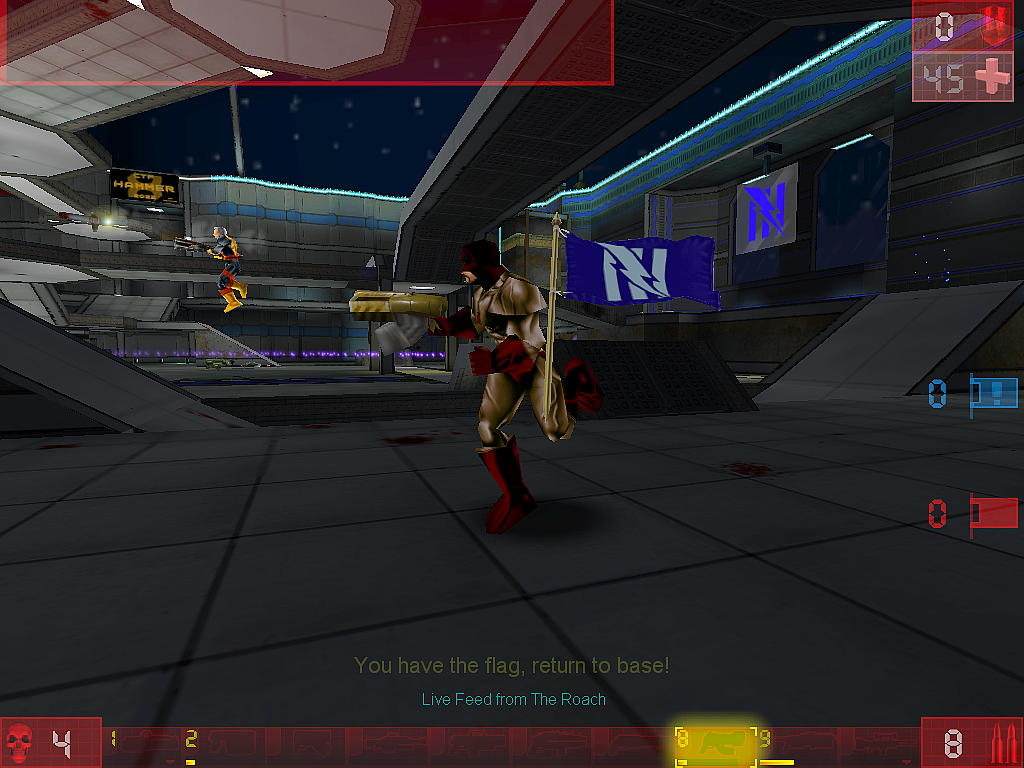 No team scored. My bots are a wide range of skills, from "kills you so well you don't know where the shooter was" to "couldn't hit you with a minigun if you were directly in front of them", so random bots thrown in and not a single team score raises an eyebrow. Now, I know why but I don't understand the how of that why.

1. Bot gets the flag.
2. Bot runs toward its base.
3. For no apparent reason, bot turns around and runs back to the enemy base.
4. Bot fights enemies, and then runs back to its base again...

...problem is that, depending how much damage bot gets from that initial run-back-to-the-enemy-base, even when it does eventually head back to its own base it might not have enough health left to get there as it would have had it gone straight there in the 1st place. It's not just along a specific route either, whether below or on the higher paths... the same thing keeps happening over and over again.

Gonna do one more attempt before bed, let them play it out for half an hour, see if that makes any difference.
http://unreal-games.livejournal.com/

One possible reason is

I ran a 2nd bit before the insomnia kicked in (le sigh) it took close to 10 minutes for anyone to score.

FlagBase0 is Red, but this issue exists for both bases.

I didn't actually see a lot of bouncing off any pads...
http://unreal-games.livejournal.com/

As for the bouncing - it looks to me like the pads are too close to walls and the path to the pads is from the side rather than from behind - this means that (a) they are not readily used by bots and (b) bots are likely to jump to the side rather than forwards (and on to the elevated walkway to the UDamage). There are also DefencePoints close to the jumppads which may have an effect as well?
Last edited by OjitroC on Fri Mar 18, 2022 7:50 pm, edited 1 time in total.
Top

It seems to have good architecture. With good paths for a match.

...In portuguese (espacial/especial) up there.
Top

One possible reason is

: Gulp :
There is a little small difference in height from Blue FlagBase and Red FlagBase... As result, based on "PointReachable" test, Little Scout said that he cannot reach at FlagBase location so paths were not generated... However, geometry and FlagBase properties and codes might allow capturing flags as long as this node supports "Touch" function without to reach exactly to the node and then... we can create two or more paths pointing to said offending FlagBase.
By looking at Blue FlagBase and figuring visible connections we never checked the other base which has visible missing routes - MapGarbage only confirms what is already visible (but was not checked).

Several small fixes in RC2, among them the Redflag issue and other things im not satisfied with. The map is build in the v436, and it seems to be a 469b issue whith the spin of the skybox, working different offline/online, so need to look at that aswell.

--> Plz let me know if you find other issues, not mentioned in the Topic.

Wow, I hadn't seen that it was for download up there. My opinion is one of the most beautiful CTF maps for UT99 I've ever seen.
Congratulations.

Edit:
This map ran perfectly. No failure occurred. With bots it was great.

Edit2:
If I were to say something that would interest me for an RC2, it would be to refine the sky, in the detail. Other than that, everything is great.
Top