This was initiated at the resquest of -POTS- who's been following the recent releases of maps for XV with great interest. 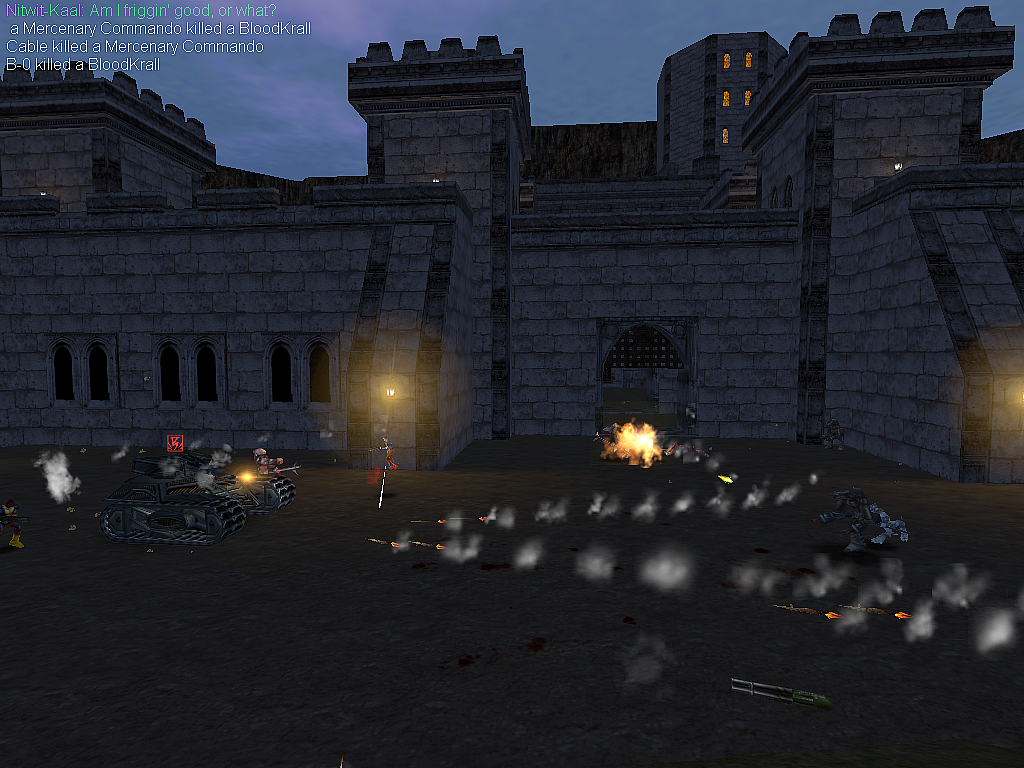 While he did request this map, I went looking for other versions as well. This version, as it says in the selection window, was built from scratch by the mapper Bulldozer, who said he based his design on a previous version by Sai; that version is on UnrealArchive but I haven't checked it out yet.

I replaced non-standard UT weapons with standard equivalents, replaced an instagib with a redeemer, changed up the monsters to lessen monster on monster deaths, changed Behemoth projectiles to something that can't kill Titans (which I indirectly learned of via SilverSound), and as this seems absolutely necessary with any XV map that has a boss monster... 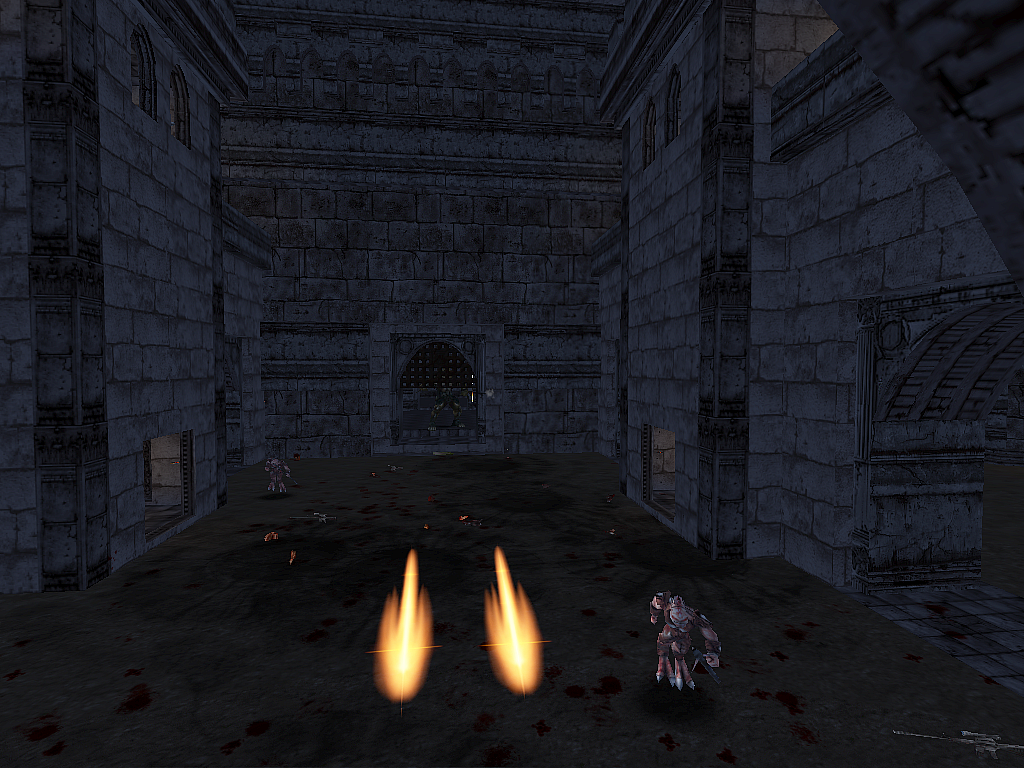 ...gave the Boss projectiles from one of the XV on the map!

Had a little fun with the in-game messages too. Maybe too much fun. 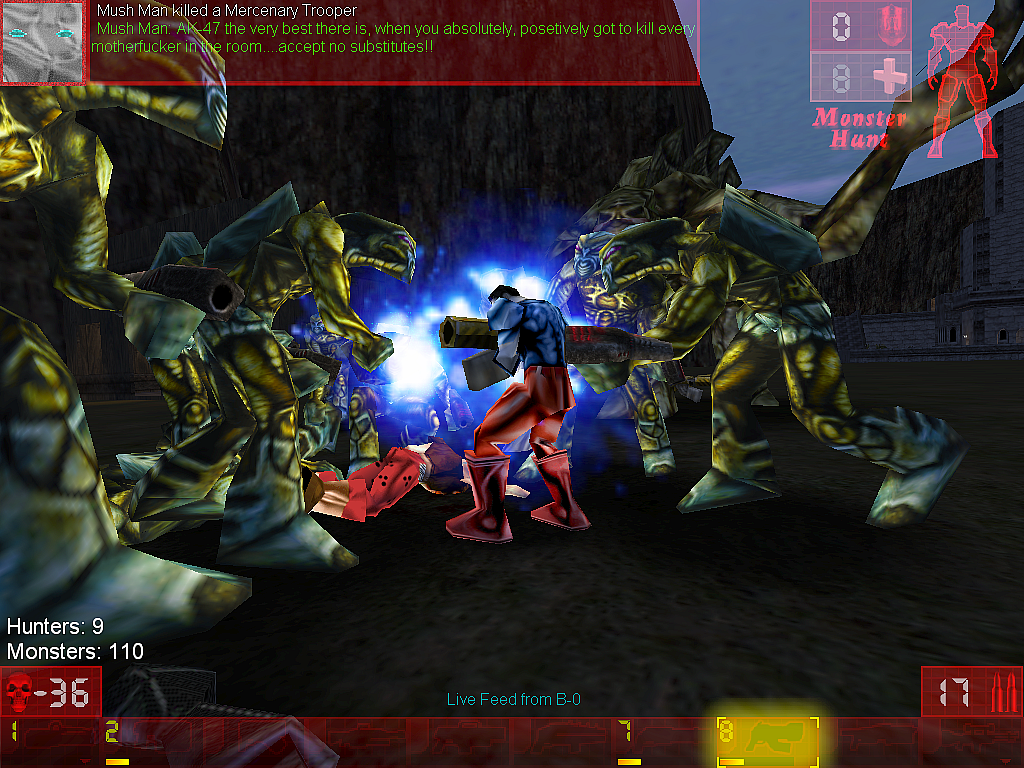 ...due to having access to the base, I went with jeeps and 2 of one of the smaller tanks; it's possible the larger tanks would've worked but this map is both large and small in certain respects and I felt the larger ones took up too much room.

Plus, wasn't positive the larger ones could drive through narrow passages.

A glitch on the map I toyed with consulting someone else to see if they could fix, I ultimately passed on. The main gate to the castle will open before the Titans that need to be killed to open it if any player or bot gets close to it, but the CreatureFactories in the castle don't activate until the aforementioned Titans are dead. If they're not activated, the things that need to be done to access the exit don't start up... so that didn't seem to be absolutely necessary.

Map originally had a PlayerBot on it, which I tried to reconfigure using ZenCoder's method, but while that works well in Deathmatch & CTF... not so much MonsterHunt. Hence, I removed it.

- excellent for XVehicles. One of my favourite MH maps - along with the other versions of Minas Tirith.

A couple of things from the log which may or may not be of interest or, indeed, importance :

The first line repeats quite a bit and is something I have seen before; the warning for the Titans I haven't seen before.
Top

I don't know what that means.

The only Creature Factories on the map have nothing to do with the StoneTitans, as they're placed directly on the map. They don't spawn in.
http://unreal-games.livejournal.com/

No, there's no relationship between the ScriptLog error and the two ScriptWarnings.

I've worked out what the errors are :
1 ScriptLog error - ThingFactories rather than CreatureFactories are used to spawn the various monsters;
2 ScriptWarnings re Titans - StoneTitans 5 and 6 have the same Orders and OrderTag (Guarding/EntryDoor) as the other StoneTitans but these two are not linked to the door opening event - hence the warning that there is no 'OrderObject'.

Neither of these appears to be of any significance or to have any impact on how the map plays and runs.
Top
4 posts • Page 1 of 1