Tutorials and discussions about Mapping - Introduce your own ones!
9 posts • Page 1 of 1

An interesting question but a difficult one to answer because of the sheer volume of maps out there.

From a personal point of view, I tend to only play those maps which have a reasonable degree of what one might call 'visual interest' - so interesting layout, architecture and texturing with a coherent 'sense of place' (plus, of course, good gameplay) - at least, I'll play anything once but only keep those that fit these criteria in my folder of maps I'm currently playing (so at the moment that contains maps like Ebonhelm, TatooSaloon and Refined from [NES], FNB's Four Temples and some 'converted' Infiltration maps - all of which have a distinct character and are broadly 'interesting').

Off the top of my head, of the stock UT 99 maps perhaps Darji and Hydro could do with some reimagination - both are fairly drab in terms of the textures used - not a criticism of course given what was available when they were created. There are quite a few interesting versions of Deck around which show what can be done by using different textures and/or by making some changes to the geometry. A derelict Hydro invaded by tropical vegetation (plus appropriate creatures)? A hi-tech, clean, sharp, bright Darji?

Quite a lot can be done by changing the atmosphere of a map - adding vegetation and different ambient sounds plus putting in some 'creatures' like birds, scorpions, snakes etc (or rats in the declining/derelict urban area type of map). In some ways, the more open, terrain-type maps possibly offer greater possibilities as one can add all this kind of stuff and change the character/atmosphere of the map quite radically - some years ago I did a tropical and a temperate version of a large donut shaped map, AugDonut (basically a large broad circular terrain map that had some buildings and water features) by adding different types of vegetation, using some snow textures in the temperate version and putting in birds and other creatures - fun to do anyway.
Top

I'd probably go with quite a few from here:
https://unrealarchive.org/mappacks/unre ... 84e62.html
My work for UT99: Counter-Strike VP, MaleOne+ & FemaleOne+ voicepacks, DM-XC-NaliTreeV2 (from the 2012 Xmas Contest mappack), DM/DOM-20AC-CastleGeorgeV3 (from the 20th Anniversary Contest mappack), (NEW!) DM-UFFO
my small spec of files at Google Drive

I was also thinking about Hydro-16. Something that is still played online, where a fresh coat of paint would liven it up a bit. (DM-Morpeus? CTF-Terra? DOM-Sesmar? AS-High-Speed?). Doesn't necessarily have to be stock. Just thought it would be a good exercise to try and improve my geometry/texture skills, without having to invent a map layout from scratch.
25 Anniversary Map Poll | 25 Anniversary Map Signup

Yes, Terra would be a good candidate for livening up somewhat - had forgotten all about it but it certainly has possibilities as the textures are now somewhat dated. From memory, Sesmar is fine in terms of its overall appearance (textures, details, atmosphere, etc) but it would be an interesting exercise to reimagine it as a set of spaces with a different, distinct character.
Top

I had thought about making this a poll but like you said, the sheer volume of maps for UT is staggering.

I looked at servers to see what maps were being played online, which narrows things down a bit.

But I'm hoping other players who read this post might chime in to suggest some map candidates as well.

There is this one stock CTF map which is really bad layout wise ...
found it:
Darji Outpost #16-A CTF-Darji16
Layout is meh with many dead ends and the textures are ...let's say they are no longer up-to-date.
Only the skybox looks nice on this map.

If you want a challenge take this map

I'd like to see what people can do with my own ParkingLot.

papercoffee wrote: ↑
Tue Jul 12, 2022 2:28 pm
There is this one stock CTF map which is really bad layout wise ...
found it:
Darji Outpost #16-A CTF-Darji16
Layout is meh with many dead ends and the textures are ...let's say they are no longer up-to-date.
Only the skybox looks nice on this map.

Agreed, the only stock map where Q3TA-like arrows guiding to bases would definitely help the navigation if no changes to the layout itself are made. Confusing as hell. 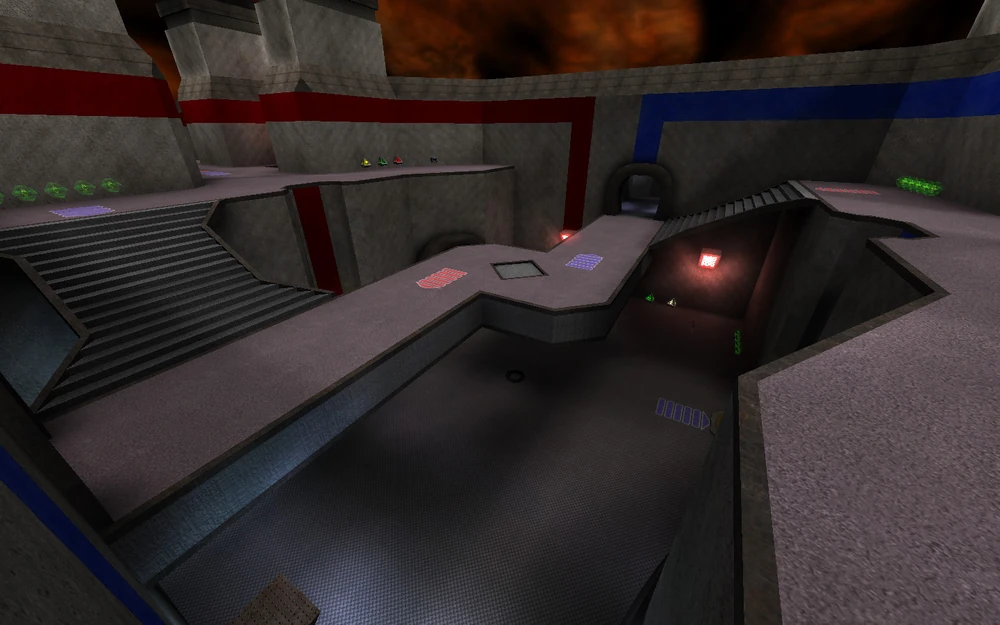 OldUnreal U1v227/UTv469 Localization Project coordinator/spanish language maintainer - Unreal Wiki
ProTip 1: anybody using the phrase "I'm a True Fan and You're Not!" is an obnoxious, self-centered, egotistical, elitist, narcissist douchebag.
ProTip 2: anybody who uses the "Royal We" when making a demand wants to pass their own opinion as everyone else's.
ProTip 3: Only the people that do nothing but criticize don't make mistakes. Do things. Make mistakes. Learn from them. And screw those who do nothing but throw poison and criticize.
ProTip 4: If the Duke Nukem Forever fiasco wasn't enough of a lesson, perfectionism leads to nothing positive. Don't be afraid of releasing a buggy product. Even the most polished product has its flaws.
Top