Tutorials and discussions about Mapping - Introduce your own ones!
Post Reply
1541 posts

EvilGrins wrote:Nuclear races looks very fun, though I doubt I'd be able to handle that.

It's actually pretty easy once you get a hang of it, and I'd dare say NR is the best way to learn how to handle a Strangelove, but NR isn't just limited to SLV - other vehicle-type weapons could be used just by running a mutator that replaces the redeemers or something.

Metalfist thinks our coder, GF-Rex should just release the mod. I think Metalfist should finish NR-Anulpha because it's a wonderful futuristic and huge map. Rex is occasionally seen on Steam, I believe. The main cause Rex never finished it was probably because us mappers were too lazy. I only have one fully complete NR map, one fully laid out map in beta (seen in the video above) and several tracks that are nowhere near complete. Fist has two tracks fully laid out, I believe, maybe more. Also, the SLV community has basically died, with only occasional occurrences, where some of us get together and decide to play a few games, so I guess his interest waned in it. I still think NR should get released, because it's not just the SLV community that could enjoy this mod, I've seen a ton of other weapons in online servers that could work great with NR, e.g. rocketx and all it's derivates. I've noticed they're still pretty popular online.

NR was mostly plagued by some weird bug that surfaced when using SLV - the first time you run the mod on a server, usually with 'admin servertravel', everything would work fine, but if you restarted the map or changed the map to another NR map right after that, the SLV started behaving whack - instead of max afterburner speed of 30m/s, you'd go 40m/s. Instead of boost speed 40m/s you'd go 50m/s. The only way to work around this was to run another gametype inbetween, usually with a different version of SLV, then run the NR map again. At the time we were testing it online, it wasn't included on mapvote, so we always used admin servertravel with the gametype and mutator version used straight from the console. There were probably other bugs, mostly involved with starting and ending the race, but iirc, those got ironed out.

I still want NR to be released because I honestly believe it's a mod that has potential to be at least somewhat popular in the still alive UT community. Also, if NR ever sees public daylight, I hope some coder can help me/guide me/teach me how to modify some of the existing UT weapons. Namely, what I want is:

The regular UT rocket launcher - alt-fire to lock on to a target, primary fire works the same, but the projectile itself would be fast enough to catch up with SLV's. (around 35m/s relative to the way SLV measures speed, but not fast enough that you couldn't use boosters to get away).
ASMD - alt-fire orbs would be much slower and eventually stop, hovering in place until they blow up themselves (regular altfire splash radius and damage) or get triggered by the primary fire.
Pulse gun - primary fire projectiles slightly faster, alt-fire distance slightly longer
Flak cannon - primary fire spread is smaller, effective range slightly longer.


Ah yeah I remember this. It was a blast to play....right up until everyone figured out how to cheat. I wonder if that's why Rex never finished it? Theoretically ACE should stop that way it was exploited so the games would be OK again. Is Rex still around?

I have no knowledge of what you're talking about. As far as I know, as long as the levels are well designed, you can't really cheat the checkpoint system. The particular map in that video lacks ICH's inside windows because it was a beta test and I was lazy, but the checkpoints were more or less placed in a way where flying through the "windows" wouldn't give you that huge of an advantage. If there was another way to cheat the system, I'd like to know how.
Support Nuclear Races by visiting our ModDB profile

If you want to email me I'd be happy to explain why I think what I do. Also the problems you discuss were already fixed by Fluke over at HoF. I'm not sure if he is still active though. He was having some health issues last I heard, but Schlong would know right off. If you can get Rex into a conversation with him then I'm pretty confident that the issues can be dealt with, including the ways it can be cheated.
So long, and thanks for all the fish
Top 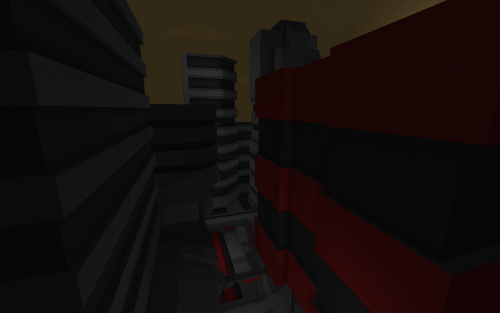 Not that big of a progress, but I'm mostly posting this to encourage activity in this thread. I miss people posting their WIP stuff here.
Support Nuclear Races by visiting our ModDB profile

I may as well post what I have for my Unreal 227 mod. The idea is a side-scrolling platformer/RPG similar to Xenogears (or in UT's case, similar to SP2D in level design concept). Here are shots from the editor, I'd like to work on the map more but I suck such massive throbbing [BLAM!] at UnrealScript that not much progress has been made in. . . About 2 months because of this .ini debacle. ;^;
(plus I need to get on those sprites so I have them on standby when I can start making animation for the player moving around)

In the following images are some ideas I have for general level design, hellish levels (I want to push for a Doom aesthetic in level design as far as textures and general design appearance goes), blue levels (inside a computer, possessed by the forces of hell, in hell), and what I can only describe as space hell. hell. Also a pic of what has been made thus far -- a custom camera pawn and camera triggers to change how the camera views the player. I would like to show off the player, but they are a literal chess piece right now and the computer I am on just crashes from me shooting at the ground in Unreal 227 so that's not happening any time soon. General protection, why have you forsaken me? Earlier this week I posted an edit for Hermskii on his forum · http://hermskii.com/forum/viewtopic.php?f=37&t=3801

He didn't ask but I just felt like it, bopping ideas back & forth with him. Mainly I censored the UTDMT, as Herm prefers less swearing than most online.

Decided to do the same for papercoffee: 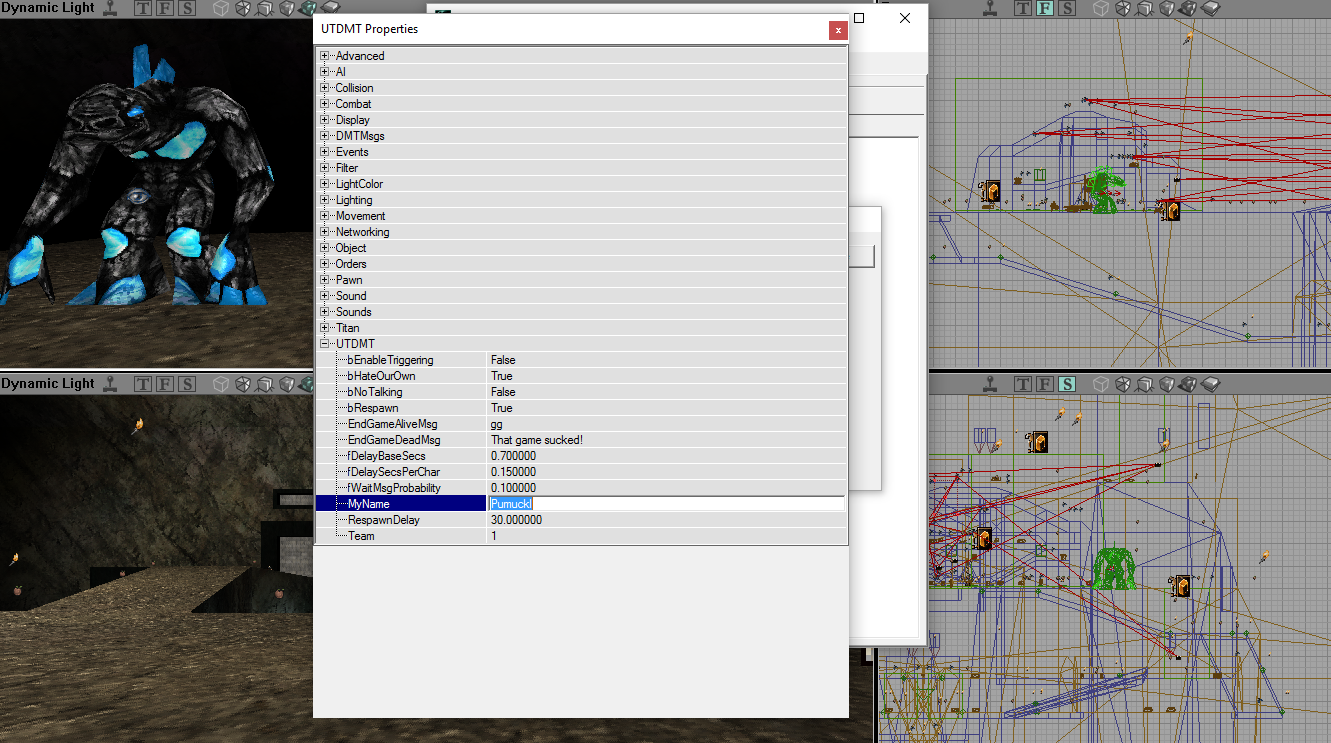 Asked him what his fave large size CTF map was, he told me 2: CTG-CaveGiant & CTF-NorthernLights...

...so I opted for both:
Spoiler
Show 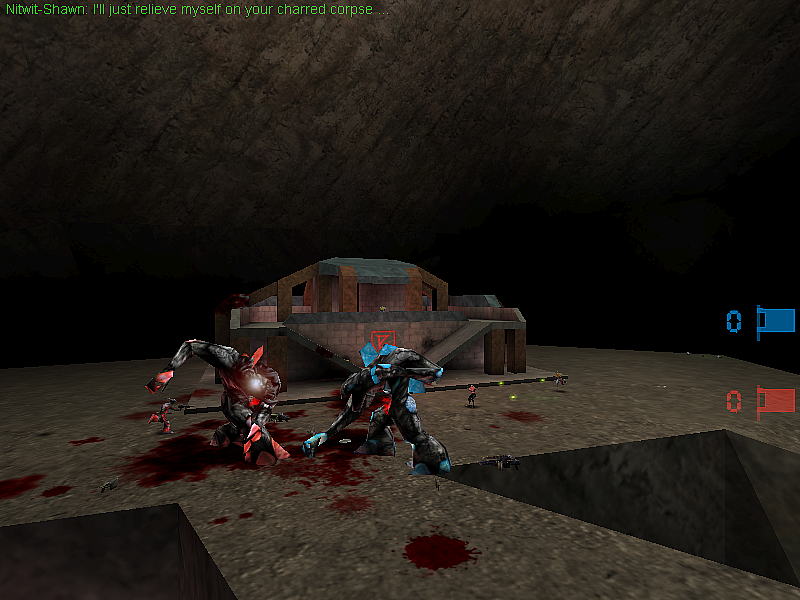 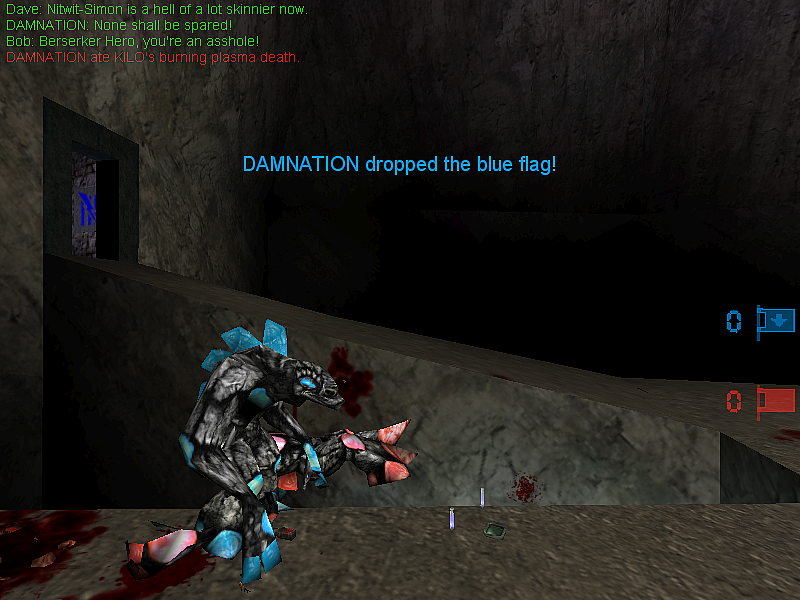 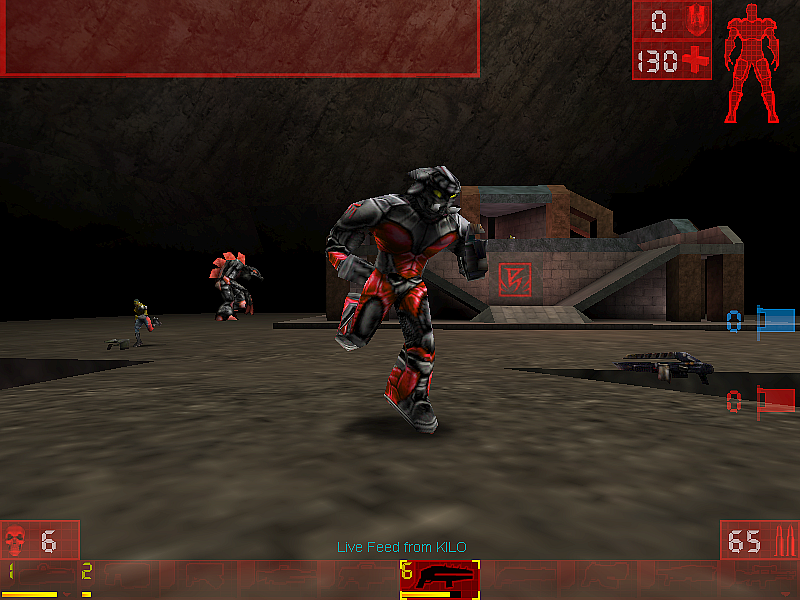 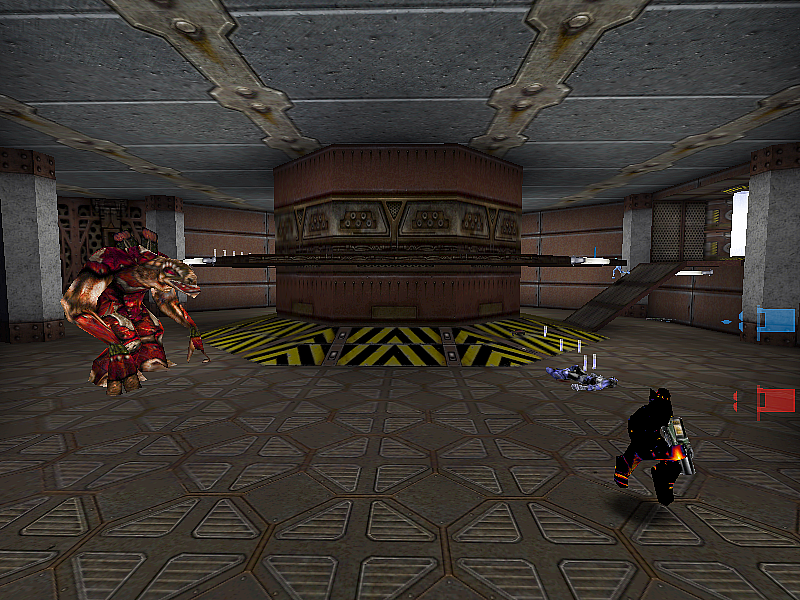 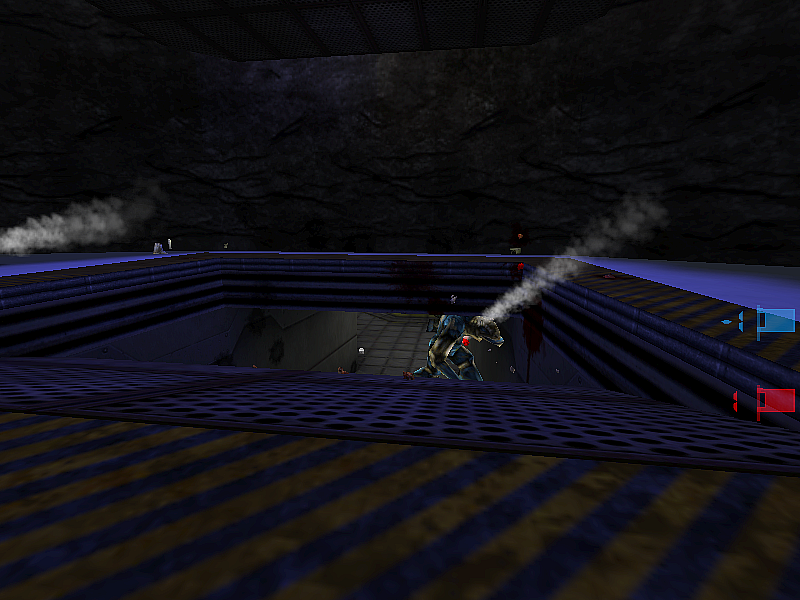 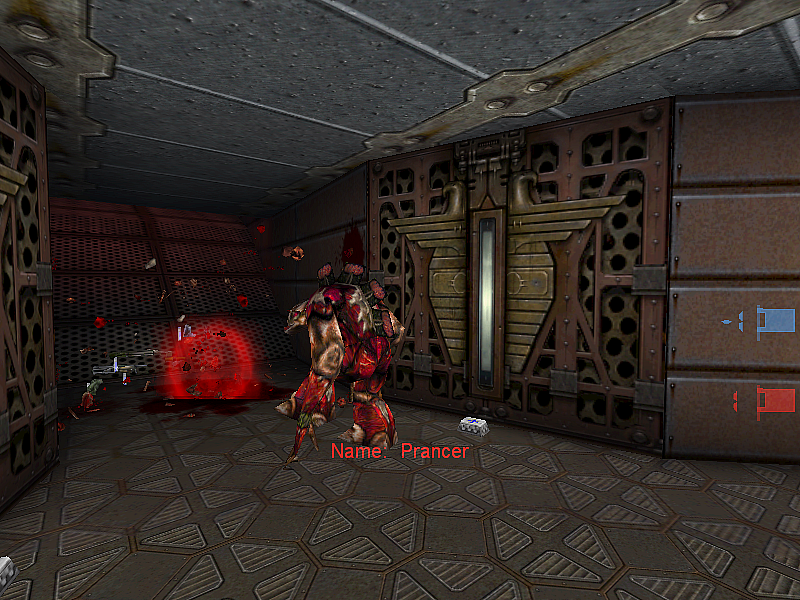 Cave one I'm going to translate what the UTDMT says to German, and naming them to paper's recommendations.

Northern's a little more basic, minus some other changes I'm making around the map.
http://unreal-games.livejournal.com/

I made this MH map when i was 9 years old in 2010 and currently it's still my best map. 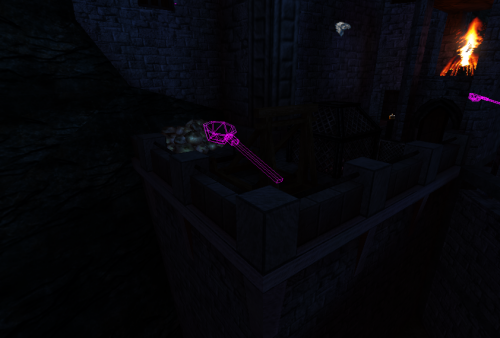 Please tell me there is a catapult here... Nice screenshot

Thanks, and as you might see, there's another one on the other side. They'll spice up a certain showdown

DM-(NotYet)-Condemned from the NotYet pack :3 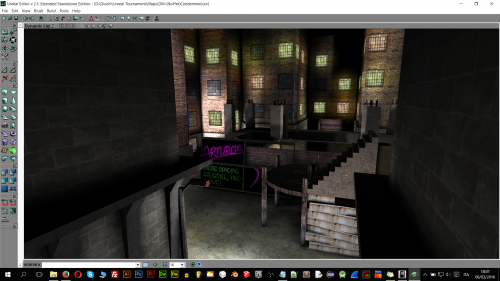 Just wondering when you are going to relase this map?
Top

Going for a nice urban style, I see! I hope you're gonna do something with the stairs in the foreground, right now they look kinda arbitrary

Just wondering when you are going to relase this map?

The map is actually finished, but I'm continuing another map of the same pack. University takes lot of my spare time :/
Idk if I'll release one map at a time or just release the entire pack

@PoF
The stairs are very blocky and not so construction like ...you should make there a ladder like stairway.
-=: http://jokercologne.deviantart.com/ :=-