Tutorials and discussions about Mapping - Introduce your own ones!
Post Reply
48 posts

What are these for btw?

A link to someone talking about the custom button as well:
http://www.i4games.eu/forum/t6841-anyon ... highlight=

Different links in there.

What are these for btw?

Add the following line to your UnrealTournament.ini file in the 'EditPackages' section:

You may do whatever you want with this add-on as long as it is non-commercial use.
And it's a nice thing toi give credit to the author.

Usage:
- Add "MapPurger" to your EditPackages in Unreal.ini/UnrealTournament.ini, open UnrealED
- Right-click the newly created button in the toolbar to see options
- Choose a package and hit "Build" to remove all references to that package in a level

Additionaly, open the class in the editor and you can modify the code to add extra
packages or functionality!

WARNING: Make sure you remove the code references to that package after you've purged
the map of those actors, otherwise MapPurger won't be able to load next time since
the code is refering to a package that no longer exists in the map!

Hopefully I updated all the DL links in the wiki as there are a few brush builders available.
They are just pre-made brush shapes for you to reshape.

Hellkeeper has a tutorial for Tarquins builders, in French and English.
http://hellkeeper.net/tutoriaux.php

The TEBB is really great tool.
There is one small correction you need to do (below pic with red Rectangle), instead of "ShapeSource" it should be "PathSource". 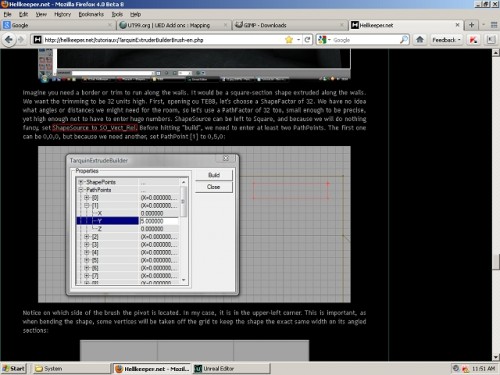 I have one question.
How did you subtract that custom room brush?? Did you use 2D shape Editor for that or with the help of TEBB?? 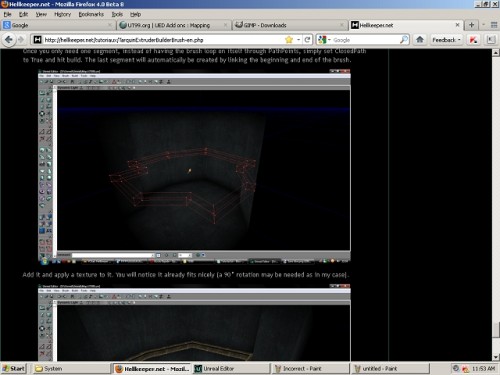 I tried, but the brush is subtracted from inside. 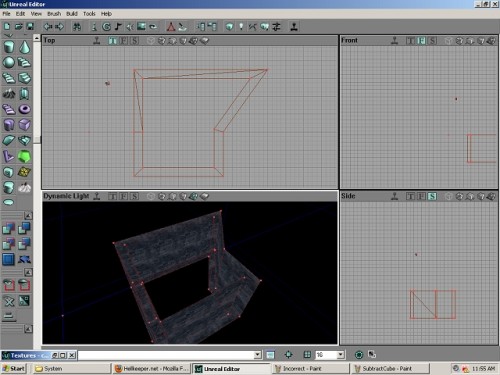 Regarding the room,it's just a set of 2 or 3 subtracted brushes to get 90° and 45° angles, it was done with normal cubes and vertex-editing. It's just a test room to demonstrate how to use the TEBB there for trims, don't pay attention to it

The error has been corrected, thanks for pointing it out. I tried to be as thorough as I could when explaining each setting, so tell me if you find it clear or nor and if there are things which you thing should be added/said differently etc.
You must construct additional pylons.
Top

Time to bump a dead body for something.

I was working last time to some garbage map with stuff not for MonsterHunt... and I have realized that I need some tool in Editor for replacing some stupid Pawn with an alias Default in order to clean the mess during game Play. Purpose is to replace a monster or any actor with an alias with the same position in the same location - even copying TAG ( perhaps I have to add Event too ), also removal of paths without writing commands but only 3-4 mouse clicks (for mouse addicted users). Removal of crappy Player Types added mooing the game, even removing all sort of Pawn used (default matches doesn't need anything like that), and... in a clean map state command for defining paths ("paths define" for whoever needs it), including garbage removal command.

Of course map in cause has been screwed with content into MyLevel but... such a task probably is better to have another way - replacing with stock actors all evil content using a... "builder" add-on.

Until Higor or other advanced Coder will come with something more featured (linking two selected nodes with any matter, etc.) I'll finish my toy and probably if is requested I'll add it as attachment here...
Probably I'll try to launch XC_GE if possible in order to connect Two rebel Nodes if Editor doesn't connect them in default build using XC_Engine_Actor.

Edit:
Nope, transient XC stuff seems to not want to load in Editor for executions, being None... Anyway the rest of functions I think are good as they are.

MapPurger DOESN'T REPLACE anything, is a cleaner-only by deleting actors on demand.
Perhaps I have to implement something for MH mapping - a quick "mover-fix" feature and some lousy Monster checkers. Huh ? 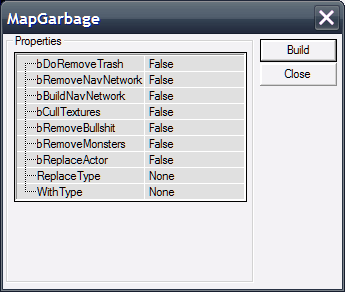 sektor2111 wrote:I need some tool in Editor for replacing some stupid Pawn with an alias Default

I had to do this only a few times by now and did it by exporting map to T3D format, replacing "Class=Unwanted" by "Class=Wanted" (and also "Name=Unwanted*", if desired) with a text editor and reimporting it. Worked fine so far.
"Multiple exclamation marks," he went on, shaking his head, "are a sure sign of a diseased mind." --Terry Pratchett
Top

One of my default issues is that one where I work a bit for something simple, on purpose to get the shortest route to the goal.
I mean No t3d export, no Text Editor, just a Button like for a simple cube builder where you have "options" included my pathing macro commands applied directly by Editor using mouse clicks and not writing stories in console.
Above Window is now... bigger somehow. By selecting True at some options (and parameters if they need) in 2 Milliseconds or less Editor will work for you excepting you from selecting actors checking properties (main movers by example) by pressing Build Button. Let me quote a few Features added:
- bRemoveTrash - does 2 Commands like Obj garbage - flush ( but with 3 mouse clicks - and maybe some ENTER at toggling bool values);
- bRemoveNavNetwork - is removing all Path-Net - all conenctions on purpose to have a clean future Path-Net properly modified;
- bPreNavigAddHck - means Pre Navigation Hack For Manual Build Nodes - even in small places but which can be connected;
- bBuildNavNetwork - This will build connections between NavigationPoints;
- bRemoveBullshit - Is against noob cube drawers

adding Players in map - will except you to find them - Editor is finding things faster enough;
- bRemoveMonsters - No more life forms will exist after using this - except those cameras used by Editor itself;
- bCullTextures - does a Texture Cull command if you are lazy at writing it;
- bTweakMHMovers - ahah, simplest way to set movers (not all dumbness is fixed because we have geniuses guessing the mostly) but it does a default crush mover fix, and has dependent optional sub-features:
a - bTweakMoverGroup - attaching an unique group. Need map save and map reload and then activating all New groups;
b - bDoPawnOpenMover - making mover accessible by Monsters;
c - bBadTrgMoverFix - fixing bullshit TriggerControl used with Dispatchers, etc. by ignorant cube drawers (those are not mappers as they claim);
d - bNoGrabMoverCheat - another fix for clueless cube drawers;
- bTweakMHFactory - here we speak about craps set in Factories any of these 2 stock ones having sub-features:
a.1 - bChkMHFactAttack - Factory can react as a trigger and will not be fired if a creature is touching it, only by players/Bots.
- bBoostAmmo3X - a feature for those hunters playing without regenerators, making ammo to spawn 3X faster and having 3X default load ( example not 10 but 30 projectiles per piece collected );
- bXCPostNavHck - After using repeated XC_PathBuilder and Inventories losing marker data (ring bell, Master Higor) this feature will recover Inventories properly to their InventorySpots because they were divorced;
- bReplaceActor - this is self Explanatory - A SuperDuperPupae can be turned into Pupae with Event and Tag accordingly (I did not added other features) just a simple replacement. You might need to move through Edit Window a bit for figuring changes if classes looks similar because rotation it's in account as well... This is coming with 2 boxes:
b.1 - ReplaceType - Actor to be replaced (eg Pathnode) - Editor will complete class properly;
b.2 - WithType - Actor used as replacement (eg SmallNode) - Package has to be loaded first or else... it's your crash not mine - also class name has to be mentioned and Editor will complete formula for you;
- bSPawnTweaks - essential ScriptedPawn tweaks (some people are dumber than sh!t), here we have some "reset" for pawns and health limited as well - this can be enhanced as well with more stuff....:
c.1 - MaxHealthAllowed - sub-option of above Bool value;
- bNoRotateWeapon - this is for helping mappers to set weapons which are not rotating in game without to mock replacements with dumb setup. It does include a sub-option:
d.1 - ChangedRespawn - for weapons which are not rotating you can set a RespawnTime (not less than 3 seconds - preventing spamming log-pickup file for dumb admins).

Features can be used multiple at once but you have to look well what you do - by destroying pawns you will not fix monsters as long as they are vanished first. But firing Pathing macro and Purging Garbage works together if BUILD button is pressed with above Bools set TRUE, or in any case where these multiple actions are not linked each-other in any way.

[attachment=0]Map_Grb.PNG[/attachment]
I did a sample test in Map MH-Demons][ that one crashing more servers in the past - even if has good Bot Support for advanced MH types (just wonder if a Test feature it's needed in MH which I was writing nearby MHBotyMan4).
In this map you'll be "glad" to see what settings have been done (Editor.Log)- I don't know who was running that in normal conditions in that time... Anyway it's fixable also in run-time so is not a problem as it is for me, but some of them with "U4eGauntlet" game content are utter garbage for MH subject having nothing in common... 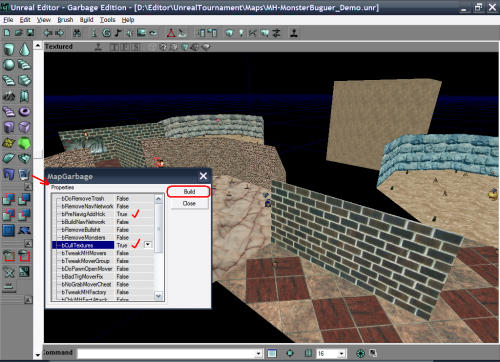 A Visible Part of Builder - it looks scaled natively...

OK, at this moment I'm pretty much ready (updates will come when are needed). The note about this toy is the fact it moves pretty much fast even on a lousy machine if map is small. In order to see if it was doing something or not, you have to watch console log in Editor.
This is the toy:

[attachment=0]MapGarbage.zip[/attachment]
Then keep going, dudes, I wanna see other toys if you have something for sharing...

MapGarbage.zip
PDF document included - doesn't include integrated web links or such junks, but it does include source-code...
(132.7 KiB) Downloaded 85 times

For above tool have been added: a paths corrector (PathNodes on purpose), hiding some default sprite Actors, un-hiding those default sprite actors (lights, triggers, etc).

Thank you very much for this handy tool.