Tutorials and discussions about Mapping - Introduce your own ones!
Post Reply
12 posts • Page 1 of 1

I found out something really weird. I was working on a new map and thought it wouldn't have any problem so far. I did ran across an unusual bsp error that result into a hall of mirror (HOM) effect (and any other error it may occur) because of a semisolid, tried non-solid and it got rekt, and then I changed it to solid and it turned out just fine.

All these times I'm looking at other people's map and wondering how it's doing, if I try to build one just like it, it will screw up with bsp errors, no doubt. I talked to someone about it and we looked over the map in teamviewer and I showed him the error what is going on. He was confused about it and told me to send him the map. He didn't get the error, he even rebuild it with semisolid and got no error. So here I am, going wtf, and I don't even know what to think other than my computer is bad for bsp? LOL.

& no I'm not running a low end PC but it just... weird. So hopefully I'll just work on it, and can build it without any thing that stop me from building it and if it have errors, I'll send it to someone who can rebuild it with no errors. :/

No wonder why my stalwart basement map can't get an additional mover without an error? Maybe gonna try it again on my laptop... but dunno.
I thought the whole time I was building the map wrong like it need an additional detail like planting a seed and properly grow it to get a full figure with orders first to last and stuff. Just ugh.

So, I don't know why such error happen, but on other it doesn't. Why do this even happen? Am I cursed? Discuss.
/end rant.

Are those Semisolids touching the void?
-=: http://jokercologne.deviantart.com/ :=-

Yes, papercoffee is on to something there...
Remember - Semi Solids should Never touch or intersect any solids or non-solids!
Always keep Semi Solids at least 1 unit away from any other objects.

Hook wrote:Yes, papercoffee is on to something there...
Remember - Semi Solids should Never touch or intersect any solids or non-solids!
Always keep Semi Solids at least 1 unit away from any other objects.

B.) DO NOT subtract something from a Semi Solid brush. Only additive brushes can be Semi Solid.

Noted... I was guessing the large brush area was pretty big to be a semi solid. So many small brushes of such can be semi? Hmm.

I'll have to try it without touching the border of the pool wall for semisolid..

Chamberly wrote: I'll have to try it without touching the border of the pool wall for semisolid..

It can touch the border but you have to be precise (snap to grid) because it should never overlap a subtracted brush. Not even a nanometre... 'cause this will create errors and the UEd-Goblin will be attracted.
-=: http://jokercologne.deviantart.com/ :=-

Why do you think I don't snap to grid? Does it not show in the pic isn't snapping to grid?

I'm not just a newbie to mapping.

Chamberly wrote:Why do you think I don't snap to grid? Does it not show in the pic isn't snapping to grid?

I'm not just a newbie to mapping.

I think unrealed have snap to grid on by default so shouldn't be no problem when they first started messing with it.

Semisolids can touch the sides of other additive/subtractive brushes, but they can't touch special brushes such as nonsolids (i.e. green brushes), this means you can't cut zone portals through semisolids either, they can't intesect with, this means, be inside other brushes (unless it's a subtracted brush that's built in the world before the semisolid was added), and you can't subtract from semisolids already placed in the world. Their sides can touch all normal additive/subtractive brushes, and I encourage you to rather keep them aligned and snapped to a grid rather than doing something as reckless as going into the 1 UU grid, but do keep them away from a nonsolid. If you want to use semisolids as invisible collision hulls, make sure they don't touch ANYTHING. If you need to fit one to a window, go to something like 4-8 UU grid and make sure it touches no other brush.

Trying to do any of the bad things I listed will shred your BSP tree or might even crash your UED before you get to rebuild your level.

Another thing to note is that your semisolids should not be very large. If you want to use a large semisolid, first make it a solid and see how many cuts it generates as a solid. Then convert it to a semisolid and see if your node count falls significantly. If it doesn't, then it's probably not worth having it stay semisolid. They're meant for adding small details that would otherwise break up a large surface node into several smaller surfaces, e.g. an extruded trims or pillars along walls, etc. They're not intended to be large surfaces in and of themselves, since they're intended to handle BSP cuts quite differently. I can't see the grid size from your screenshots, but I'm assuming it's 16. In that case, the semisolid you have is way, way too big and also seems to touch nonsolids, and any optimization gains from using making it semisolid would be small if nonexistent. 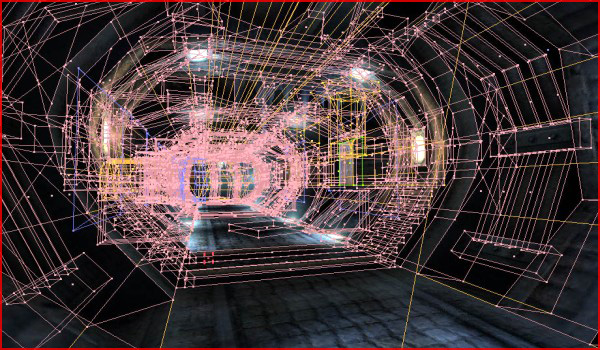 This screenshot from Hourences' semisolid tutorial (taken from Xidia Gold) is a good illustration of the type of brushwork you'd use semisolids for. They're for getting around high node counts and you'd generally use them if just adding brushes on an existing surface would create dozens of unwanted nodes.
Support Nuclear Races by visiting our ModDB profile

Your screenshots are in BSP Cuts mode, which is pretty much useless in most cases. It'd be better to see what it looks like in Zone/Portal mode, because then we could actually see the BSP cuts.

Semi-solids sometimes react strangey to external cuts which shouldn't affect them. Some cuts seem to overrule the behaviour of semi-solids and cut through them, usually resulting in missing face. However, the example you showed seems much too simple geometrically to be subject to one of these errors. Your brush doesn't seem to overlap any other brush or touch any strange brush. Howeve I can't understand what's the deal with the large green sheets above it, they might be causing trouble. Other screenshots or even getting our hands on the map could help us see what's the problem (and see if the problem actually comes from your computer only, which I doubt).

The solid brush also clearly makes a strong cut just above himself. If it alterates the BSP structure enough, it might "correct" or at least make unnoticeable the problem which causes the disappearing face in the semi-solid example.
You must construct additional pylons.
Top

Tutoring isn't a way of what to do when I'm having some weird stuff on my PC as other rebuild it and they get no bsp errors because I know what I am doing. But whatever. Such off topics....