Looking for a good pathing tutorial

Tutorials and discussions about Mapping - Introduce your own ones!
61 posts

JackGriffin wrote:Even worse, cheating this pathing network like you were talking about is not a road for normal people.

Umm, if engine cheats you, then you might respond with a proper coin in order to gain results. I don't see anything harmful at using A Clean pathing only for navigation without to linking SpawnPoint into Network - I'm wonder why that crap with spam is a NavigationPoint after all. If you wanna move them later because of a bad game occurrence you can do this anytime as long as are not registered - already Higor mentioned moving some stuff post-pathing - I don't even register that stuff into Network. Trivia: Playerstarts can be higher and placed in the same way post-pathing. Default UT uses even a Forach iterator if PlayerStarts are not in NavigationPointList and if iterator exist in default, then EPIC might be silently suggesting this way but unofficial (no docs specifications). Just look at "FindPlayerStart" and let me know your thoughts. Add a few PlayerStart-s in a cube and don't do a pathing build. Try to play - I think it works even this way, hehe...
Top

Does it matter what order you place the apples down?

And when looking at paths, if they're red instead of blue... is that bad?
http://unreal-games.livejournal.com/

EvilGrins wrote:Does it matter what order you place the apples down?


And when looking at paths, if they're red instead of blue... is that bad?

Red path are hard for bots to use. They will still attempt to use them. In other words, it's not bad, but test your map. If the bot remains stuck or fails to jump onto something he needs too, then it's probably a red path that's too hard. Usually, they will behave normally, however.
You must construct additional pylons.
Top

I want to tell a bot to fall down into a water source from a large gap. How do I path this

In that AS-Frigate, I used my EasyKickerMod to make a jump pad to that empty place (guess it's just deco) and use it as a Sniper base for blue team. I want people to jump back to water when the pressure tanks are destroyed!
Top

EvilGrins wrote:Does it matter what order you place the apples down?

EG, imagine that exist maps, DM the mostly, with bunches of routes - players don't like "ends in a hole" always must be a way to evade from a combo or such. In this case you really cannot do wrapping them. Editor with previously introduced stuff can manage a clean ReachSpecs build and InventorySpot-s starting with number 0 cleaned and no trash recorded. This makes cycles easier - logic, if are less things to process engine moves faster and better having resources. Pushing at limits will affect less important things - A.I. this is easily to be noticed in heavy loaded MH maps, A.I. sleeps well, which rarely happens in less loaded Levels.

In another moments when paths goes through tunnels - paths become marked RED because NOT ALL creatures are gonna follow such a rat-hole - see a fat-ass SkaarjBerserker or Brute - they are paths seekers as well. However, for Bot that one might be BLUE (in its mind) but this is not a default rule, there are also chances for a red one to have a denial too - it depends on geometry from that place. For player if lamp spawns at ShowPath there are 99.9 % chances (if not even 100%) for that path to work at Bot. Center of Bot's body is at 39UU. If you look well InventorySpot has 40 UU - very closer. Well, InventorySpot is addressing Bot - which one else from stock is interested about that if not Bot and those ugly as heck and bugged old Bots ? (me randomly included). So to speak I did paths not a single time using 40 UU height working flawless in ramps from any kind and not as documentation said at 300-400 UU. I have pushed them even at 600UU - being BLUE and were pretty perfect operational. I personally drew a conclusion, PathNode it's too big for Bot matches, it is addressing UnrealI creatures as well which for Bot are "too safe". Bot doesn't need such big-ass path because it is thin like a stick and can go in places with paths where Editor cannot even place a PathNode, "Actor doesn't fit here" is console response. But for sure I can prove that Bot does Navigate in such locations because I did this, and I love to do this "Kick-In-Eye" at Engine.
Top

In simple terms a red line means 1 node can see the other, but not clearly.
Move your cam-view to one of the nodes and look at the other. You will usually notice that part of one of the nodes it obscured by something solid.
Sometimes it is because 1 or other is too low or too high.
As already mentioned often it is because the gap is too narrow (never make realistic sized doors)

The order you path in does not matter while editing, but every node adds to the map size, and when the paths are rendered a lookup table is created with each nodes possible connection to another.
This can add a lot more size depending on how complex the path connections are.

You can optimise the node numbering and the navigation-speed, by selecting a pathnode, then right-click and select all pathnodes.
Next, Right-click on a node and goto the "Order" menu and select "to last".
This renumbers all the nodes, and moves them to be the last actors in the map.
Don't forget to rebuild paths before saving.

As with most things, I wanna learn pathing well enough to fix maps.

As usual FerBotz was suggested as able to fix the problem...

EDIT
Serious now, gonna test and DL.
If I like it I might even provide the Botz pathing file

...but apparently even it wasn't up to the task:

Thing of it was, Terraniux did path the map but what he used didn't seem to work: 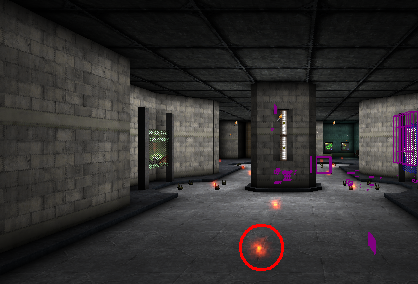 He used those orange glowy things to path with, and the bots ignored them... so I figure I take a stab at putting apples next to each of those glowy things and then it will work.

EvilGrins wrote:He used those orange glowy things to path with, and the bots ignored them... so I figure I take a stab at putting apples next to each of those glowy things and then it will work.

Right click on them and see what they are.
-=: http://jokercologne.deviantart.com/ :=-

papercoffee wrote: Right click on them and see what they are.

They are too similiar to these actors used with Teleporter for a VisualTeleporter alternative, like the ones in CTF-Face. :/
Top

These are in fact PathNodes but only with another Texture:
OrangeGlowyThings .jpg
This should not affect their functionality.

PS: I just gave bots a try, but they are just running from one enforcer to the other, because the respawn time is very low (0.100000 s).
You do not have the required permissions to view the files attached to this post.
"Multiple exclamation marks," he went on, shaking his head, "are a sure sign of a diseased mind." --Terry Pratchett
Top

Barbie wrote:These are in fact PathNodes but only with another Texture:

@ Grins and Gustavo ...what did we learn today?
Don't go always for how it looks.
You can give every actor type a texture you like (preferable a default or MyLeveled one) just check into the Display subcategory of it and there you see it.
-=: http://jokercologne.deviantart.com/ :=-

I still want back the apple sprite!

Also glowy pathnodes that emit light are perfect for debugging! I know that becauuse I already made a pathnode bVisible.
Top

And now a short memory refresh. WHAT exactly did I say wrong when I spoke about Bot Pathing in map CM4? It DOESN'T WORK in first zone. Perhaps would be better to use that FORCED one which I was showing privately to Mr.T. but he simply held the bad one not that with triggers - I misunderstood credits as long as has no change as adviced

.
ALL FIRST ZONE is loaded with multiple solids, I have already tested a total remake/rebuild of paths in that area and it doesn't works due to abnormally geometry deal bugging DEVPATH - KEEP TRYING 3 years, 30 years or 300 years if you like. Won't work with that geometry type + has other broken paths later and initially 0 LIFT access from A.I. (but I did it), letting author to continue the rest. Obviously MonsterEnd make me to have doubts about how Reachable is for A.I. in engine's terms.

Else if you'll finally get pissed off and tired - try AfterDark (that one worked cute for me) and Bot support is fully doable there. (hint: Put down that MonsterEnd because it's useless that higher).

However Bot support in first spawn area of CM4 is doable using 0 path technology as shown in that topic titled Paths or Not. Yes, this was one of those maps firing me in Bot Support with no paths idea, as long as that map proved and was showing how to make paths useless - and is not the only one like that, check paths in outside of map LostInTimev3 (lost paths vX). There, map is usable until almost exiting to dinosaurs door the rest of Bot Support in outside area is mythology. Of course If I've failed something and you can make them functional I'll be number one using them -

Edit:
Question: Did anyone (except Higor) try to generate a path-file for some simple empty map using Botz mutator ? Now imagine that pathing injection from an external mutator is somehow doable - not as Editor does but it might work. If the man developing these things was telling that we have problems in CM4 then I wish all of you good luck with pathing there

CM4 (MH-CrystalMine4) has a host of issues, and the MonsterEnd is damned near aggravating as all Hell for real players, let alone bots, but I've often wondered if pathing was the whole issue. Sure, the glowies don't work so great, but even if they did they'd have other issues.

Terraniux made that massive MH map from multiple smaller maps then patched them all together. Even with pathing it suffers the small issue that bots have issues crossing over the parts at the points the maps were patched into 1.

Simplest example being that the monsters on the map will only chase you to certain points and then stop, almost as though you crossed a warpzone (which monsters often have issues with) excepting there is no zone and in UnrealEd there's no notable difference at the points of contention... except when you cross over one of those threshholds the monster can't see you anymore even though there's nothing visible between you and it.

I don't think pathing can enable the bots to finish this map... I'd just like it so that they could play it a bit more thoroughly without having to be following an actual person on the map.

And that's not even my main concern, as I'm currently trying to path this · http://unreal-games.livejournal.com/107419.html · Seems simple, but I keep getting red lines from crossing over all the excessive pathing from the spawnpoints (about 25-ish each) in the various rooms.
Last edited by EvilGrins on Sat Jan 23, 2016 7:34 am, edited 1 time in total.
http://unreal-games.livejournal.com/