CTF-Entropy (did you guys miss me?^^)

Tutorials and discussions about Mapping - Introduce your own ones!
18 posts

CTF-Entropy (did you guys miss me?^^)

Hey there! Long time no see!

First of all, don't tell me... UT mapping is dead. I know that. This is why I didn't release a map since late 2010...
However I was still playing around with the good old UnrealEd from time to time for pure excitement, and guess what: If one does so over the course of five years, he will eventually finish a map.

So here you go:

"Entropy" is medium-sized CTF-map with a pretty conventional, symmetrical layout. But there's a twist to it:
Throughout the map, you will find laser grids in different locations. And while you can move through them unhindered, FLAGS CAN'T! So feel free to take the short, direct way to the enemy flag... But then, better make sure you know how to get it out.

As for the typical disclaimer: Polycounts are around 800 in many places, with peeks of about 1200. But I guess, by now mankind has finally built PCs that are fast enough for my maps.

Enjoy playing, and greetings to everyone still around! 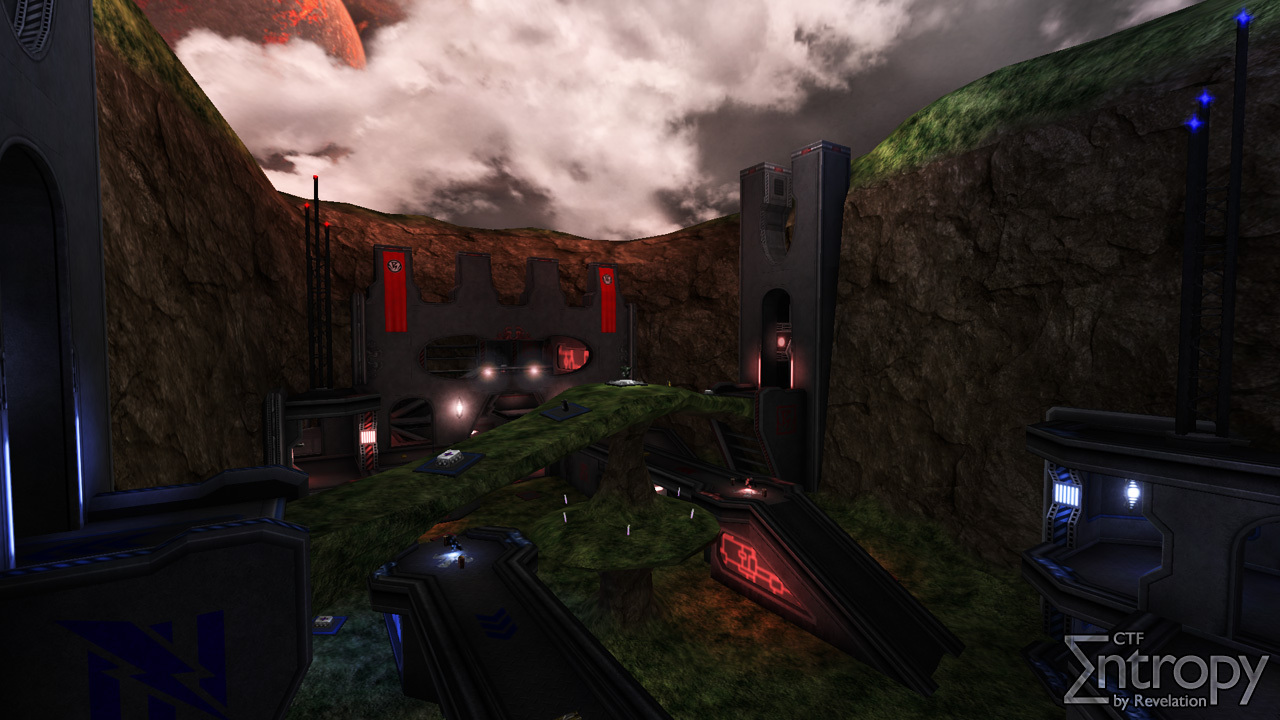 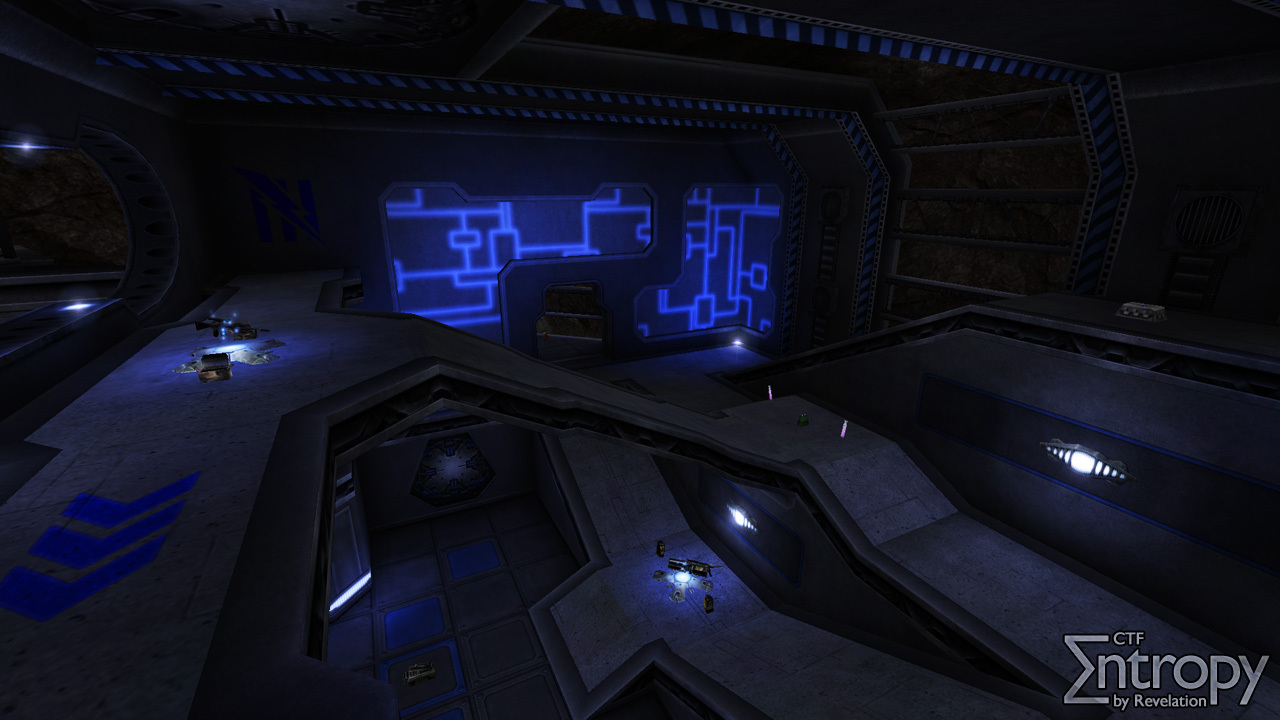 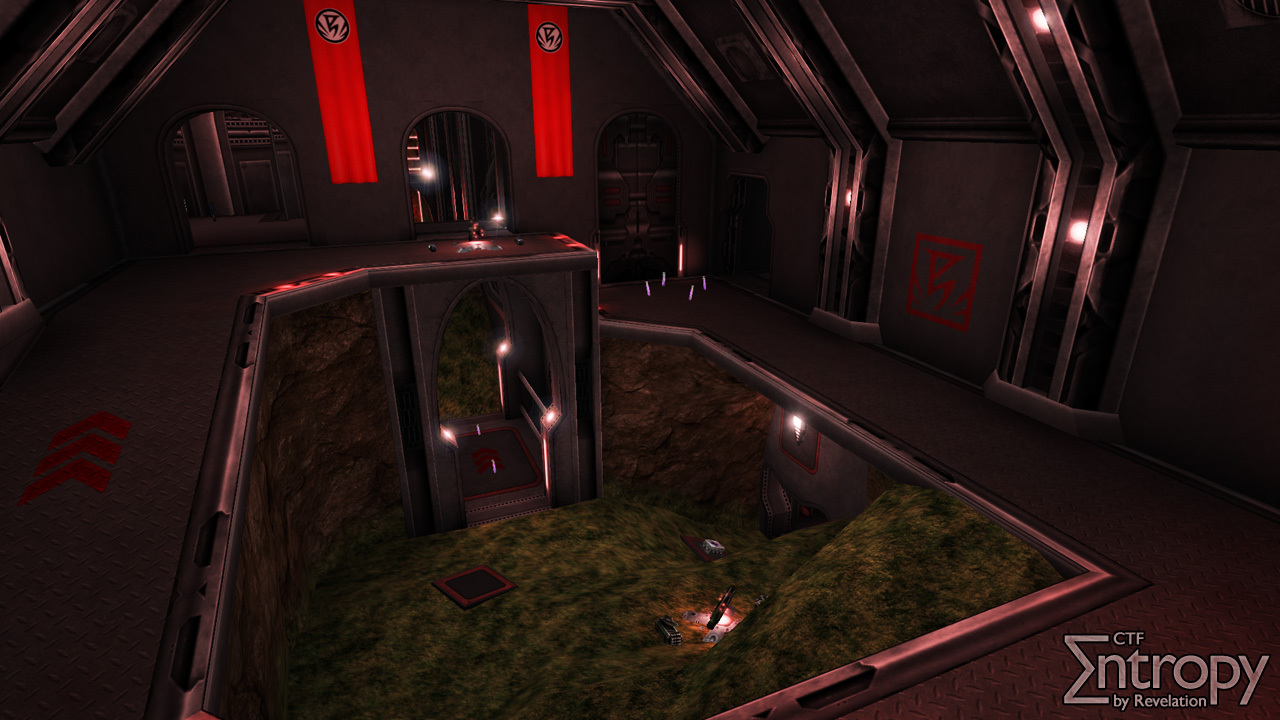 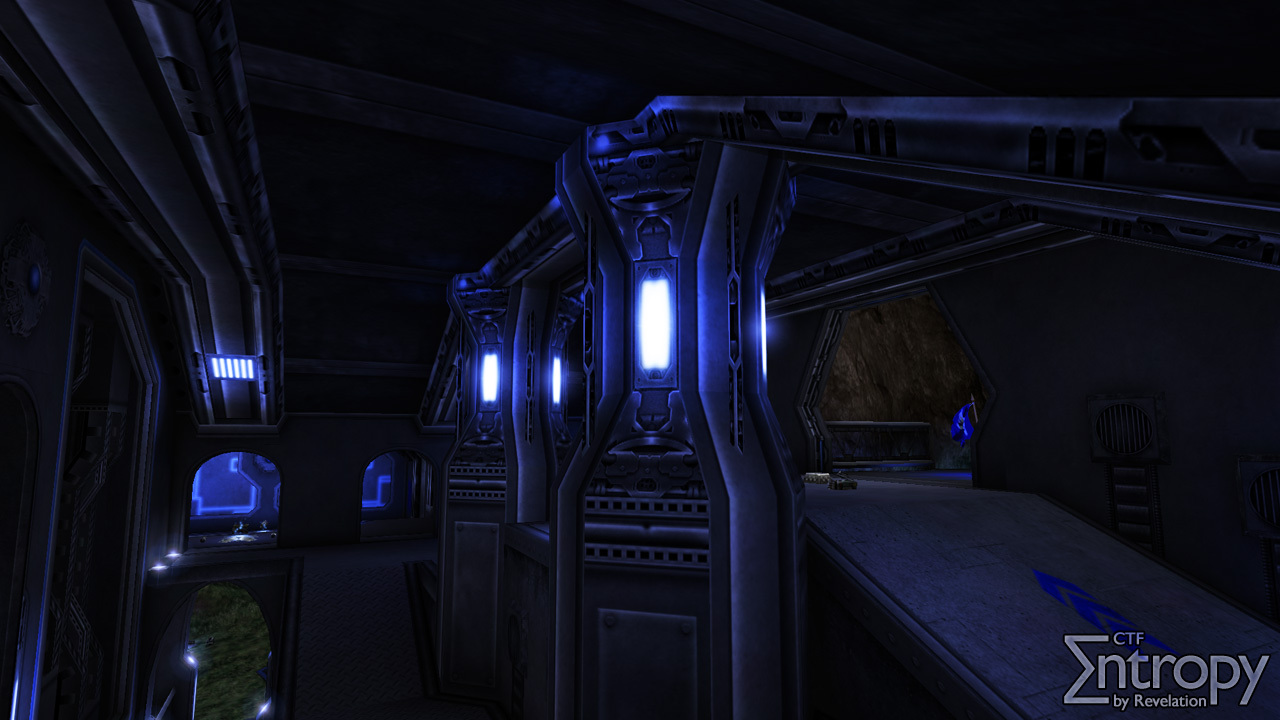 
PS: It seems I'm really getting old... Anyone got ideas where to upload a map nowadays?!

Mapraider is pending, if you know other mirrors, please tell me.
Last edited by Revelation on Mon Dec 28, 2015 6:59 pm, edited 2 times in total.
Top

Woah! I almost mistaken this for a 2K4 map! That's amazing! I really love the terrain. Everything is so detailed as well. Not that many sharp edges.(< probably why I thought this was a 2004 map)

I'll definitely check this out sometime.

Quick question: Does this map support bot play? If not would you mind if I or someone else added that support? I'm not home to check at this moment so It's best for me to ask.
"Woah what?! I wish I was recording that...."
Top

On a more serious note, stellar work as always. The lasers were a nice touch to block off certain routes for flag carriers although it feels a bit too limited to just have the right exit as an escape option, even more so as both the upper and lower route are connected to the next room, where defenders can gang up on you. Didn't happen all too often in my testrun, but noticeably happened so. Giving the prime defender a damage amp is hit and miss given that they were mostly using sniper rifles on me (and if not, then flak guns). It might probably overpowered if you'd correct the malfunctioning defendspots since I could sneak up several times on unsuspecting bots standing guard over the closed door since they don't look into the right or left corridor due to their narrow field of view. Also didn't notice the bots taking the upper route too often. You could try a higher desire value on the armor to make them use that route more often (welp, with the closed doors I didn't use it very often myself).
The playercount feels a bit hidden in the screenshots - why not simply put the recommended playercount in the known format?

As for uploads, yeah UT is dead. UTzone might still be open, and unrealplayground as well, but don't know how frequently people are visiting. One other thing: there's a small terrain contest running here... might gather a little more attention for your map there, and it'd be great seeing another grandpa of UT mapping there.

@Swanky: Believe it or not, I'm quite happy about how the defense points work.
I wanted to have a bot with amplified Flak frequently defending the middle entrance, otherwise it would be too easy to attack: Take the bridge, translocate to the flag. Repeat.
And I actually like the fact that you can sneak around the defending bot sometimes, as this encourages you to take different routes. As you say: If the Amp/Flak-defender overlooked all entrances, it would surely be overpowered.

About the flag room's "one way exit": Yeah, I know... I guess I f*cked up the layout there right from the start, and wasn't able to fix it later. Removing the lasers at the left passage (even if only for the teleport route) would make the way back too easy. Now one could say there are many CTF-Maps with only one way out of the flag base... But I agree, I should have thought about that earlier.

Btw, the playercount has also been part of my screenshots in Angeldust and Valkyrie. Why? Because I don't like UT's standard font.

That terrain contest looks interesting, but I won't have time to participate for sure. Might as well send in this map, as it should have enough terrain in it. However a five year headstart would probably get me disqualified.

...oh look medor already has a mirror for you


Anyways... what Swanky said, you're welcome to join in the contest with this map

Haven't had the time to play this one yet, but it looks fantastic, as usual. Blue base interior reminds me of Syrion a bit. Thanks for these continued, albeit delayed, releases

I hate all of you. You artistic-ability-having, good-spatial-reasoning, non-box makers. I hope you slip on your color palette and break your builder brush.

You don't know how jealous I truly am. It's like I work with crayons (the big ones that retards use) when you guys are using charcoal and Bob Ross paintbrushes. You just can't learn that, consider yourselves very fortunate.

<Grudgingly>: and nice map.
So long, and thanks for all the fish
Top

Downloaded it before heading to work today, so haven't had a chance to play it.

I wouldn't go that far. There's still a few mapping site that crank out new stuff, like http://www.mapraider.com/ · sadly I lost most of my links when I got the new computer.

Getting the flag felt a bit too easy. Maybe the assigned bot just had a low perception, but getting in her back 3 times out of 4? Really stupid defender. Tested on adept.
As for the TMC contest, Narean had been started around 3 or 4 years ago, the base line layout in the lowest level might be even as old the original FoT maps, and I still got it entered. Shouldn't be a problem to place it there as well.

Revelation wrote:First of all, don't tell me... UT mapping is dead. I know that. This is why I didn't release a map since late 2010...

UT mapping dead? There are still maps being made and people are still playing, I reject this statement! I refuse!
You must construct additional pylons.
Top

EvilGrins wrote:http://www.unrealkillers.com/forum.php - any map made for Siege still works in CTF

Not only. We also accept maps for BT, CTF for nw/insta and DM server! But you can post more like DOM and other and other ppl will get the map from there!

Cheeses Crust !!
Another of your unplayable* beautiful maps... I have to try it with BurgerCTF.

*at least on my old rig.

For the problem of a missing and working map portal ...what about, some of the staff member organize an index for all submitted maps here on our forum. I mean it's pretty quiet around UT99.org ...the staff crew has enough time for this

What a nice surprise! By looking at the screenshots, I wasn't too fond of the grass texture at first, but ingame I took a flak shell to the knee and I still wasn't sure if the grass really suits the map. I can't even back up my statement. Maybe I miss more details like grass meshes or small flowers or rocks. But I also see the reason why there's none: the performance. Maybe brighter grass would satisfy my taste more, so the color's contrast would be smoothened. Whatever... the alignment on the other hand is - as expected - top notch, and I'd like to have the patience you seem to have while doing that!

The most interesting part of the layout is the fact that the flag isn't just located at the very end of the main buildings, but on the side ways; something I needed some time to figure out since I could easily teleport there but I mistrusted the portals/beams later for their anti-flag policy. However, it's pretty fun to to navigate through the map. Hm, I'm in a too good-tempered mood to critise anything, so I will stop here for now.

I don't see a reason why you wouldn't participate with this map in the Terrain Mapping Contest. I guess you only have to apply the batch somewhere, if this is still being planned (looks at papercoffe inconspicuosly

Btw: Does this mean you still work on Bloordlord's Fane? :>

@UnrealGecko: Thx for the mirror, i'll add it.

@Swanky: From my experience on Masterful difficulty, I can sneak around the defender in about one out of two cases... Only until I grab the flag of course, then he WILL notice me.

@Dave: Yeah, you know, good grass textures in UT... That will never happen.^^
I even thought about deco meshes, but really, I don't like them in multiplayer maps... Not only do they destroy performance and gibt bots an unfair advantage. Also, depending on whether or not they have collision, they are either bad gameplay killers or completely unrealistic.
Bloodlord's Fane... What can I say... Nope. Really, that stuff is ancient. And it looks bad! I mean BAAAAD! I don't even know whe I built the first parts of it, but it must be at least 10 years now. And I was quite a noob back then.^^

Concerning the contest: I'm not gonna put a batch in, and I'm not gonna change the map name. Sorry.
That would just be stupid for a map that was already finished and published before I even heard about the contest for the first time. Guess I'm noncompetitive here.

Revelation wrote:Concerning the contest: I'm not gonna put a batch in, and I'm not gonna change the map name. Sorry.
That would just be stupid for a map that was already finished and published before I even heard about the contest for the first time. Guess I'm noncompetitive here.

Uhm... oh look! A huge HOM that's like in the middle of the map!! (no there isn't) You must make a V2 at once! Now there is no excuse for you not to enter the contest! Mwuhahaha! quick, someone find some more bugs please.