Tutorials and discussions about Mapping - Introduce your own ones!
10 posts • Page 1 of 1

Wow, updating an old map again? I edited this map in a bunch of ways and never uploaded the edit, figured I'd post the edit. Updated bot pathing, edited zones, changed a lot of brushes (mostly in the middle arena) to have semi-solid brushes instead of additive brushes, took some advice from sektor on pathing so bots no longer get stuck and SHOULD avoid acid pit in the center as well as have camp spots in spawn areas, also some textures have been adjusted. Screenshots came out pretty dark, but the map is a bit brighter than previewed.

Map description:
After Liandri Corp. had mastered subterranean teleportation, it wasn't long before viewers began to demand underground arenas. The moon of Zyklon C-13 was chosen for its consistent supply of corrosive byproduct, making for an excellent arena hazard.

11/15/20
I have a Hall of Mirrors bug in the Blue Base Entrance, could anyone take a look at that and give me some mapping advice on how to fix that? It seems to come and go randomly, otherwise I'd upload a screenshot.
You do not have the required permissions to view the files attached to this post.
Last edited by ANUBITEK on Mon Nov 16, 2020 1:58 am, edited 1 time in total.
<<| http://uncodex.ut-files.com/ |>>

I wasn't aware I had the previous version, and now I have both; renamed the new one. 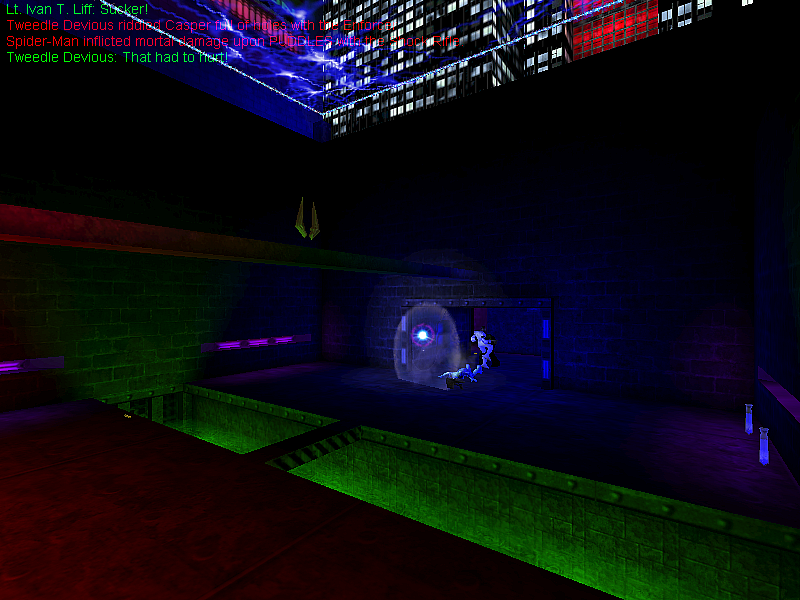 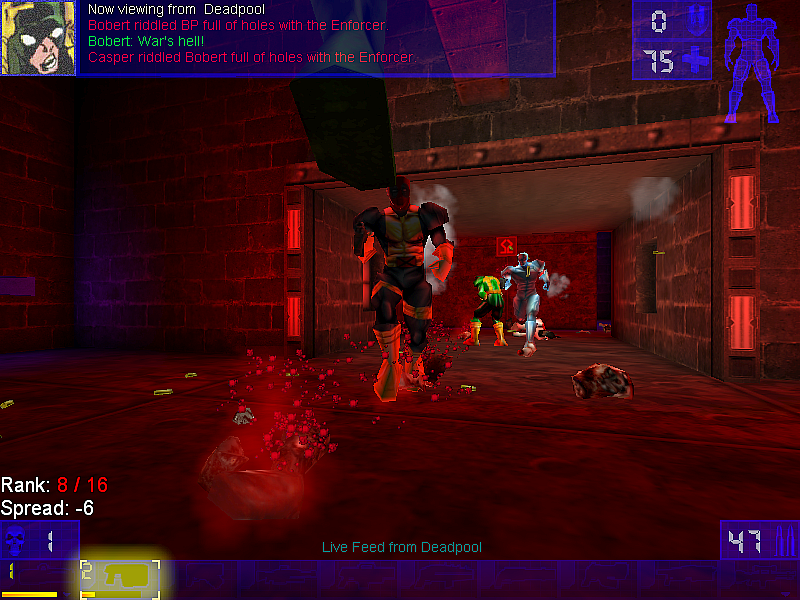 Both maps are really good, bots handle them great but never go upstairs on either one. The only real difference is the spawn room there's a pole in the center of it in the original and not in the new one, and the main battle area in the old is fairly open but the new one has an upper catwalk that's not on the old: 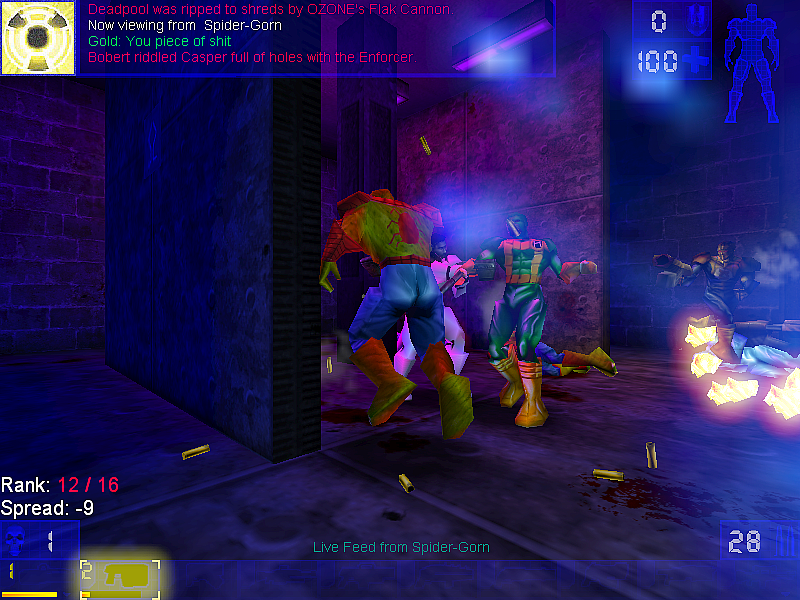 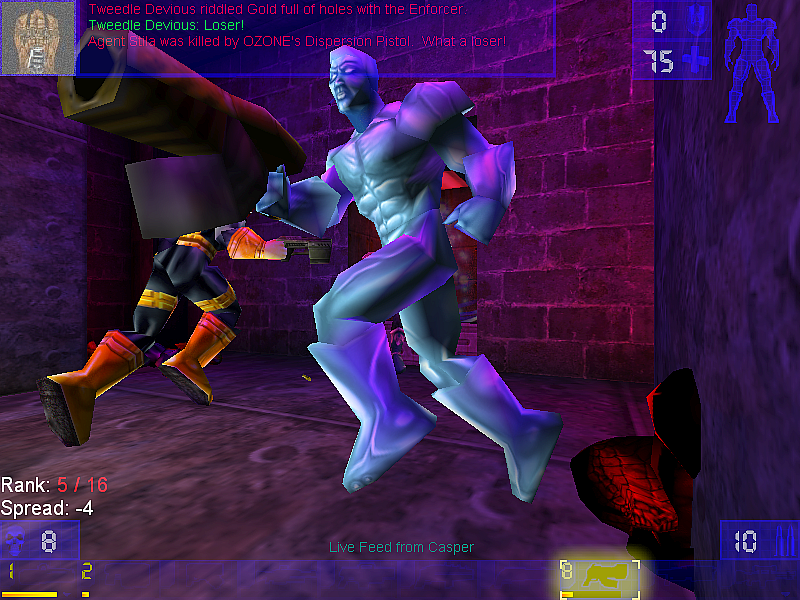 I did find one annoying thing (which I've seen on other maps too). You've got an energy field at the top of the map. Anyone in spectator mode that goes through it... 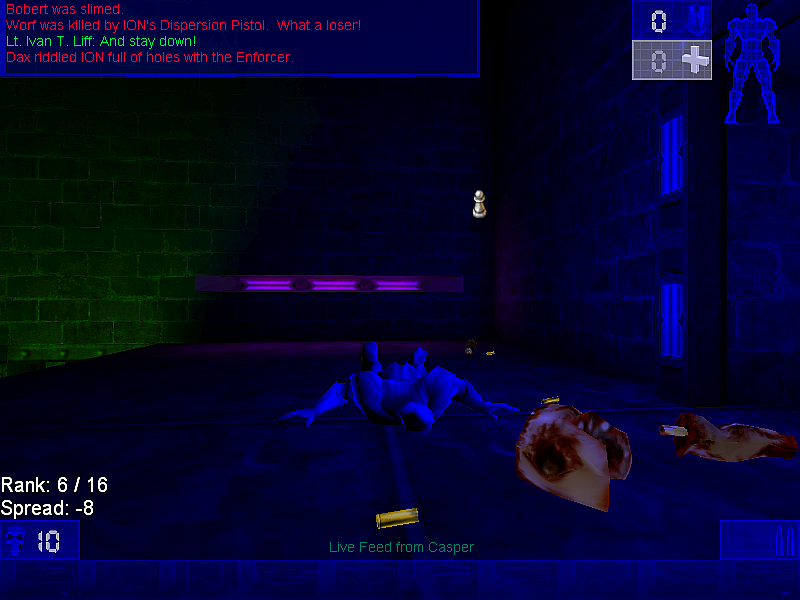 ...dies and has to respawn to keep being a spectator. Except the spectator is now a visible chess pawn the bots can NOW see and will shoot at.
http://unreal-games.livejournal.com/

Trust me, dump the original as it isn't as good as the new one. While I had fun making the sky box and city scape, it honestly just ate up brushes for scenery the player could just barely see. But I was unaware of the all-pawn killing zone, had no idea spectators were included. Also pawns are more likely to go to the second floor of the newer version when the game is 1v1 and not engaged in a fire fight. I only set up the navigation points for impact jumps and not transloc, so that is also partially an issue.

Also some of the added changes in the rooms include a bit more flak-friendly geometry and generally more mobility so more than 2 players can be on the map. If you'll notice, it is typically much more frequent that either yourself or a pawn will get stuck to a piece of geometry going around a corner in the original. I doubled the size of each room in this new version, for more accessibility and movement options. I might update with movers, but I wanted to balance the rocket launcher acquisition with a punishment to prevent too much camping opportunity. The cat walk is way more dangerous than it looks, with flak fire and other players punishing rocket pokes with streams of pulse energy.
<<| http://uncodex.ut-files.com/ |>>

You can remove those "PainPath" as long as are useless (doesn't have a single path through them).
Top

sektor2111 wrote:You can remove those "PainPath" as long as are useless (doesn't have a single path through them).

LannFyre wrote: Shall do. What are they supposed tk do anyway?

PainPath - is a LiftCenter. As a LiftCenter it has to be linked with at least 2 LiftExist types (which were crappy set in prior version - I recall it). Except the pain which I never used - I was adding such stuff LE PP LE in order to convince A.I. to jump from 2000 UU down-way (water at bottom) else a PathNode on Top won't get linked with a PathNode from Bottom when they have 2000 3000 UU using "falling". Even is placed away from ledge A.I. will get that path where they have to go + available for human too.

In this case those PainPath-s added have no purpose blabbering the battle - in random moments A.I. intend to retreat to a NavigationPoint out of enemy sight. You don't want them jumping like retards in acid, right ? There are rare occurrences like that but might happen, and then A.I. will look bad. Those ledges should be okay with FearSpot-s, custom jumpers, ect, rather than paths in death zones.

Take in account this is only what I'm thinking, not main rules, you can keep them or add more evil stuff.


EvilGrins wrote:Both maps are really good, bots handle them great but never go upstairs on either one.

Are they good or Never go upstairs ?
Let's see what we have: PathNode10, PathNode46, PathNode50, PathNode51, PathNode15, PathNode16 can be removed as long as those LiftExit are good - IF ARE IN default placement not pushed up at almost UNREACHABLE limit.
If fact all Navigation here is screwed for no reason - this doesn't improve A.I. In fact Map works properly with only 16 PathNodes.
Top

The "go to high and the map will kill spectators" thing isn't unique to this map. There's quite a few, even some recent ones, that do the same. Dunno why.

The bots handle the downstairs great, but never go upstairs; to be specific.
http://unreal-games.livejournal.com/

If you put jumpboots in there the bots will go up to the top.
Binary Space Partitioning
Top

+ if there is a line of sight from Le to Js Bot will use translocator when is available + ImpactHammer with correct setup.
It's wisely recommended for a JumpSpot to have a Trace-Line with all LiftExit-s involved - if we don't have a mover-lift involved.
Top

edit:
Oh hell, just realized I forgot to fix an issue where spectators get pushed when in the acid hazard, I'll patch that tomorrow.
<<| http://uncodex.ut-files.com/ |>>