Search and find cool Voicepacks, Sounds and Music or show us your own ones!
Post Reply
14 posts • Page 1 of 1

I updated recently ALAudio quite some, most welcome improvement for mappers I hope should be the ability to use EFX presets without breaking compatibility to non ALAudio users.
Its absolutely next generation and many steps from the ALAudio included in the OMP are between, also uses a separate thread for buffering which makes it slightly more performant compared to Galaxy as well. Enjoy

Changes:
Switched in OpenAL from FMod Music output to libxmp.
This player is not only free and open source (GNU LESSER GENERAL PUBLIC LICENSE), but better portable and is yet actively maintained unlike most other players. It also plays some tracker files "more correctly" than old FMod3. OGG playing is now done directly via ogg vorbis (BSD-License).

Added CrossFading ability in OpenAL when using MTRAN_Segue
Added ability to play sounds in OGG format (you need to rename the .ogg files to .wav to allow the import)

new in 1.6:
Yet another couple of minor fixes, improvements, code cleanups.

Removed ALAudio.u and replaced it with EFX.u
EFX.u is a pure UnrealScript package which does not depend on ALAudio, nor is ALAudio required for it to use. As EFX.u has the download flag set, a client can just download it for network play like any other package and if ALAudio is not used the ZoneInfo's sounds settings just simply have no effect. This change allows the mappers to make use of a huge number of environment presets (114) without taking the risk that people not using ALAudio can't play a map.

Notes for mappers:
* EFX.u packages offers a set of ready to use ZoneInfos to customize ZoneAudio settings.
* If you just custom defined ZoneAudio settings instead of using ReverbPresets consider
consulting OpenALs EffectsExtensionGuide.pdf especially in respect to default values and clamping.

Note that the usage of this version online can cause anticheat protected servers to kick you.

Really this is better than Galaxy?
I'll try it!


Smirftsch wrote:Note that the usage of this version online can cause anticheat protected servers to kick you.

What? This happens frequently?
Top

Worry not about AC, paging @anth.

Driver has been installed and looks very functional (after adjusting volumes). Thank you, SIR !

Yes unfortunately until a server admin white-lists any new addons, you will be kicked.
If your fave server does not like it, then you will have to point the admin at this post or at http://www.oldunreal.com/cgi-bin/yabb2/ ... 1399614690

I'm sure anth will get around to whitelist this for ACE.

FXANBSS wrote:Really this is better than Galaxy?
I'll try it!

Well, "better" - I think so, otherwise wouldn't do it - but in the end everyone has to decide himself of course.

I initially started with ALAudio because the "3D" in Galaxy3D audio never worked out for me, it just muffles a huge part of all sounds into center. So the most important point for me was correct audio positioning, so that you can really hear where your opponents are. That again works best with 5.1 speaker setup or since this version with HRTF and good headphones. Also the more than limited reverb system in Unreal/UT bothered me quite some, so for the mapper its really easy to chose the wanted ambient out of a drop down menu from the EFX extension. Later then support for OGG Music and due to making also a DeusEX port I added mpg123 and finally since I like it, FLAC for sound.
Top

Ok... all fine but my game is crashing.
I need to press ESC quickly in the intro or the game will crash for a unknown reason.

My UT is using ALAudio as you see here:

Here is my configuration:

Hopefully we can finally wave goodbye to oversized, poor quality mono WAVs in UMXs.
Personally I am just happy I can use my old Octamed collection

FXANBSS, bug reports would be better posted at OldUnreal.
Look at you UT log file and see what it crashed on.

If you fix the extra " in the int file it will list properly and you can check with UEd that it is installed correctly.

If it is not functioning, when you try to open the "ALAudio" section at the top, it will crash the renderer with an error, but should not crash UEd. 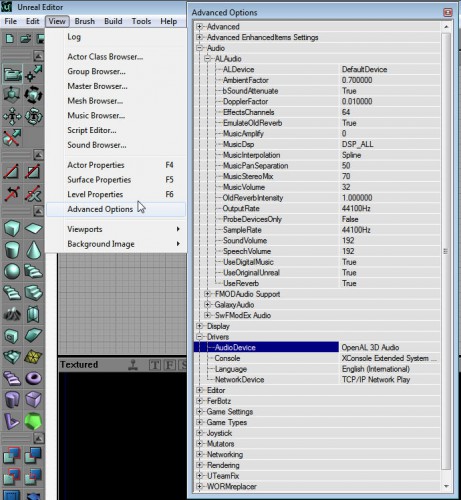 should be whitelisted soon...
Top

FXANBSS wrote:Ok... all fine but my game is crashing.
I need to press ESC quickly in the intro or the game will crash for a unknown reason.

As Doc said already, the very least required is a log of the crash.

@ Doc: Oops. I fixed the int in the package

I have started a windowed game in order to see server's console remotely (looking for an isolated MBot issue) client crashed and a M$ message was showing (that specific sorry for inconvenience...), Audio card is an on-board Realtek on a HP machine not something added in a garage.
Top


Version 2.2 for UnrealTournament, Windows version.
Auto matching of libxmp samplerate, updated some check in libxmp 4.3.9 to re-enable support for some obscure tracker file, updated to OpenALSoft 1.17 with HRTF (new ini settings Autodetect/Enable/Disable). Autodetection may only work with USB headsets.

BTW. Smirftsch the int file in this version includes the extra "
Better remember to fix the ones in your installed games also, or it may creep back again.