Maps, mods and resources ported from or to Unreal.
Must run in UT99 or with Oldskool Amp'd.
Unreal 227 only projects are "Off-Topic"
Post Reply
15 posts • Page 1 of 1

As the title says but it runs even on UT. Don't expect the menu to work there unless you copy certain things from a config file on Unreal.

If you just open the map wolfalpha it automatically runs wolf3d.wolfgameinfo.

There is a hidden area though with a "concert".

Is there any way to run other maps with Wolf3D other than wolfalpha.unr (in Unreal)?

Also fun that one can have the sprite pawns in UT as well, should one want.
Top

They don't work too well online though those pawns, tried them. But either way you can of course run the regular unreal maps or anything else with the gametype, either create int file for wolf3d.wolfgameinfo or open dig?game=wolf3d.wolfgameinfo to get something similar like I showed in that video. If you read the readme file in system the original, you can see the plan was to make a custom campaign not just recreation of wolf3d level(s), but the person responsible might not have finished it. It's hard to tell, the only way I have gotten this mod is from old GameStar magazine CD, all the old sites this was hosted on are down and weren't archived.
Top

Leo(T.C.K.) wrote: ↑
Mon Oct 12, 2020 10:36 pm
But either way you can of course run the regular unreal maps or anything else with the gametype, either create int file for wolf3d.wolfgameinfo

I did try that but the Wolf3D game didn't show up - then I thought there were possibly too many gametypes in the botmatch menu so I commented out a few UPak gametypes and, sure enough, it showed up. Takes a bit of getting used to the movement 'controls', haven't really got that set up properly yet but it works OK.
Top

That was interesting, and I got to shoot the doggies again!

Rather than launch it as instructed, I opted for the Single Player gametype I have which gave me the option to use mutators... was very tempted to go in with Nali Weapons 3 but opted for the Goa'uld Staff Weapon instead.

Possibly because I went in the way I did is why when I got to the end of the level the elevator didn't go anywhere. So I had to Cheat Code into Ghost Mode to find where the elevator was supposed to bring me.

Was a little worried about posting screenshots given the WW2 theme... do I need to remove a couple of those? 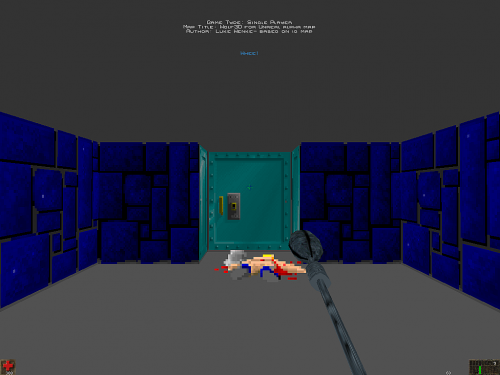 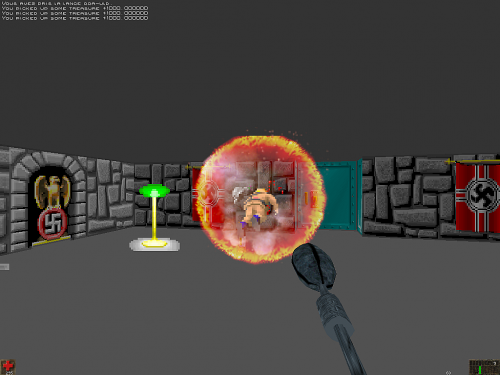 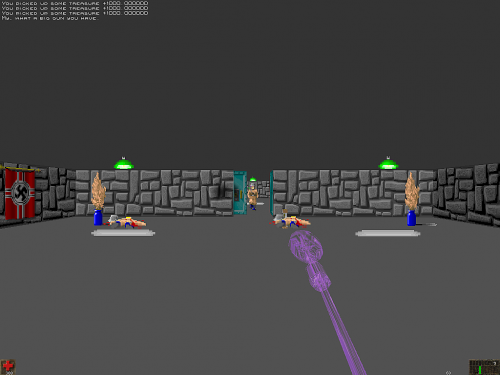 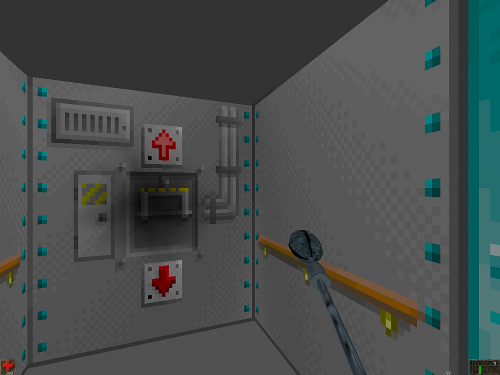 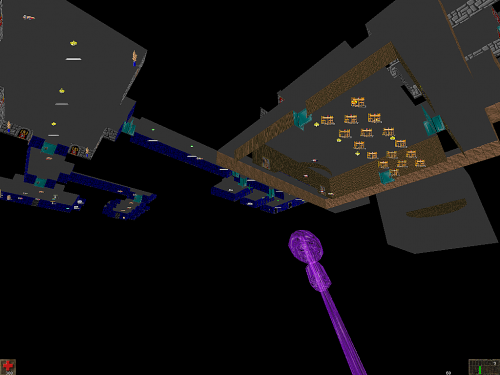 What's the problem about the WW2 theme? If we censor something that's supposed to be taking place in WW2 then we are actually closer to denying holocaust, this is why I don't agree with Bethesda's censorship of modern Doom releases as those levels were secret easter egg but there's no precedent to censor it. There's also no precedent to censor things like the health items. In fact the latest version is the worst because the symbol used means something like treatment for radiation sickness and not a first aid medkit. The red cross doesn't have the ultimate right to use this symbol, it is nonsense and the people who propagate those changes are absolutely insane.
Top

EvilGrins wrote: ↑
Tue Oct 13, 2020 5:58 am
Rather than launch it as instructed, I opted for the Single Player gametype I have which gave me the option to use mutators...

That way you just play the map rather than use the full mod, including the HUD, which turns the game into the full Wolf3D experience.

Umm .. that's really overkill, given the low health of all the sprites - the dogs have 40 for example.
Top

For completion/archival sake I am also posting the unmodified exported scripts from the 220 version. In case I messed up with something. The rest of resources can be exported by yourself if you want, but not a lot of people have 220 version or can run the editor for it (I could only run that editor thanks to the alt. version coming with the unreal psx resources).

Umm .. that's really overkill, given the low health of all the sprites - the dogs have 40 for example.

A number of the folks in this forum are German and they've made it clear over the years they don't like Nazi symbols... which is understandable.

I usually strive to avoid them, but I wasn't initially paying attention yesterday.
http://unreal-games.livejournal.com/

EvilGrins wrote: ↑
Tue Oct 13, 2020 6:07 pm
A number of the folks in this forum are German and they've made it clear over the years they don't like Nazi symbols... which is understandable.
I usually strive to avoid them, but I wasn't initially paying attention yesterday.

The Swastika which the Nutsies used is a forbidden Symbol in Germany and the game is also indexed here.
Therefore, because the owner is German and it needs only one asshole to get him into trouble, please refrain from posting pictures of the Swastika.

You can easily change them with other shots from that mod.
-=: http://jokercologne.deviantart.com/ :=-

I don't think screenshots of something like that can get someone in trouble. And if so I'd like to have a word with the trouble-maker.

There's a difference between propaganda of nazi stuff and this. The symbols are banned due to fear of propaganda. That was at least the initial idea. Now it's getting twisted to something else.
Top

Debatable, but either way it offends people (myself included) so I strive not to offend them.

So this is the last from that... and I must say, there's like nowhere on the map you an throw a brocconade and not get killed. 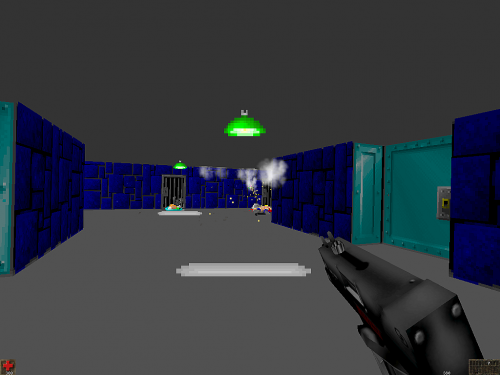 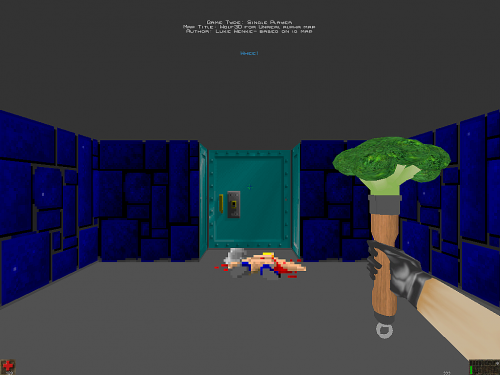 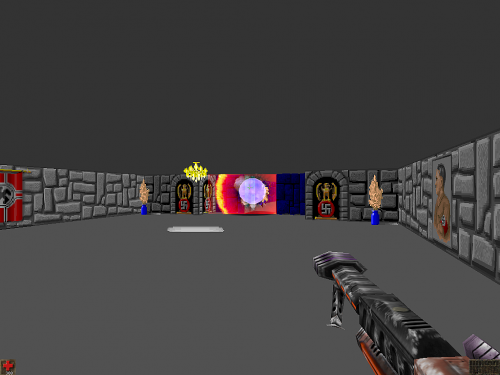 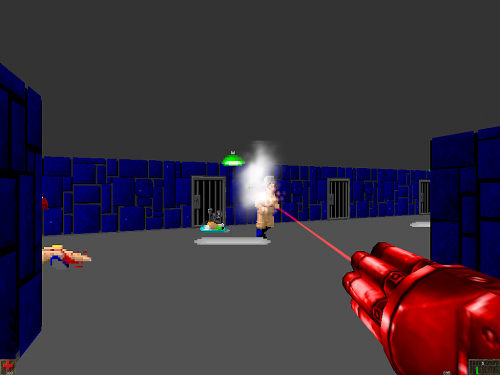 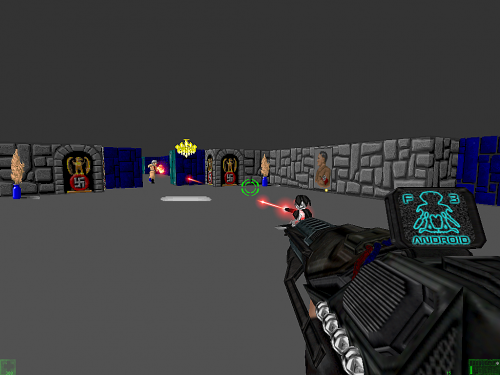 Debatable, but either way it offends people (myself included) so I strive not to offend them.

If a video game containing national socialist or otherwise extremist imagery offends you, the best way is:

[ ] enforce censoring the content
[X] ignore the game as you're clearly not the target audience.

When I download Wolf, I want to shoot Nazis. NAZIS. I want to shoot them in the faces. Not some "wolf cult" bullshit or anything else. Besides. Censorship is wrong. Period. I can't believe it's up for debate.

Here's a hint for those it offends: turn the page. Walk the other way. Do not enforce your feelings on others.
Top

Totally understand that, and as I skin it has presented a hardship because I've more than once thought about skinning the Male Soldier model with skins based on the old Wolfenstein baddies.

There's an existing skin called the Russian Soldier which would be easy to convert to the blue suited baddies or the white suited ones, same basic uniform style...

Closest I ever came was the HYDRA skin from Marvel Comics, as historically Hydra was born out of... well, them.

Even tried a Red Skull skin once, a couple months ago, but it didn't turn out well. May go back to that at some point.

But as to more Wolfenstein themed skins, if I ever did it I'd change the red armband's symbol to a mean smiley face.

EvilGrins wrote: ↑
Fri Nov 13, 2020 3:16 am
But as to more Wolfenstein themed skins, if I ever did it I'd change the red armband's symbol to a mean smiley face.

This would be much appreciated and also hilarious.
-=: http://jokercologne.deviantart.com/ :=-