Maps, mods and resources ported from or to Unreal.
Must run in UT99 or with Oldskool Amp'd.
Unreal 227 only projects are "Off-Topic"
138 posts

This shall be the final patch before full release. Lots of tweaks and critical fixes for 225/ut. Recommended

Also 227 Emitter effects for e1l8a by yrex. This was forgotten with the main e1l8 release.

I apologize for the inconvenience with so many patches before and that I wasn't able to properly test everything due to my personal situation.

This server could not verify that you are authorized to access the document requested. Either you supplied the wrong credentials (e.g., bad password), or your browser doesn't understand how to supply the credentials required.
Top

Leo(T.C.K.) wrote:
I apologize for the inconvenience with so many patches before and that I wasn't able to properly test everything due to my personal situation.


Np man, work is work and it's damn much appreciated!
Thanks for the patches till now, and I can only wish you goodluck on the whole RL situation.

E1L5D1 seems to can only start once (online) for 1 player.
Whenever a second player joins, the server-log shows:

It looks more like one of them is close to a wall or something like that, I can't investigate why this happens now or why I missed it, due to events that struck me. Here's posts yrex quoted elsewhere:

Thanks for the message and the download!!
I wish you lots of goodluck and good health Leo.

thx. I do have plans/things set for future but it has to wait a bit, after all I was supposed to be in hospital by this point.
Top

I've played some of these and I think they are really cool - good layouts and textures, great atmosphere and some interesting surprises - nice to see the lavaboots being put to use (I'd forgotten they come with a piece of armor as well) - so many thanks for making these available and, echoing esnesi, good luck and good health!
Top

Hoping to play these when I can, take care of yourself Leo, ok?
My work for UT99: Counter-Strike VP, MaleOne+ & FemaleOne+ voicepacks, DM-XC-NaliTreeV2 (from the 2012 Xmas Contest mappack), (NEW!) DM/DOM-20AC-CastleGeorgeV3 (from the 20th Anniversary Contest mappack)
my small spec of files at Google Drive

I'll actually release UPSX E1P2 Full tomorrow, with the updated text file and updated olskool description. Err, I mean the fil with the o. I don't know what I'm writing, too exhausted. upsxpack.u I mean, I updated it earlier today when I was brierfly home. I meant to do that back then.

I might as well update this thread since I haven't posted an update here and it's supposed to be the main upsx thread.

I will post here the latest release instead of making a new thread.

The extra dm map for unreal will still receive an update/fix but this is the main release already. Maps from L1 to L3 for now as the others still require a lot of work and given my uncertain life situation I can't promise when the next will be especially if I can end up on the street.
Top

I finally had some time to upload this EP2 on the server.
Frgn awesome man, and thanks again for all your work around releasing these recovered jewels!

I never finished a unreal/ut campaign, and iam afraid i never will.
But for some reason, i do have the patience to play these beauties and find things out.
And awesome music!

Btw, am i still up2date with map releases?
I scrolled through the thread and modbb, seems complete.
(excluded the DM(U) and others)

Yes that's correct. I'm releasing a hotfix for the dm map in the meantime, there was bsp hole and now there are also new dynamicambientsounds.. 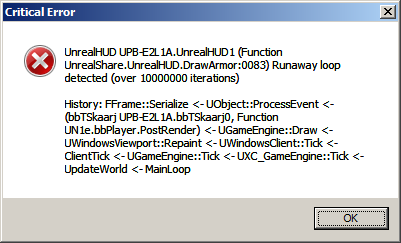 Reproducable for me by picking it up, and switching to it immediatly.

*Could be a conflict of a few things that are active in the background on the server, but posting to be sure.